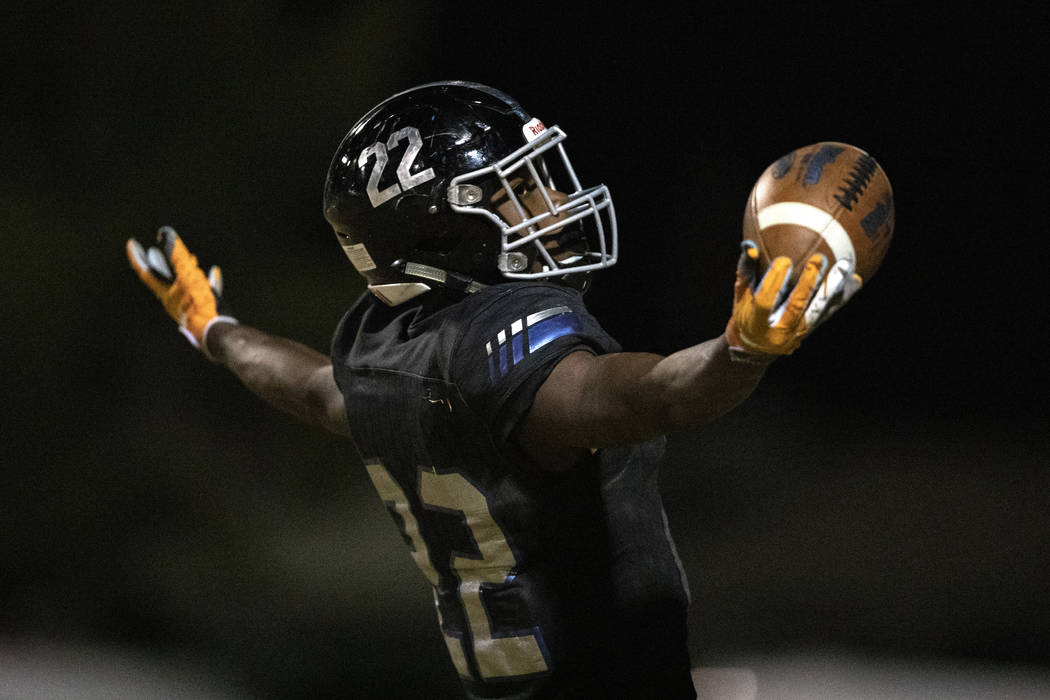 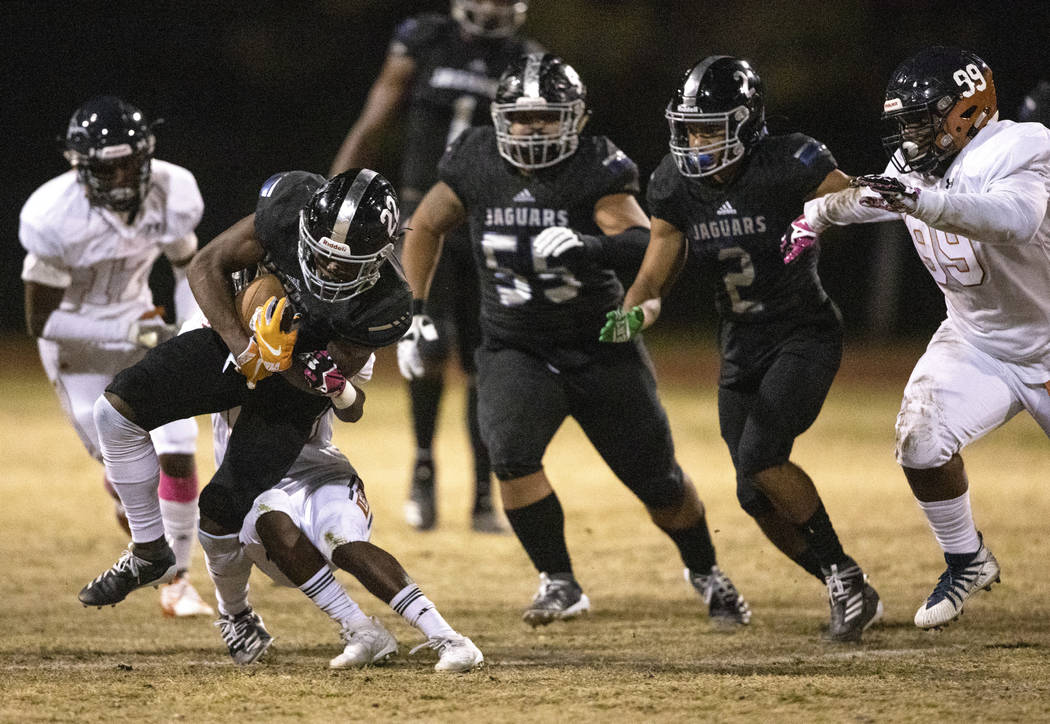 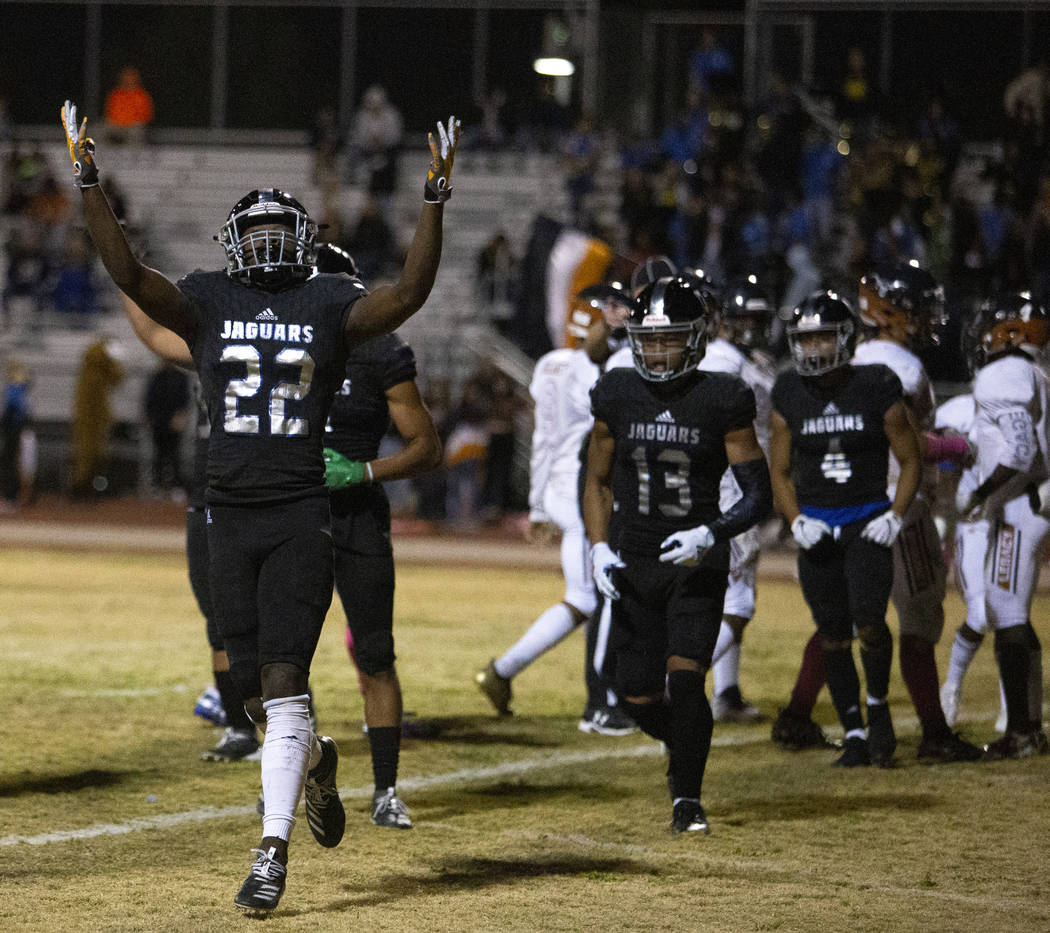 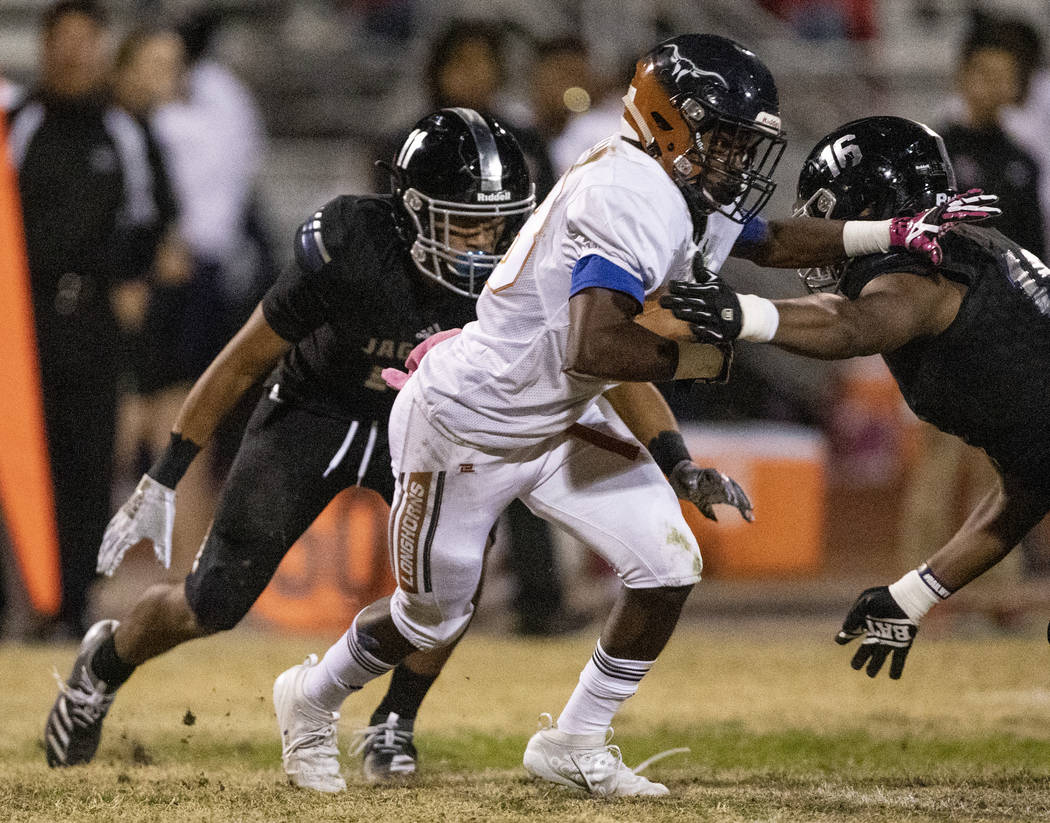 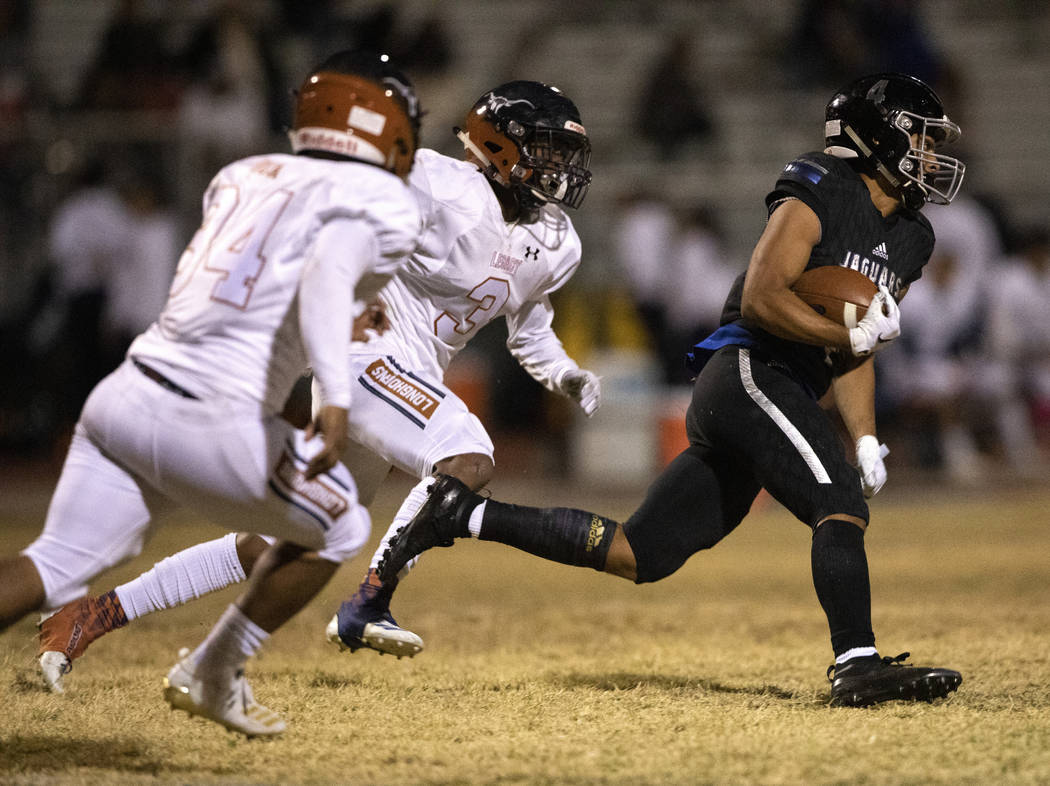 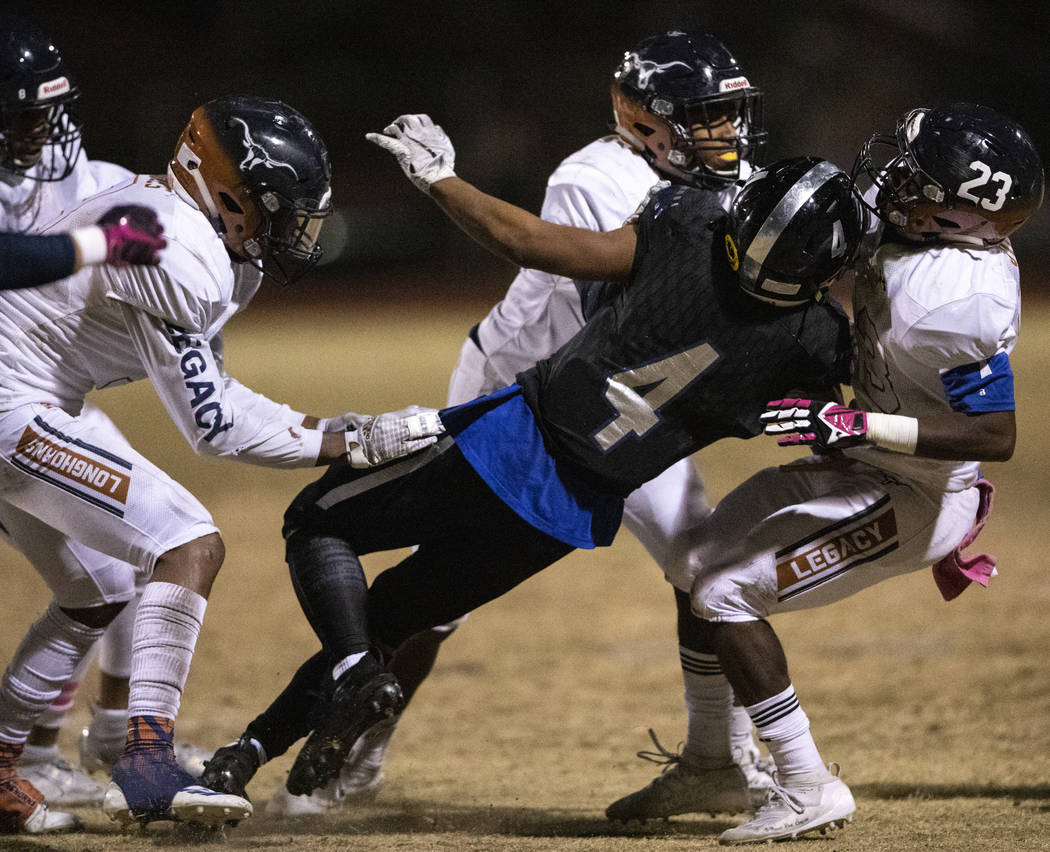 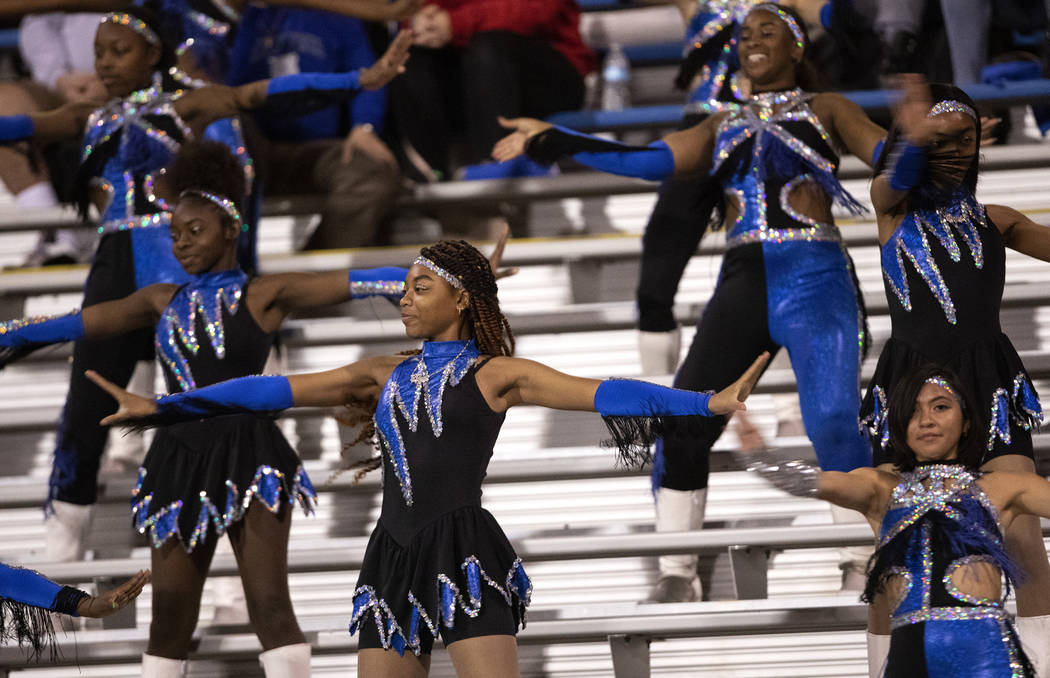 After six straight comfortable wins to start the season, Desert Pines found itself tied with Legacy in the fourth quarter Thursday night.

Jovantae Barnes and a swarming defense made sure the Jaguars stayed undefeated.

Barnes rushed for 122 yards and two touchdowns, including a 29-yarder up the middle with 9:26 remaining, and the Jaguars stopped Legacy on fourth down in the final minute to escape with a 21-14 homecoming victory.

“We needed to get tested. We wanted to see our grit,” Desert Pines coach Tico Rodriguez said. “Legacy always plays us tough. They’re a great program, tough kids, and they came out to compete. We knew we were going to be in a battle, and we were tested.”

Rjay Tagataese was 21-for-30 passing for 288 yards for Desert Pines (7-0, 3-0 Northeast League). Branden Thomas caught seven passes for 108 yards and a 5-yard touchdown that gave the Jaguars their first lead of the night in the third quarter.

Legacy quarterback Evan Oleas was 15-for-30 for 191 yards. He threw two touchdowns to Aaron Holloway and two interceptions.

Holloway’s first touchdown opened the scoring in the second quarter on a fourth-down pass from Oleas, as he ran away from his defender on an 18-yard slant. His second was a 65-yard catch and run that tied the score 22 seconds after the Jaguars went ahead in the third quarter. Holloway had nine catches for 159 yards.

“He’s special. We knew he was going to be a problem all week,” Rodriguez said of Holloway. “They took advantage of a couple coverages we shouldn’t have been in, and he exploited us. He’s a tremendous athlete.”

Barnes’ game-winning run capped a 96-yard drive that took six plays, including a 44-yard pass from Tagataese to Thomas on a third-and-8 from the Desert Pines 11. Barnes tied the game with less than a minute left in the first half on a 10-yard run.

“He’s only a sophomore, and he shows his talent,” Rodriguez said of Barnes. “He’s showing why he’s getting all of this attention from Division I schools.”

Legacy (4-4, 1-2) has had chances to knock off both undefeated teams in the Northeast League. The Longhorns had a 14-point lead in the fourth quarter against Las Vegas before letting that one get away.

Desert Pines fumbled on its first three possessions, but Legacy was only able to cash in the last one. The Longhorns also had a short punt that set up the Jaguars’ tying score before halftime.

“One of the big situations that was really disheartening was there was no pressure on that punt,” Legacy coach John Isola said. “Evan (Oleas) is a punter because it gives us a dual threat back there. He’s never been a punter before, but that gave them field position.”

The game was marred for Desert Pines by Darnell Washington, one of the nation’s top recruits, being ejected from the game. Washington slammed his helmet to the ground before leaving the field in the fourth quarter.

“He just lost his composure, and we’ve got to figure out what we’re going to do with him,” Rodriguez said. “We don’t quit on kids, and that’s our motto, but definitely that’s not what we’re about.”