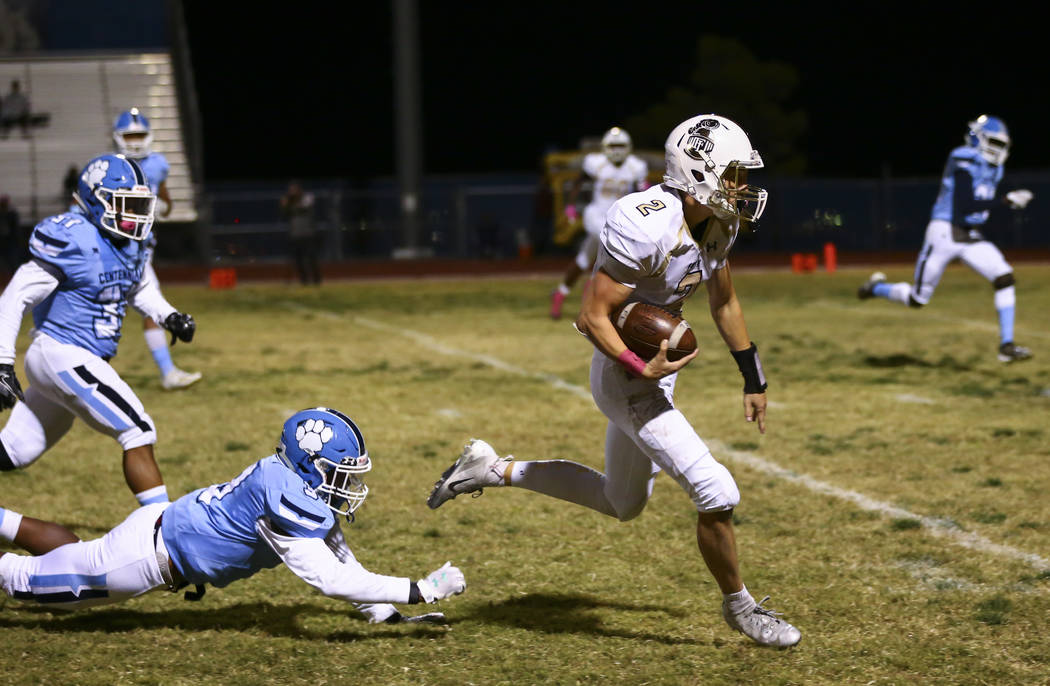 Faith Lutheran's Riley Schwartz (2) runs past Centennial's Donte Washington (3) on his way to score a touchdown during the second half of a football game at Centennial Hills High School in Las Vegas on Friday, Oct. 11, 2019. Faith Lutheran won 24-20. (Chase Stevens/Las Vegas Review-Journal) @csstevensphoto 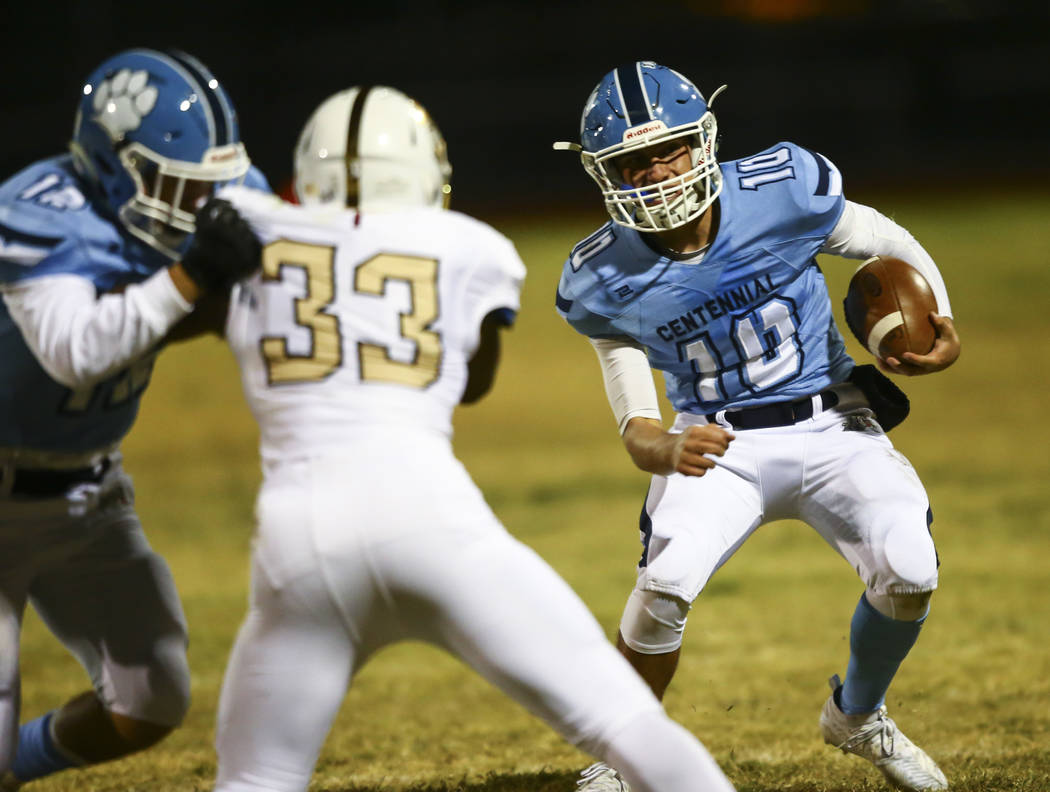 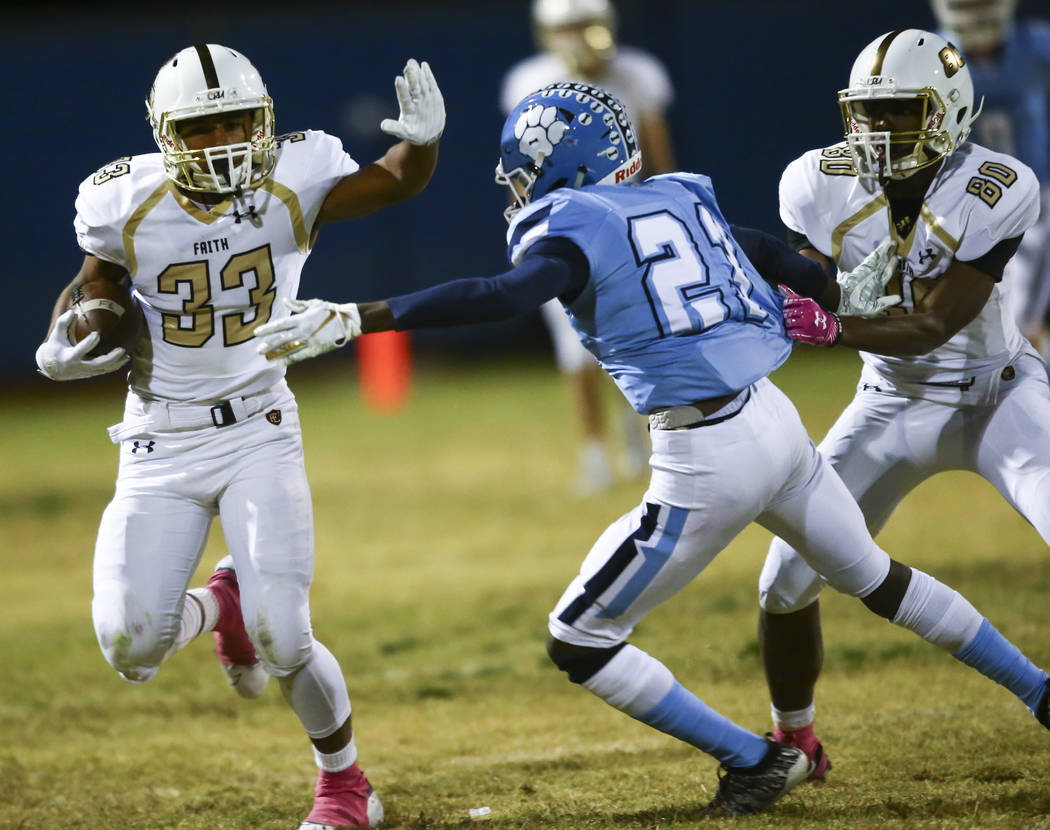 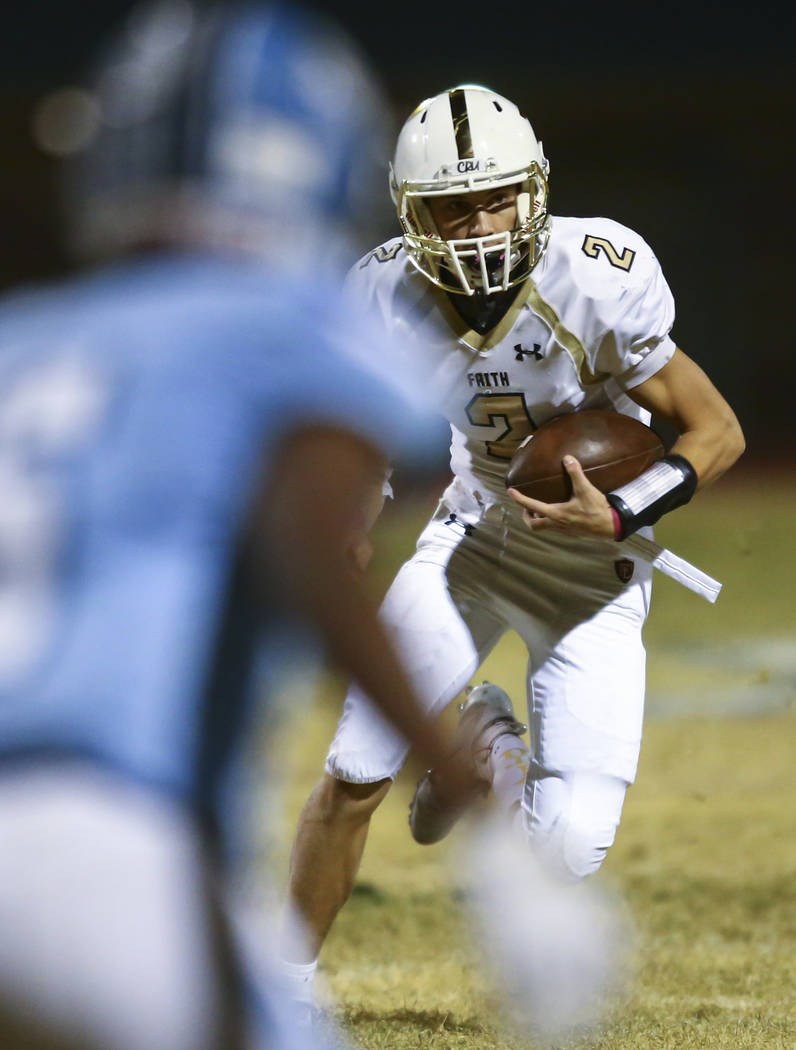 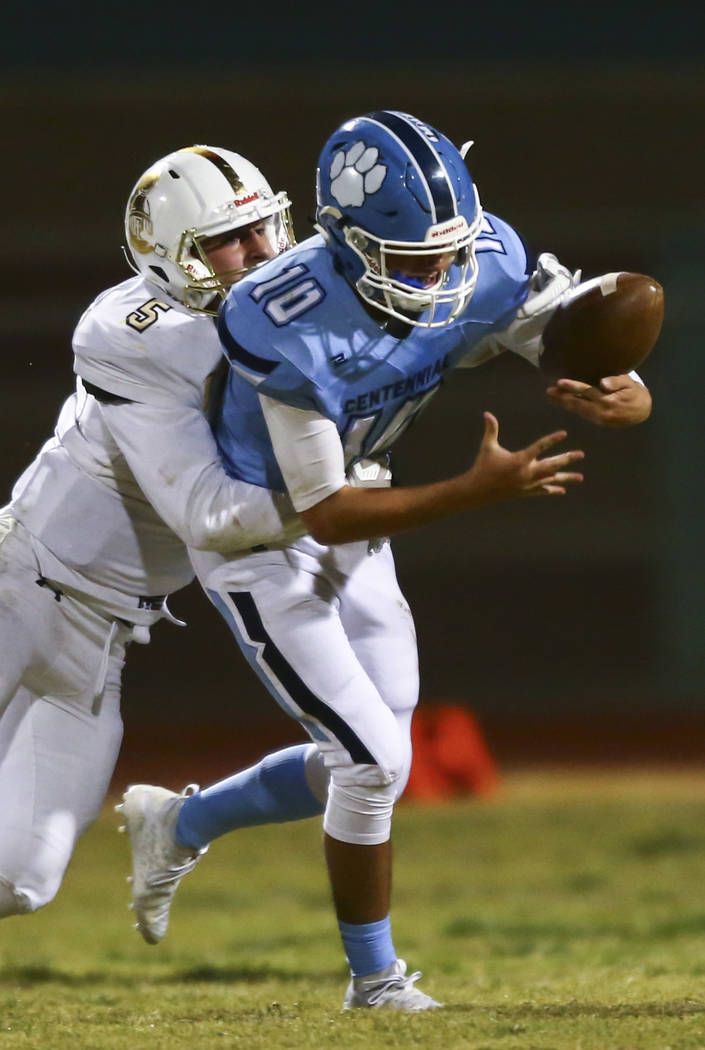 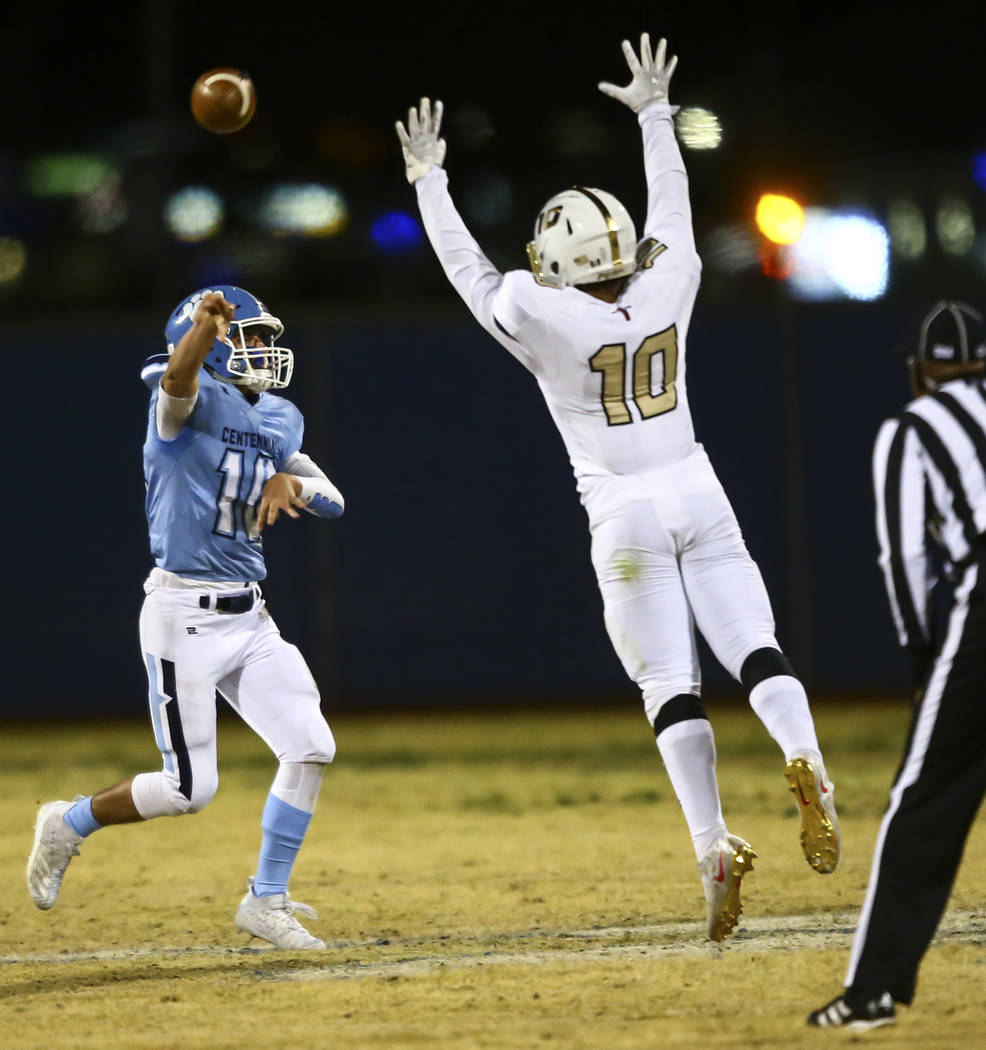 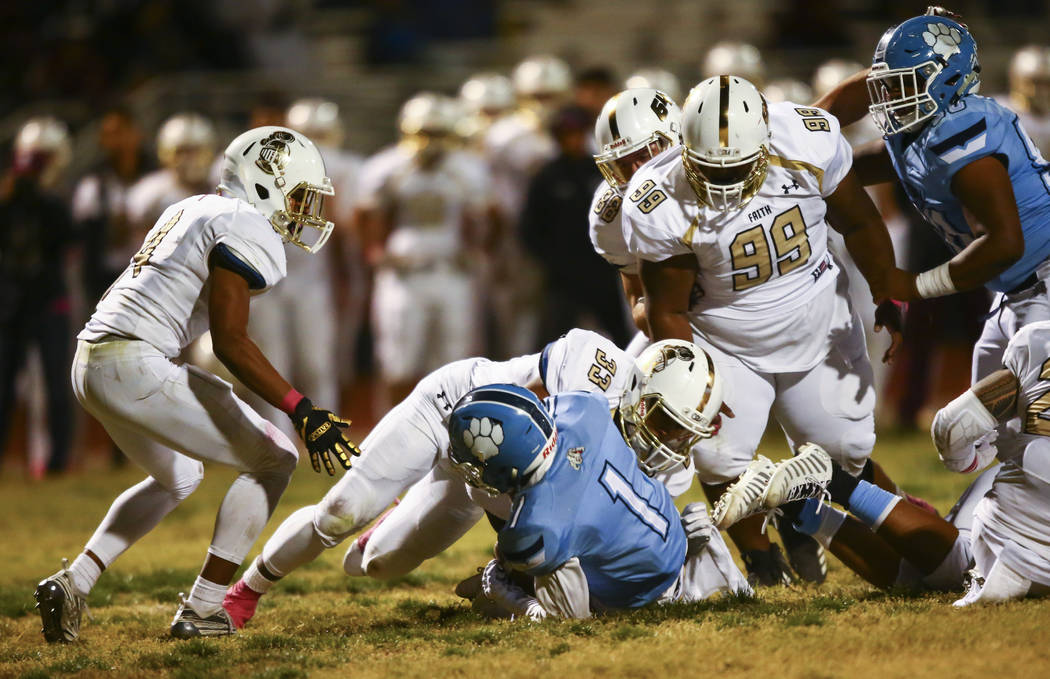 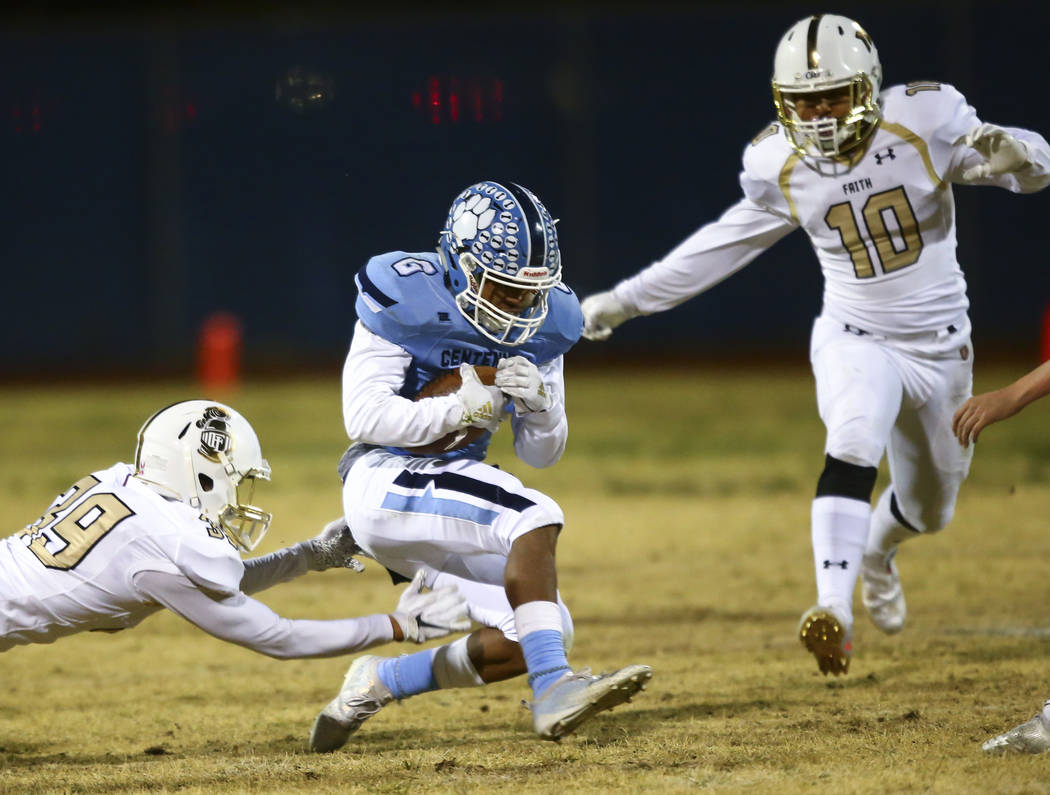 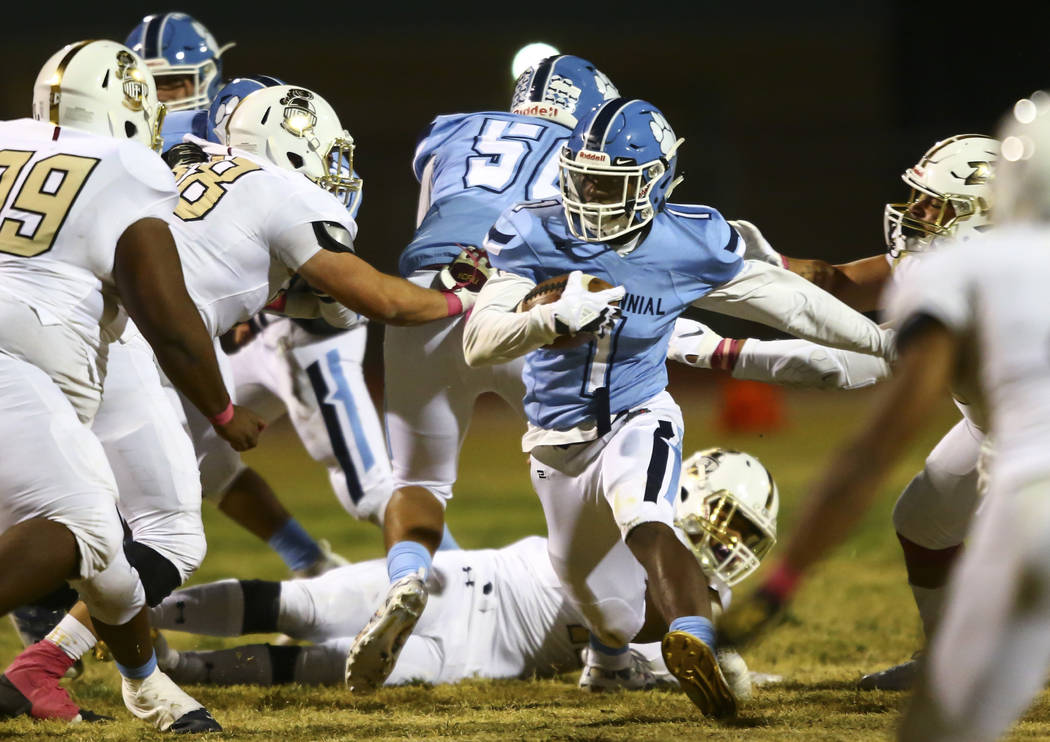 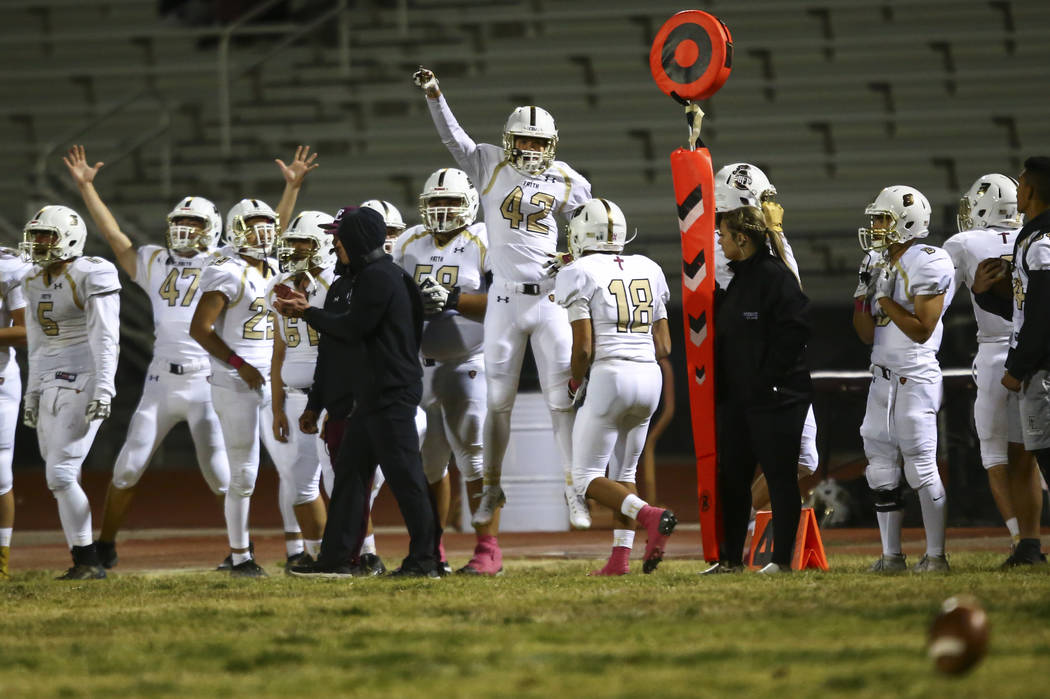 He will be the first to tell you, there’s no quarterback controversy in the Crusaders’ camp.

Senior Riley Schwartz came on in the second half, and engineered a pair of scoring drives as Faith Lutheran stunned previously unbeaten Centennial 24-20.

“We do a terrific job of communicating with our players about what’s going on,” Fox said. “As a coaching staff, we decided to make the change, because we want to do everything we can to put us in a position to win. All we care about is getting the ‘W,’ no matter how we get there.”

Schwartz entered the game following Centennial’s first drive of the second half, which resulted in a score. The Bulldogs marched 65 yards in 12 plays capped by a Colton Tenney 8-yard pass to Nate Conger and Centennial led for the first time at 20-14.

In fact, that would be all the scoring for the Bulldogs (5-1, 1-1 Northwest), as Centennial gained just 71 yards the remainder of the game.

Faith Lutheran (3-3, 2-0 Northwest) took advantage of a special teams play by blocking a punt, and the Crusaders were in business at the Centennial 31.

Seconds later, Schwartz put the visitors ahead for good.

The senior quarterback called his own number, broke two tackles and raced 31 yards for the touchdown. Alex Khachoyan added the PAT, and the Crusaders had a 21-20 lead with 2:31 remaining in the third quarter.

However Centennial did have one final chance, and moved to the Crusader 49. But Tenney threw four straight incompletions and Faith Lutheran earned the big league road win.

“It’s all about grit,” Fox said. “We preach about starting great and finishing strong, and don’t be concerned about how it looks. At the end of the night, we want to be 1-0, that’s all the matters.”

Faith Lutheran got on the board first, as starting quarterback Grant Wood hit Peyton Thornton on a 35-yard scoring pass.

Marcos Canales, who led Faith Lutheran with 50 yards on 21 carries, scored on an 8-yard run early in the second quarter, extending the Crusader lead t0 14-6. But the Bulldogs got the final score of the half, as Aaron Johnson scored on a 5-yard run, and Centennial was within 14-13 at halftime.

Tenney completed 14 of 29 passes for 196 yards, with Robinson hauling in six grabs for 88 yards for Centennial. But Tenney was sacked seven times by the Crusaders defense, which alllowed only 67 rushing yards.