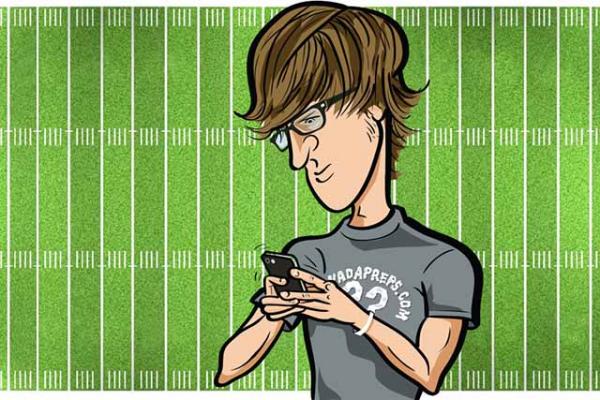 I’m feeling much more chipper this week. Not only did I return to eating solid foods, the calendar flipped to November, which means I finally can whip out my Jim Mora voice.

“Playoffs?! You kidding me? Playoffs?!”

I know, I know. The Division I Sunset Region regular season hasn’t finished, and Arbor View and Palo Verde still need to settle the Northwest League title Friday night. But every prep football fan should listen to the sound bite from the former Indianapolis Colts coach at least once at the start of each November.

All “diddly poo” aside, this should be an intriguing postseason, especially in the Sunrise Region. Shoot, the No. 4 seed from the Southeast League (Foothill) has a better overall record than the No. 2 (Basic) and 3 seeds (Coronado). Not saying the Falcons are better, just that it’s, oh, I don’t know, quirky.

Plus, Green Valley and Liberty are on a collision course to meet in the region final, where they could put up 100 points combined. And I wouldn’t mind seeing that.

I almost had my first perfect record last week — maybe if I studied that hard in geometry class I wouldn’t have a C-plus — but 7-1 is no joke. In fact, I’m in such a good mood that I’ll even throw in an extra game this week.

Palo Verde at Arbor View — For the second straight season, these teams are 4-0 in the Northwest League and meet in the regular-season finale with the outright title at stake. Schedule maker, for the win!

The Aggies are the reigning league champs and have allowed seven points in their past four games. Seven. I don’t care if you’re playing “Madden” online against an 82-year-old Cleveland Browns fan with six fingers who lives in Guam. That’s still an imposing number. … Arbor View by 5.

Legacy at Centennial — I know you’re thinking it, so I’ll break the tension and put it out there. This game is important for one reason: The winner earns the No. 2 seed from the Southwest League and avoids traveling to Arbor View or Palo Verde for the first round of the Division I Sunset Region playoffs. That’s it.

I know that’s kind of a slap in the face of Shadow Ridge, the winner’s opponent in the postseason opener next week. But what’s that phrase all the girls are saying these days? “Sorry I’m not sorry.” … Legacy by 6.

Las Vegas at Basic — Nothing to see here. Move along. Just your standard 2-versus-3 matchup in which the No. 2 seed is 4-5 overall and the third seed is 5-4. This kind of stuff happens all the time.

These teams met on Sept. 12, and let’s just say it went well for the Wildcats. But this time around? Having to chase Wolves quarterback Antraye Johnson for 48 minutes on a chilly November night in Henderson? Things that make you go, “Hmmm.” … Las Vegas by 7.

Coronado at Canyon Springs — Another rematch from September. In the first meeting, the Pioneers needed a 2-point conversion in overtime to win 16-15. I doubt we’ll get free football this time around.

There’s an old sports adage that it’s tough to beat a team twice in the same season. I don’t believe it. … Canyon Springs by 7.

Desert Pines at Faith Lutheran — If this Division I-A state quarterfinal was an Ultimate Fighting Championship bout, Mike Goldberg and Joe Rogan would say it has “ ‘Fight of the Night’ potential.” Now, let’s see if it lives up to the hype.

Only Moapa Valley has slowed the Jaguars’ offense this season, and this will be the Crusaders’ sternest test during their nine-game winning streak. These types of games tend to favor defense and special teams, which happen to be first-year Crusaders coach Vernon Fox’s specialties. … Faith Lutheran by 1.

Sierra Vista at Spring Valley — Let’s ignore the obvious downer here, which is that Bishop Gorman awaits the winner next week in the postseason. That’ll just ruin the mood. Let’s focus on the fact that a playoff berth is on the line, and the players will talk about this game like Al Bundy for the rest of their lives.

This is their Polk High, four-touchdown moment. Win and you can tell your children you were part of a playoff team. Lose and it will always eat at you. Like an order of animal-style fries from In-N-Out Burger. … Sierra Vista by 3.

Bonanza at Cimarron-Memorial — Everything I just wrote Sierra Vista and Spring Valley pretty much applies here as well. Glory. Honor. A date next week in the playoffs with the Northwest League champion. It’s all on the line.

Unless Bonanza somehow wins. Then, we would have three teams at 1-4 — I’m counting Desert Oasis’ game against Gorman as a loss for the Diamondbacks — and I’m not about to start sorting through that tiebreaker. … Cimarron by 10.

Virgin Valley at Moapa Valley — Nothing like a playoff game to stoke this bitter rivalry. I’m assuming the folks in Overton will be amped up for this one, and the Bulldogs likely will come out smoking.

Last time these teams met, the Pirates took advantage of a trick play right before halftime. Don’t be surprised if coach Brent Lewis pulls out the “annexation of Puerto Rico” this time. … Moapa Valley by 10.

Agassi Prep at The Meadows — The Stars won the tiebreaker over Laughlin and Needles for the Division III Southern League’s No. 3 seed. Their reward in the first round of the playoffs is a rematch with the Mustangs.

The Meadows won the first meeting 14-13 in overtime and is riding a four-game winning streak. Meanwhile, Agassi had that hiccup at Laughlin three weeks ago and hasn’t shown me it can win on the road. … The Meadows by 6.