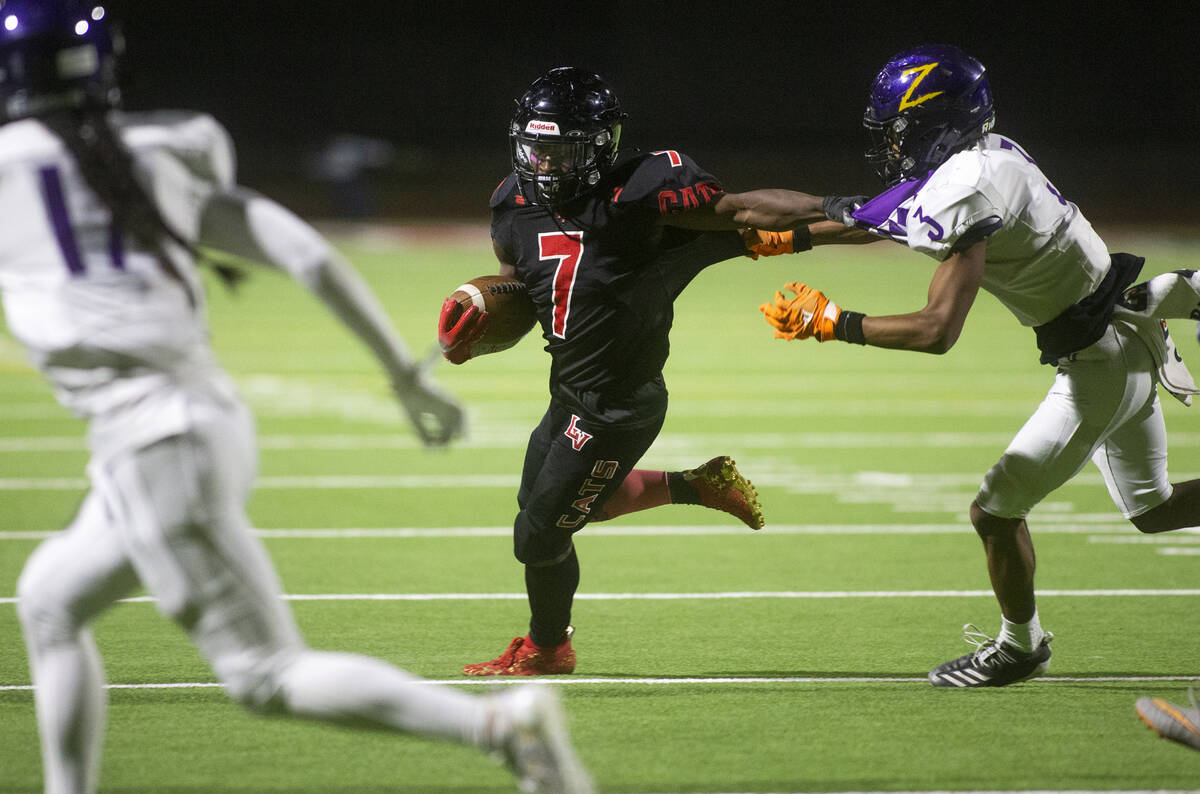 Las Vegas' running back Torrell Harley (7) heads for the end zone as Durango's defensive back Jaxon Young (3) attempts to bring him down during the first half of a high school football game at Las Vegas High School on Friday, Oct. 15, 2021, in Las Vegas. (Ellen Schmidt/Las Vegas Review-Journal) @ellenschmidttt 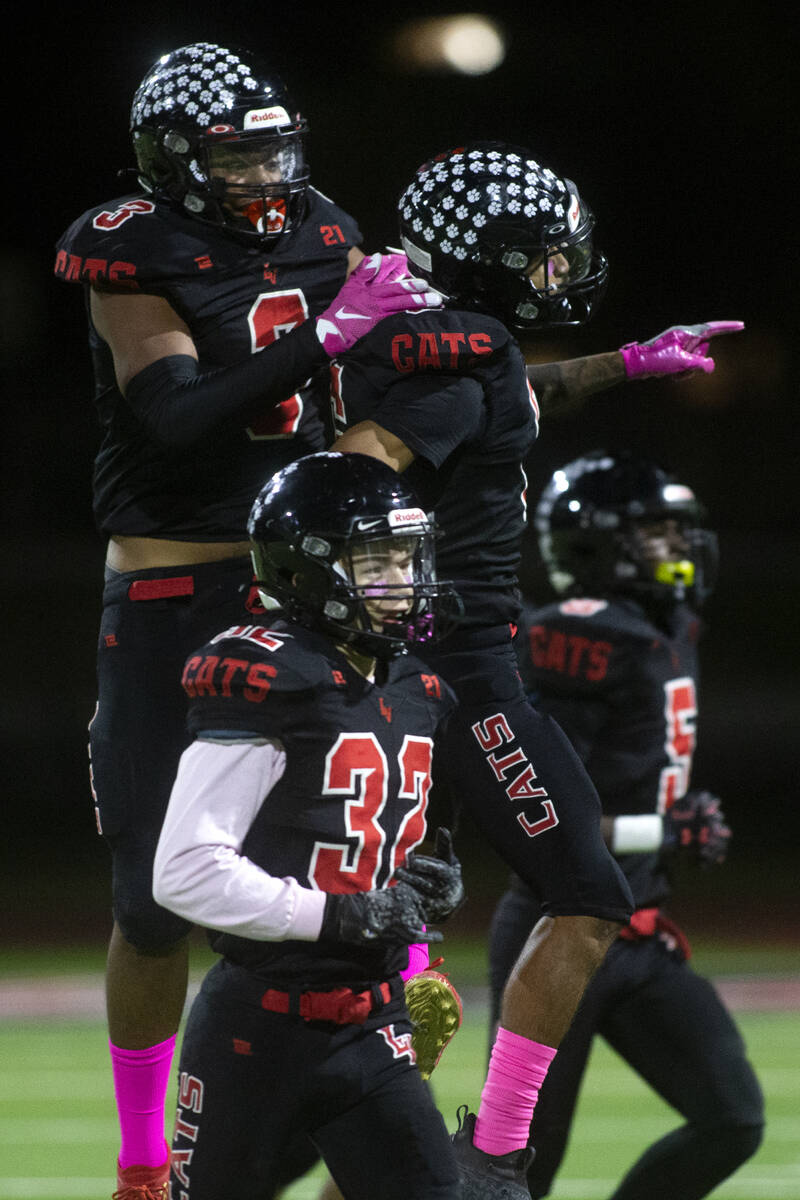 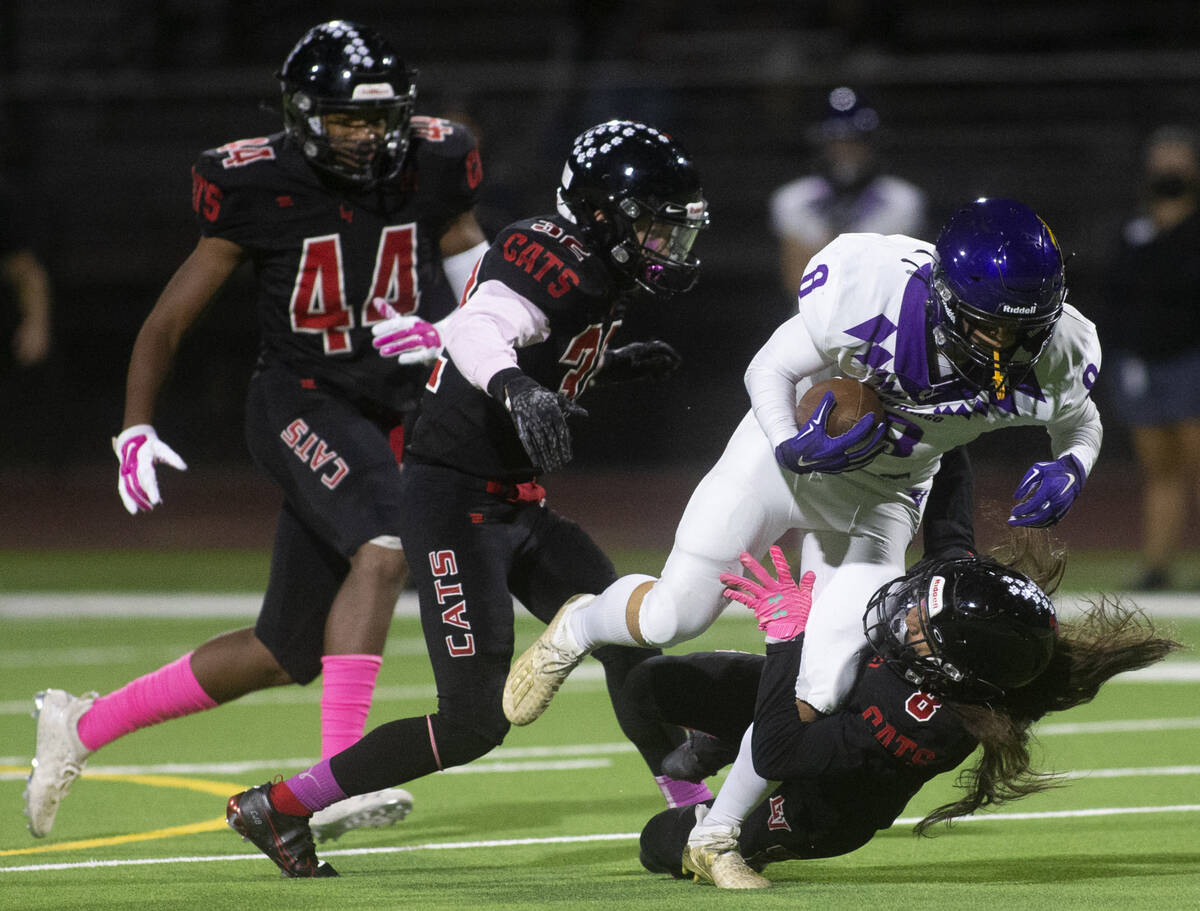 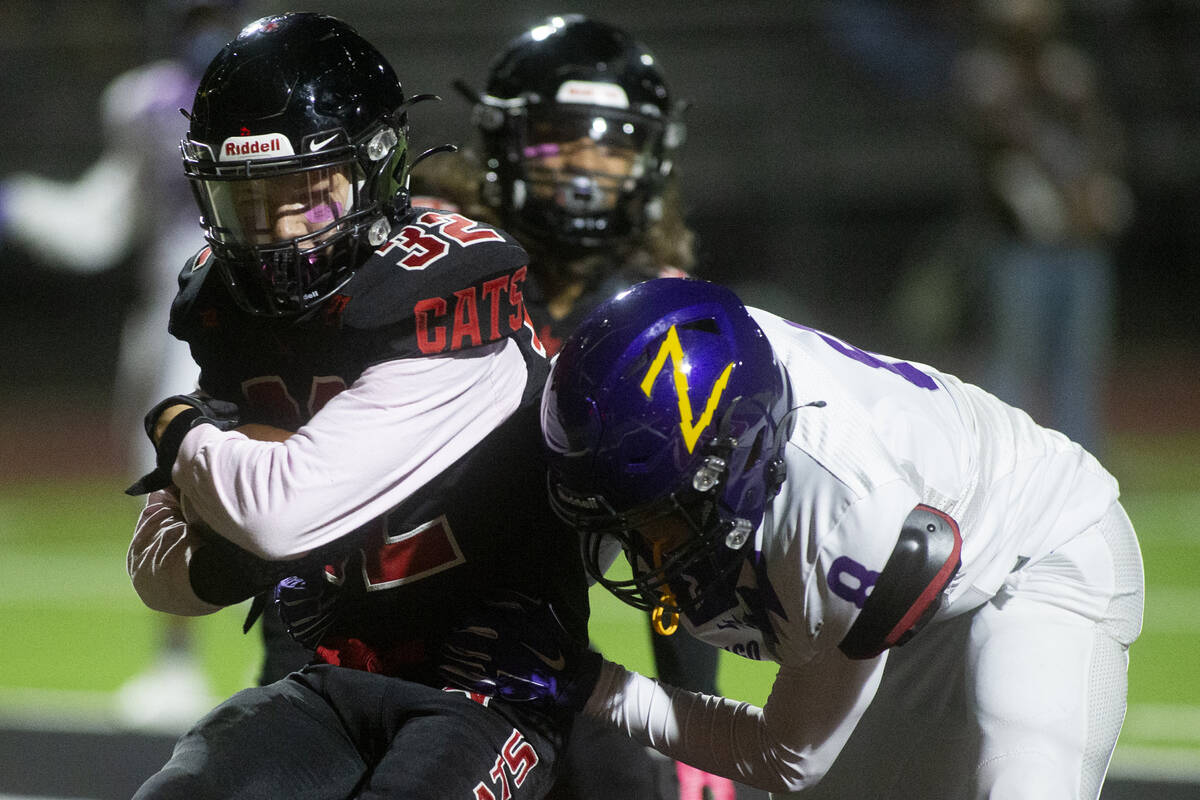 Las Vegas' defensive back Camden Bradshaw (32) catches an interception in the endzone while Durango's wide receiver Tanner Nitsche (8) attempts to tackle him during the second half of a high school football game at Las Vegas High School on Friday, Oct. 15, 2021, in Las Vegas. (Ellen Schmidt/Las Vegas Review-Journal) @ellenschmidttt 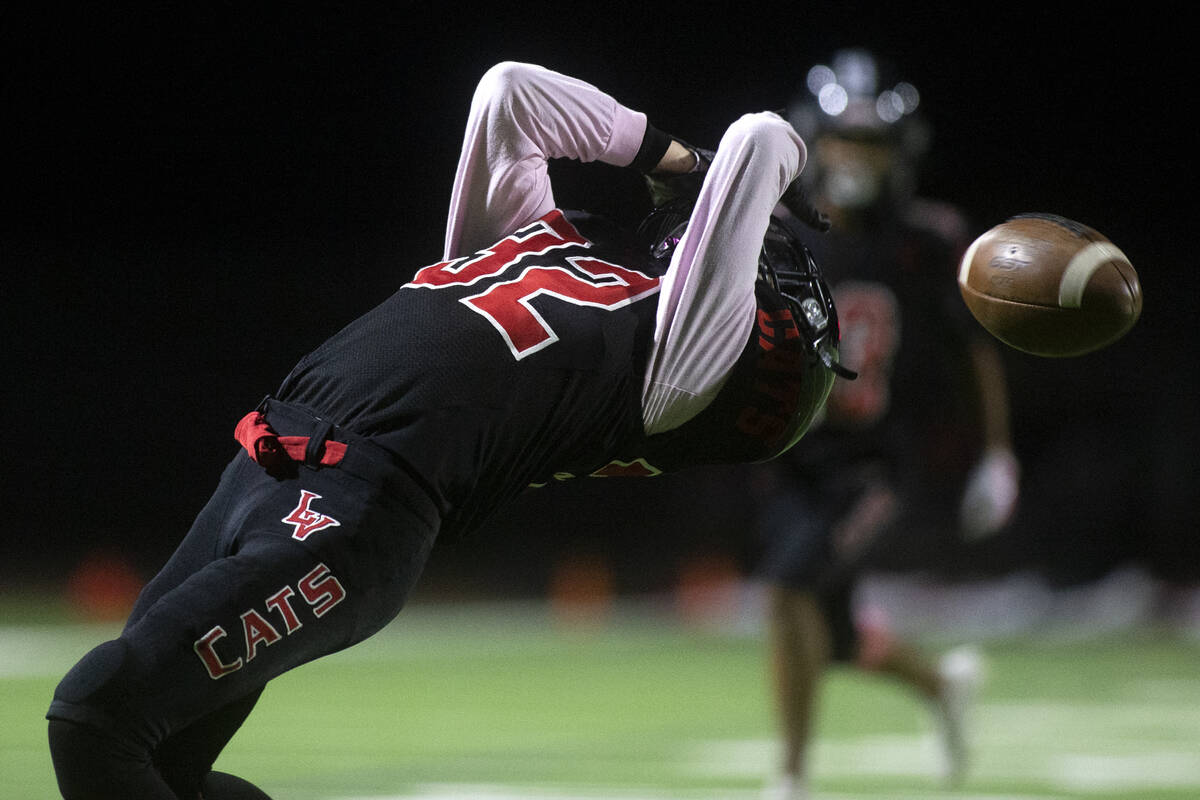 Las Vegas' running back Camden Bradshaw dives backwards but misses a catch during the second half of a high school football game against Durango at Las Vegas High School on Friday, Oct. 15, 2021, in Las Vegas. (Ellen Schmidt/Las Vegas Review-Journal) @ellenschmidttt 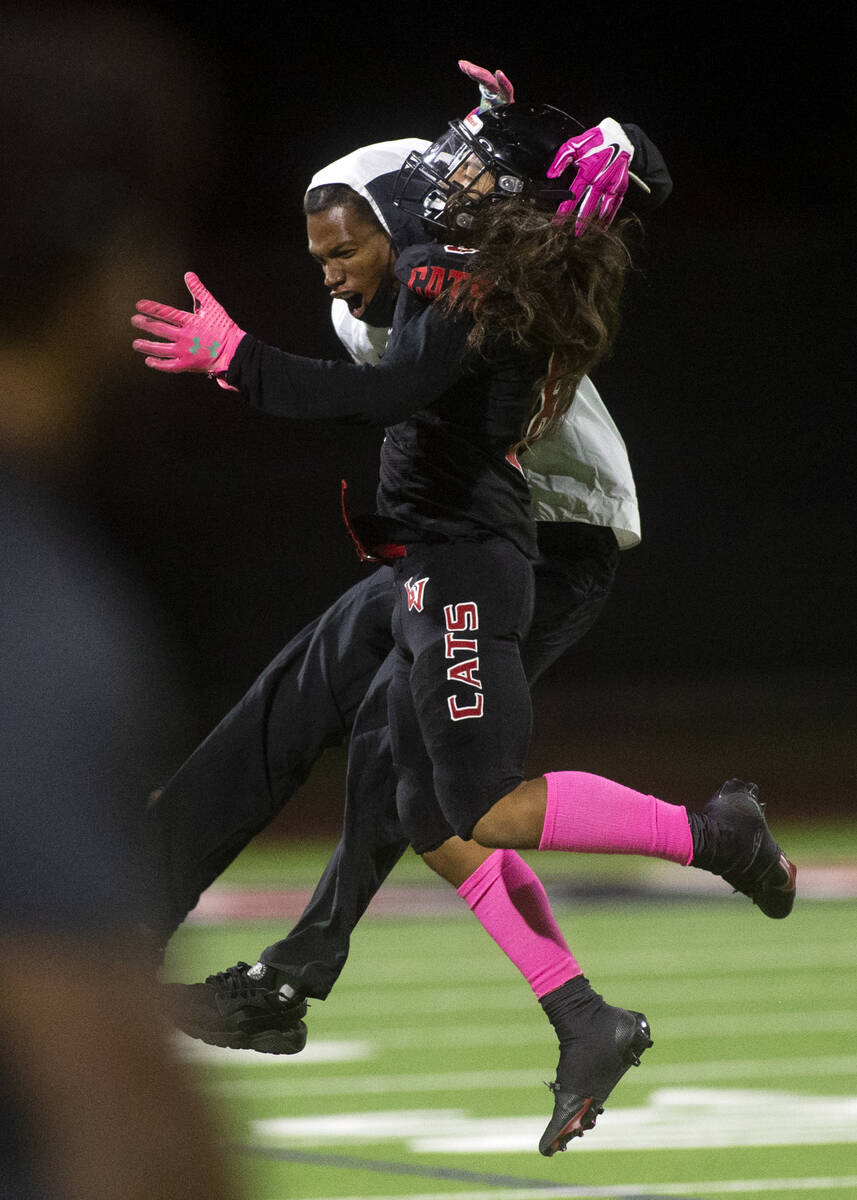 Las Vegas' Kawika Lopez (8) jumps with a teammate to celebrate the interception he caught during the second half of a high school football game against Durango at Las Vegas High School on Friday, Oct. 15, 2021, in Las Vegas. (Ellen Schmidt/Las Vegas Review-Journal) @ellenschmidttt

A previous edition of this story incorrectly stated Coronado had clinched a league championship.

One week is left in the football regular season, but some teams are ready to look ahead to the postseason.

One of those teams is in Class 4A, where Las Vegas clinched a league championship Friday night.

It wasn’t easy for Las Vegas, which needed a 76-yard fumble return from Kawika Lopez late in the third quarter for a 10-7 win over Durango and the Mountain League crown.

“It was huge. It’s our first division title in 11 years, and it was great for our kids,” Las Vegas coach Erick Capetillo said. “Our guys have worked extremely hard. It’s great to see the success, especially with how young our team is and to clinch it against a good Durango team.”

Las Vegas has earned a first-round bye in the playoffs and will host a state quarterfinal game Nov. 5. The other 4A leagues have not been decided. In the Desert League Silverado and Desert Oasis are unbeaten. They will meet Friday at Silverado to decide the champion.

Coronado has the inside track in the Sky League, needing only a win over Sierra Vista on Thursday to clinch the title. A Coronado loss and Shadow Ridge win over Spring Valley would make it a three-way tie for the title, and Shadow Ridge would be the No. 1 seed after a tiebreaker.

Because there are three leagues in 4A and four first-round byes, the second-place team in the Sky receives a free pass through the first round. If Coronado beats Sierra Vista, Shadow Ridge would receive the second bye.

While Capetillo wants to get his team some rest during the bye week, he’s more excited about the opportunity to keep improving.

“As a young team, we want to continue to get better. And a lot of the focus of getting better is doing so through practice,” Capetillo said. “So we think having that extra practice time will help us out more than anything.”

On a night in which only three games were decided by less than 18 points, there weren’t many strong candidates.

But a team scoring with about a minute left in the game to win and clinch a playoff berth is a solid choice on any night. That’s what Cimarron-Memorial did Friday at Chaparral.

Freshman E’juwan Carter popped a 10-yard touchdown run, and an Arnold Anderson interception followed to end the game. It’s been an inconsistent season for the Spartans, but they can finish with a winning 4A Desert League record with a victory over winless Sunrise Mountain on Friday.

After missing last week’s game because of COVID-19, Arbor View was back in action with a 9 a.m. Saturday kickoff at Legacy.

Arbor View coach Matt Gerber said before his players arrived at 5:30 a.m., he hadn’t seen about three-quarters of them since last week because of COVID-19 protocols. That, and the early kickoff, made for a ragged start. But they recovered for a 31-8 win.

The Aggies (6-2, 2-1 5A Desert League) trailed 8-7 early in the second quarter before a 27-yard field goal from Joe Vinatieri gave them the lead. They added two defensive touchdowns, a Jaden Jackson fumble recovery and Zurich Ashford interception in the second quarter to take a 24-8 halftime lead. Makhai Donaldson rushed for two scores.

Should Arbor View defeat Canyon Springs and Foothill lose to Bishop Gorman on Friday, the Aggies would be the No. 2 seed out of the 5A Desert League and get a home playoff game. Legacy (2-5, 1-3) is still alive for a playoff berth and meets Palo Verde on Friday.

The game of the week could be in 3A, where Moapa Valley will host Virgin Valley in the annual Hammer Game. The teams have a combined 15-1 record and met six months ago, with Moapa Valley winning an 18-14 slugfest during the shortened spring season.