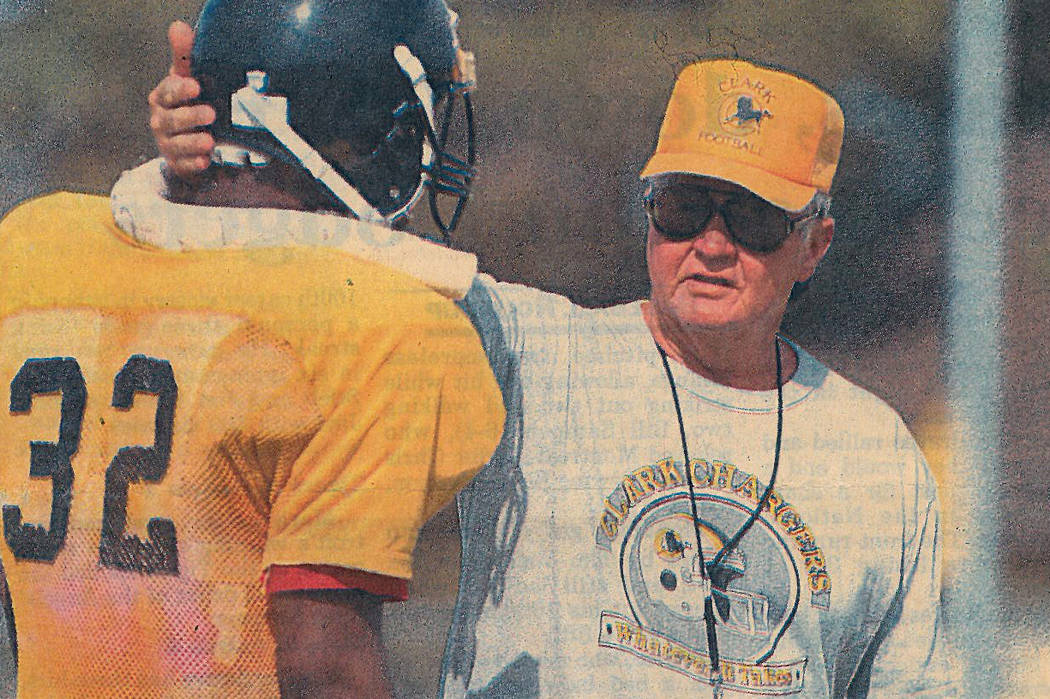 One of the highest compliments a coach can receive is to be loved and respected by opponents. Hall of Fame coach Larry Barnson fit that bill.

“He was the type of coach who could motivate a kid to do anything,” said Larry Barnson’s nephew and namesake, Larry Barnson. “If you were 105 pounds, he could make you a lineman. If you did something wrong, he would put his arm around you. He wasn’t the type to yell and scream at you.”

Funeral services will be held Saturday at Trinity United Methodist Church, 6151 W. Charleston Blvd. in Las Vegas. Viewing will be held from 11:30 a.m. to 1 p.m., with a service to begin at 1 p.m.

After graduating, he turned down football scholarship offers and served in the United States Air Force from 1952-56 before returning home and becoming a member of UNLV’s first graduating class in 1964.

While in college, Barnson led the Donna Kutzen Youth Foundation Boys Football League team to the Bantam championship of Clark County in 1960 and ’61. After graduating from college, he turned that love of sports and being around young people into a full-time career.

He coached for a year at Western before moving to Clark, where he stayed for 29 years and taught driver’s ed and health in addition to his coaching duties. In his first year there, he met his wife, Kathy, and they married in 1967. They have two daughters, Lezlie Barnson-DeNardin and Ginnie Barnson.

“I can’t count the number of people that I’ve met who said, ‘You taught my son or daughter how to drive a car,’” Barnson’s nephew Larry said. “I said, ‘That wasn’t me. That was my uncle.’ He was very good at it.”

He was also good at coaching and being adaptable to the personnel he had.

When Clark won the state championship in 1968, Barnson’s nephew said his uncle used a spread offense and threw the all “not a lot, but some.” The 1993 squad ran the double wing, a “grind-them-out, cloud-of-dust-type offense that never threw the ball.”

Dan Barnson, Larry’s great-nephew, picked up the double wing and ran it at Arbor View until his retirement after last season. “If I could go back and change one thing, it would be that I didn’t get to coach with him,” Dan said.

Barnson’s final coaching job was for one year at Silverado, where his nephew Larry was the athletic director when the school opened in 1995.

He was inducted into the Southern Nevada Football Coaches and Southern Nevada Track and Cross Country halls of fame in 1996, and the NIAA Hall of Fame in 2011. In 2014, Clark debuted a new scoreboard that bears his name and named the field after him.