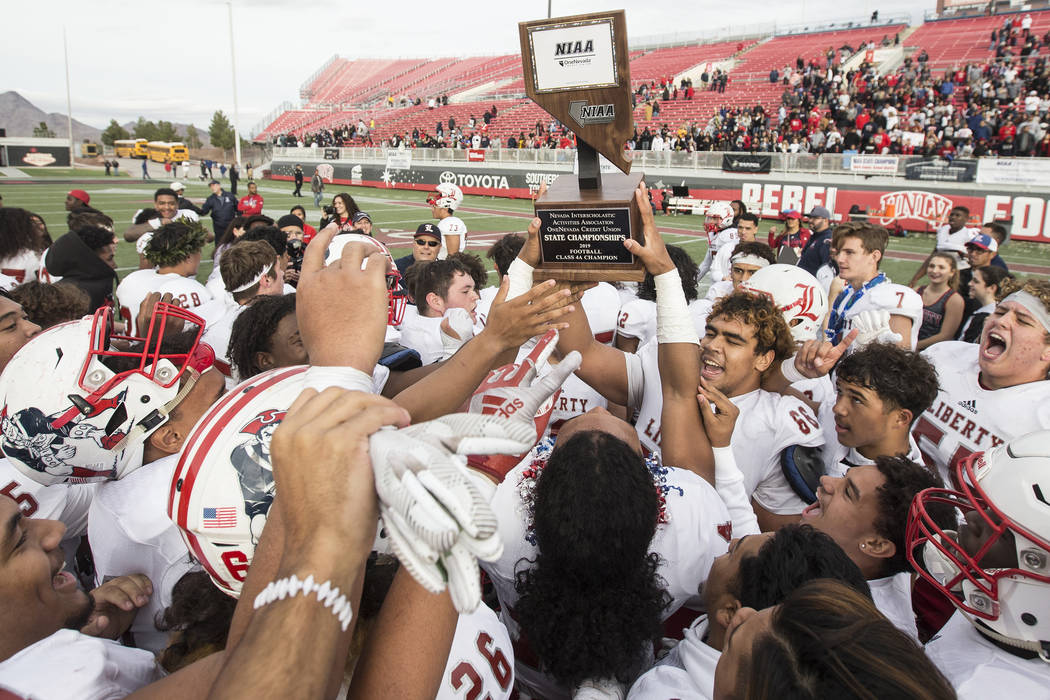 There was no time to mess around when I arrived in the Las Vegas Valley in August.

As the Review-Journal’s new Nevada preps coordinator, I had eight days to learn the fall sports landscape before a new season began.

New teams, new coaches and a whole different ballgame than I’m used to — especially when it comes to high school football.

ESPN SportsCenter anchor Scott Van Pelt often says that everyone is from somewhere, and that usually shapes how you view things.

For me, that place is Texas, so let’s get this out of the way. Everything is bigger in Texas, including high school football.

The team rosters, the bands, the crowds, the stadiums, the homecoming bouquets — which isn’t a thing at all in Nevada — are all bigger in Texas. In small-town Texas, there’s a joke that if the team is playing on the road that Friday, the last person out of town needs to turn off the lights.

That crowd wouldn’t fit inside UNLV’s Sam Boyd Stadium, which was less than half full for last week’s Class 4A state title game between Liberty and Centennial.

I got a sense that things were different before the season even started, by reading a game story from last year.

My colleague Ben Gotz described how Bishop Gorman coach Kenny Sanchez held up one hand while he checked his watch on his other hand before gesturing for the Gaels’ offense to run the next play against Orem (Utah). They were trying to run out the clock, but I couldn’t figure out why Sanchez needed to look at his watch.

Why doesn’t he just look at the play clock?

A couple weeks later, I went out and covered my first game and started looking for the play clocks. I couldn’t find one, and that story suddenly made sense.

Add in that most of the fields are natural grass in stadiums with open-air press boxes, compared to artificial turf and enclosed press boxes in Texas, and that usually only the home team’s band is at the game — something completely unfathomable to me before I arrived in Nevada — and it’s different in plenty of ways.

But it’s still the same game.

Every player I spoke to was dedicated to helping his team win. The coaches all spoke of culture, creating a family atmosphere and trying to help their players become not just better football players but better men — exactly the same things coaches in Texas told me for 15 years.

And I learned there’s some top-flight talent in the valley. Desert Pines tight end Darnell Washington is a top-10 recruit nationally, and there are several others throughout the valley that are headed to Division I schools, too.

Also, no matter how long I’m in the Las Vegas Valley, I might never come across a more memorable season than my first. Consider these stories, which offer a small taste of what happened this year:

Clark, Rancho and Valley playing on the road all season after their turf fields were deemed unplayable.

Canyon Springs being eliminated from the playoffs because a player was determined to be ineligible after a first-round postseason win.

Centennial reaching the state championship game two seasons after winning only one game.

And, of course, Liberty ending Gorman’s streak of state championships at 10 and wins against in-state opponents at 115 and going on to win its first state title.

The crowd was smaller at that championship game than I’m used to. But the smiles and sense of accomplishment for the Patriots were the exact same as they were in Texas.

So, yeah, in many ways, high school football is a completely different ballgame in the two places. But it’s still the same game.