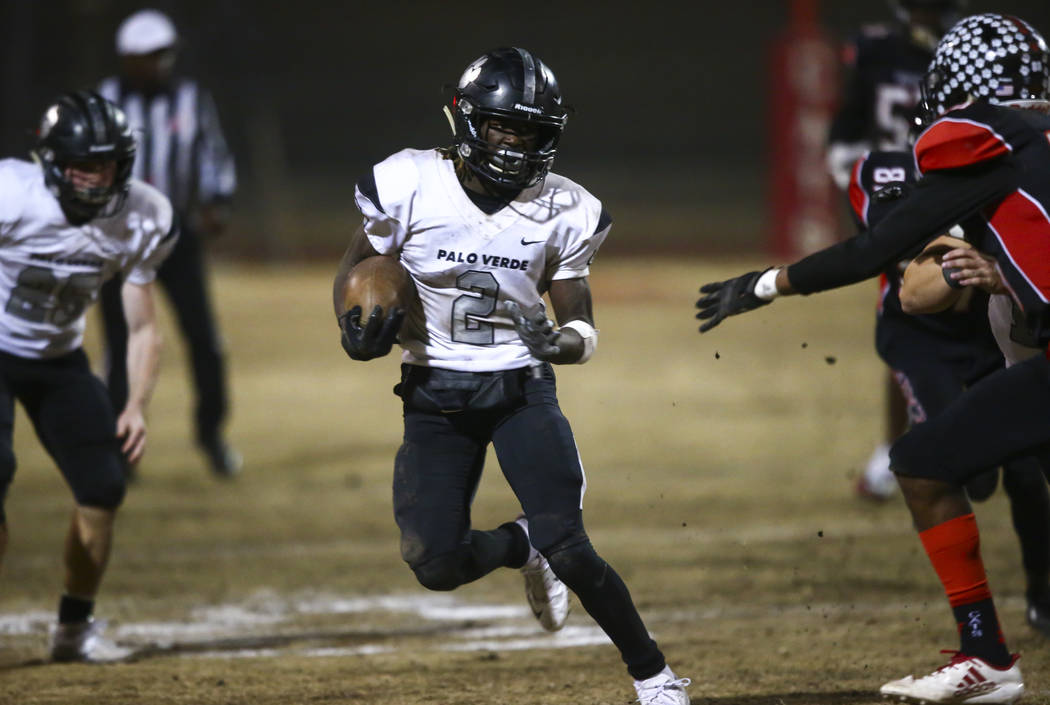 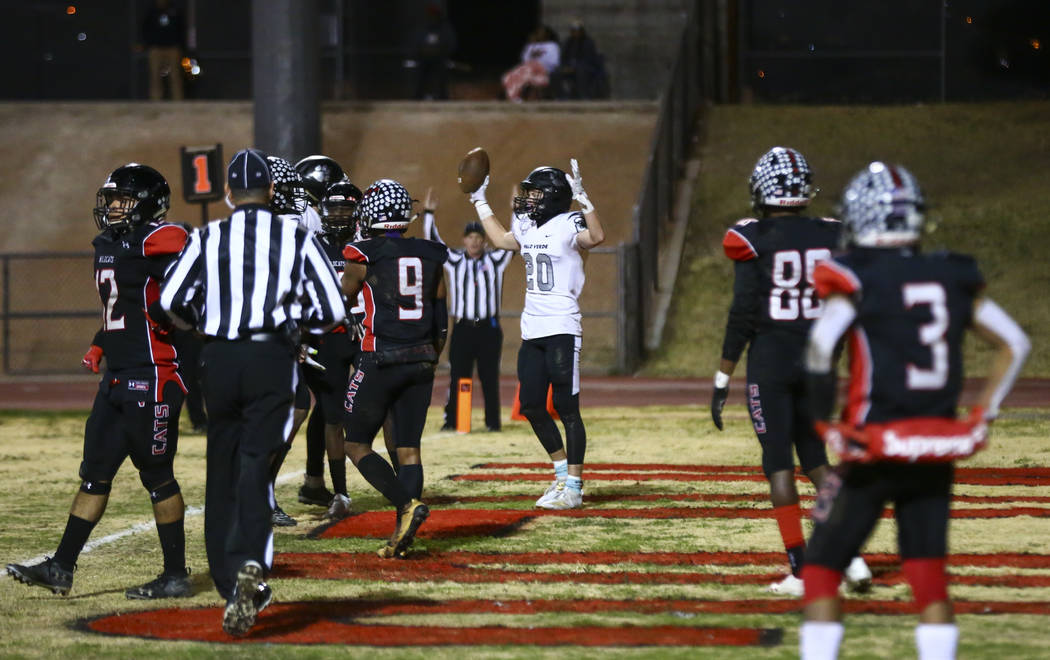 Palo Verde's Luca Mauriello (20) celebrates after scoring a touchdown against Las Vegas during the first half of a football game at Las Vegas High School on Friday, Nov. 15, 2019. (Chase Stevens/Las Vegas Review-Journal) @csstevensphoto 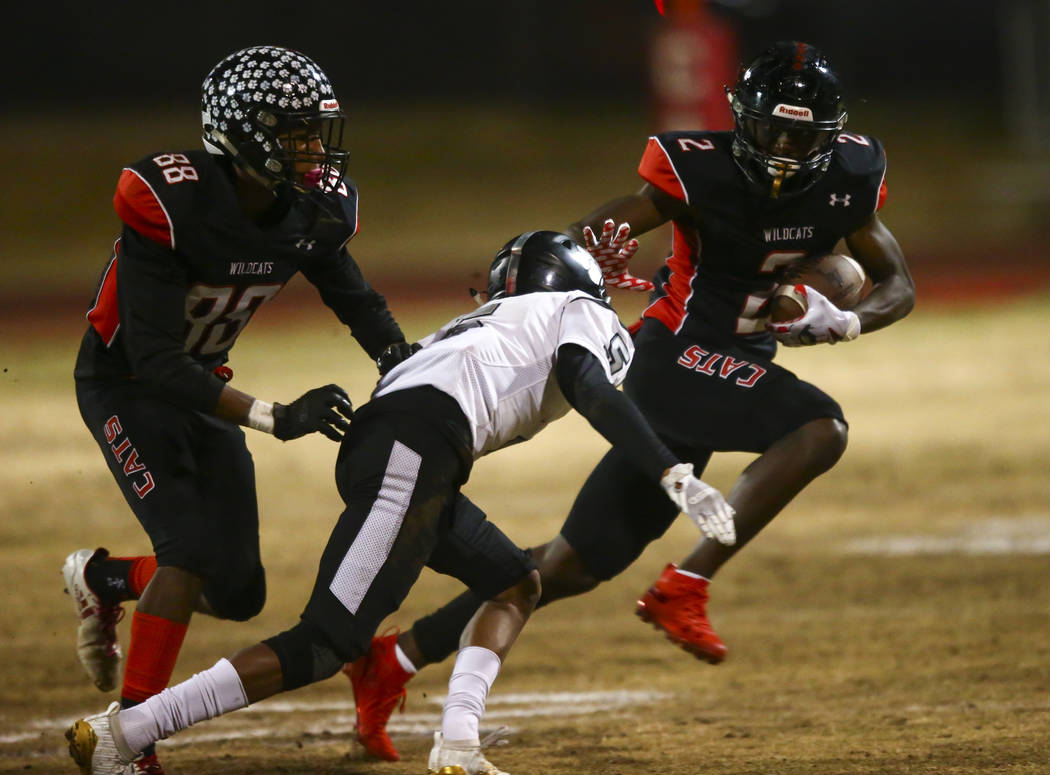 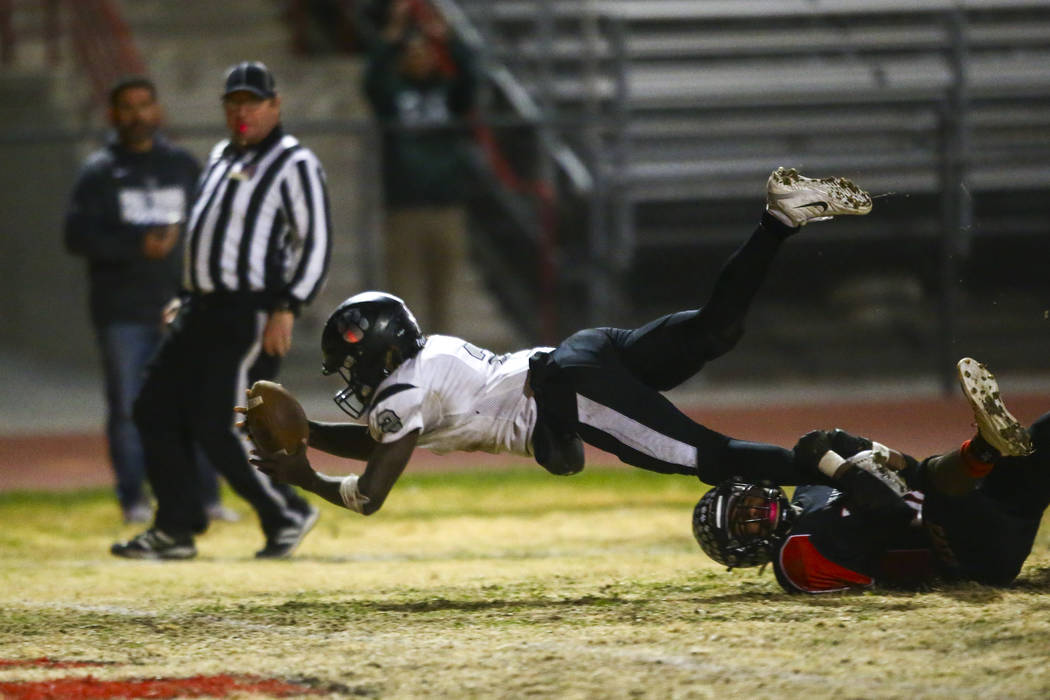 This season marked a huge turnaround for Las Vegas High, a six-win improvement from last year that landed the Wildcats in the No. 2 spot in the Northeast League.

For Arbor View, being the No. 2 seed from the Northwest League was a bit of a disappointment because the Aggies had been the No. 1 seed each of the past five seasons.

No matter how they got there, Las Vegas and Arbor View were in the enviable position of having a Mountain Region quarterfinal game on their home field. But because of some unruly guests that were No. 3 seeds, both of them are finished for the season.

Palo Verde never trailed in a 41-23 victory at Las Vegas. Canyon Springs turned the disaster of a botched field-goal attempt into a game-winning touchdown to eliminate Arbor View 24-20.

Add in Foothill’s 20-7 win over Silverado in last week’s Desert Region quarterfinals, and three of the four No. 2 seeds lost at home to open the Class 4A playoffs. Only Green Valley came away victorious as a No. 2 seed with a 34-6 win over Durango.

“We looked at it like our league had prepared us for pretty much any kind of scenario,” Palo Verde coach Joe Aznarez said. “We just told our kids they were a very good opponent, and we respected the heck out of Las Vegas.”

Now comes the hard part — beating a No. 1 seed on its home field. For Palo Verde and Canyon Springs, Friday’s win means a rematch against the top team in its own league in the Mountain Region semifinals.

Northwest League champion Desert Pines jumped on Canyon Springs early in the regular season and claimed a 49-14 win that was part of the Pioneers’ 0-6 start. They’re a different team now, having won four straight, and Canyon Springs coach Gus McNair pointed out that his team had the ball inside the Jaguars’ 20-yard line four times and didn’t score.

Palo Verde got into a shootout with Centennial in the regular season and tied the score with 7:37 left, only to watch the Bulldogs score two late touchdowns for a 50-36 victory. Centennial won the Northeast League title.

“We’ve been saying it since we lost over there that we want another shot at those guys,” Aznarez said. “We lost by 14, but it was a one-possession game for most of it. Our kids just want another shot. They’re happy to still be playing and motivated. They’re unsatisfied with what they’ve done so far.”

In the Desert Region, Foothill put together a stronger showing than it did in its regular-season meeting against Liberty but lost again. The Falcons dropped a 38-0 decision Oct. 18, but were within 31-21 in the third quarter before the Patriots pulled away for a 52-21 win.

As usual, Bishop Gorman wasted no time jumping on its opponent, in this case Green Valley, with 21 points in both the first and second quarters. The Gaels pulled off the throttle in the second half for a 42-7 win.

Palo Verde can strike through the air.

The thing about teams that run offenses like the double wing is they don’t have to hit a lot of passes to be successful. Opponents are so worried about their physicality and running game that it usually takes one or two connections that can end up being the difference.

Palo Verde’s Paul Myro was 3-for-5 for 89 yards passing. Those aren’t gaudy numbers, but two of the three completions went for touchdowns to Kade Madsen. The first was a 3-yarder with 13 seconds left in the first half that made it a 14-3 Panthers lead, and the second was a 67-yard TD that made it 28-9 after Las Vegas turned the ball over deep in Palo Verde territory.

“I think it’s put teams on notice. We’re not quite as one dimensional as we’ve been in the past,” Aznarez said. Opponents have to game plan against more than one style now.”

Myro is hitting about half his passes and eclipsed the 1,000-yard mark for the season Friday. He has 10 TDs and five interceptions, and Aznarez said Myro has been the team’s MVP, along with running back Charron Thomas, who has 1,363 yards and 14 TDs rushing.

Bishop Gorman, the 10-time defending state champion, and Liberty have been on a collision course since they were put in the Desert Region, and they’ll meet Friday at Liberty in the region final.

The Patriots were the closest to Gorman of anybody in the state last season, though the 42-28 loss in the state semifinals was deceiving because the Gaels scored the first 28 points.