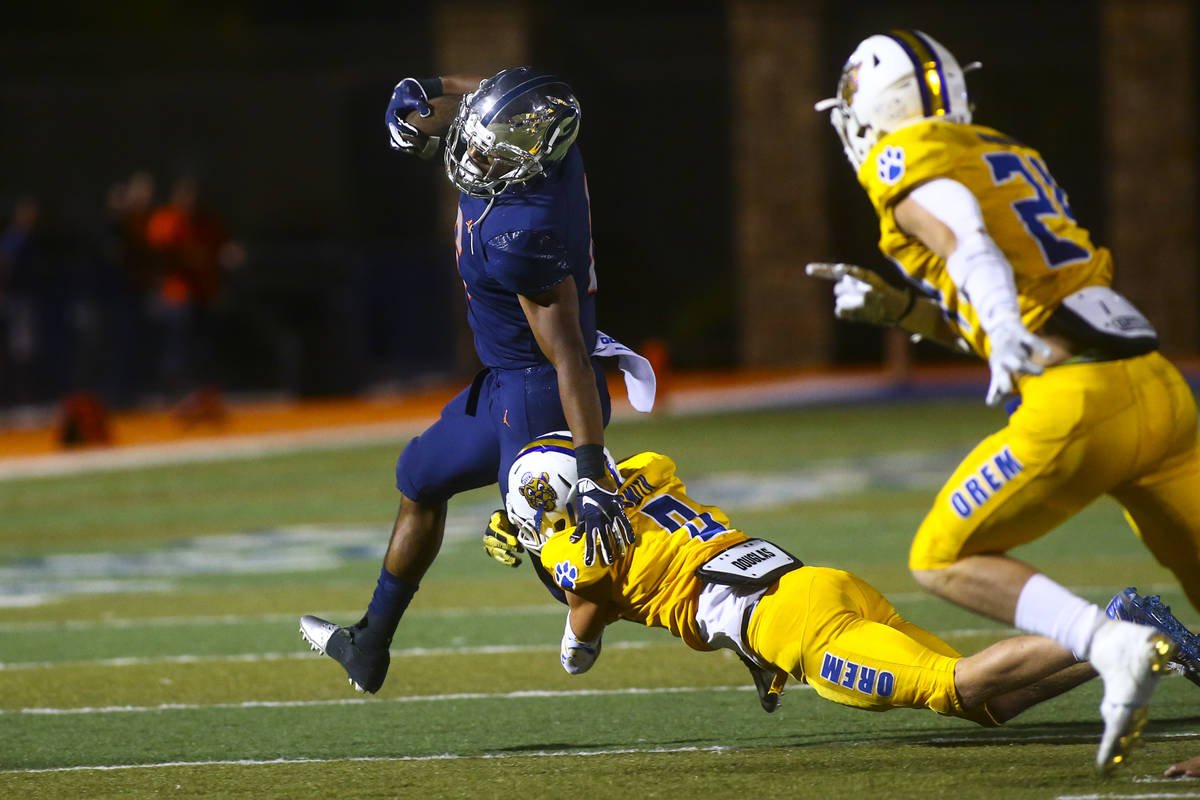 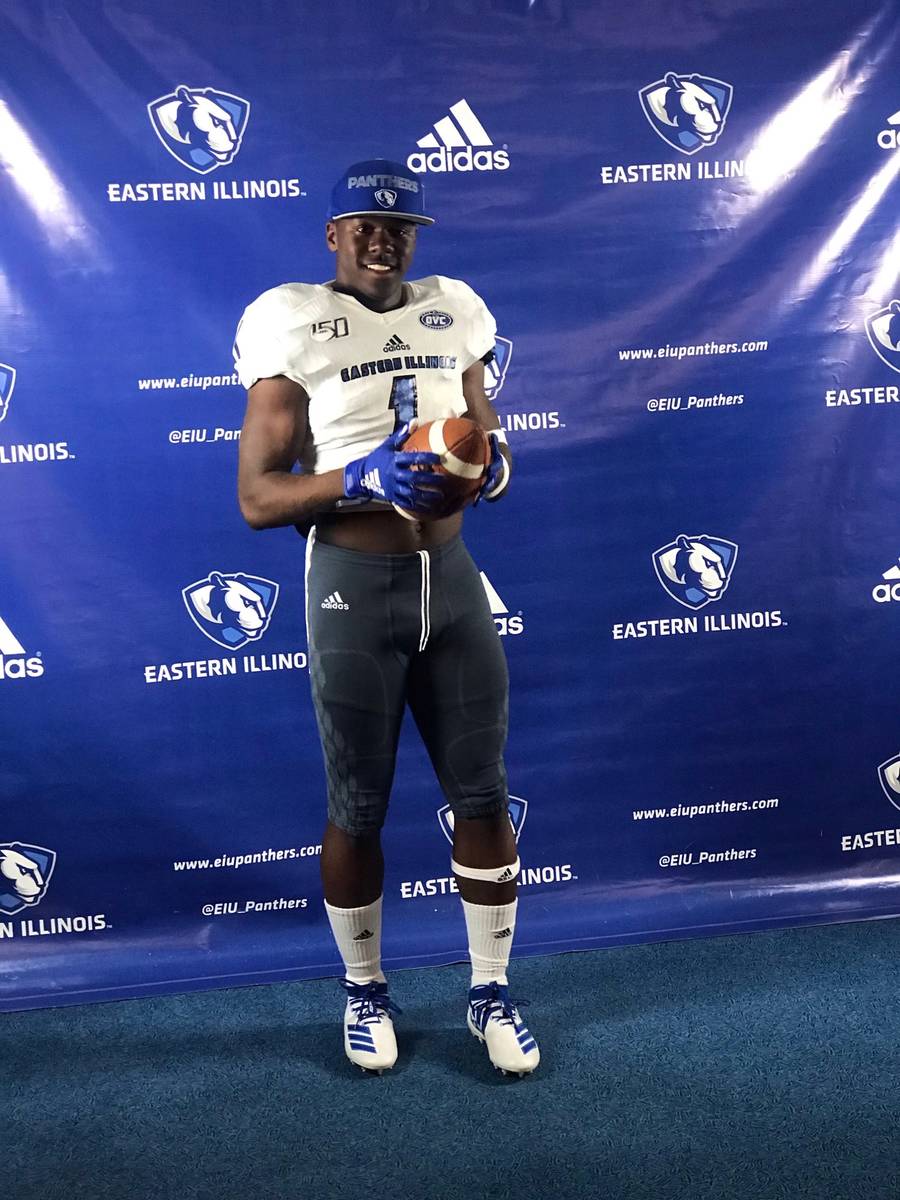 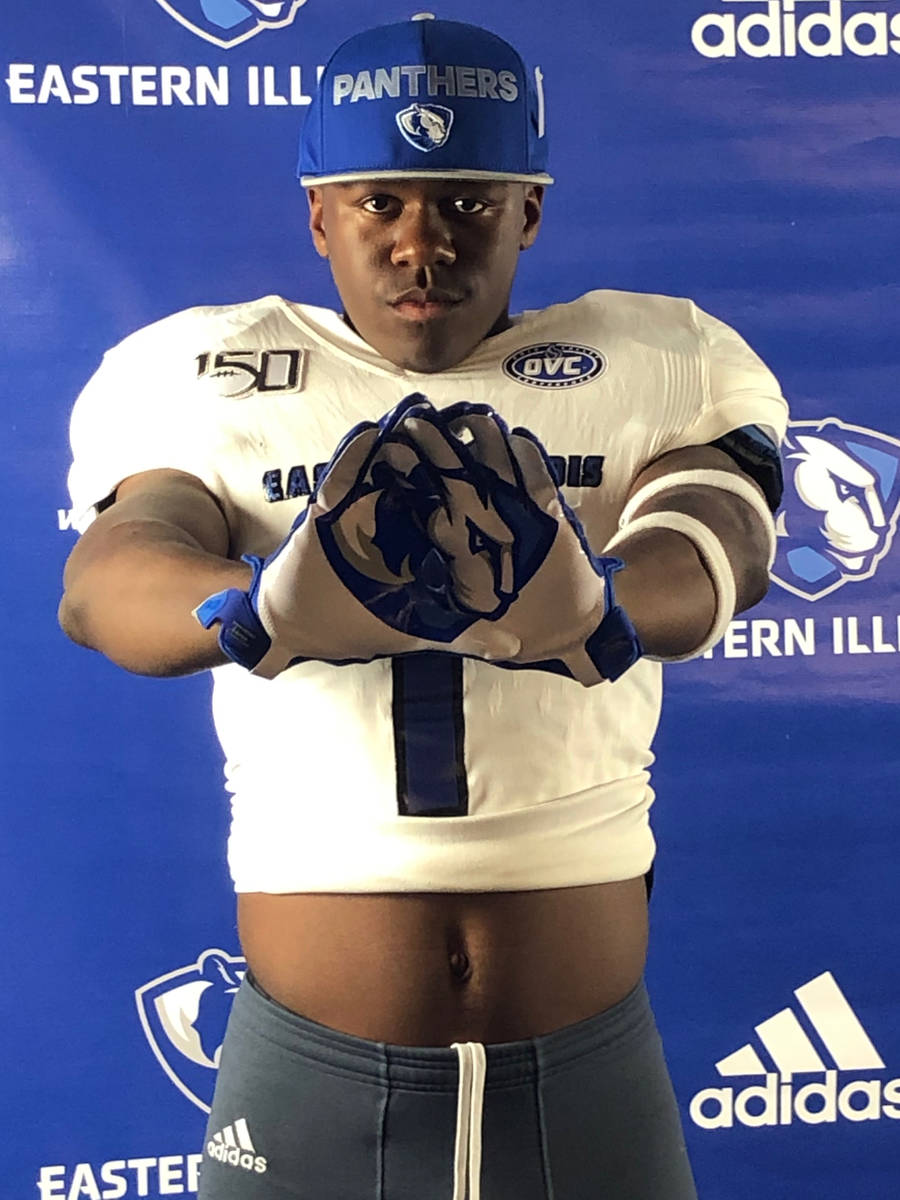 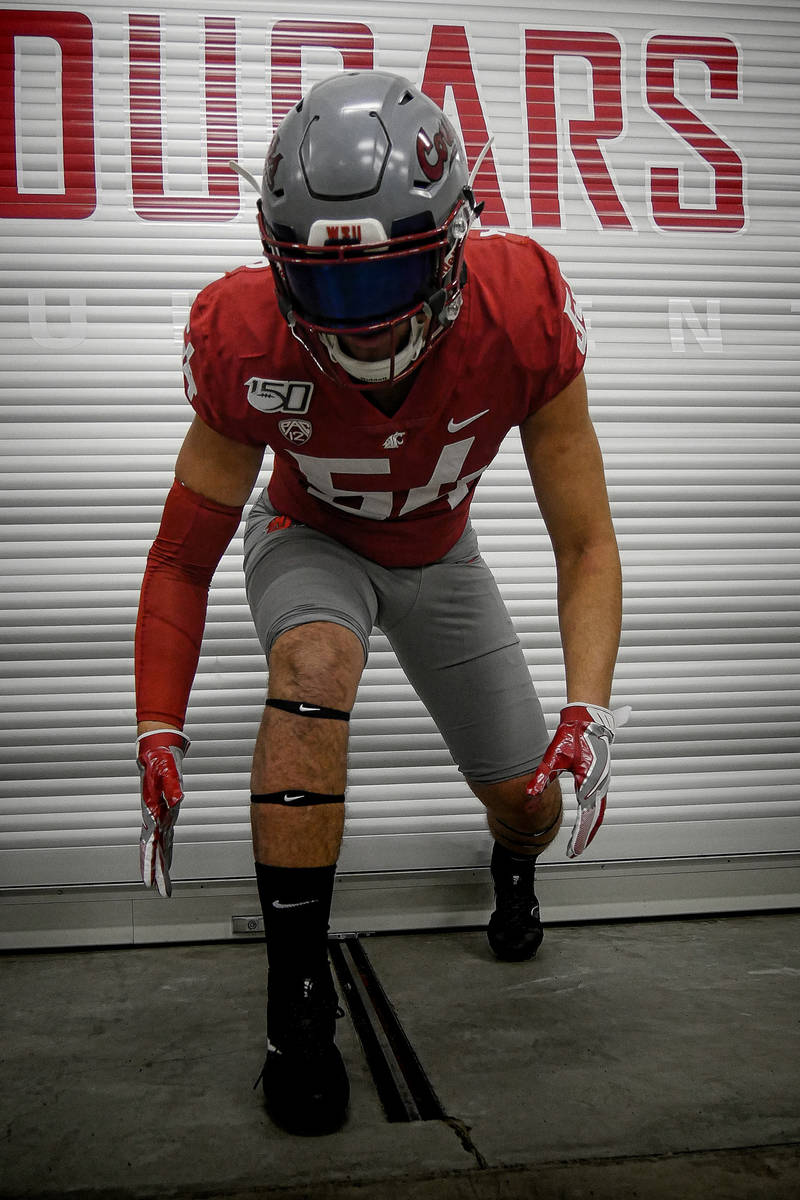 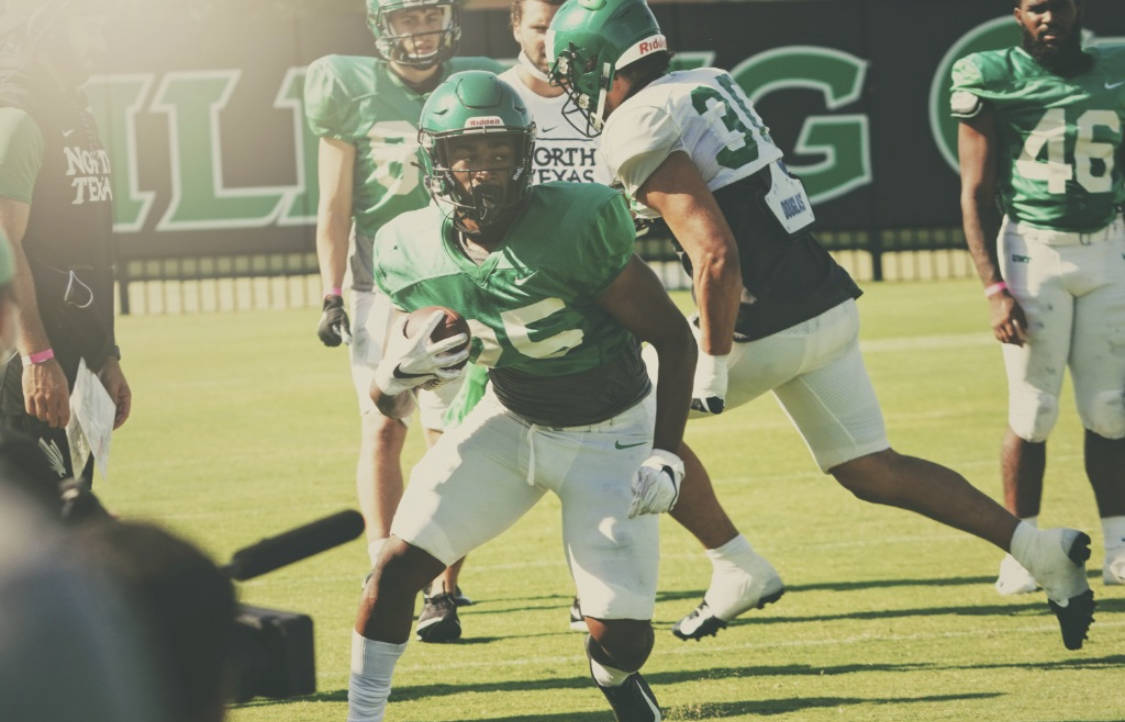 Ikaika Ragsdale, a running back from Bishop Gorman, and his North Texas team have played two games so far this season. (North Texas athletics)

Running out on the field for the first time and hearing the roar from a stadium full of adoring fans is the fulfillment of a lifetime dream for most college football players.

The reality didn’t quite match the dream for North Texas freshmen Ikaika Ragsdale and Jonathan Pickett.

Only 7,611 people attended the Mean Green’s opener Sept. 5 at Apogee Stadium in Denton, Texas, a 57-31 win over Houston Baptist, as stadium capacity is limited because of the coronavirus pandemic.

“It’s very different than what I’m used to without the fans,” said Ragsdale, a running back from Bishop Gorman.

At least Ragsdale and Pickett, a defensive end from Desert Pines who made one tackle in his collegiate debut against Houston Baptist and got into the game against Southern Methodist on Sept. 19, a 65-35 loss, have been able to get a couple of games under their belt.

Most of the freshman football players from the Las Vegas Valley have yet to do so, as most Division I conferences postponed their seasons. Several have done an about-face in recent days and decided to play this fall but haven’t taken the field yet.

Pickett and his high school teammate Darnell Washington, a freshman tight end at Georgia who was a top-10 national recruit, could not be reached for comment.

Former Bishop Gorman quarterback Micah Bowens, now at Penn State, and wide receiver Rome Odunze, now at Washington, were not made available, as it is school policy to not allow true freshmen to speak to the media.

No matter when they get their opportunity to play, every freshman handles the adjustment to college differently. Here’s a look at how a few of them from the valley are doing.

The former Desert Pines standout, who has been on campus in Pullman, Washington, since June 30, said the college game has been about what he expected.

“It’s just football at a faster pace,” Lopez said. “The one thing that’s surprised me was how much field awareness you need and understanding what I have to do, what the tackle does, what formation and back set it is and even what down it is.”

Lopez, Nevada’s all-time sacks leader with 41, is expecting to play “edge rusher” and said he went from having about 10 plays in high school to 60-plus in college.

The Pac-12 will play a seven-game conference season beginning Nov. 6. The team has been lifting, having in-person meetings and practicing on the field with helmets.

Lopez said he has kept in contact with his high school teammates, such as Pickett and Washington, and that they’re adjusting well to college life.

As for Lopez, he said he misses home but “I feel like it was time for me to get away and do my own thing.”

While most of the college freshmen from the valley are on campus, that’s not the case for the former Green Valley defensive end.

After signing withPortland State of the Football Championship Subdivision, Maningo watched as his friends left town and went off to college, leaving him with little to do but work out every day.

“It’s been tough. I was supposed to be up there July 1,” Maningo said. “But then all the riots and coronavirus messed with it, and now I don’t even know anymore when I’ll be allowed to get on campus.”

Finally, Maningo decided to get out of town. He moved to Seattle to be with his brother Drake, a baseball player at Seattle University. Drake’s coach said Zane could use the school’s facilities and train with the team.

Zane, a first-team All-Southern Nevada pick at defensive end with 70 tackles and 16.5 sacks, said he’s been on daily Zoom meetings with Portland State teammates and that they have an active group chat that has helped him get to know them.

He’s looking forward to getting on campus and developing those relationships and to get into an actual classroom, as he feels more focused than sitting behind a laptop. Despite the delayed start to his college career, he’s still excited about his future.

“Right when they tell me I’m allowed to come, I’m going to be there,” Zane said.

The former Bishop Gorman standout moved to Logan, Utah, to begin his college career in June, and he’s taken to a different environment.

“They take it seriously here, but at the same time it’s fun,” Mesake said.

The Mountain West season will start Oct. 24. Mesake said the hardest part of college football has been learning the playbook. He said he’s used to a complex defense, because that’s what he played at Gorman, but he’s changing positions.

He was a down lineman in high school who weighed “about 250 or 260” pounds as a senior, but he’s dropped to 219 and is moving to outside linebacker.

While Mesake said he likes it in Logan, he does miss one thing.

If there’s one player from the 2020 class in Las Vegas who can claim to have been overlooked, it’s the former Centennial running back.

Smith was the Review-Journal All-Southern Nevada Team Offensive Player of the Year after rushing for 1,832 yards and 24 touchdowns and catching 17 passes for 283 yards and two scores.

His production led the Bulldogs to their first state championship game, but the big boys of college football didn’t come calling. He finally ended up at FCS Eastern Illinois, which is most notable for producing NFL quarterbacks Tony Romo and Jimmy Garoppolo.

“They decided to take another speed, dual-threat back. They saw me, and they liked the film,” Smith said.

Because of COVID-19 restrictions, Smith said the Panthers haven’t been able to practice offense vs. defense, and their practices have been in shorts, a T-shirt and helmet, “kind of like summer,” Smith said.

Smith wouldn’t say he’s going to receive playing time at running back as a freshman, but he thinks it looks good for him to be on special teams. But he said it’s been weird not playing in the fall.

“Being in football since elementary school, it was like football was going to happen whether you like it or not,” Smith said. “Now, it’s supposed to be game day, and we’re out there not even in shells and helmets and going through the motion. It’s lit a huge fire under me to get back out there.”