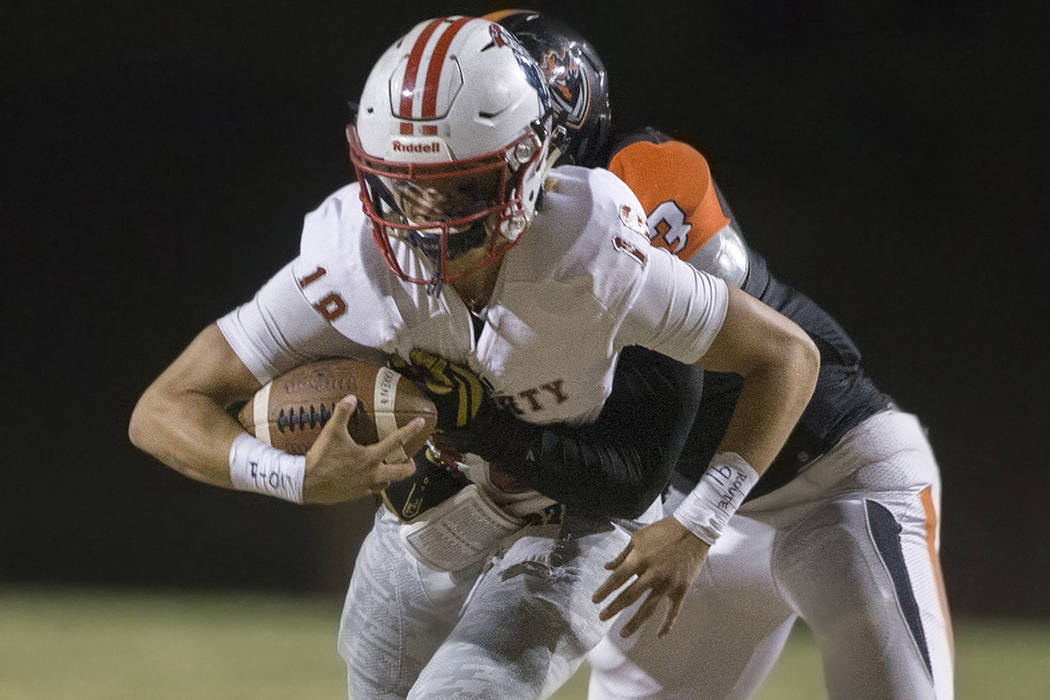 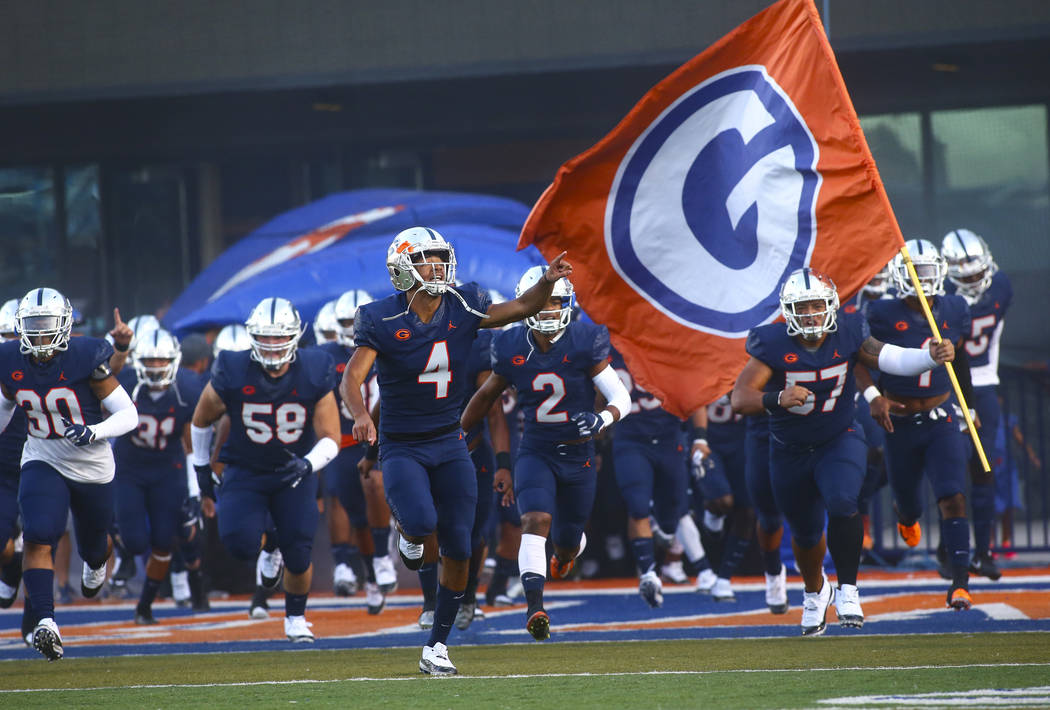 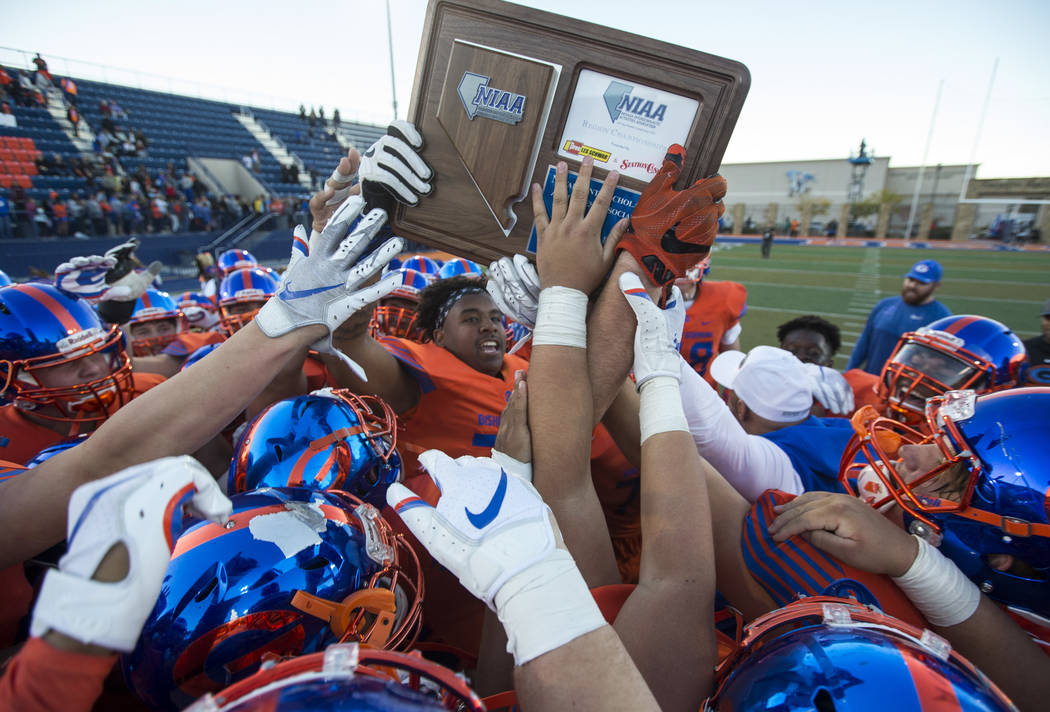 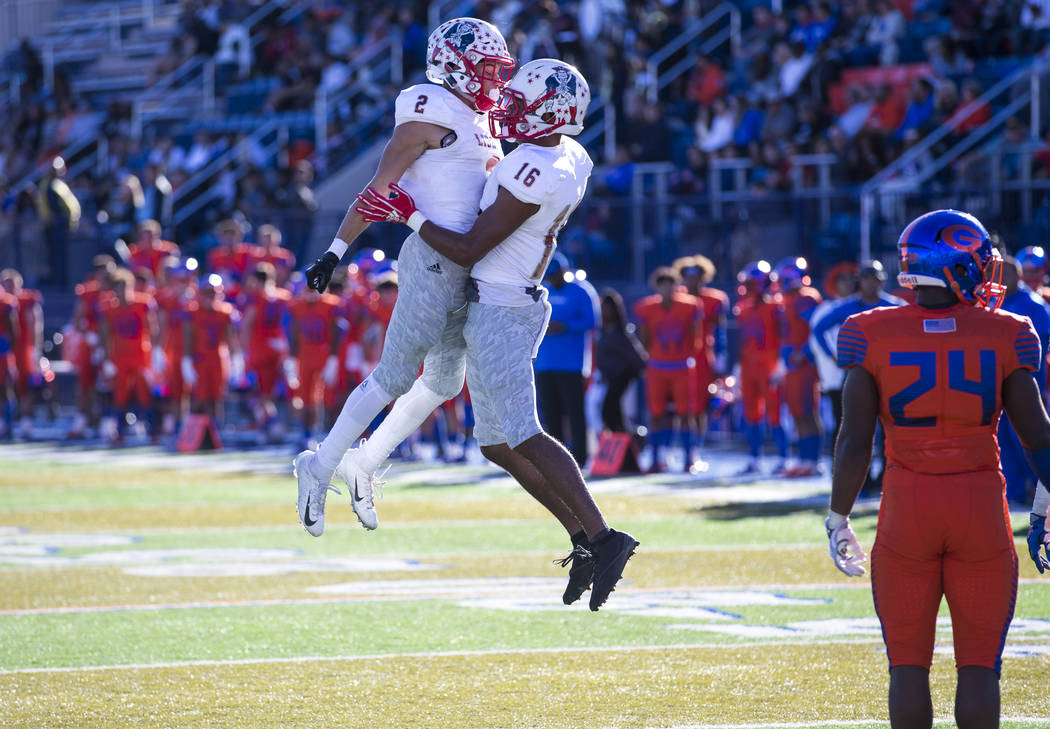 Over the past decade, it’s hard to argue against Liberty having been the state’s second-best football program.

The problem for the Patriots is they’ve had a giant roadblock in their way when it comes to breaking through for a state championship — Bishop Gorman. The Gaels have won each of the past 10 Class 4A crowns. In seven of those years, they’ve had to go through Liberty — three times in the state championship games and four more in the state semifinals.

What has become an annual playoff meeting will take place in the Desert Region championship game at 7 p.m. Friday at Liberty.

“As much as I’m sure people think they’ve got to go through us to win state, which is true, we’ve got to go through them, too,” Gorman coach Kenny Sanchez said. “They’ve done a really good job over the years. (Liberty coach Rich) Muraco has been lights out in this city.

“We get fired up for this game. We know it’s not going to be an easy one, and we prepare as such.”

The teams met in last year’s regional final, which doubled as a state semifinal. It was the closest of the recent meetings, a 42-28 Gorman win. The Gaels scored the first 28 points of that game, but the Patriots closed to within 28-13 by halftime and had the ball down by two scores in the fourth quarter.

Liberty has one advantage it hasn’t in any of those other games, playing on its home field, based on the regional home-site rotation. All of the others were played at Gorman or a neutral site.

“It’s very exciting to get them on our field — finally,” Liberty receiver Maurice Hampton said. “We’ll have home-field advantage, so we get to have our home fans, and our friends and family, everybody, can come out and watch us play and hopefully make history.”

Both teams have taken similar roads to this point, as they usually do. Neither played an in-state foe until league play began, and both have dominated each game in their respective leagues and their two playoff tilts.

The difference is how they fared in their early-season slate. The Gaels, who are ranked No. 13 in the USA Today Super 25, were 3-1, with their only loss coming in Hawaii against a St. Louis team that is undefeated and ranked No. 6 in the same poll.

Liberty struggled against its out-of-state schedule, going 0-5. Four of those games were against teams that began the season ranked in the top 40 in the nation, but they made a change at quarterback to Daniel Britt that has changed the dynamic of its offense.

The junior has completed 79 percent of his passes for 1,636 yards and 18 touchdowns against only one interception. He’s also second on the team with 540rushing yards and nine scores on 64 carries.

“We faced a couple (dual-threat) quarterbacks early in the season,” Gorman linebacker Brian Certain said. “We’ve practiced on that many times. We have to condense the hole, condense the pocket, and then break down and make the tackle.”

Britt gave the Liberty offense its needed spark, and its defense has handled the rest. The Patriots had six consecutive games in which they allowed eight points or fewer before last week’s 52-21 win over Foothill, a team they shut out 38-0 in the regular season.

They’ll need to heed those lessons Friday. In its eight games during the Southwest League and the playoffs, Gorman has outscored its opponents 462-20. The Gaels’ closest game during that time was last week’s 42-7 win over Green Valley. They led that game 42-0 at halftime before pumping the brakes.

“We’re super excited because we worked really hard for it,” Liberty tight end Moliki Matavao said. “We had a super tough opening schedule against national teams all getting us ready for this game. This game is our Super Bowl, you could say, and we’re ready. We’re going to come out hard and try to go out and get a state championship.”

The winner of Friday’s game will meet the Northern Region champion in the state semifinals. The Northern Region championship game will be played Monday after an outbreak of whooping cough at Damonte Ranch postponed the playoffs. Damonte Ranch defeated Reed 28-12 on Wednesday. The Mustangs will face Bishop Manogue for the region title and would be on their third game in 11 days if they reach the state semifinals.