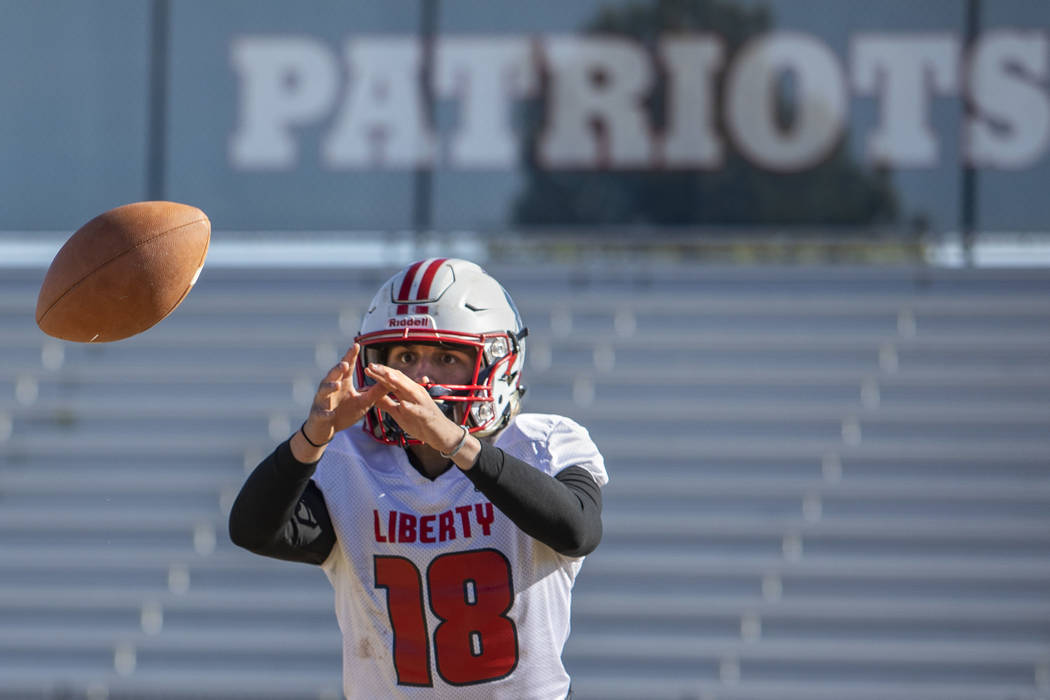 Liberty's quarterback Daniel Britt (18) is about to catch the ball during practice on Tuesday, Nov. 26, 2019, at Liberty High School in Henderson. (Ellen Schmidt/Las Vegas Review-Journal) @ellenkschmidt_ 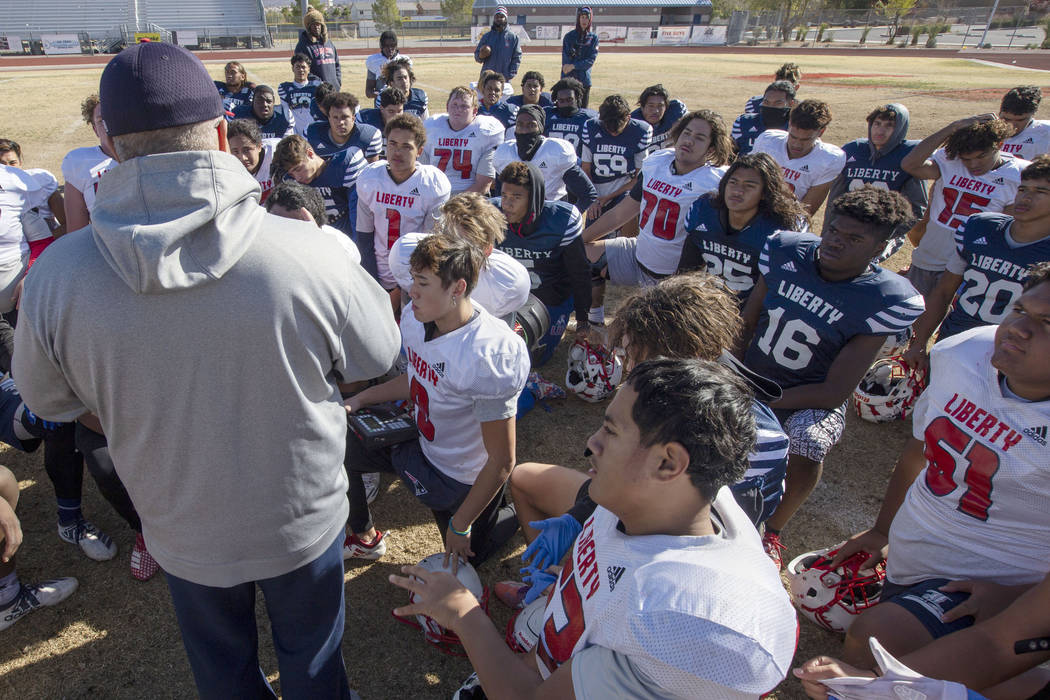 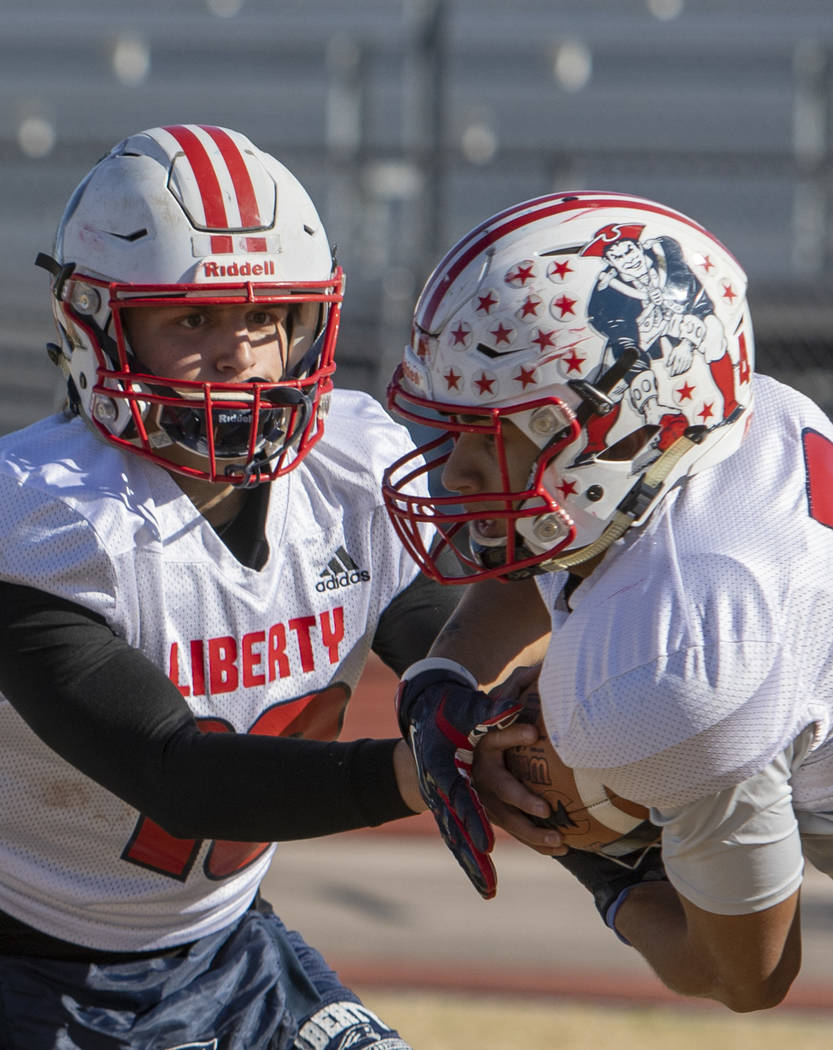 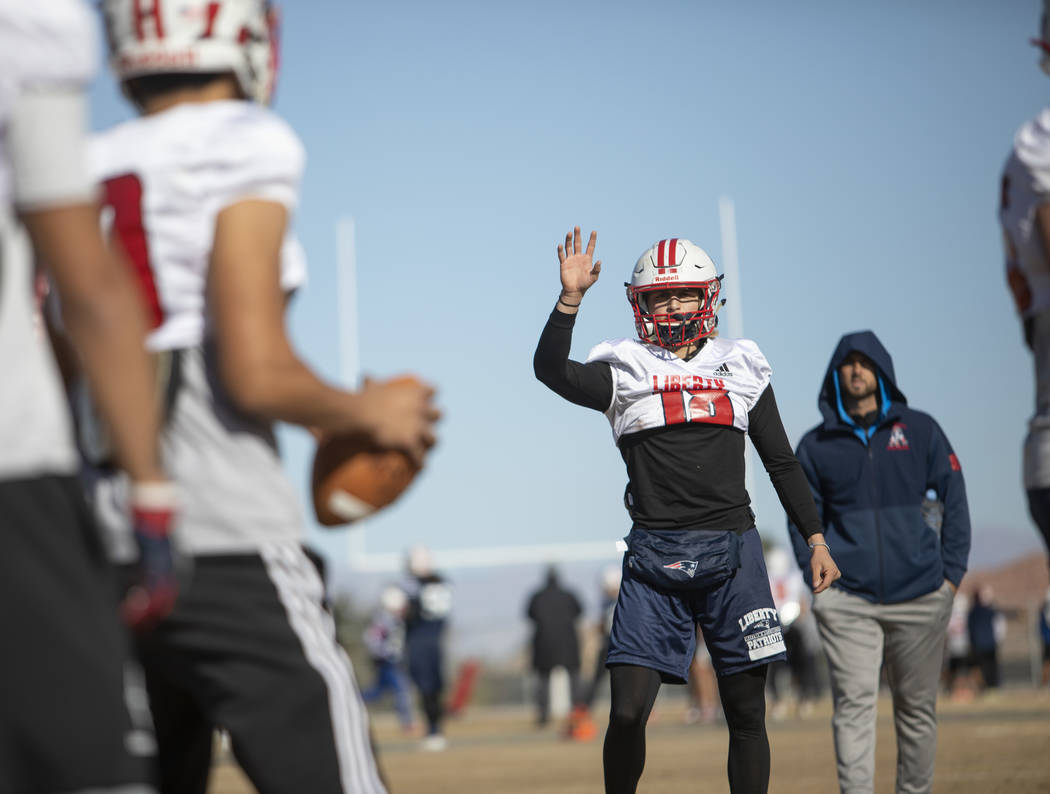 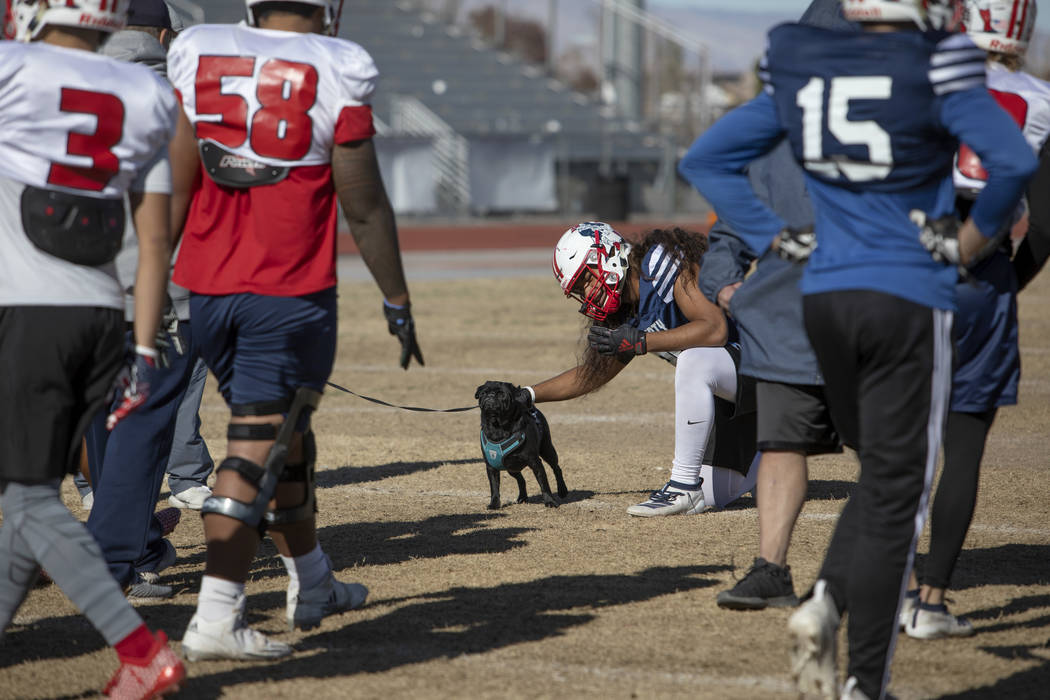 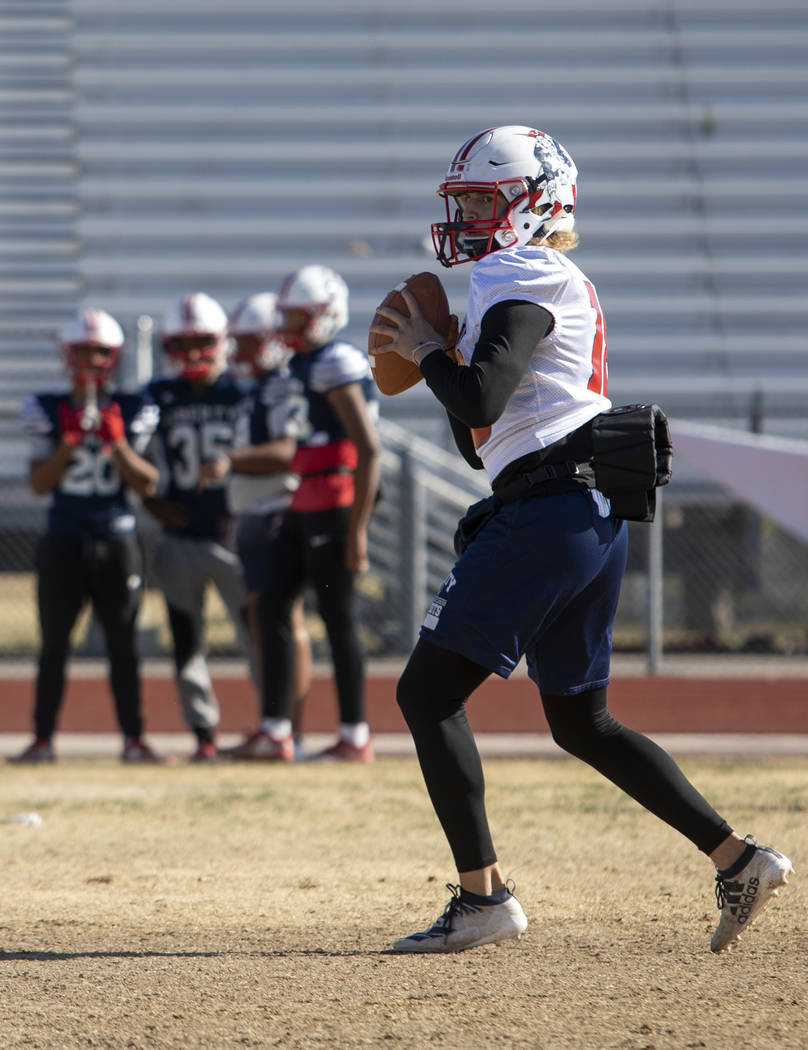 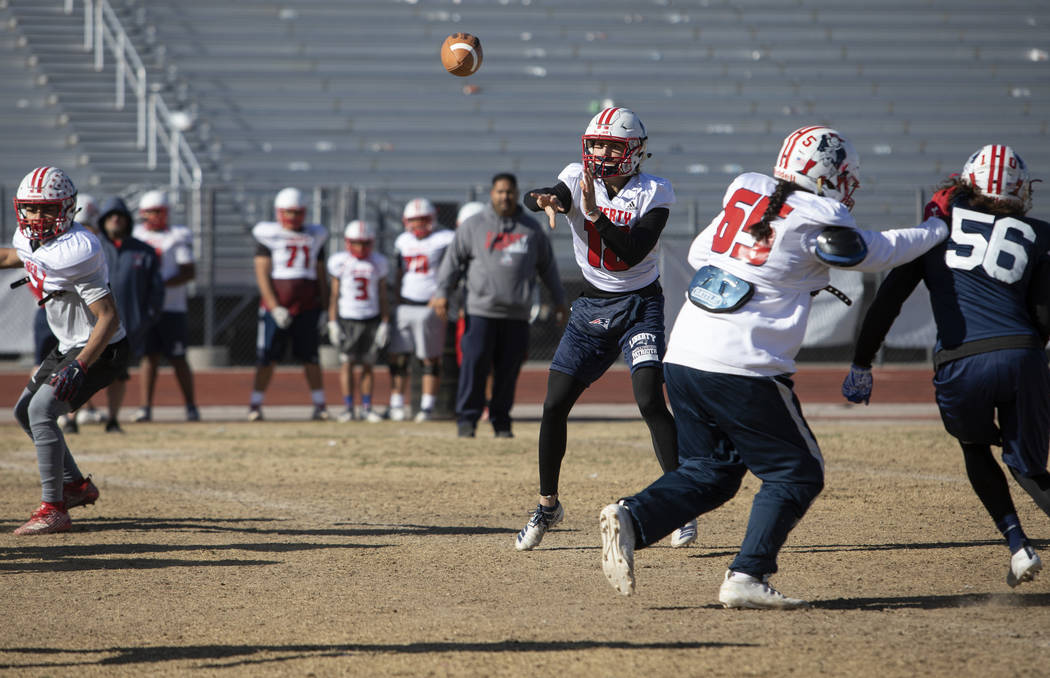 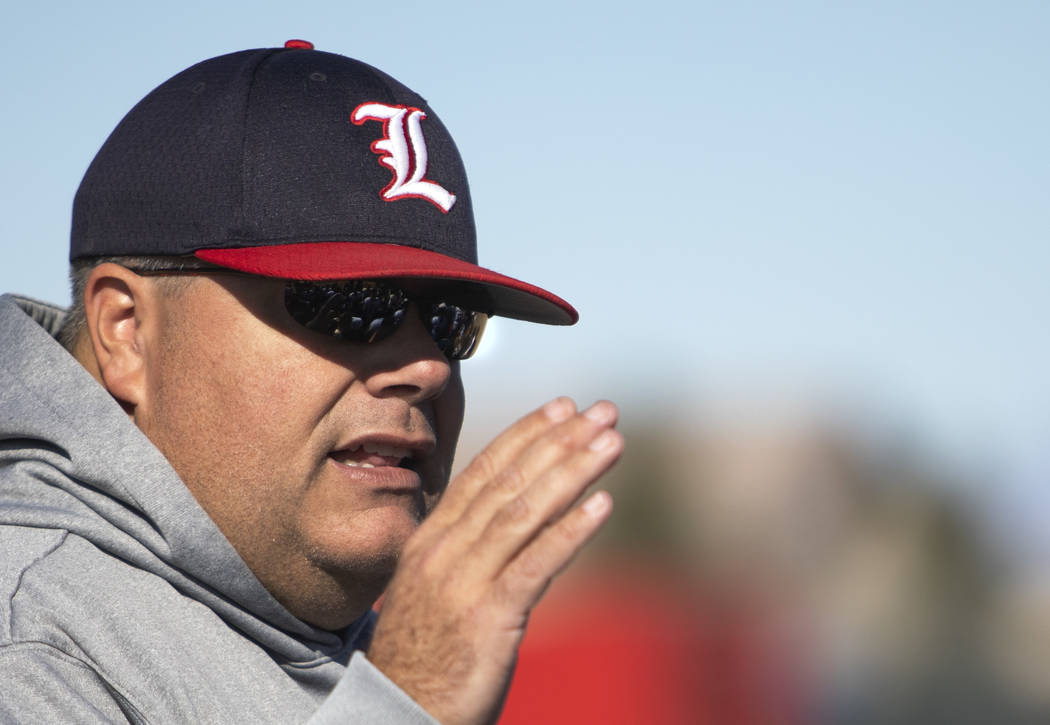 As Liberty coach Rich Muraco and his coaching staff plotted a course forward during the team’s bye week, it was clear some changes had to be made.

It wasn’t the Patriots’ 0-5 record that concerned the coaches the most. It was a potential matchup eight weeks down the road. Muraco asked the coaches, “What do we need to do to beat (Bishop) Gorman?”

“I actually said that to the coaches,” Muraco said. “If we don’t make some changes and fix some things, there’s no way we’re beating Gorman this year.”

The changes the Patriots made had the desired effect. Liberty beat Gorman 30-24 in overtime Friday night to secure the Desert Region title and end the Gaels’ 10-year stranglehold on the state championship.

That win also kept Liberty’s hopes for its first-ever state championship alive, and it will travel to Reno on Saturday to meet Bishop Manogue on its home field. Kickoff is set for 1:10 p.m.

“I asked the guys if anybody had heard of having a hangover after a big win, and some of them said they have,” Muraco told his team Monday. “I said, ‘Well, we can’t let that happen to us.’ We’ve got to focus on winning this week up in Reno.”

The win over Gorman was the Patriots’ eighth straight since that busy bye week. They made changes that solidified the offensive and defensive lines. They moved Lehi Ausage from safety to cornerback, and he has nine interceptions.

But the biggest change came at the quarterback position. That’s where Daniel Britt was inserted, despite the fact that Muraco didn’t think Kanyon Stoneking had played poorly. He wanted to see how his team would fare with more of a running threat.

Britt rewarded his coaches with 665 yards and 10 touchdowns rushing, but his passing has been a revelation for the Patriots. He’s hit nearly 80 percent of his passes for 1,748 yards and 19 touchdowns with one interception.

He also has been able to draw upon the experiences of Stoneking and Lonenoa Foa, who has had limited time this season after offseason surgery to repair a torn ACL he played on the last half of last season.

“It was good knowing I’d sat behind Kanyon and Lonenoa for a little bit,” Britt said. “Those guys were able to help me become a better quarterback. I went through my progressions with them every week at practice, and when they called my name I was ready.”

Muraco wasn’t sure throughout the summer whether he’d have Britt available at all this season. On a play during one of the last spring practices, Britt slipped while giving a handoff, and the running back’s elbow hit him in the cheekbone and eye socket.

Britt had surgery and four plates inserted in his face, but he was cleared on the first day of padded practice in the fall. It was Britt at the helm of the offense after the bye and in the Gorman game.

The Patriots trailed 17-3 against Gorman at halftime, but there was no panic. One of the team captains, senior lineman Alofaletauia Maluia, addressed the team and pointed out what Liberty needed to fix.

The Patriots made corrections and got the game to overtime, then Zyrus Fiaseu closed the victory with a 7-yard touchdown run that set off an electric celebration.

“I’ve been a Patriot Kid since I was in first or second grade, and it was always about beating Gorman,” Fiaseu said. “Even as a kid, I thought I’ve got to be the first one to do it if they can’t do it before then.”

Senior captain Toa Tai had the same goal since he was young and watched his older brother help Liberty to its first-ever playoff appearance 10 years ago.

Tai and his teammates have cleared the Gorman hurdle this time, but two big ones remain. The Patriots are 1-2 in state semifinal trips to Reno, and they could deal with inclement weather after their long bus ride. Should they get through that, they’ll meet the winner of the other semifinal between Centennial and Desert Pines for the state title.

“My brother (and his Liberty team) started the legacy,” Tai said. “Me being the youngest brother, I had to come back and finish it. (Gorman) was a big hump we needed to get over, but we still have the ultimate goal of winning the state championship.”