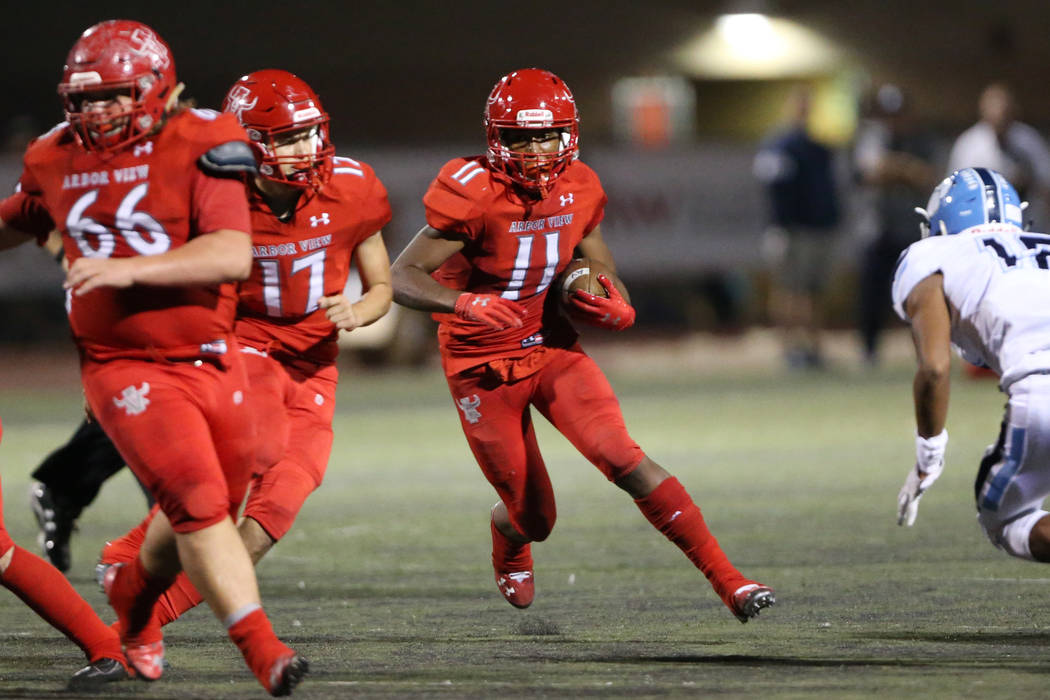 Centennial went on the road and beat Arbor View to announce itself as the early favorite to win the Northwest League.

That status lasted until the Bulldogs’ next league game, when Faith Lutheran handed them their first loss. In doing so, the Crusaders wrested favorite status away.

Such is life in a league like the Northwest, which has become known around the valley as the black and blue division.

“It’s a great league,” Centennial coach Dustin Forshee said. “They call it the black and blue division for one because we have two double-wing teams and a flexbone team that run the ball. But it’s also called black and blue because we beat each other up.”

It’s been Arbor View doing most of the beating . The Aggies have won the league five years in a row, and their opening loss to Centennial ended a 26-game winning streak in league play.

Arbor View has since rebounded with a win over Bonanza and a come-from-behind, overtime win over Cimarron-Memorial. The Aggies have a chance to re-establish a place at the top Friday, when they play host to Faith Lutheran.

“We’ve been the Northwest League champs the past five years, and each year it’s been a battle,” Arbor View coach Matt Gerber said. “The great thing about this league is it’s going to get you prepared for the playoffs. The teams that come out of the Northwest League are battle-tested.”

Faith Lutheran is already battle-tested after a difficult non-league slate that had it playing out-of-state competition. The Crusaders stumbled to an 0-3 start and had to endure questions about whether it had taken a step backward this year.

Their win over Centennial quieted some of that discussion. Another over Arbor View would likely silence it completely.

“Every league game is crucial. To get that win (over Centennial) was huge. We knew the run Centennial was on, so that was a respect game for us in the league and the city,” Faith Lutheran coach Vernon Fox said. “We looked at some of the rankings, and we needed to show we haven’t fallen off and we’re still here.”

The tough part about playing in a league like the Northwest isn’t having to face a great team or two. It’s the parity with quality programs that means at least one strong team won’t get a chance to test its mettle in the postseason.

That makes a missed opportunity even more difficult to overcome for teams like Cimarron-Memorial, which couldn’t hold a 20-7 lead in the fourth quarter against Arbor View last week,and is tied at the bottom of the league with Bonanza at 0-3.

“I love being a part of (the league),” Cimarron-Memorial coach Shane Kanie said. “It’s one of the toughest leagues in town, and I think our performance last week proves anyone can be beaten on any given day. It’s kind of like the Pac-12 in that anyone can lose at any time.”

Forshee compared it to the SEC, but the sentiment was the same. It’s a grind every week, especially for those trying to climb to the top.

Arbor View, Centennial and Faith Lutheran will be done facing one another after this week. While they’re beating each other up at the front end of the schedule, Palo Verde has flown under the radar. Like Faith Lutheran, the Panthers are 2-0 and atop the league’s standings. They had the opportunity to get healed up with a bye last week after a 36-35 overtime win against Shadow Ridge.

But Palo Verde coach Joe Aznarez knows his schedule is backloaded. So his Panthers’ wins over Bonanza and Shadow Ridge don’t have him getting his team ready to hoist the league’s championship trophy.

For Shadow Ridge’s part, it knows letting that game against Palo Verde get away was severely damaging to its playoff chances. But coach Travis Foster, like the league’s other coaches, is happy his team is part of the Northwest.

“A couple of years ago they broke up the league for competitive balance, and it was a joke,” Foster said. “We were 1-9 and got in the playoffs because four teams made it from a five-team league. They put the Northwest League back together (in this realignment), and that’s the way it needs to be.”