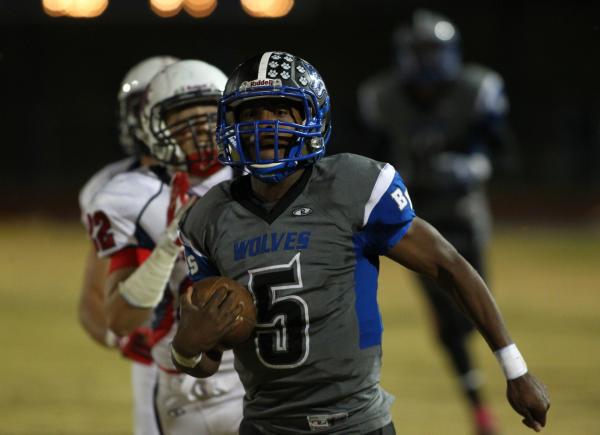 Basic’s Antraye Johnson gets past Coronado to score a touchdown on Friday. Johnson rushed for 288 yards and two TDs, and passes for 152 yards and two scores in a 35-27 win.

Antraye Johnson can’t do anything but wait.

Johnson, a senior at Basic High School, is waiting to receive a Division I scholarship offer after a strong season on the football field. However, those schools are waiting to see if the 5-foot-10-inch, 175-pound standout qualifies academically.

It’s all part of a recruiting waiting game less than three weeks before the first day football players can sign a national letter of intent.

Johnson, a two-star recruit and the No. 10 prospect in the state by Rivals.com, threw for 1,676 yards and 11 touchdowns while adding 1,205 yards and 13 TDs on the ground for the Wolves. He also returned three kicks for scores.

Johnson was the Southeast League’s co-Offensive Most Valuable Player and a first-team all-state selection as an athlete. He is listed as an athlete by most recruiting services, but Cahill said he thinks Johnson’s quarterbacking days are over.

“He’ll probably be a slot receiver or a third-down (running) back,” Cahill said. “And he’ll be returning kicks.”

Cahill said UNLV has shown the most interest in Johnson since the end of the season. If Johnson does not receive a qualifying test score, he will play next season at a junior college, according to Cahill.

“We’ll start making calls and see what’s the best fit for him,” he said.

The signing period for football begins Feb. 5 and ends April 1.

The 6-3, 245-pound Army recruit made 56 tackles and seven sacks this season for the Patriots.

The game features 70 of the top players of Polynesian descent. Players from 11 states along with American Samoa are scheduled to participate.

■ THOMPSON EARNS ACCOLADES — Coronado setter Cali Thompson was named one of 25 finalists for PrepVolleyball.com’s National Sophomore of the Year award.

Thompson guided the Cougars to the Division I state title in November, averaging 10 assists (997 total) while adding 108 aces, 138 digs, 52 blocks and 51 kills.

Thompson earlier was named the Southeast League and Sunrise Region Most Valuable Player, and she was a member of the All-Southern Nevada team.

■ BADGER HONORED — Centennial senior Sydney Badger won the Gatorade Nevada Girls Cross Country Runner of the Year award and now is eligible for the national award to be announced this month.

Badger captured the Division I individual state title in November at San Rafael Park in Reno. She is the first runner from Centennial to win the Gatorade award.