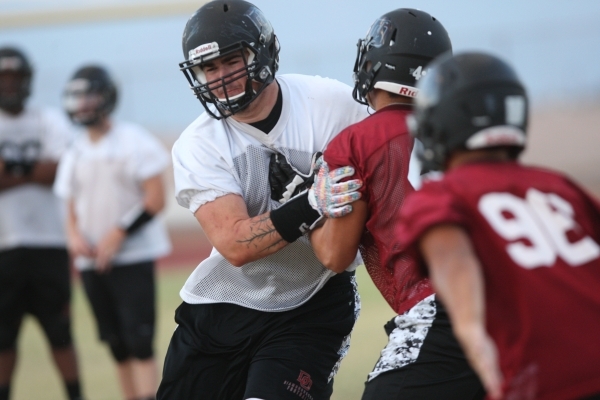 Jack Crane’s dream of earning a college scholarship started to slip away after his junior football season at Desert Oasis.

But after rededicating himself to the sport this summer, Crane is back on recruiters’ radars.

“My mindset was I wanted to get a free education, and I put in the work,” Crane said. “I felt a big difference from last season to this season. I felt better about myself. I felt more confident in my games.”

Crane missed two games last season because of a concussion and didn’t have much film to show recruiters as the Diamondbacks struggled to a 2-8 record.

This summer, he worked out with trainers at Athletic Gaines and Phase 1 Sports to improve his strength and agility. He also attended the Sound Mind Sound Body camp in June in Macomb, Michigan, to gain more exposure.

Crane paved the way for one of the top rushing attacks in the Sunset Region this season, as the Diamondbacks (7-4) averaged 234.2 yards per game.

“His commitment and his work ethic this summer was a little bit of a slingshot to the recruiting process,” first-year Desert Oasis coach Brad Talich said. “He worked extremely hard, and he continues to work his tail off for what Jack envisions for the future. He’s not sitting on it.”

Talich said Crane is being recruited by Tulane and also is hearing from Northern Arizona, Adams State (Colo.), Central Arkansas, Chadron State (Neb.) and Nebraska-Kearney, among others.

Crane, who plans to major in business, is scheduled to visit Central Arkansas this weekend and said he will visit Tulane on Nov. 27.

“I feel like I showed a lot more aggressiveness than I showed last year,” Crane said. “That was a big thing that I struggled with was being aggressive on the field, and I feel like this year was a big year for that.”

Landman, a 6-8 forward, is a transfer from Clemens (Ala.), and he averaged 12 points, eight rebounds and three blocks as a junior. He played his first two seasons at Arab (Ala.).

McCullough was injured with 4:53 remaining and taken by ambulance to a hospital. The game was delayed for about 20 minutes, and both teams gathered at midfield and took a knee as McCullough was being treated.

“He was released from the hospital that night,” Redmond said. “He’s home resting and doing better. He’ll be fine.”

Green Valley’s boys soccer team fell to No. 15 in the USA Today/NSCAA Region VIII poll after the Gators lost to Wooster in the state semifinals last week.