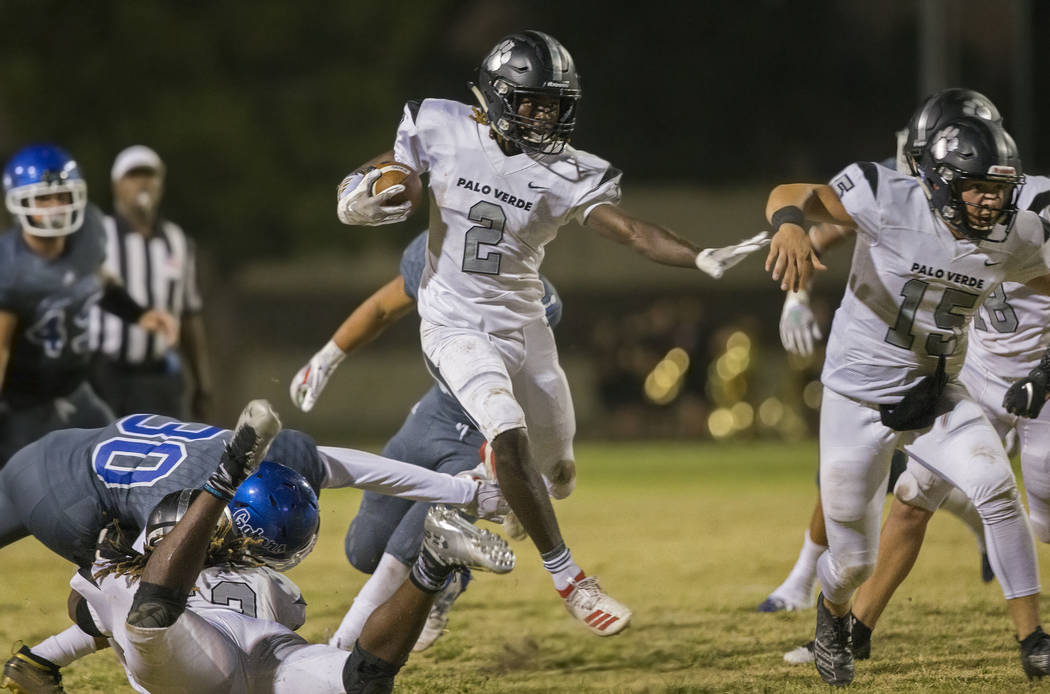 Palo Verde (6-1, 3-0 Northwest League) has taken care of business so far in league play, but its schedule ramps up in the final three weeks. First up is Centennial (6-1, 2-1), which escaped with a 24-21 win over Shadow Ridge last week and is well-versed in the double-wing attack Palo Verde runs having faced a similar scheme against Arbor View. Charron Thomas leads Palo Verde with 838 yards and nine touchdowns rushing, while Centennial’s Jordan Smith has 825 yards and 12 TDs on the ground.

Something has to give in this game. The Legacy offense is rolling, scoring nearly 36 points per game; Desert Pines’ defense is allowing seven a game. Legacy (4-3, 1-1 Northeast League) has the valley’s leader in passing yards in Evan Oleas with 2,024, and he’s added a team-best 639 yards rushing. He has 27 total touchdowns. Aaron Holloway is the valley’s top receiver with 909 yards. Rjay Tagataese has been a huge addition for Desert Pines (6-0, 2-0) at QB, and he’s thrown for 1,428 yards and 20 TDs.

Desert Oasis vs. Clark (At Bonanza)

Clark was the early story of the season with a five-game winning streak that shocked the valley. The Chargers (5-3, 2-2 Southwest League) have dropped two straight since then, and this is a must-win for their playoff chances with Bishop Gorman looming in the season finale. Desert Oasis (5-3, 2-2) clinches a playoff spot with a win.

Two teams looking to overcome devastating losses meet in this one. Shadow Ridge (3-4, 2-2 Northwest League) has dropped its two league games by a combined four points, including a 24-21 defeat to Centennial last week. Faith Lutheran (3-4, 2-1) came back from 14 points and tied Arbor View, but the Aggies scored a late touchdown for a 24-17 decision that took the Crusaders out of the league lead.