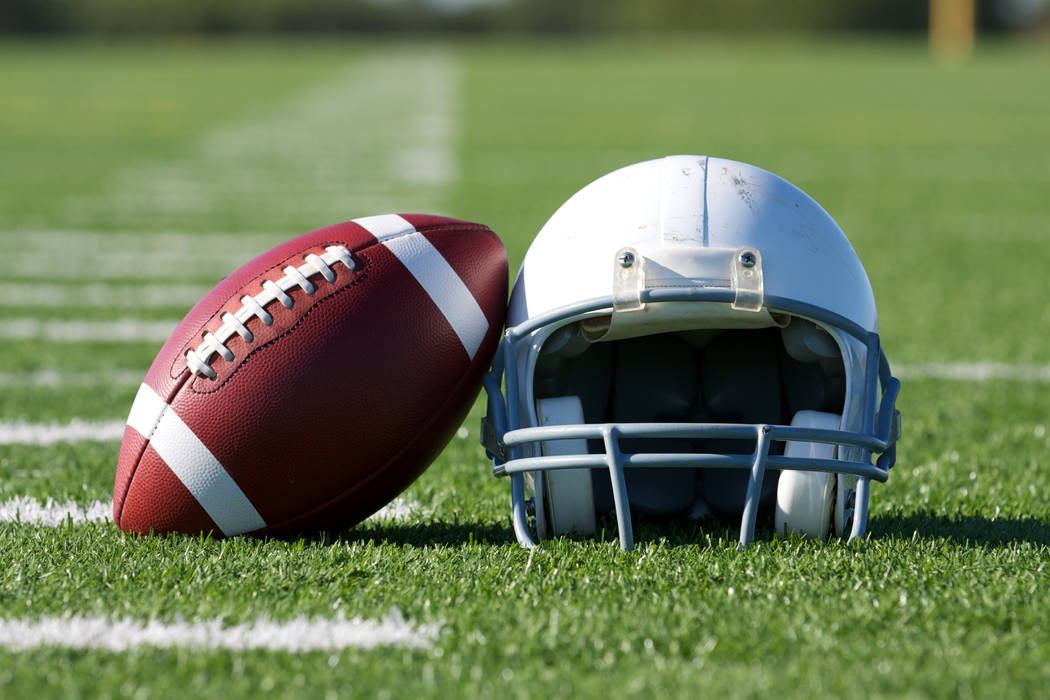 Koy Riggin threw two touchdown passes and ran for another, and Foothill held on for a 29-27 home win over Canyon Springs on Friday night.

The Pioneers (0-1) scored with 29 seconds left to pull within two, but Kevin Plumlee knocked away a pass on the ensuing 2-point conversion attempt. Canyon Springs recovered the onside kick, but Foothill (2-0) got a final stop to hang on.

Thomas Fisher-Welch caught both of Riggin’s scoring tosses, and Kendrick Thomas added a rushing touchdown for the Falcons.

Martin Blake added 10 carries for 101 yards and a touchdown and added a TD recpetion for the Pioneers.

■ St. Louis 31, Bishop Gorman 19 — At Honolulu, Jayden de Laura threw for 296 yards and two touchdowns to help the Crusaders build a 21-0 lead they never surrendered in a battle of top-15 teams nationally.

No. 13 Gorman got as close as 21-13 in the third quarter, but that’s when disaster struck. A backward pass was picked up by one of its running backs, who didn’t realize it was a fumble and stopped with his back to the defense. He was popped, the ball came loose and Nick Herbig scored an 11-yard TD that restored a two-score lead for No. 12 St. Louis.

■ Mililani 34, Liberty 22 — At Mililani, Hawaii, Brendyn Agbayani threw for two scores, Jasiah Alcover added two on the ground as the Trojans rallied from an early 16-0 deficit.

The Patriots (0-2) scored on a 57-yard TD pass from Kanyon Stoneking to Edward Gastelum and a 27-yard interception return for a score from Dante Bowers Jr., both of which were followed by two-point conversions to build their lead. They were held out of the end zone the rest of the game, adding only Dillon Fedor field goals from 39 and 36 yards.

■ Las Vegas 49, Gateway (Colorado) 24 — At Gateway, Colo., J’quan Curtis ran for 125 yards and two touchdowns as the Wildcats rolled past the Olympians.

Victory David caught two touchdown passes, and Ja’Shawn Scroggins ran for a score for the Wildcats (2-0). The Las Vegas defense also contributed to the scoring when James Dunn recovered a fumble in the end zone for a touchdown.

■ Clark 14, Rancho 0 — At Durango, D’on Williams intercepted two passes to help the Chargers past the Rams.

Reyes Reynaga had 14 tackles for Clark.

Aaron Holcomb threw a 10-yard touchdown pass to Kenneth Cason in the first quarter, and My’Quel Johnson added a 30-yard scoring pass to LaTroy Howard in the fourth quarter for Clark.

■ Green Valley 39, Durango 3 — At Green Valley, Garret Castro threw two touchdowns passes and rushed for another to lead the Gators over the Trailblazers.

Noah Hawthorne rushed for a score and also hauled in a TD pass for Green Valley. Jaylen McNight had a rushing TD, and Brady Clayton added a receiving TD in the fourth quarter.

Stetler Harms, C.J. Hodgdon and Andrew Vasquez each had an interception to lead the Gators defense.

■ Silverado 49, Bonanza 6 — At Silverado, Jacob Mendez scored a touchdown rushing and receiving to help the Skyhawks win their season opener.

Savion Cunningham returned an interception for a touchdown, and Breven Palpallatoc, John Agounke and Brandon Tunnell rushed for a score each. Silverado ran through Bonanza (0-2) for more than 400 yards on the ground.

■ Desert Oasis 42, Valley 21 — At Desert Oasis, Christin Vaughn ran for 225 yards and three touchdowns, and Tyler Stott threw for three scores to lead the Diamondbacks past the Vikings.

■ Coronado 9, Moapa Valley 8 — At Moapa Valley, Austin Almeido kicked a 25-yard field goal in the fourth quarter as the Cougars rallied past the Pirates.

After Almeido’s field goal, the Cougars defense shut down two Pirates offensive series to hang on. Andrew Montez had 150 yards receiving and a touchdown catch on six receptions for the Cougars.

■ Del Sol 42, SLAM Academy 14 — At Del Sol, Damani Wilks threw for three touchdowns and ran for another score for the Dragons.

Wilks was 7-for-11 passing for 111 yards and two interceptions. He threw two scoring passes to Maalik Flowers and opened the scoring with a 35-yard scoring strike to Sheik Fofanah. Wilks also rushed for 58 yards.

Antowain Gentry also had an interception return for a touchdown for Del Sol (1-1) in the second quarter, putting the Dragons up 14-2.

Rich Biago had 90 rushing yards, including a 55-yard scoring run in the third quarter, which extended Del Sol’s lead to 28-8.

Rhodes added a rushing touchdown and returned a punt for another score to lead Sunrise Mountain.

Sierra Vista got a 30-yard touchdown run with 3:44 to play to break up the shutout and get its first points of the season.

Lincoln County’s Cody Zile completed 7 of 12 passes for 122 yards and two touchdowns but was picked off twice. His 18-yard scoring pass to Kobe Kelley in the second quarter and 1-yarder to Dylan Robinson in the third accounted for the team’s points.