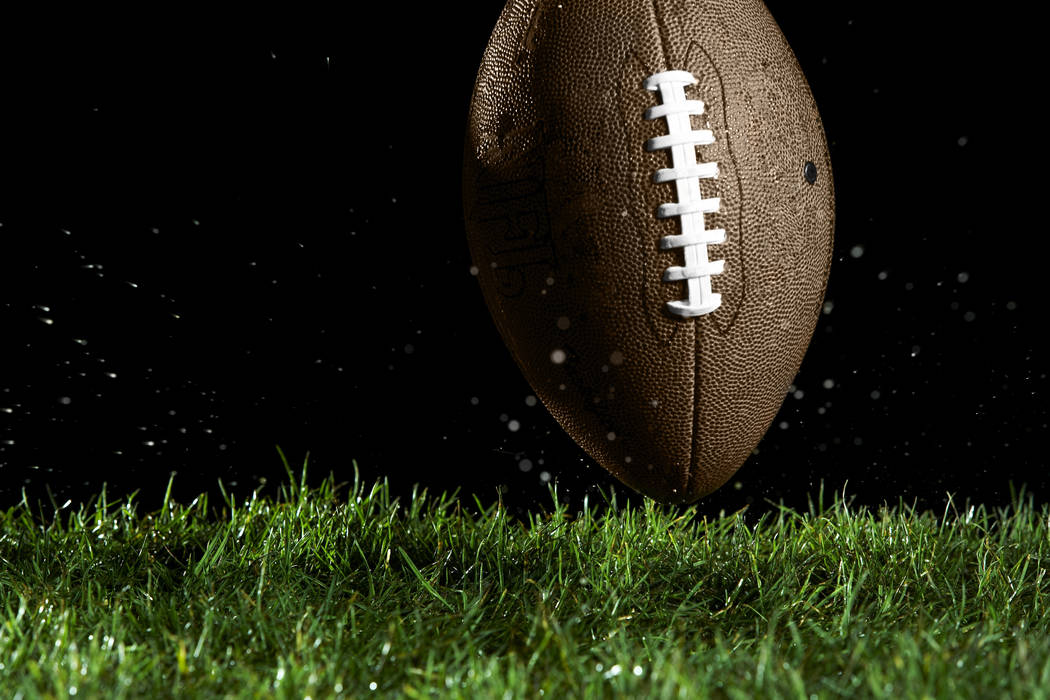 Centennial needed some late-game heroics to stay in the race for the Northwest League title.

Colton Tenney and Gerick Robinson provided them, when they connected on a 62-yard touchdown pass with 1:10 remaining as the Bulldogs rallied past Shadow Ridge.

The Mustangs (3-4, 2-2) took a 21-17 lead with 1:30 remaining before the Bulldogs recovered a squib kick at their own 38-yard line. One play later, Tenney connected with Robinson on the game-winner.

Garrett Castro threw for four touchdowns to double his season total and help the Gators to a Southeast League road win.

Malik Duncan ran for three first-half touchdowns for the Gators (4-4, 2-1). Duncan’s second score broke a 14-all tie, and his third sent Green Valley into halftime up 34-20.

Castro threw a pair of second-half TD passes to Ricci Patillo. He also had scoring strikes to Carlen Wallace and Colin Rerecich.

The victory moves the Gators into a tie for second place in league with Foothill. Those two teams meet at Foothill on Thursday.

At Desert Oasis, Tyler Stott threw for 275 yards and three touchdowns as the Diamondbacks rolled past the Grizzlies in a Southwest League contest.

Christian Vaughn ran for 177 yards and three touchdowns for the Diamondbacks (5-3, 2-2).

The win was important for the Diamondbacks playoff hopes after last week’s double-forfeit against Durango. Desert Oasis had three defensive starters suspended for this game. Jacob Walsh picked up his team with three sacks and four tackles for loss.

“All around, this was a great team win after a tough week, where we weren’t even sure we’d be allowed to play,” Desert Oasis coach Michael Ovens said. “We’re thankful to the (Nevada Interscholastic Athletic Association) for allowing us to play.”

At Palo Verde, Charron Thomas ran for three touchdowns as the Panthers rolled past the Spartans in a Northwest League matchup.

Amir McGruder also found the end zone three times three different ways – a rushing touchdown, a receiving touchdown and an interception return for a touchdown for the Panthers (6-1, 3-0).

Jahan Wright and Richard Gola-Collard also had interceptions for the Panthers.

At Legacy, Aaron Holloway had three receiving touchdowns, a rushing touchdown and returned a punt 95 yards for another score as the Longhorns routed the Sundevils in Northeast League action.

Eldorado (1-6, 1-1) picked up its first win last week but was no match for the explosive Legacy offense.

Rjay Tagataese threw for five touchdown passes in the first half as the Jaguars rolled past the winless Rattlers.

The Jaguars (6-0, 2-0 Northeast League) jumped on top early as Tagataese found Michael Jackson III for touchdown strikes of 24 and 55 yards in the opening quarter. Tagataese also hit hit Branden Thomas from 4 yards out and added a 52-yard TD pass to Deandre Moore as Desert Pines jumped out a 37-0 lead by the end of the first period.

Darrius Stewart and DeAvonte McGee also had rushing touchdowns for the Jaguars.

At Moapa Valley, Steele Skinner ran for two touchdowns as the Pirates took care of business in 3A Sunrise League action.

Skinner opened the scoring with a 10-yard run midway through the first quarter to put the Pirates up 7-0. Moapa Valley then (6-3, 3-1) then had rushing scores from Russell Bodily and Jamie Carvajal.

SLAM (2-7, 0-4) got on the board with a 13-yard scoring pass from Harris Engel to Isaiah Golden in the final seconds of the second quarter. Moapa Valley quickly answered with a 6-yard touchdown run from Skinner for a 28-6 halftime lead.

Chris Hoy added a 14-yard scoring run for the Pirates in the fourth quarter.

At Boulder City, Parker Reynolds threw for two touchdowns as the Eagles blanked the Rams in 3A Sunrise League action.

Reynolds, who was 13-for-18 passing for 181 yards, also threw for a trio of two-point conversions for the Eagles. Boulder City led 14-0 at halftime thanks to a 50-yard punt return for a score by Deavin Lopez and a 10-yard fumble return by Matthew Felsenfeld.

Reynolds helped the Eagles pull away in the third quarter with a 29-yard scoring strike to Devon Walker and a 30-yard touchdown toss to Scott Badhe.

Klyson Kaiwi picked off a pair of passes from the Rams (1-8, 0-4), while Trey Davis added nine tackles and a sack to help the Eagles record their third shutout in a five-game span.

At Sunrise Mountain, Wyatt Delano ran 183 yards and four touchdowns on 30 carries as the Bulldogs downed the Miners in Sunrise League play.

Meb Hollingshead ran for a score and threw a 23-yard TD pass to Will Barnum. Jason Abbott added a rushing touchdown for Virgin Valley (7-1, 4-0).

At Lake Mead, Mason Thornock ran for 259 yards and four touchdowns on 28 carries as the Lynx rolled past the Eagles in 2A South League action.

Hagen Boyce had 10 tackles and a sack, and Anthony Sinay had 10 tackles to lead the Lincoln County defense. Robinson also had two interceptions for the Lynx.