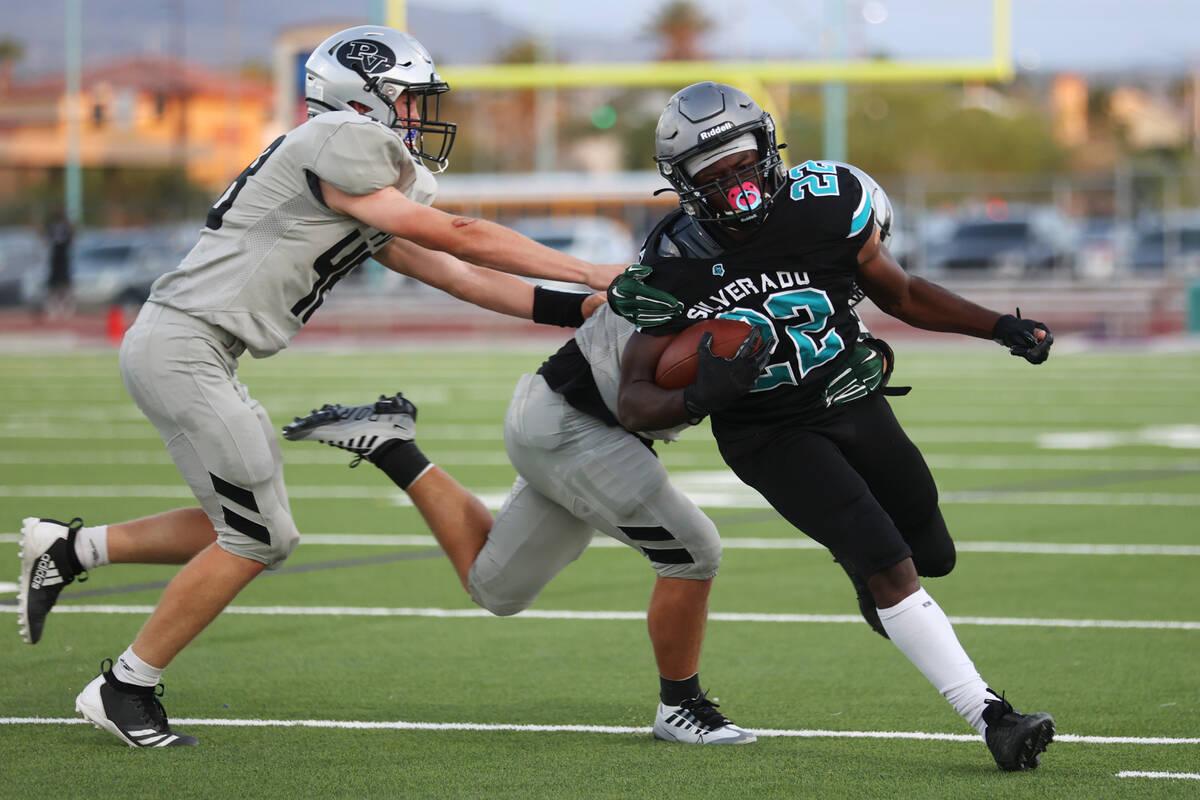 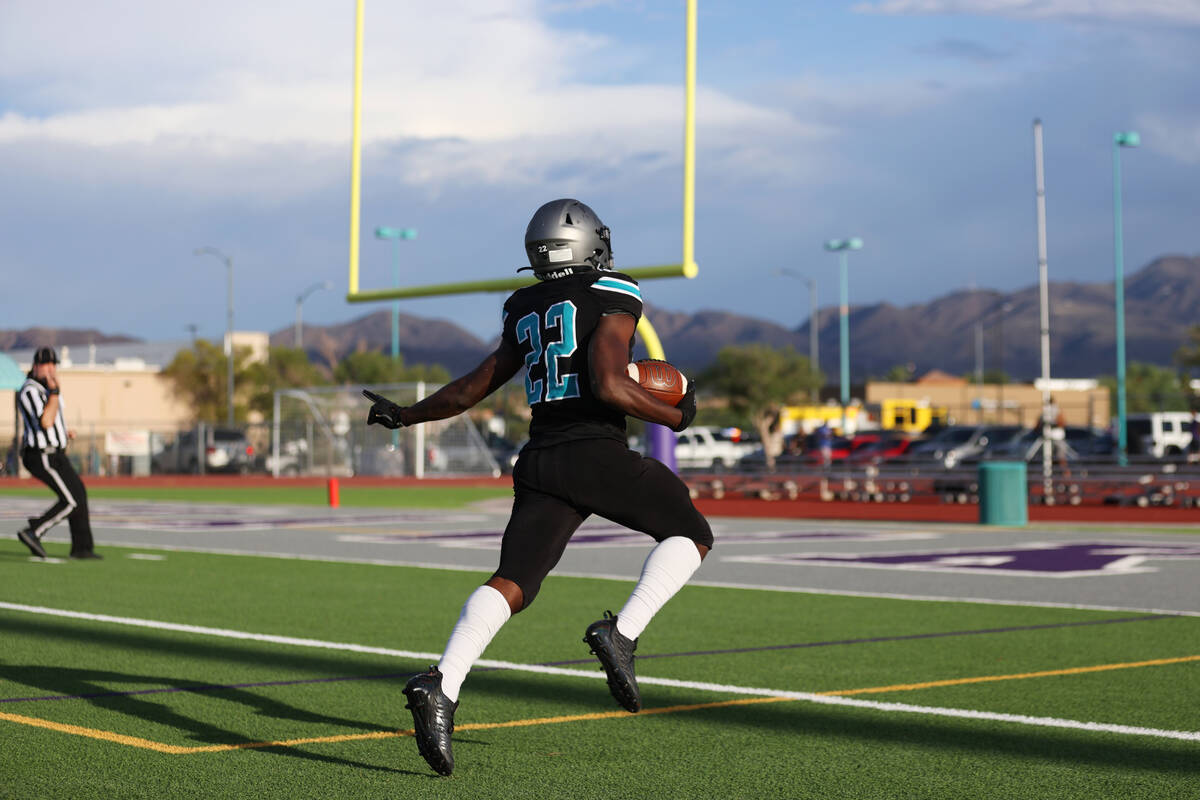 Silverado's Caden Harris (22) runs the ball for a touchdown against Palo Verde during the first play of the game in the first half of a football game at Silverado High School in Las Vegas, Friday, Sept. 2, 2022. (Erik Verduzco / Las Vegas Review-Journal) 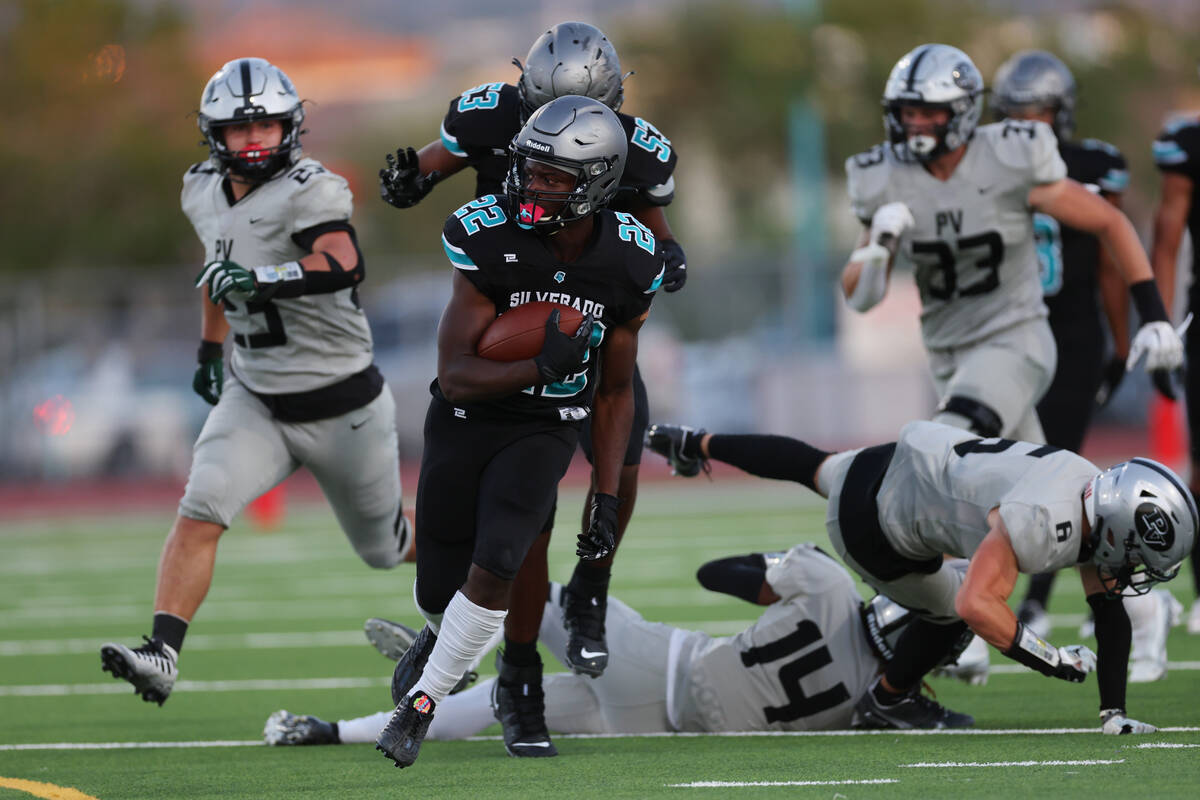 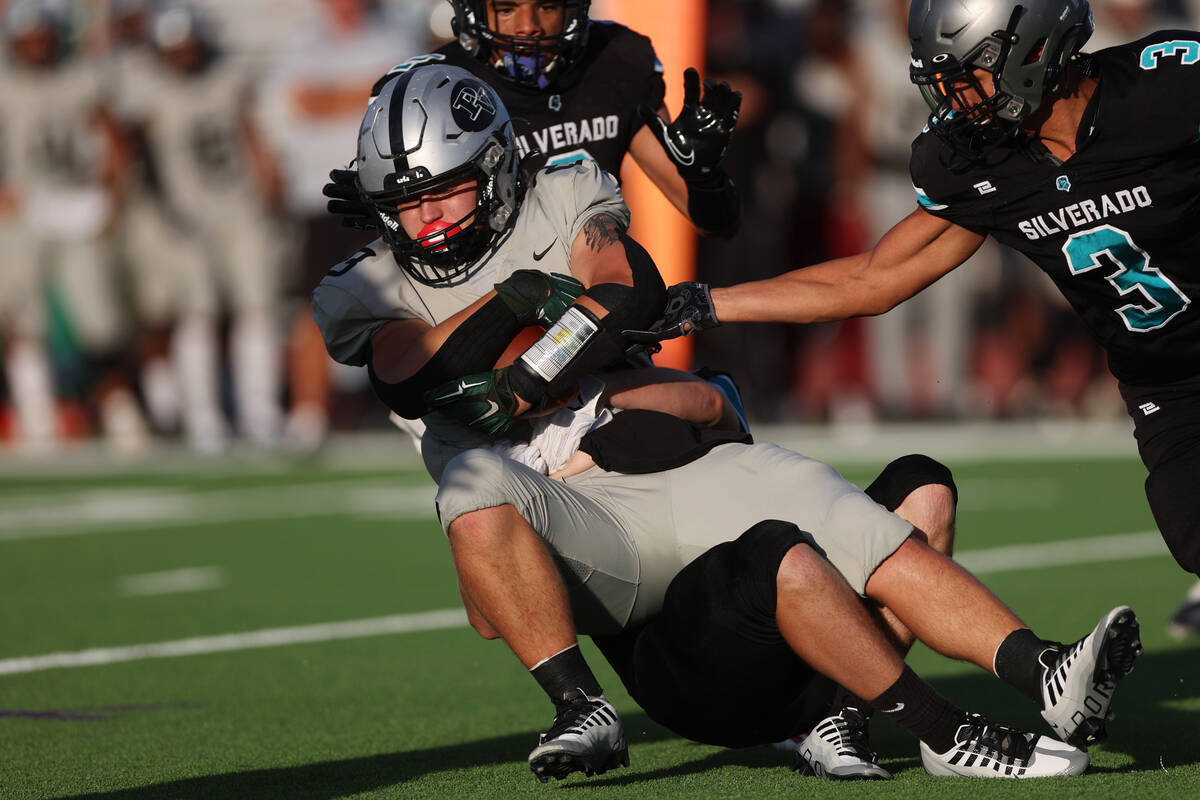 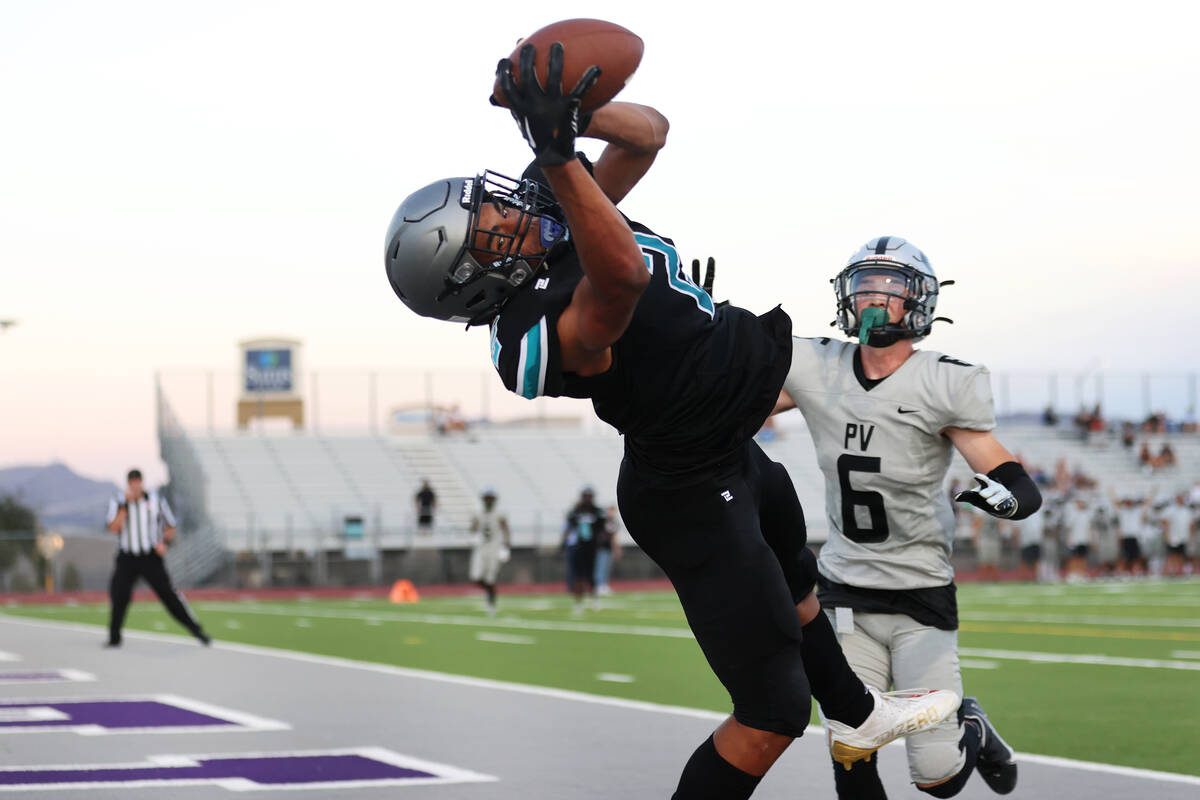 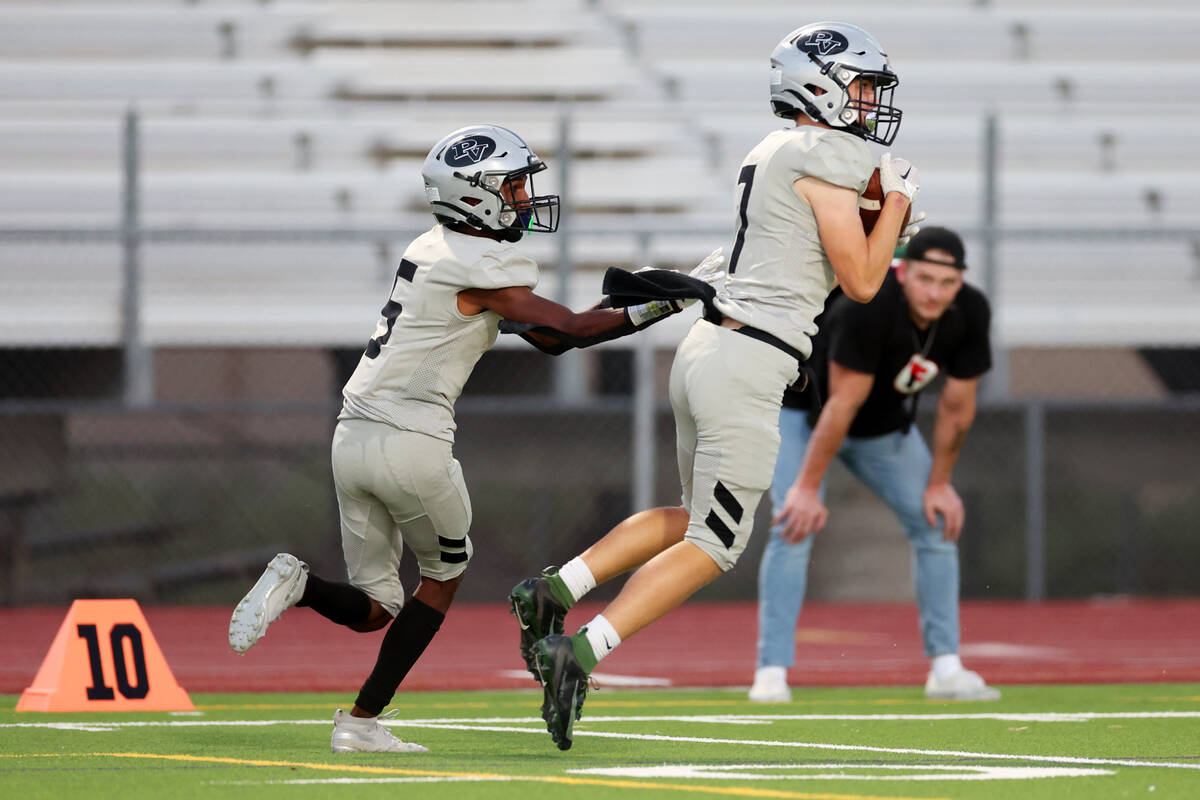 Palo Verde's Jace Neely (7) makes an interception as Omari Jones (5) looks on during the first half of a football game against Silverado at Silverado High School in Las Vegas, Friday, Sept. 2, 2022. (Erik Verduzco / Las Vegas Review-Journal) 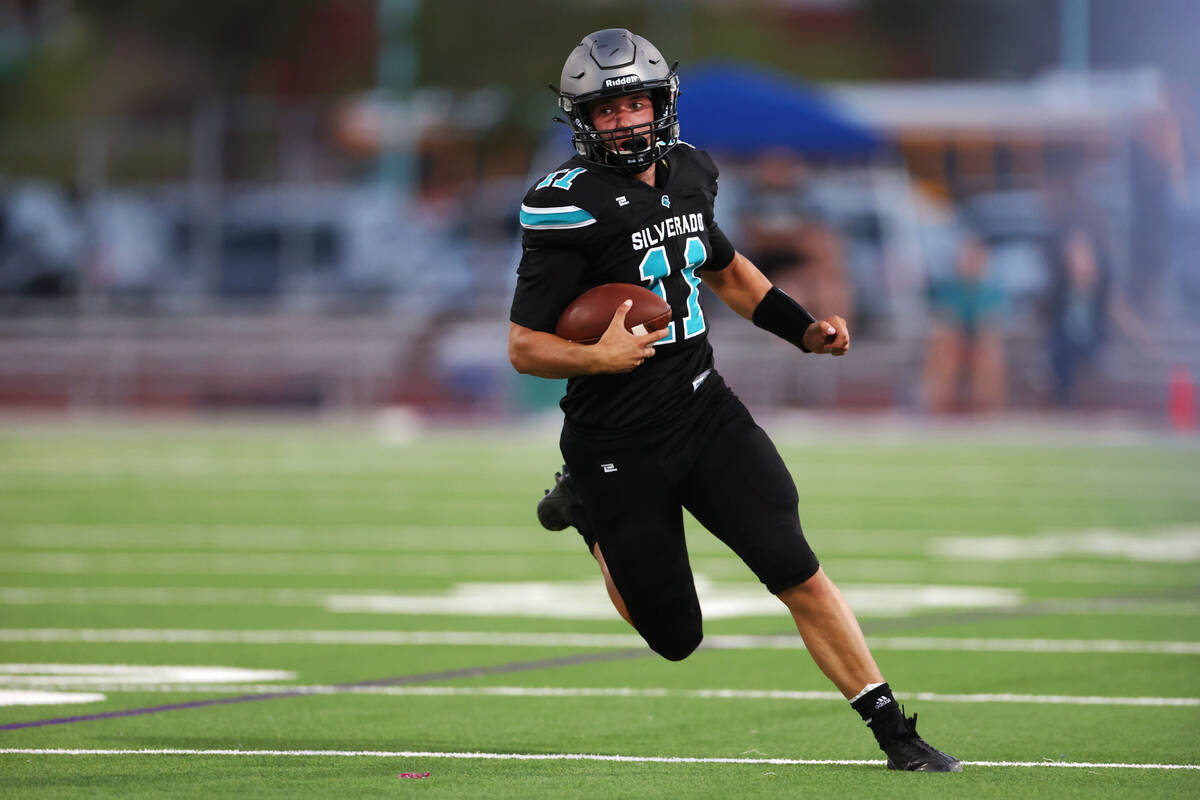 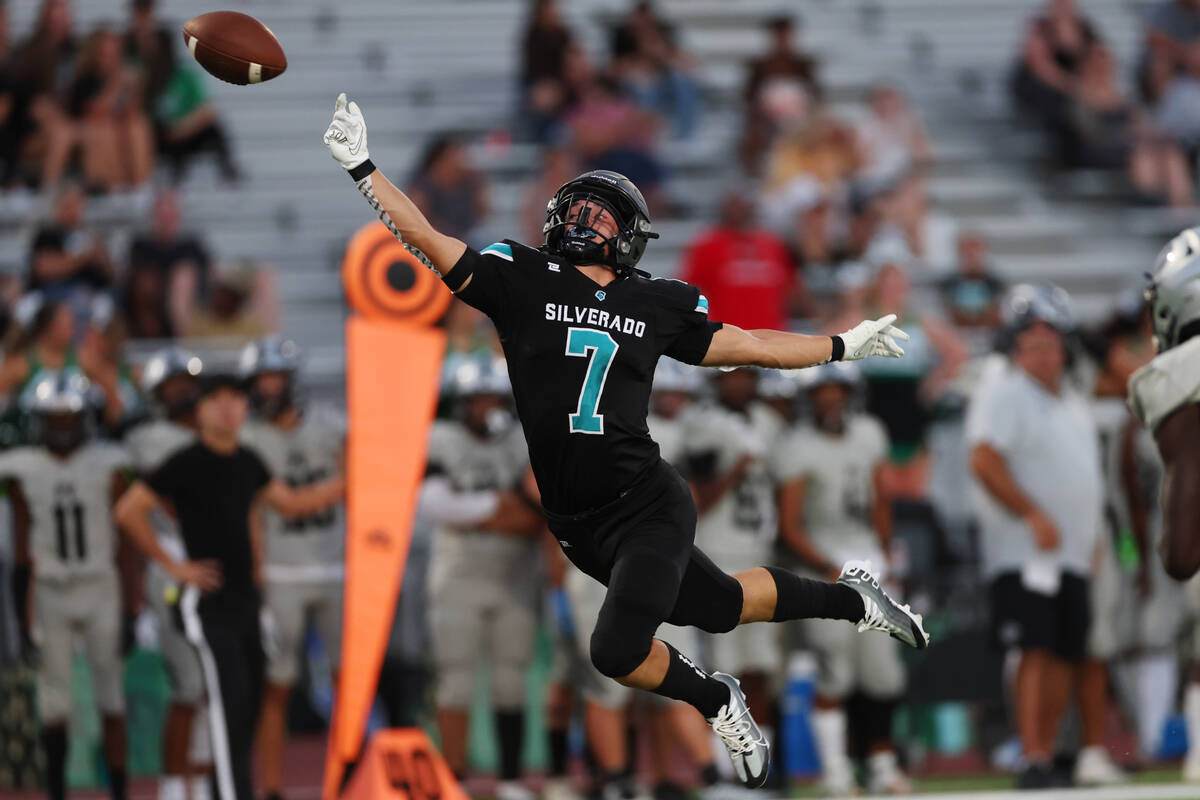 Silverado's Bryson Tunnell (7) reaches short of the ball for an incomplete pass during the first half of a football game against Palo Verde at Silverado High School in Las Vegas, Friday, Sept. 2, 2022. (Erik Verduzco / Las Vegas Review-Journal) 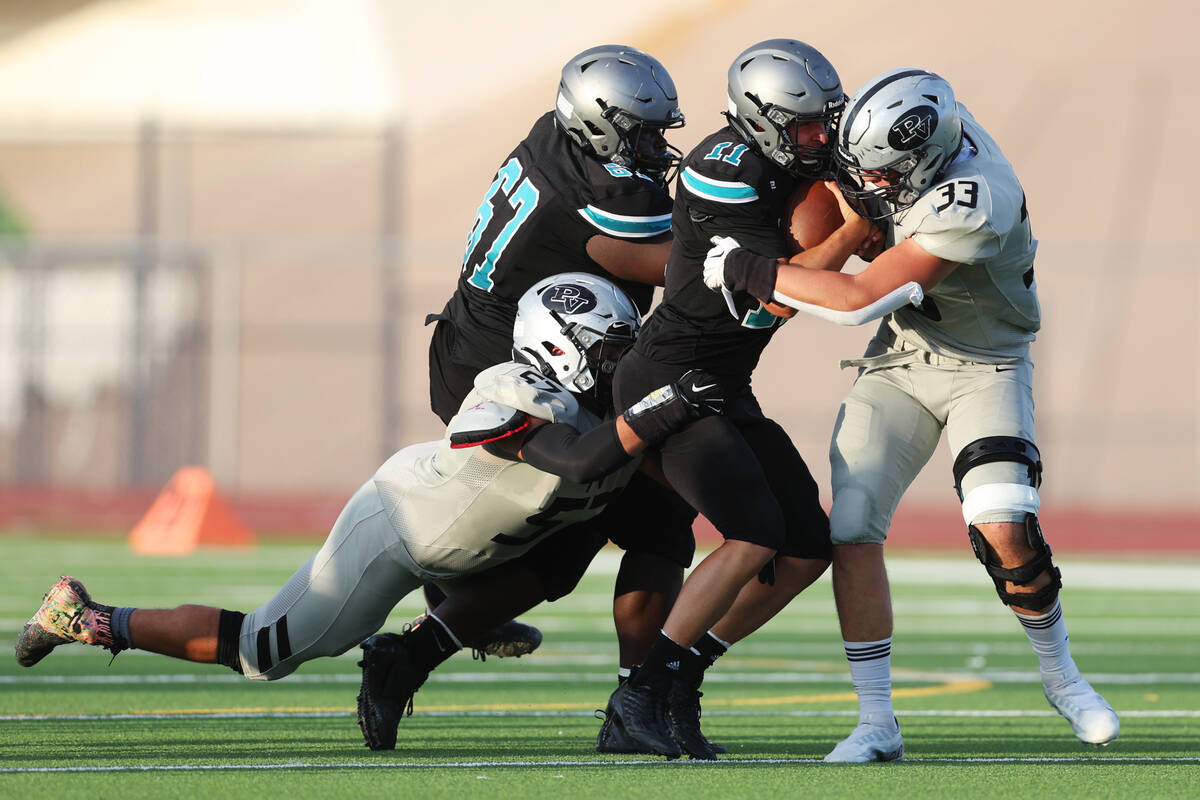 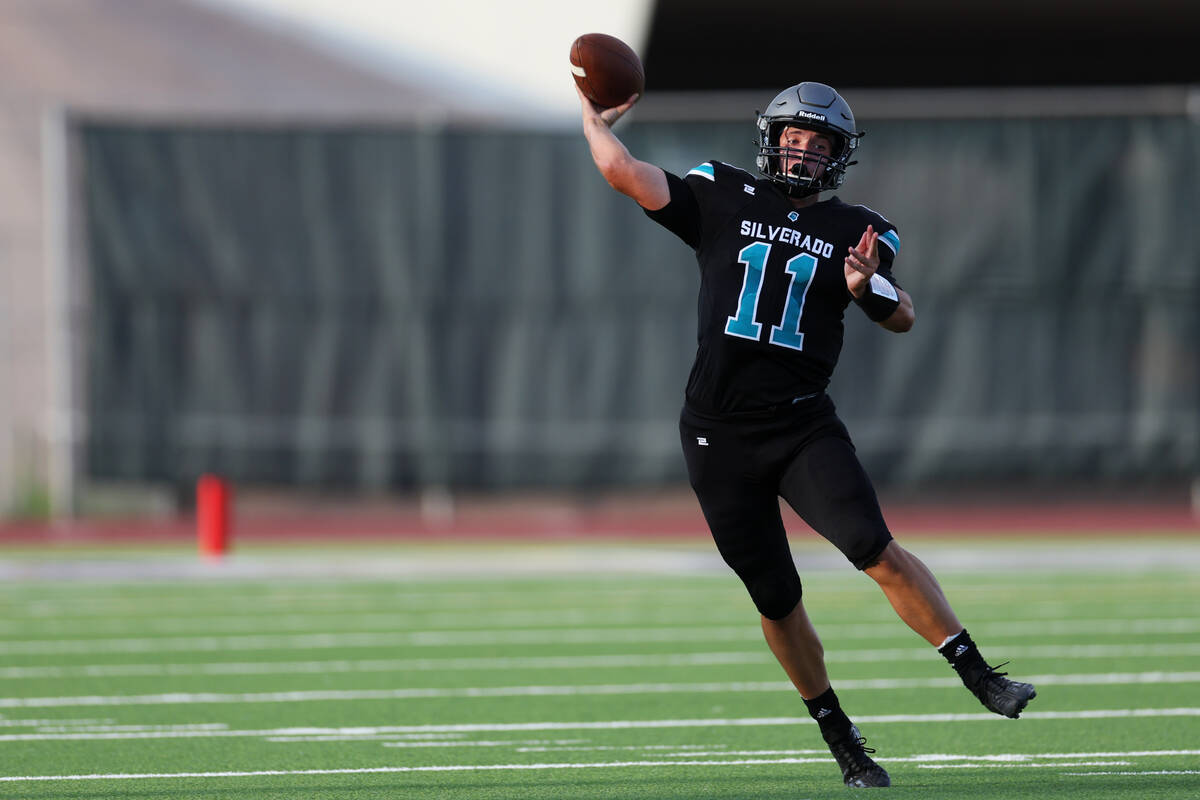 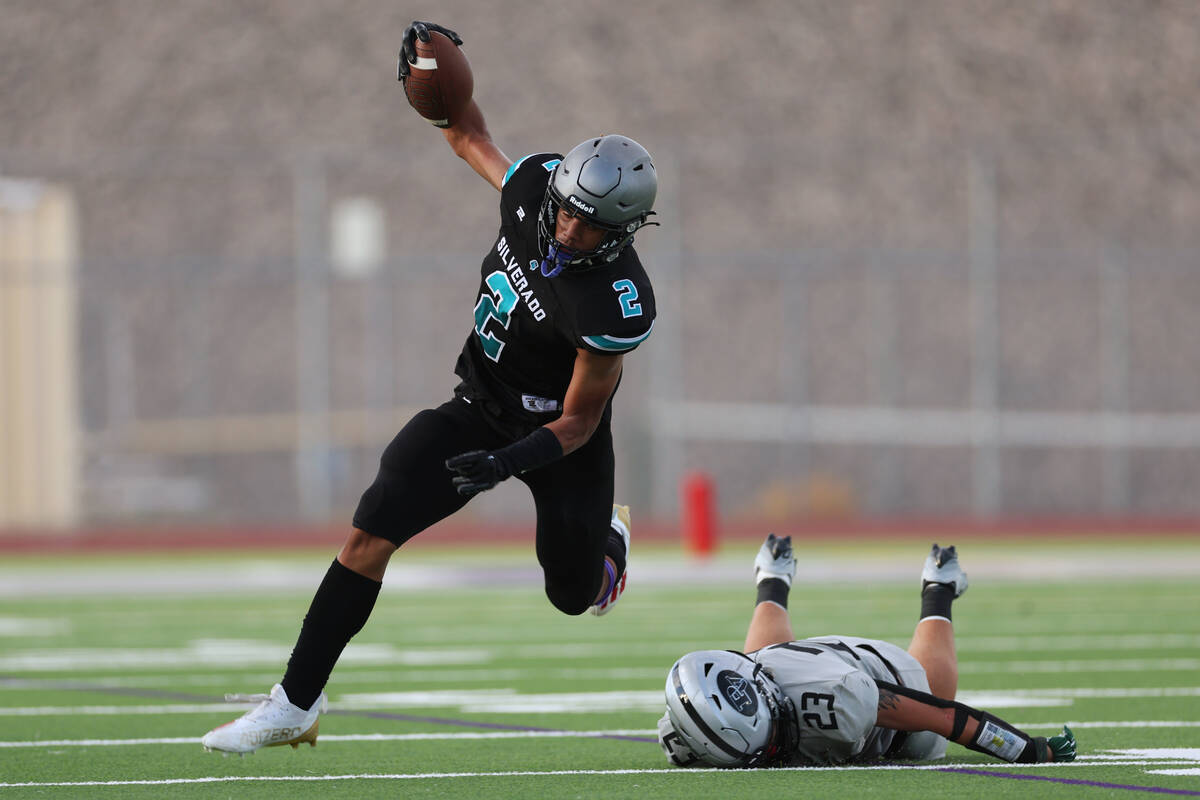 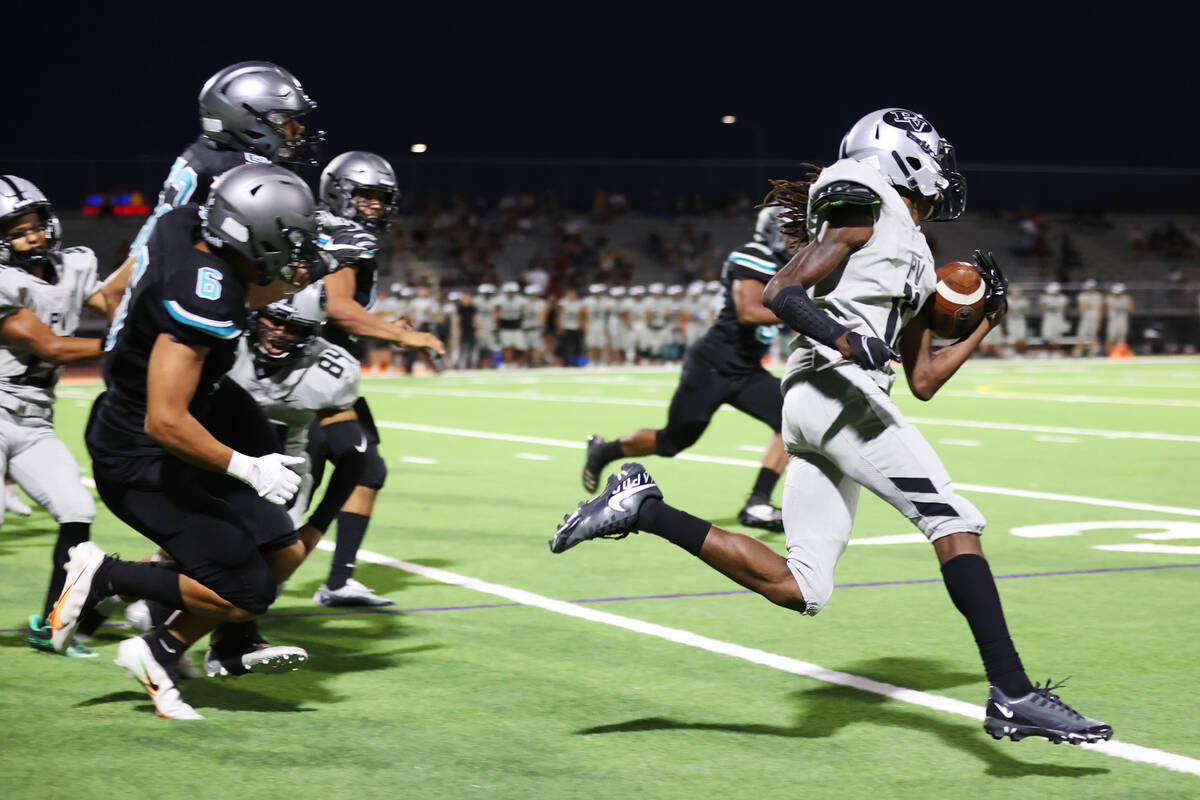 Palo Verde's Has Tucker (11) returns an onside kick for a touchdown against Silverado during the second half of a football game at Silverado High School in Las Vegas, Friday, Sept. 2, 2022. (Erik Verduzco / Las Vegas Review-Journal) 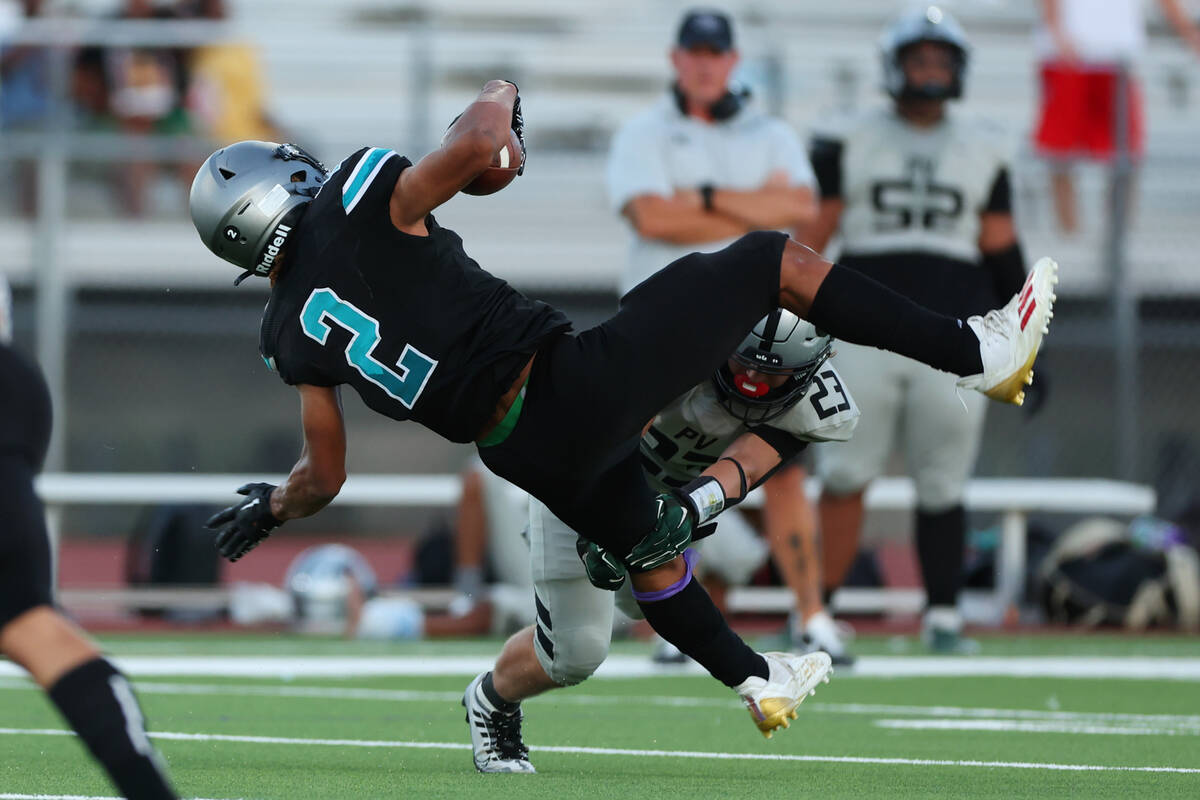 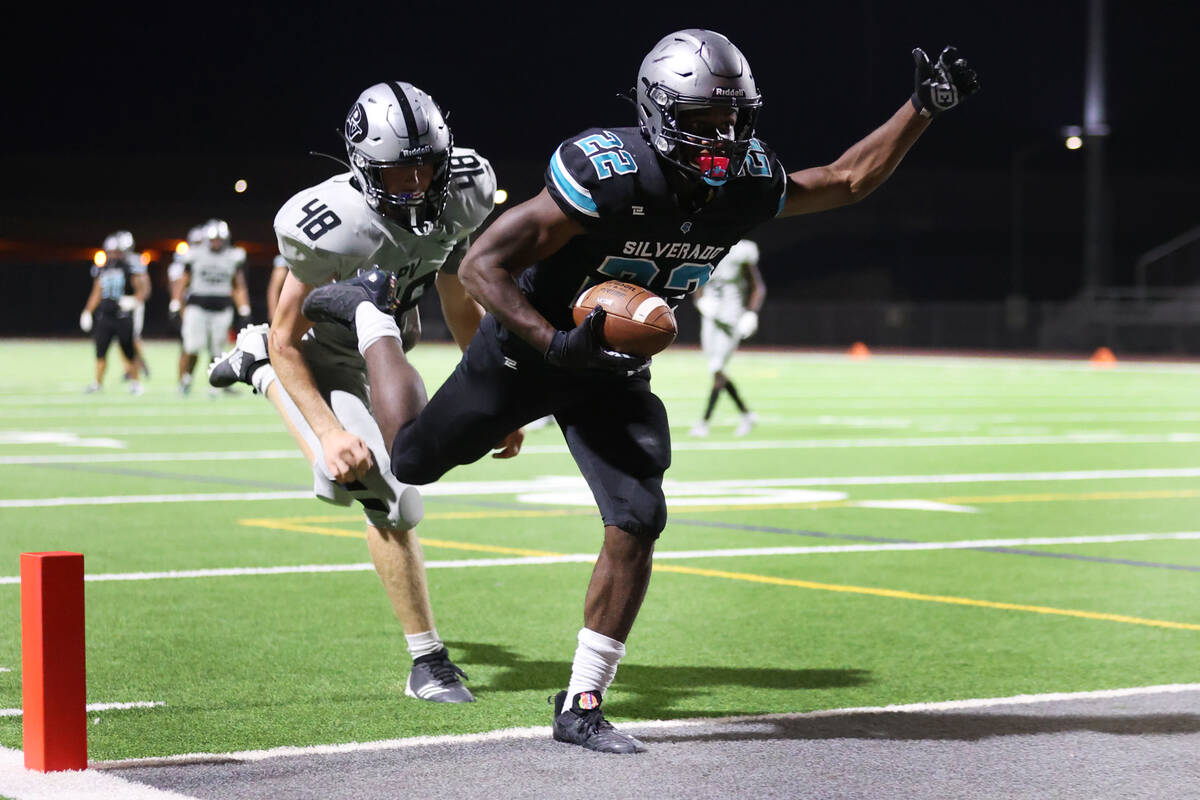 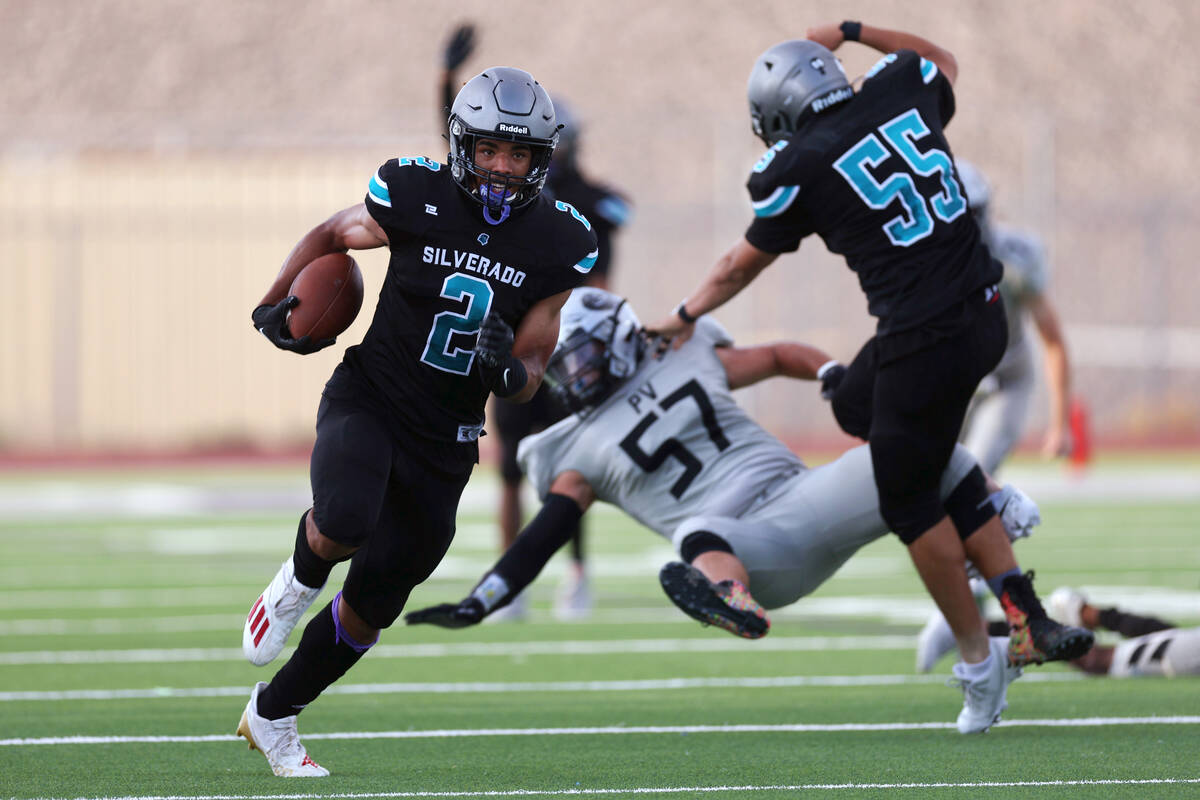 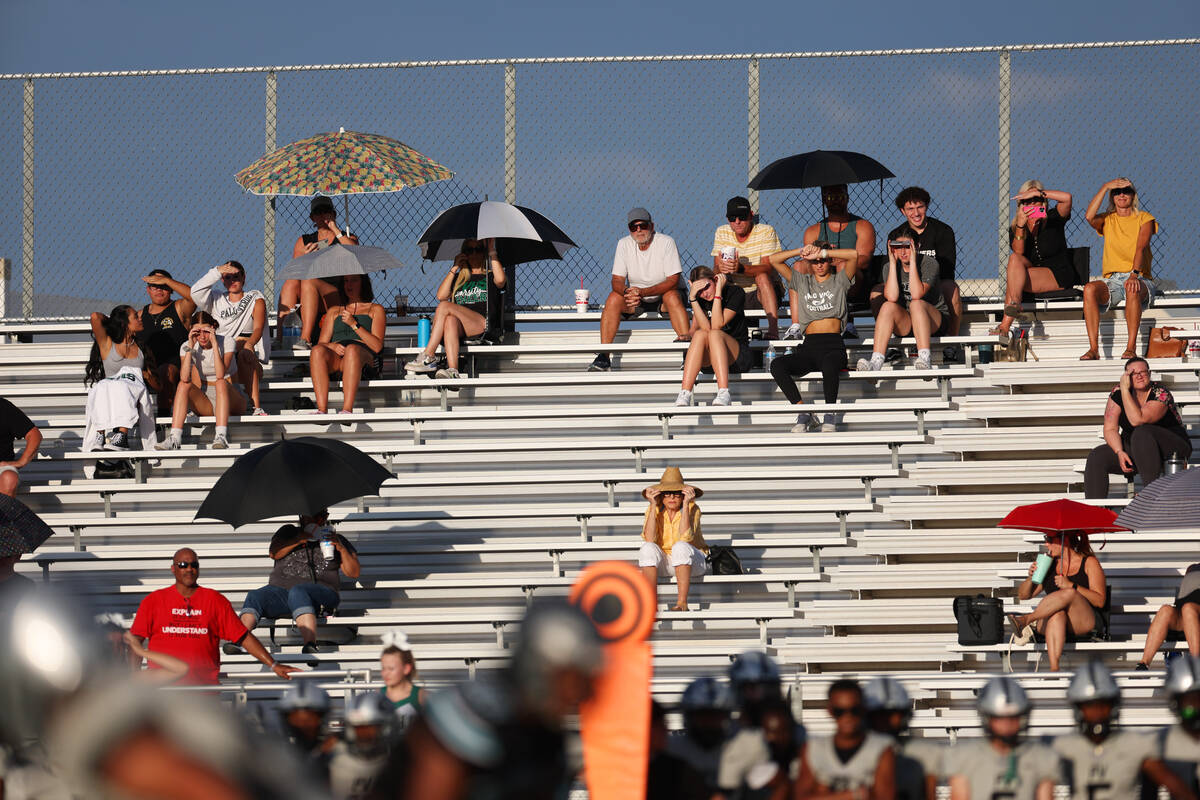 The crows watches the first half of a football game between Silverado and Palo Verde at Silverado High School in Las Vegas, Friday, Sept. 2, 2022. (Erik Verduzco / Las Vegas Review-Journal) 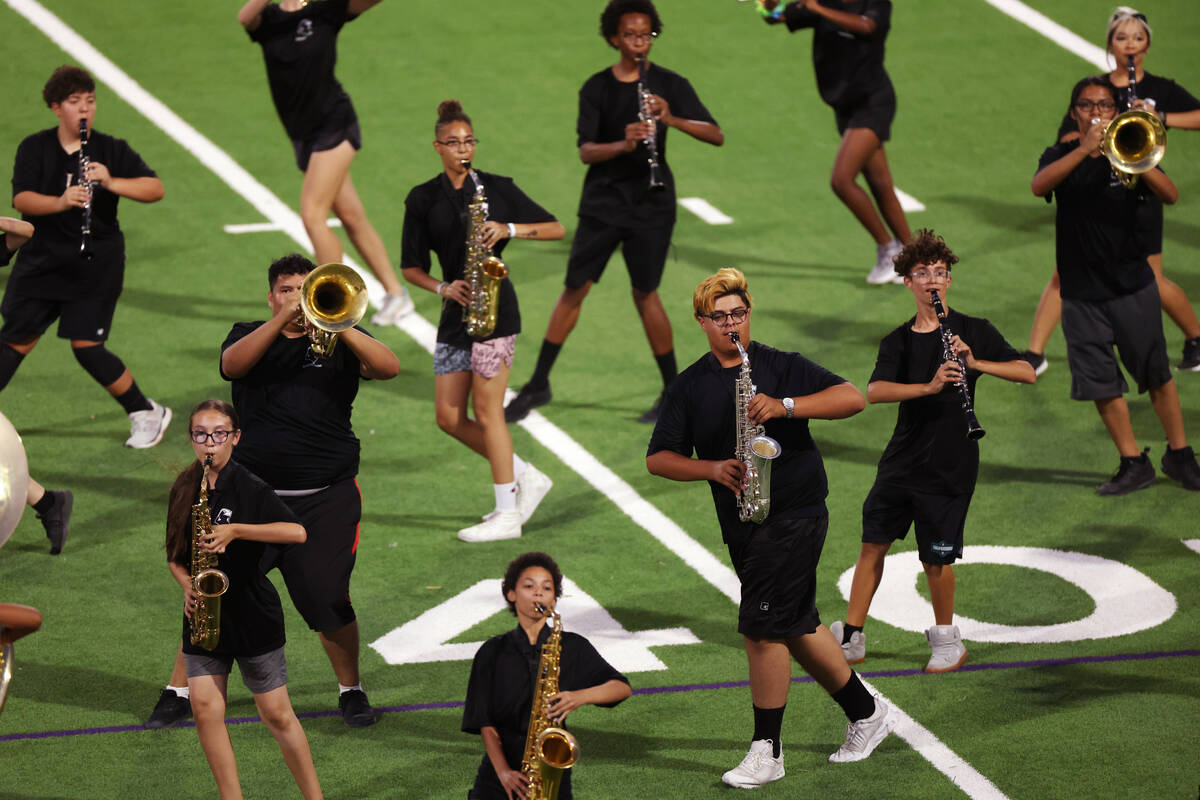 Silverado football coach Andy Ostlaza could have focused on his team’s numerous costly errors after Friday’s game, but the scoreboard was enough to convince him otherwise.

On the positive side, Caden Harris scored three touchdowns, rushed 16 times for 164 yards and caught four passes for 89 to lead the Class 4A top-ranked Skyhawks to a 42-7 home victory over Palo Verde.

“Tonight we kind of sputtered at moments,” said Ostolaza, whose team was coming off a bye. “Things looked great at times, but at others not at all.”

Things started off well enough, as Harris swept right for a 49-yard touchdown sprint on the game’s first play from scrimmage to give Silverado a 7-0 lead.

“Harris had some big plays,” Ostolaza said. “He carried us tonight. So did our defense.”

The Skyhawks (2-0) needed that leadership, as a touchdown was negated on a punt return because of a holding penalty minutes later. It was the first of two negated Silverado touchdowns amid several penalties.

“Early in the season, you’re bound to get some flags, but we still played well enough to score points,” Ostolaza said.

His squad returned to form on its next possession, capping a 16-play, 85-yard drive with a 1-yard touchdown by quarterback Brandon Tunnell to make it 14-0 with 2:08 left in the first quarter.

Tunnell connected with Donavyn Pellot for a 31-yard touchdown late in the second quarter, and it was time for the Panthers (1-2) to commit a costly mistake on the ensuing kickoff. When no Palo Verde receivers elected to catch the kick, the ball was downed by Silverado at the 6-yard line.

Silverado scored two plays later on a 3-yard run up the middle by Pellot, and the Skyhawks had a 27-0 halftime lead.

Though Ostolaza’s defense was stingy throughout, his special teams made some mistakes, including allowing a 90-yard kickoff return for a touchdown by Palo Verde’s Nasir Tucker to open the second half.

But the Skyhawks responded with two 28-yard touchdown passes from Tunnell to Harris in the second half. The second of those scores put Silverado ahead 42-7 and started the running clock.