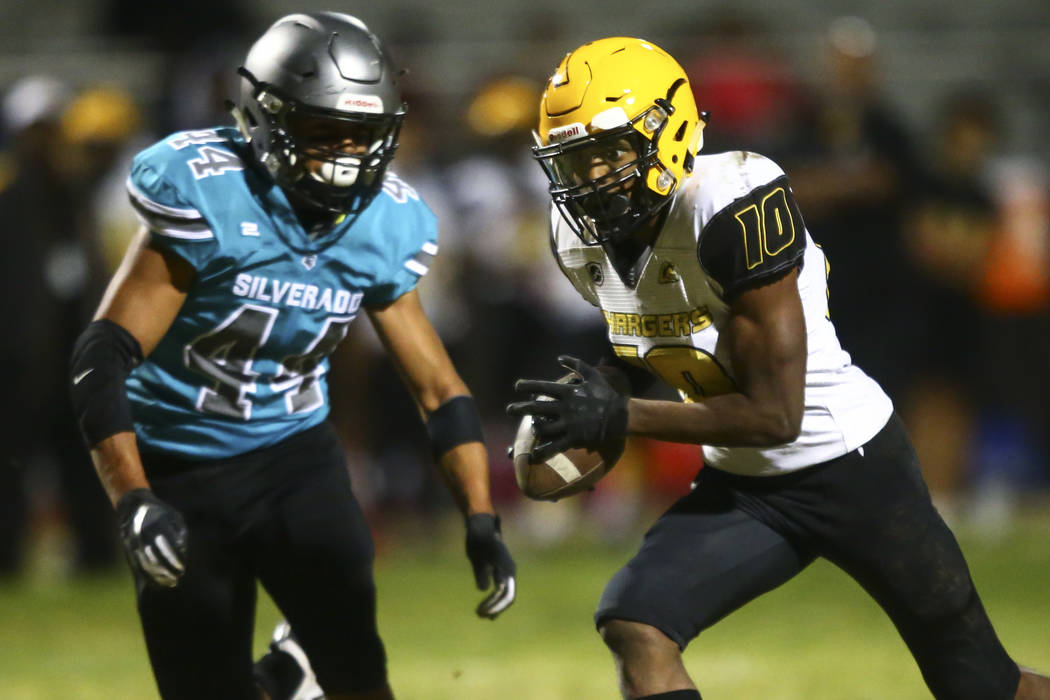 Clark's Dillan Lavender (10) runs the ball against Silverado's Chris Federico (44) during the first half of a football game at Silverado High School in Las Vegas on Friday, Oct. 18, 2019. (Chase Stevens/Las Vegas Review-Journal) @csstevensphoto

There might not be a bigger Clark fan in the valley than Michael Ovens this week.

What’s strange is that Ovens is the coach at Desert Oasis, the team Clark defeated last week on a last-second touchdown pass.

That’s how it goes when a team’s playoff hopes are hanging by a thread in the last week of the season. Teams will cheer for others they viewed as the enemy as recently as a week ago, and the Diamondbacks’ loss to Clark left them in the highly unenviable position of needing to win and get some help to reach the postseason.

It gets worse for Desert Oasis. It has enough of a task on its hands to try to defeat a Silverado team that has wrapped up second place in the Southwest League. But the fact that the help it needs is from Clark doesn’t leave the Diamondbacks with much hope, since Clark would have to do something no team in the state has done in more than a decade — beat Bishop Gorman.

“We have a tough game, and we can only control what we can control,” Ovens said. ‘Silverado is big, fast and physical, and they’ve had a heck of a season. I’ve already voted for Andy (Ostolaza) as coach of the year in our league. It’s going to be a good old-fashioned battle, and I hope we end well.”

Gorman has clinched the Southwest League’s No. 1 seed, Silverado is No. 2. Clark locked up a postseason berth with its thrilling win over Desert Oasis. That leaves Desert Oasis and Durango as the two teams vying for the last playoff spot.

That throws another wrench into the situation, since the Desert Oasis-Durango game was deemed a double forfeit after what was determined by the Nevada Interscholastic Activities Association to be a bench-clearing brawl in a game that was tied at 7 in the second quarter.

“Not to beat a dead horse at this point, but that double forfeit really hurt us,” Ovens said of his Desert Oasis team. “It hurt both teams, but I think it really hurt us.”

Durango nearly damaged its chances last week, but it scored a late touchdown to edge winless Sierra Vista 15-14. That was the final regular-season game for the Trailblazers, who can only wait to learn their fate.

Durango coach Toby Henry said his team isn’t sitting around this week. Practices are lighter than normal, but the Trailblazers know realistically it would take a near-miracle to keep them out of the playoffs. They’re likely to be the No. 3 seed from the Southwest, so they’re preparing for a meeting with Green Valley, the Southeast League’s No. 2 seed. Durango dropped a 39-3 decision to Green Valley on Aug. 30 as part of an 0-3 start.

“We started off slow,” Henry said. “We had a tough schedule, and we’re a young team. But we got a lot better as the season went on. It looks like we’ll get another shot at Green Valley.”

Green Valley clinched the No. 2 seed by virtue of its 24-23 win over Foothill last week in double overtime. Liberty is No. 1, and Foothill, Coronado and Chaparral are all still alive for playoff positions. The situation will be resolved based on what happens when Foothill travels to meet Chaparral.

“We’re in good spirits. We know we let one get away from us last week, but we’ve had a much better week of practice,” Foothill coach Vernon Brown said. “I think the kids know what’s at stake, and we just want to win the game.”

Foothill is in the strongest position of the three, with Chaparral in the weakest. With the way the tiebreaker system is set up, Chaparral needs to not only beat Foothill, it needs to win by 13 or more points and allow Foothill to score 12 points or less. If Chaparral can’t accomplish that, Foothill will be No. 3 and Coronado will take the fourth and final spot.

Chaparral coach Don Willis knows it’s a daunting task, but his team is excited to have any hope at all.

“When we lost the other night, we thought that chance had gone away,” Willis said of the 40-21 loss to Coronado. “(Our situation) does add urgency, but we know we have to go out and play mistake-free. We haven’t really done that this year, but we know we’re capable of going out and getting the job done.”