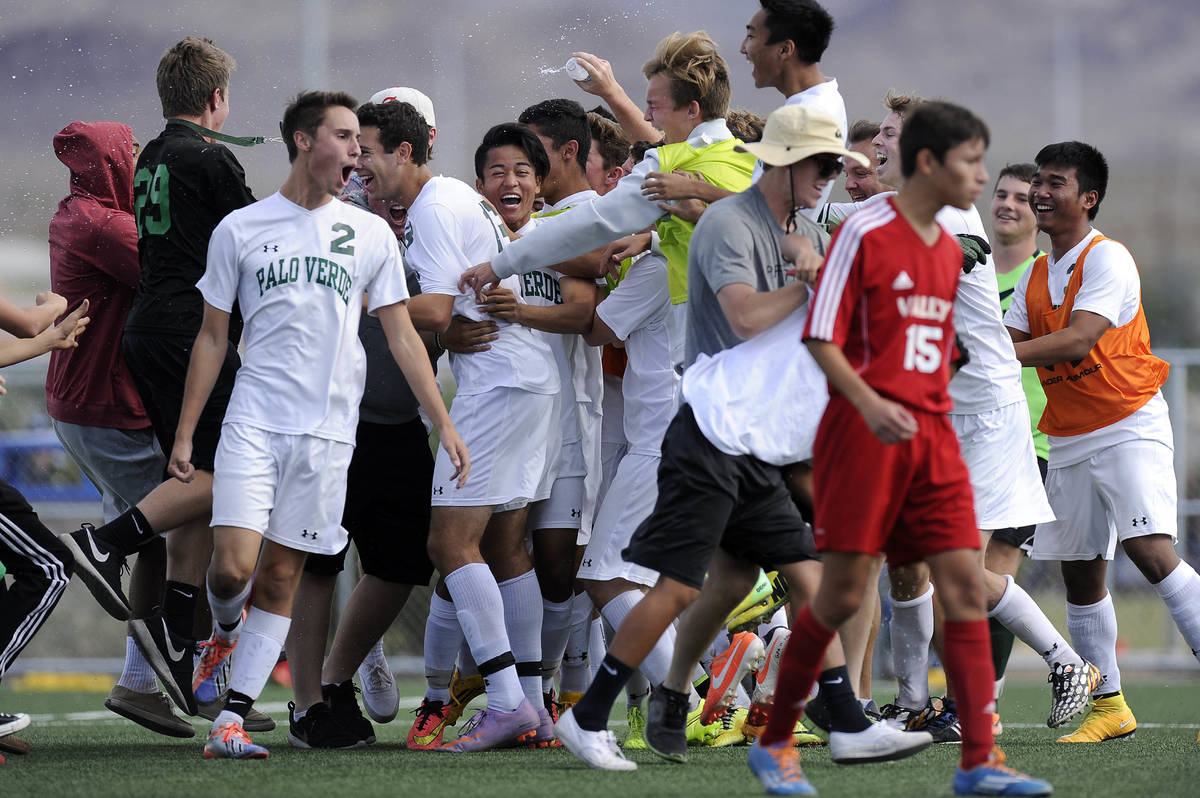 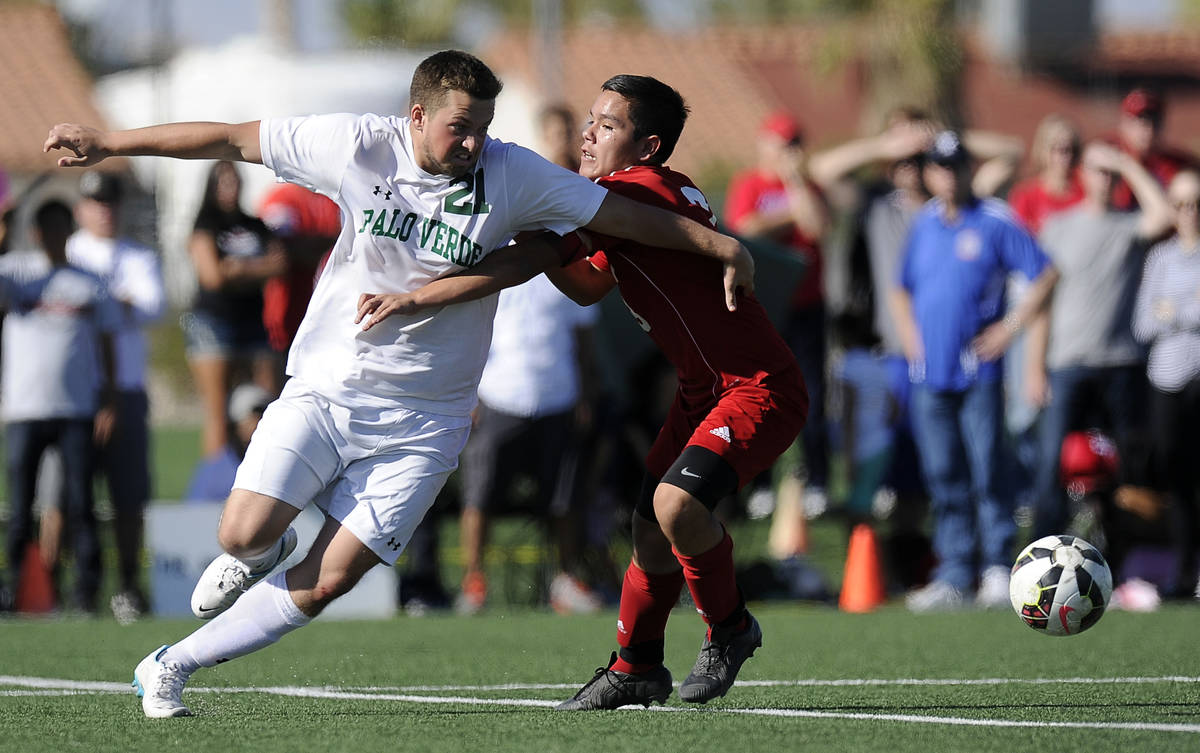 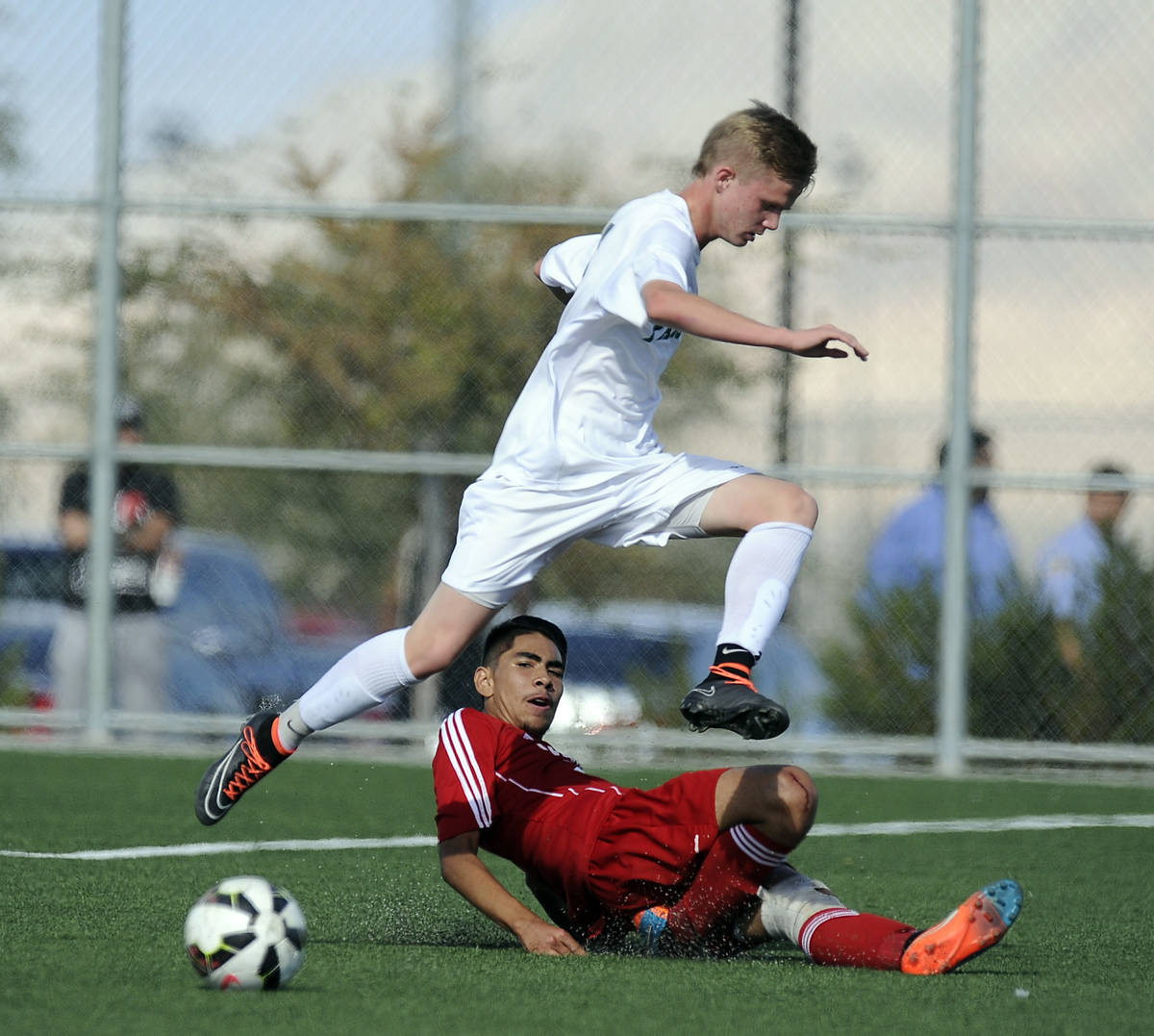 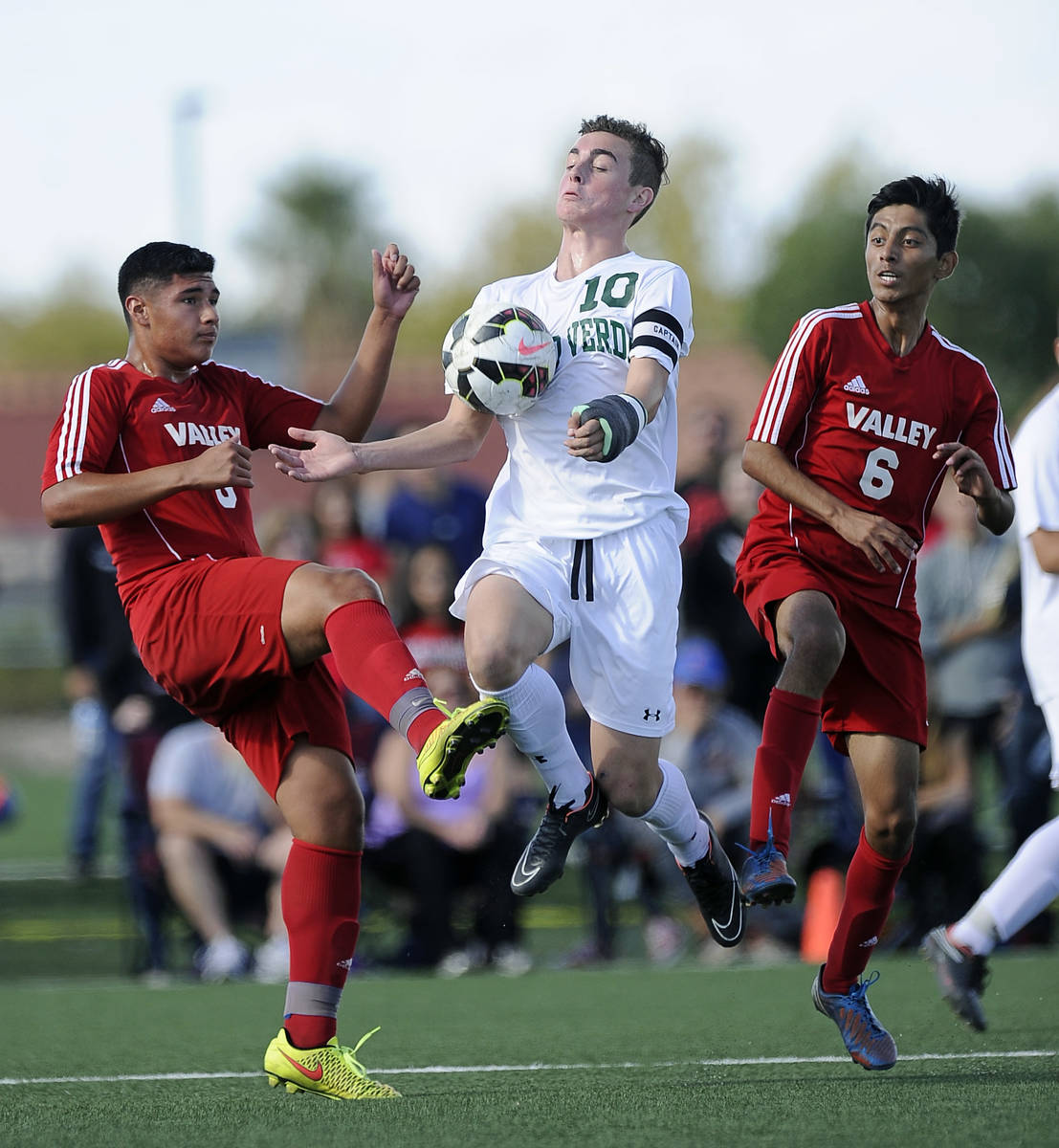 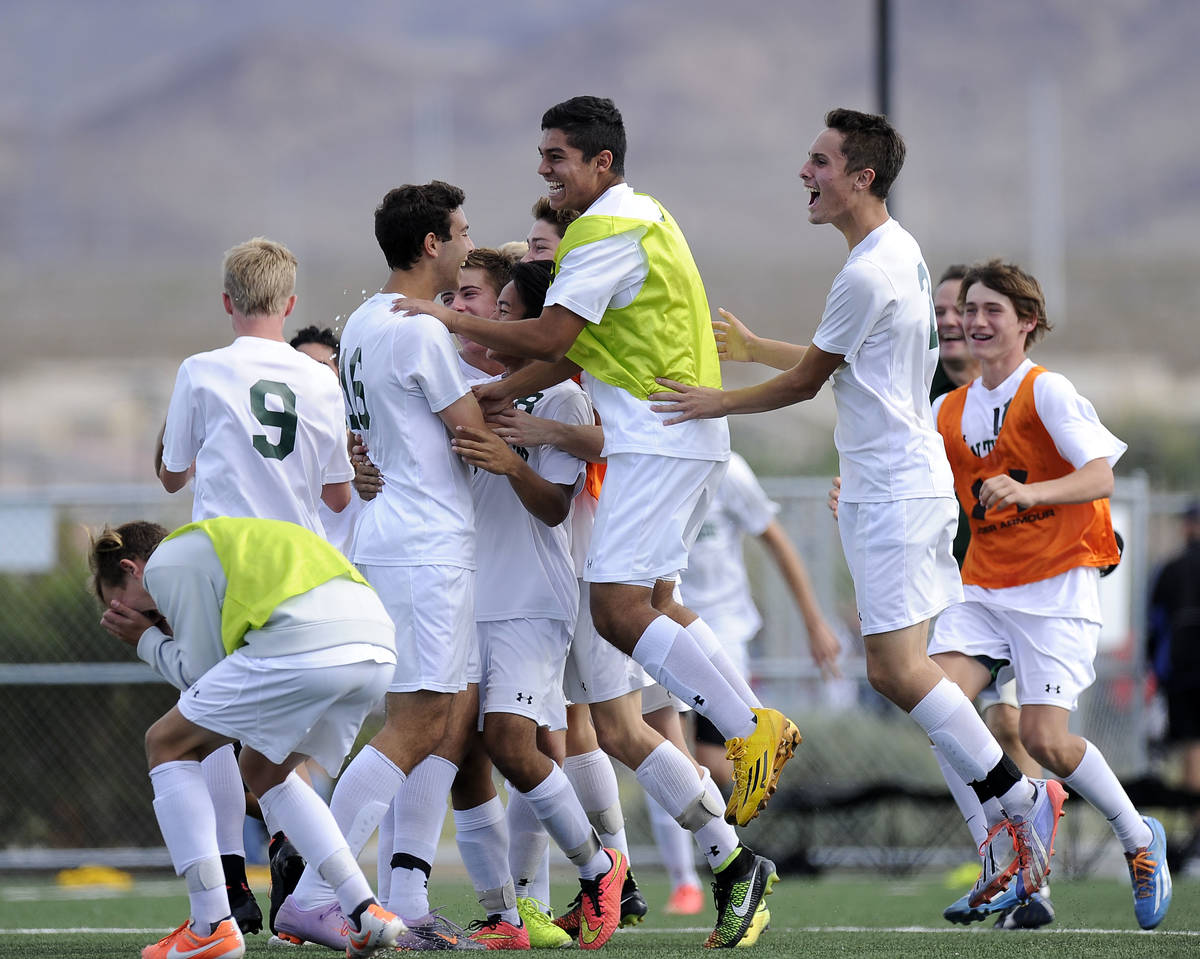 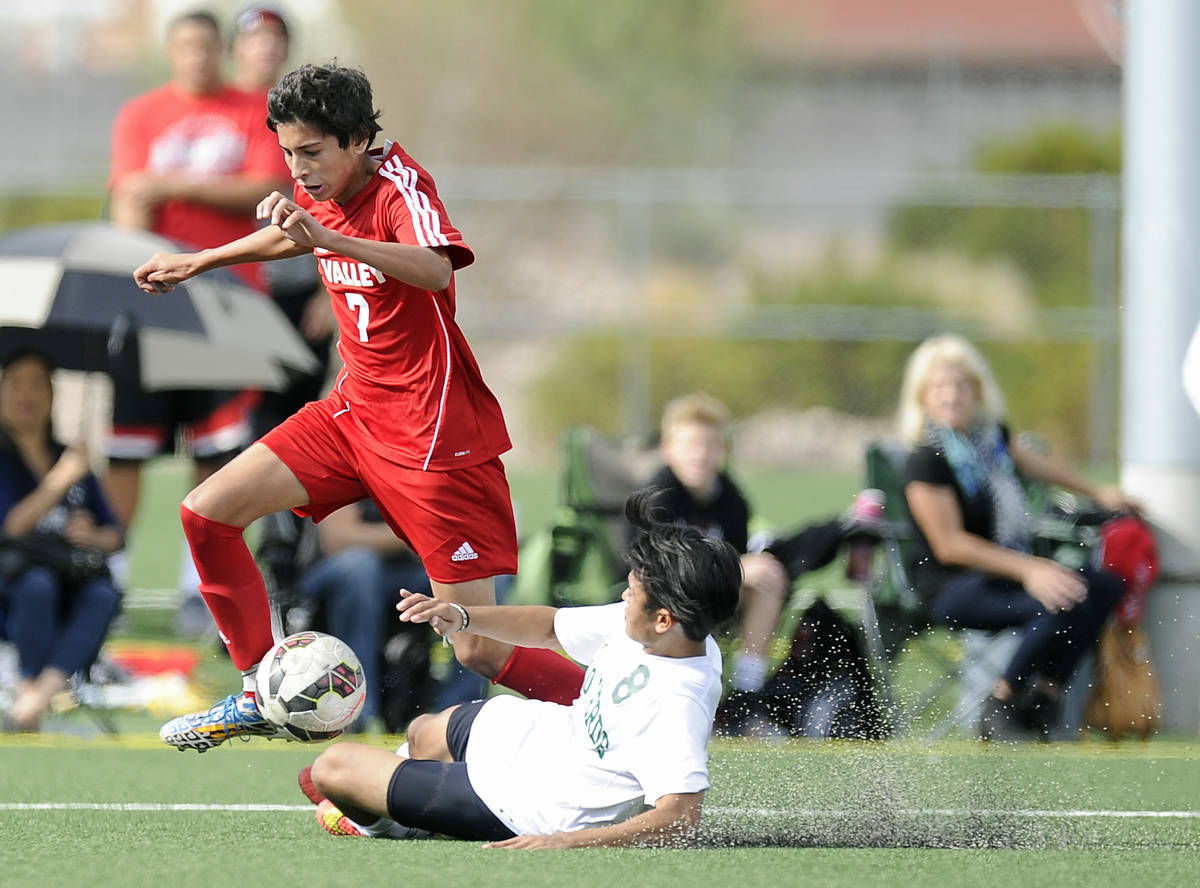 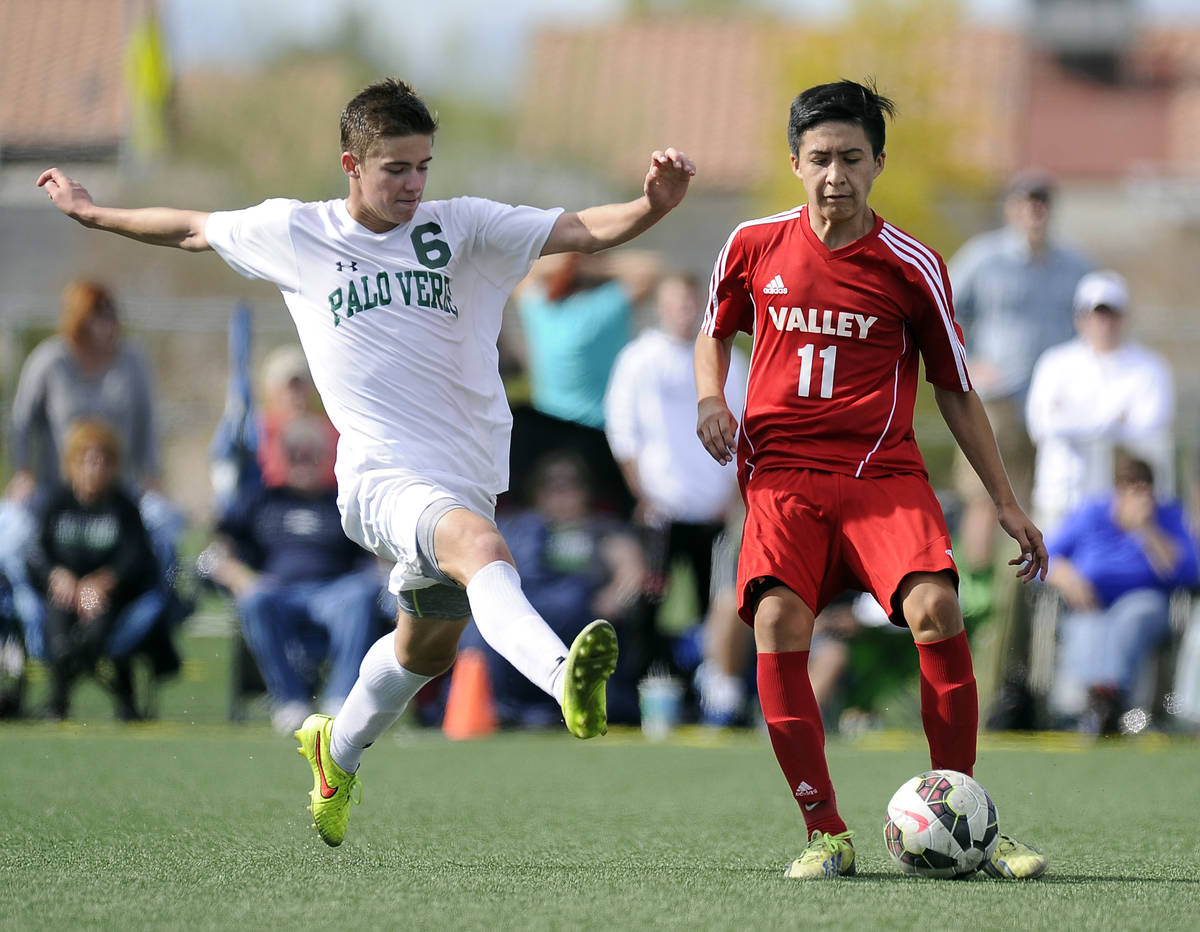 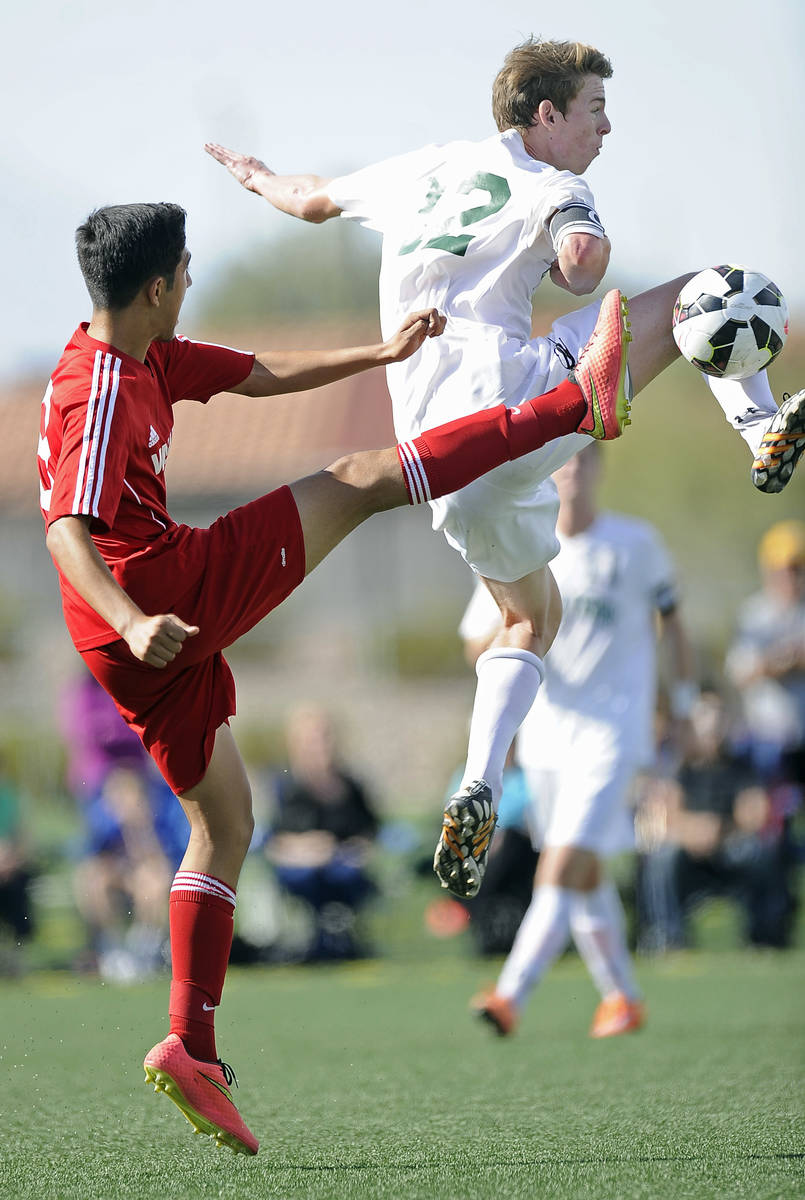 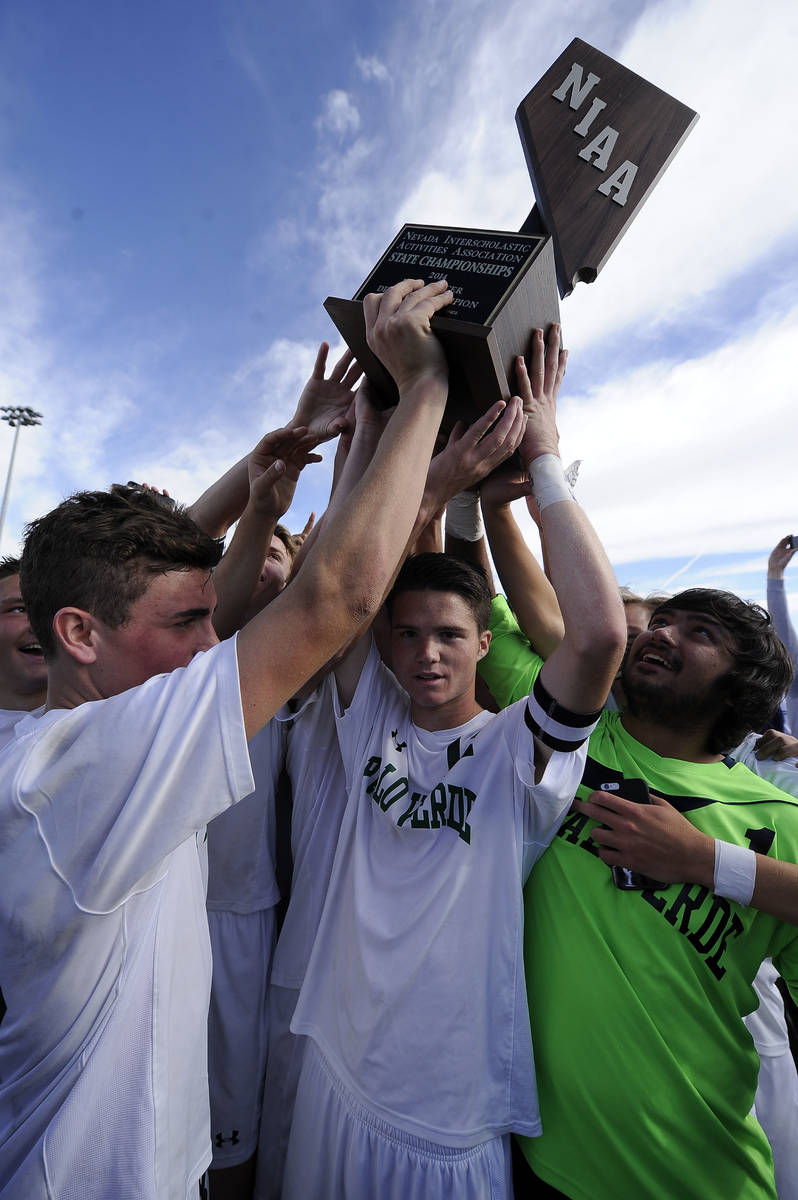 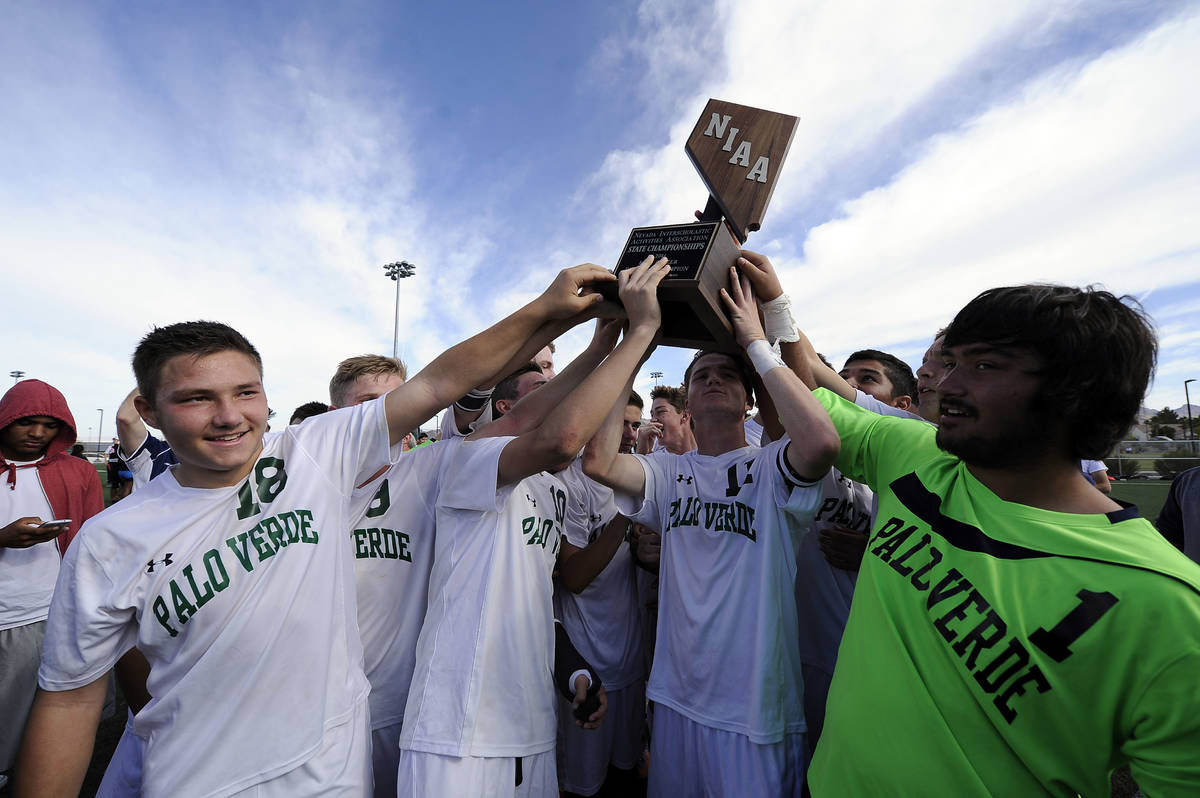 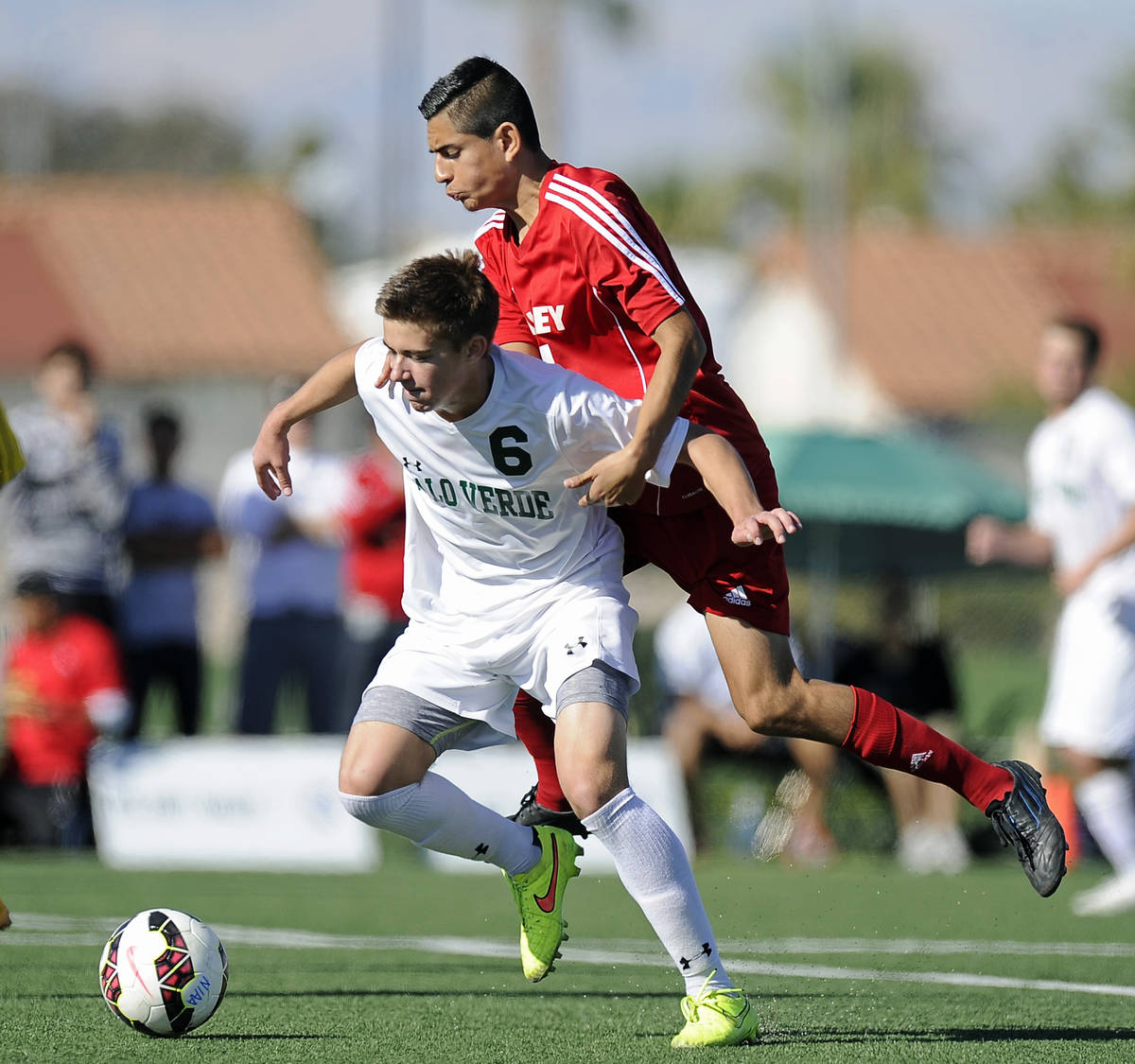 Fourth in a series: Here are the top five high school state boys soccer championship games from the 2000s, as selected by the Review-Journal staff. Friday: softball.

Erik Karnehed scored a goal in the 56th minute that lifted the Panthers to the program’s first state championship.

Karnehed, an exchange student from Sweden, was trying to get the attention of his team’s bench to come out of the game for a rest, but his pleas went unanswered.

“My legs were tired, and I needed a break for five minutes,” Karnehed said. “When we got the throw-in, I said, ‘Now I’m going to score the final goal.’”

Austin Manthey had a goal and an assist for the Panthers, who dropped a 2-0 decision to Eldorado in the 2013 final.

The Vikings scored on a shot from the top of the 18-yard box that found the lower-left corner of the goal in the 19th minute. Manthey tied the score eight minutes later by putting in a cross from Dylan Obata.

In a game that was largely played in the midfield, Cole Malm scored in the 80th minute to give the Gaels their sixth state title and first since 2012.

“I’ve coached a lot of these guys in club, so I know their capability,” Gorman coach Tommy Tate said. “To go 26-0-1 in a very tough high school league with teams like Coronado and Green Valley, among others, I didn’t think we could go undefeated, but I did think we could win the state championship.”

Tate said the field was bumpy and narrow, and that made it difficult for either team to sustain any kind of offensive attack.

As a result, the game stayed scoreless until the final minute. That’s when Caden Buckley won possession in the midfield. He got the ball to Malm, who beat the right back and scored “on a tough angle.”

Gorman, ranked 12th in the USA Today Super 25 national poll, tied Arbor View for its only blemish, and it had played only one other one-goal game since then.

Nick Eary scored with 17 minutes remaining in the second half, and the Gaels claimed their second straight state championship.

The victory was dedicated to the memory of Victor Arbelaez, a soccer coach at Gorman for two decades who died in October of that season. Nick Arbelaez coached the Gaels to both championships after taking over for his father.

“This is such an amazing feeling right now,” Arbelaez said. “Every accolade I get, everything I accomplish is in honor of my father.”

Eary beat Douglas goalkeeper Jose Alcaraz from about 10 yards out in front of the net for the only goal.

Eary also scored the winning goal in the Gaels’ 3-2 victory over Silverado in the 2006 championship game.

The Roadrunners overcame a first-half red card that forced them to play a man down the rest of the way by scoring two late goals to cap an undefeated season and claim their first state championship.

“We’ve been striving for this, and it’s been a long time coming,” Tech coach Josh Jones said.

Tech, which finished 23-0, took a 2-1 lead on Rafael Munoz’s goal with 12 minutes left, and Julio Vargas added a penalty kick to make the score 3-1 with four minutes remaining.

Sparks added a Kevin Partida goal two minutes later, and the Railroaders had several chances to tie the score in seven minutes of extra time.

Tech scored first on a Hugo Flores goal, but Partida tied it on a penalty kick after the penalty that forced the Roadrunners to play short-handed.

Las Vegas goalkeeper Roger Zaragoza made a diving save on Kiril Boev’s shot in the third round of penalty kicks, and that was the difference in the Wildcats’ second straight state championship.

“Back to back, it feels great,” Zaragoza said.

The Gaels appeared to win the game in the first overtime, but a header that found the goal was negated because of an offsides call.

Gorman took a 1-0 lead on a Zaragoza mistake, when Connor Zanoni’s 55-yard free kick bounced away from him and into the goal in the 32nd minute. The Wildcats answered with an Ivan Chamorro header in the 75th minute to force the game into overtime.

“I felt we had so many chances, but these boys deserved that goal,” Las Vegas coach Vince Hart said.