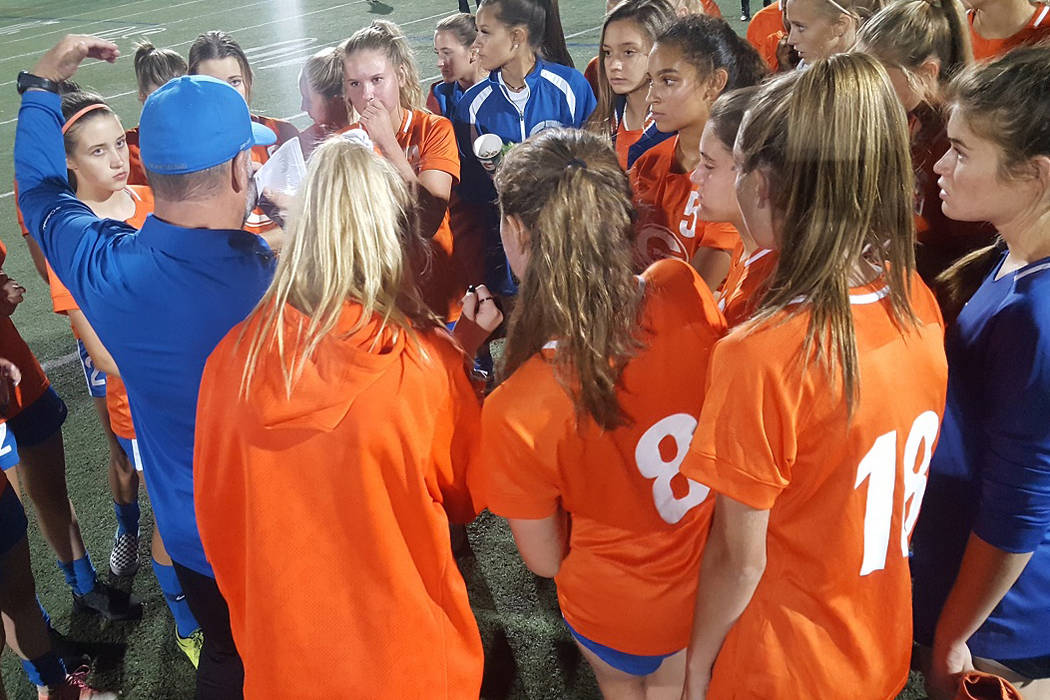 Bishop Gorman coach Doug Borgel addresses his team after its 7-0 senior-night win over Coronado on Wednesday. The Gaels finished the regular season 22-0-0 and ranked seventh in the nation by USA Today. W.G. Ramirez/Las Vegas Review-Journal 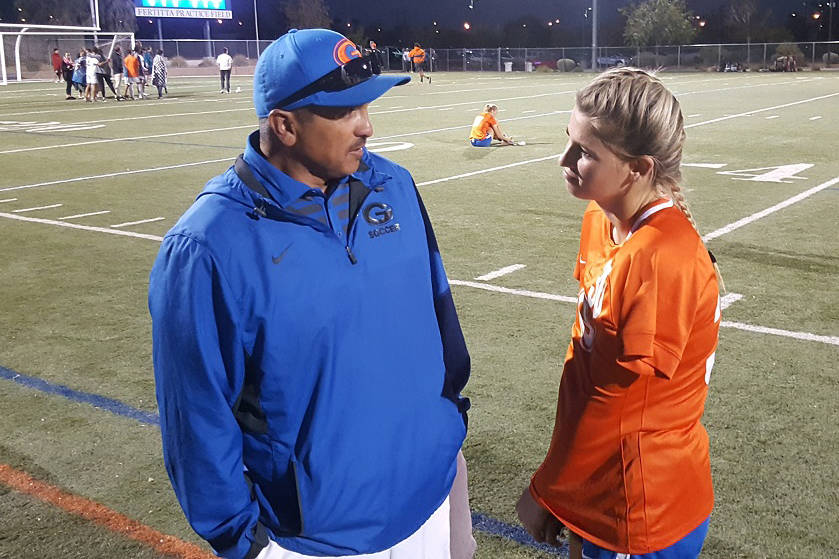 In the midst of the Gaels’ 7-0 win over Coronado on Tuesday, she got to see her best friend score a goal.

It was senior Kate Swanis’ first goal of the season. The North Dakota State-commit was one of five seniors who accounted for the Gaels’ seven goals on Senior Night.

“It was great, being through the journey, through the three years for me, it’s been great to see all these girls grow and come together as a family and I’m just very proud,” said Gourley, who scored her 23rd and 24th goals of the season in the win. “I’m proud of Kate, she’s my best friend. Just very proud of everyone.”

Taylor Cox had two goals and a pair of assists, Kevyn Hillegas blasted a 40-yard dart to the back of the net and Vanderbilt-bound Ashtyn Fink closed out the scoring with her team-leading 28th goal of the season.

“The support that we’ve had by not only teammates, but by everybody has been unbelievable,” Cox said. “That just totally changes the atmosphere. You’re not only playing for yourself, but you’re playing for everybody who’s there to support you.”

And as warm and fuzzy as that all sounds, this is the still the seventh-best high school girls’ soccer team in the nation, according to USA Today, and both coach Doug Borgel and his players are loaded with confidence heading into the postseason.

“I’d be kidding you if I said I thought it’d be this easy,” Borgel said of his team’s dominating win over the Cougars. “We know who we are but we feel like we can do this to anybody when we’re playing our best. For us to finish like this, it’s not surprising. The score may be a little bit, but the domination part of it, when we play our game I feel that we can’t be beat.”

Which, they haven’t. The defending state champions are 22-0 and head into the postseason having outscored their last six opponents 36-1. Their three goalies — Maris Findlay, Kirsten Kircher and Brianna Paez — have combined for 14 shutouts, including Kircher’s fifth of the season on Wednesday.

“And when you have a two-week break coming up like this, very important to keep everything positive, finish on a good note so that when we get to the playoffs we’re going in rolling feeling good about ourselves,” Borgel said. “Even when we’re not the best, everybody loves to come in and beat Gorman. We put a lot of hard work and take a lot of pride in being the best. And this year we’ve proven it. We have played everybody we could to this point. The Palos, the Coronados, the Green Valleys — everybody we could play at this point — and taken each one of them down.”