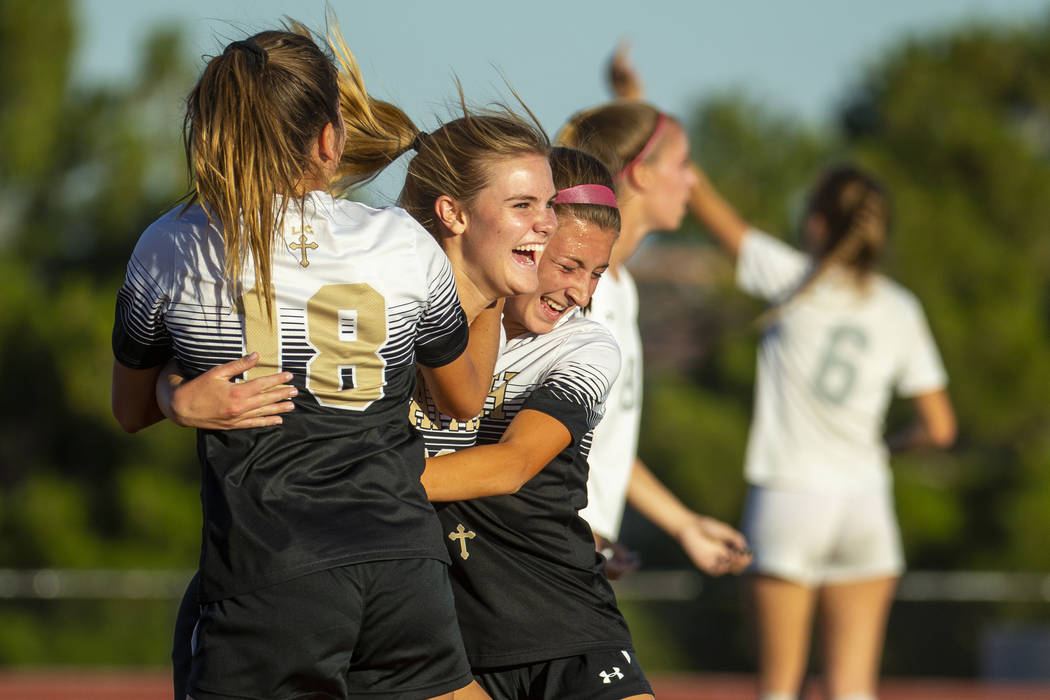 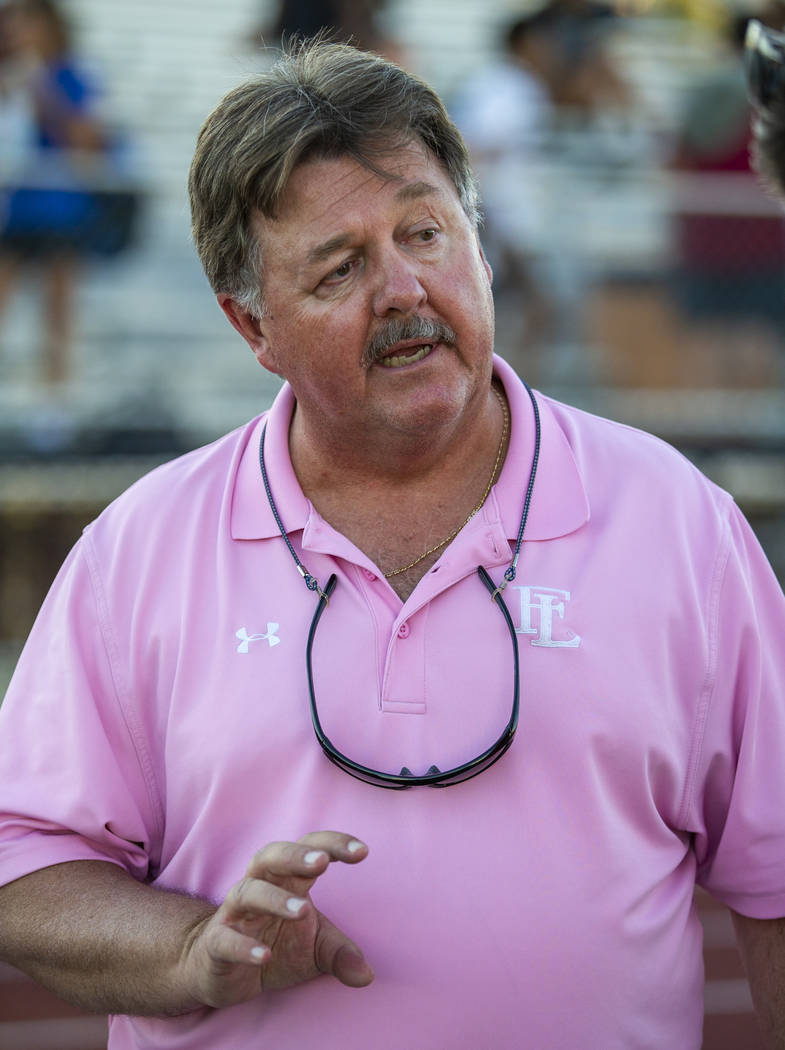 Faith Lutheran's head coach Bob Chinn on the sideline versus Arbor View during the second half of their soccer game on Monday, Oct. 7, 2019 in Las Vegas. (L.E. Baskow/Las Vegas Review-Journal) @Left_Eye_Images 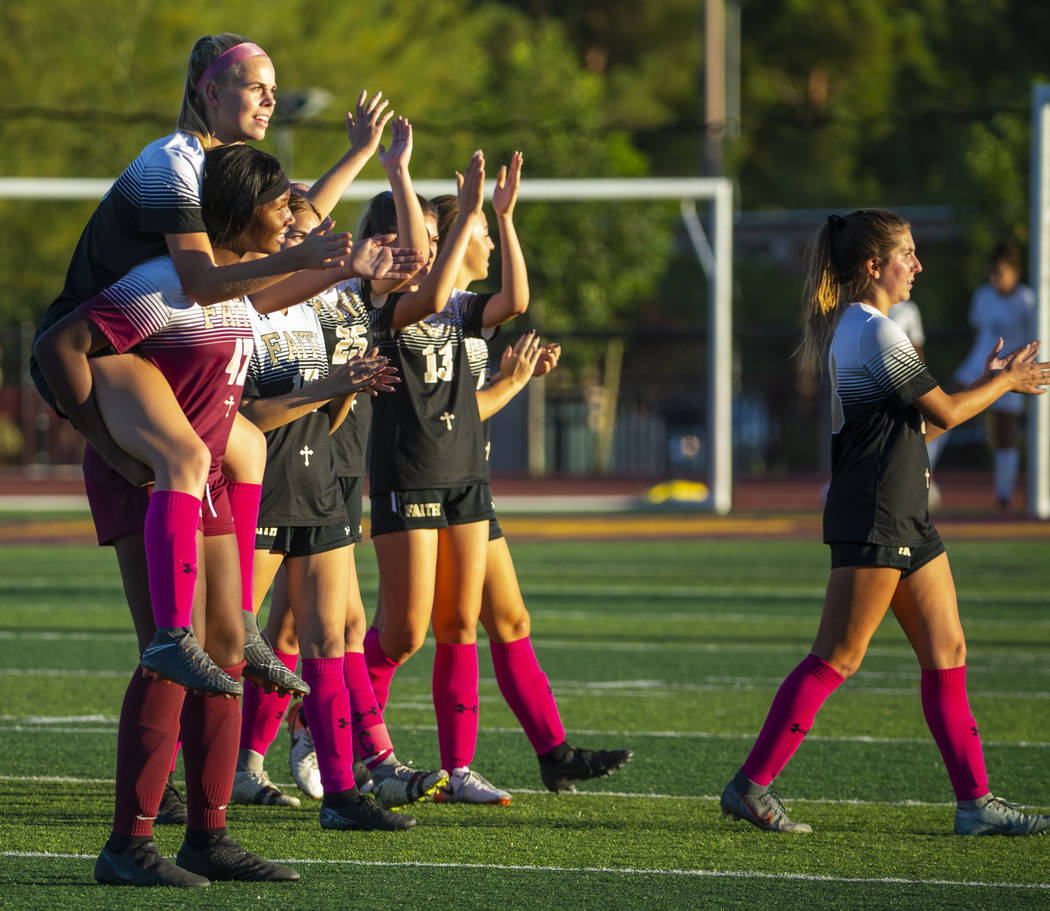 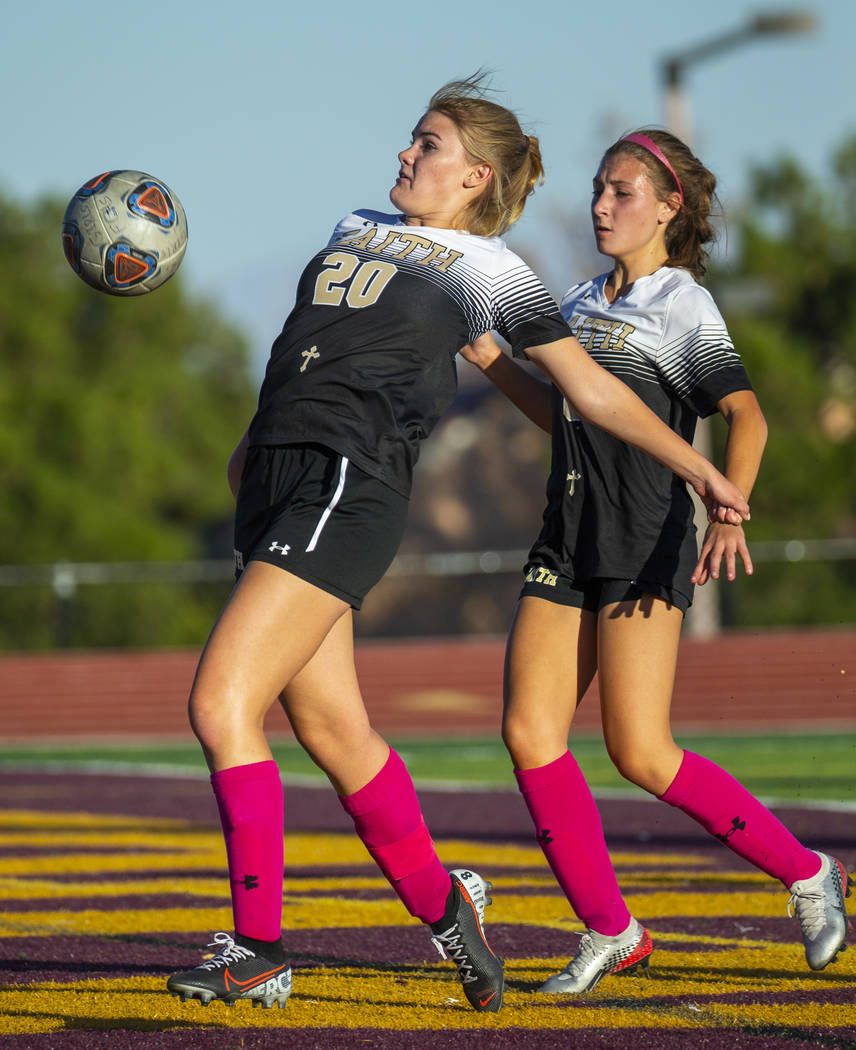 Faith Lutheran's Amelia McManus (20, left) bounces the ball off her midsection and into the Arbor View goal during the second half of their soccer game on Monday, Oct. 7, 2019 in Las Vegas. (L.E. Baskow/Las Vegas Review-Journal) @Left_Eye_Images 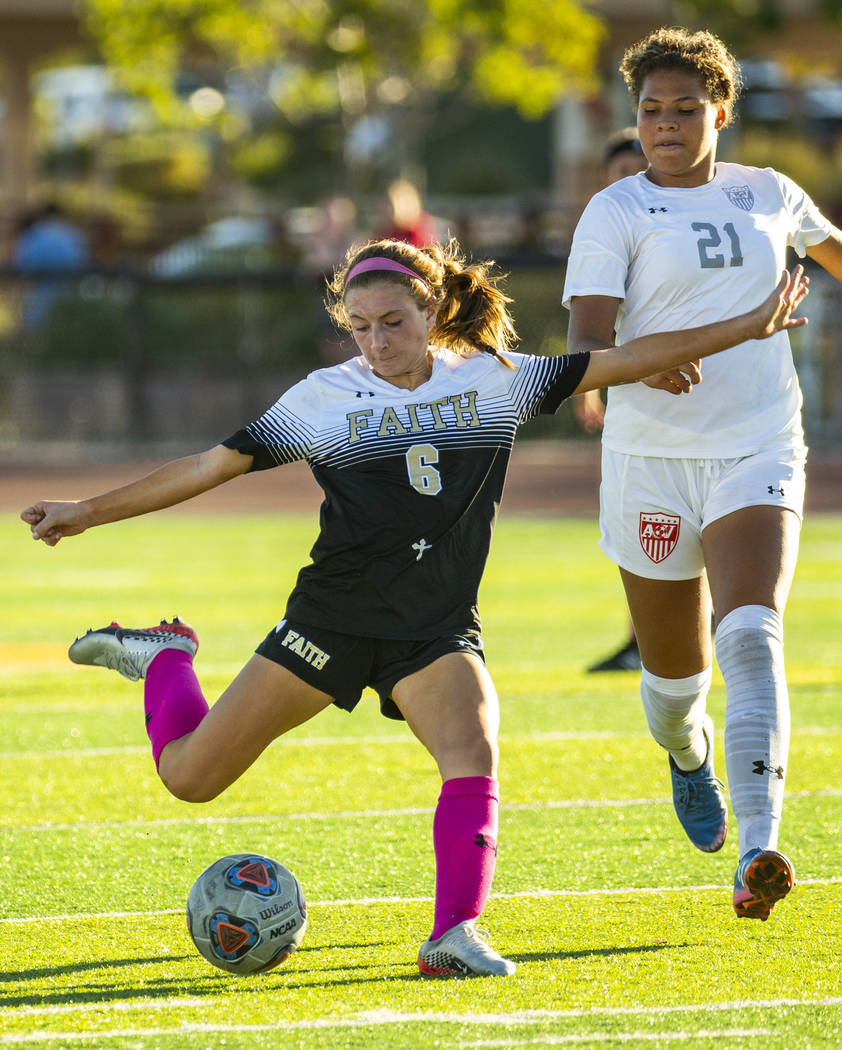 Faith Lutheran's Camille Longabardi (6, left) winds up on the ball as Arbor View's Tiana Beavers moves in during the second half of their soccer game on Monday, Oct. 7, 2019 in Las Vegas. (L.E. Baskow/Las Vegas Review-Journal) @Left_Eye_Images 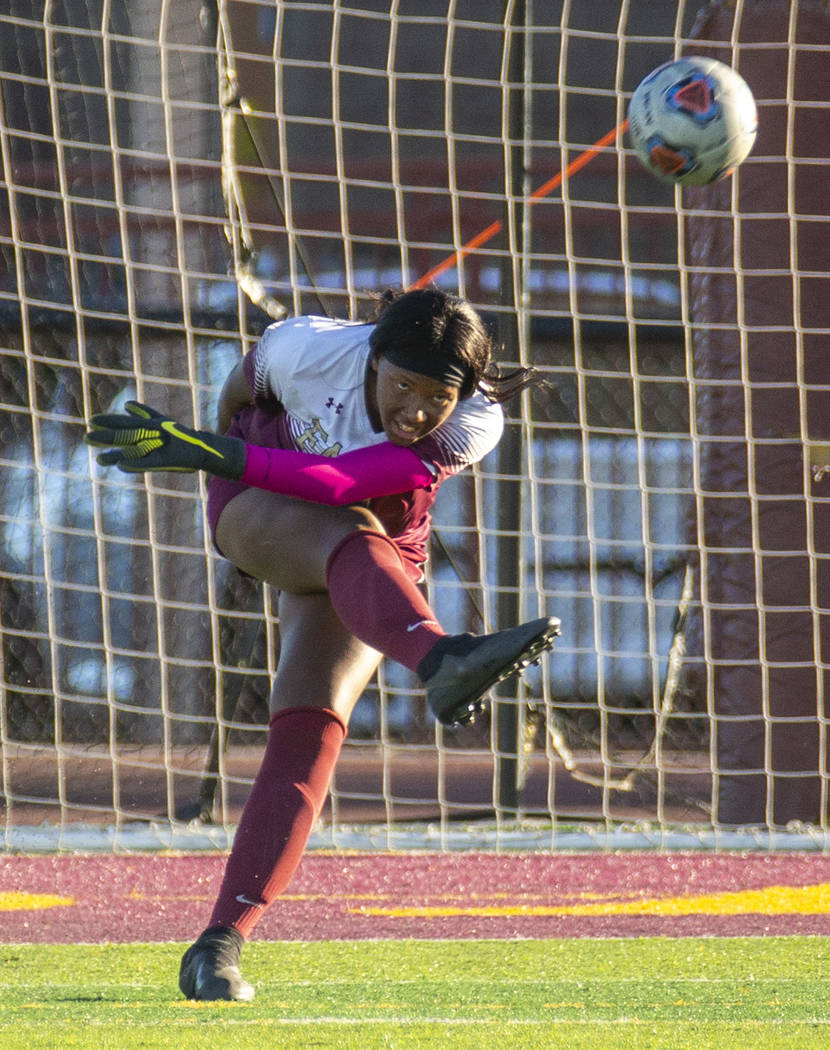 Faith Lutheran's goal keeper Jordan Brown (47) kicks the ball to teammates versus Arbor View during the first half of their soccer game on Monday, Oct. 7, 2019 in Las Vegas. (L.E. Baskow/Las Vegas Review-Journal) @Left_Eye_Images 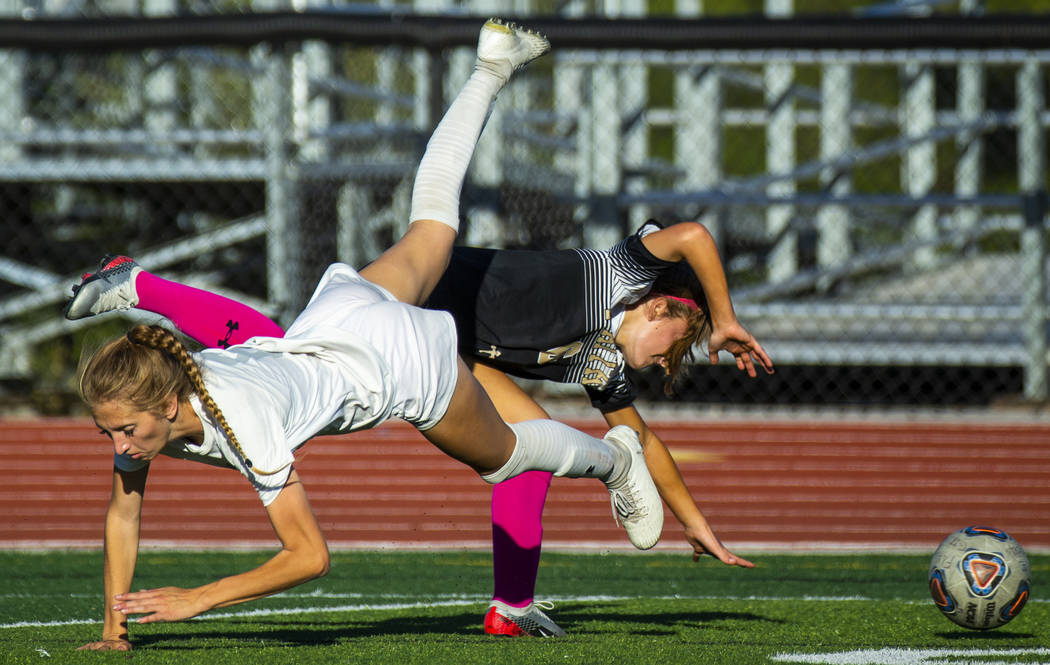 Arbor View's Abby Cassano (6, left) and Faith Lutheran's Camille Longabardi (6) collide over the ball during the first half of their soccer game on Monday, Oct. 7, 2019 in Las Vegas. (L.E. Baskow/Las Vegas Review-Journal) @Left_Eye_Images 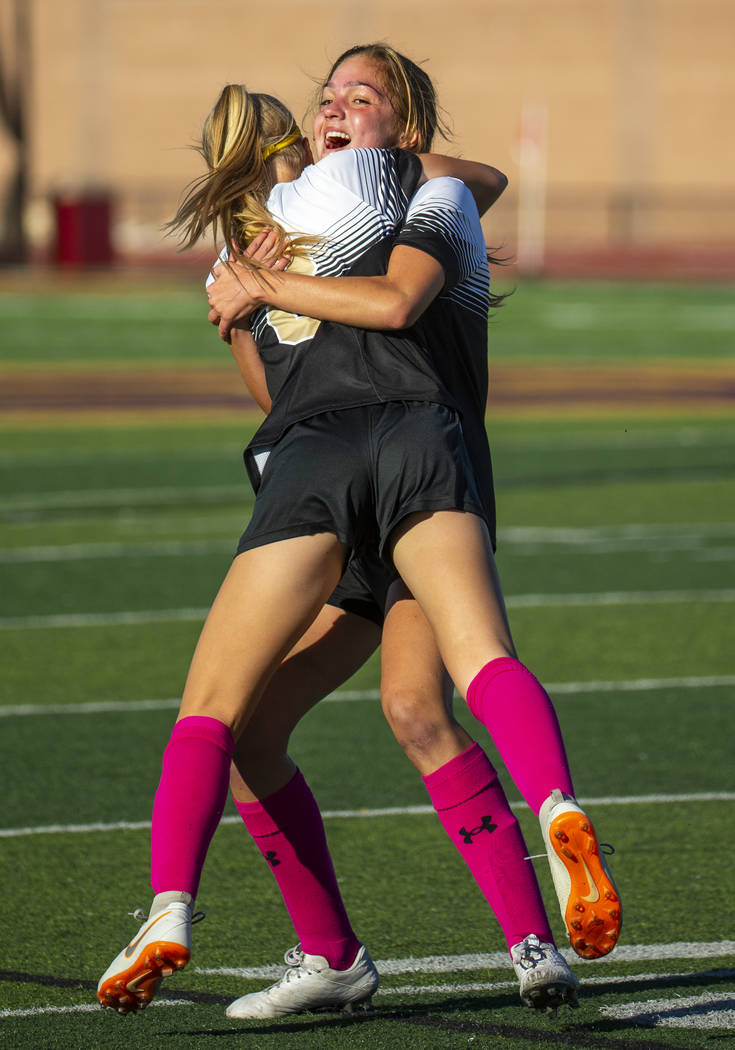 The Crusaders now are favored to win their first 4A state championship. They enter the state tournament as the Mountain Region champions with an unbeaten mark and a team full of skilled, versatile players.

The championship game is 11 a.m. Saturday at Hug.

Here’s a look at the Southern Nevada teams:

Quincy Bonds: The senior forward has a single-season school record 35 goals and leads the team with assists for 87 points. In the first round of the state tournament Saturday, Bonds scored four goals in a 5-2 win over Desert Oasis.

Battle-tested: The Bulldogs played a difficult schedule in and out of league play. They have the distinction of being the only team to tie Faith Lutheran and the only one to beat Coronado, and they had two wins over a strong Arbor View team.

“We have to get a win over Douglas. If we can put them away early, that would help. We would really like a rematch against Faith Lutheran (in the state championship game).” — Centennial coach Tony Clifford

Taylor Book: The senior goalkeeper has been the main cog in 14 shutouts for the Cougars. She was at her best in the Desert Region tournament, allowing one goal in three games.

Depth: The Cougars have worn down opponents late in games, in large part because of their depth.

“We have always had a good starting lineup. This year we have more depth, so we’ve been able to try different lineups and different formations for the full 80 minutes.” — Coronado coach Dana Neel

Amelia McManus: The senior forward has 29 goals, more than twice as many as any other Crusader. She also has seven assists for 65 points.

Versatility: The Crusaders have made a point to use several players in different positions. That paid off greatly last weekend, when they won the Mountain Region championship despite having five of their top players away with their club teams. They’re back at full strength this week.

“They’re very loose, and they’re very confident about where they are. We just have to stay focused and in the moment. They’re very well prepared, physically and mentally.” — Faith Lutheran coach Bob Chinn