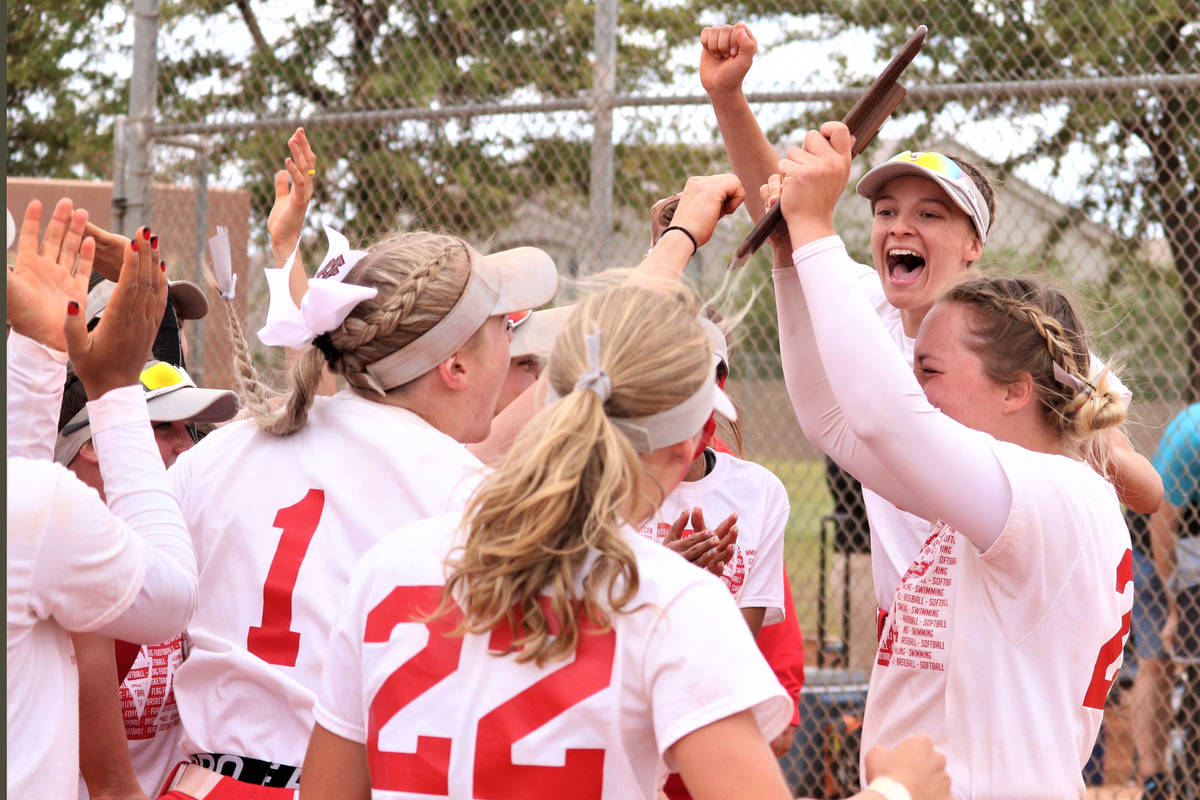 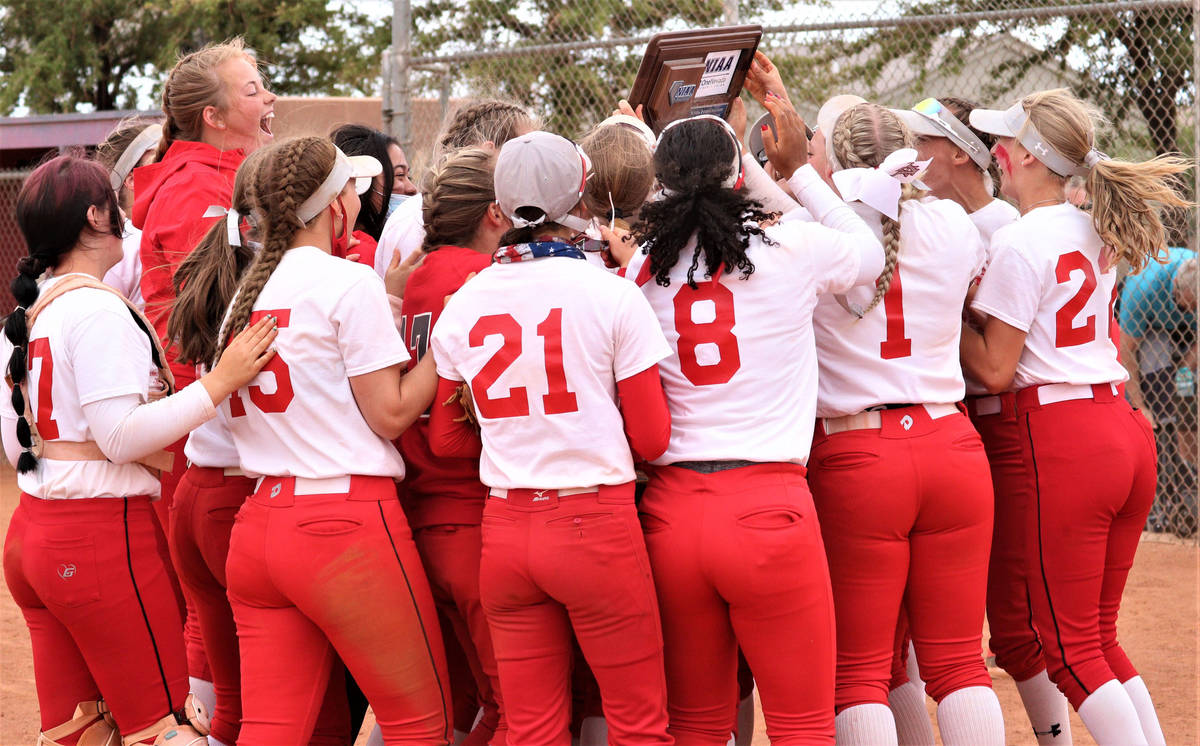 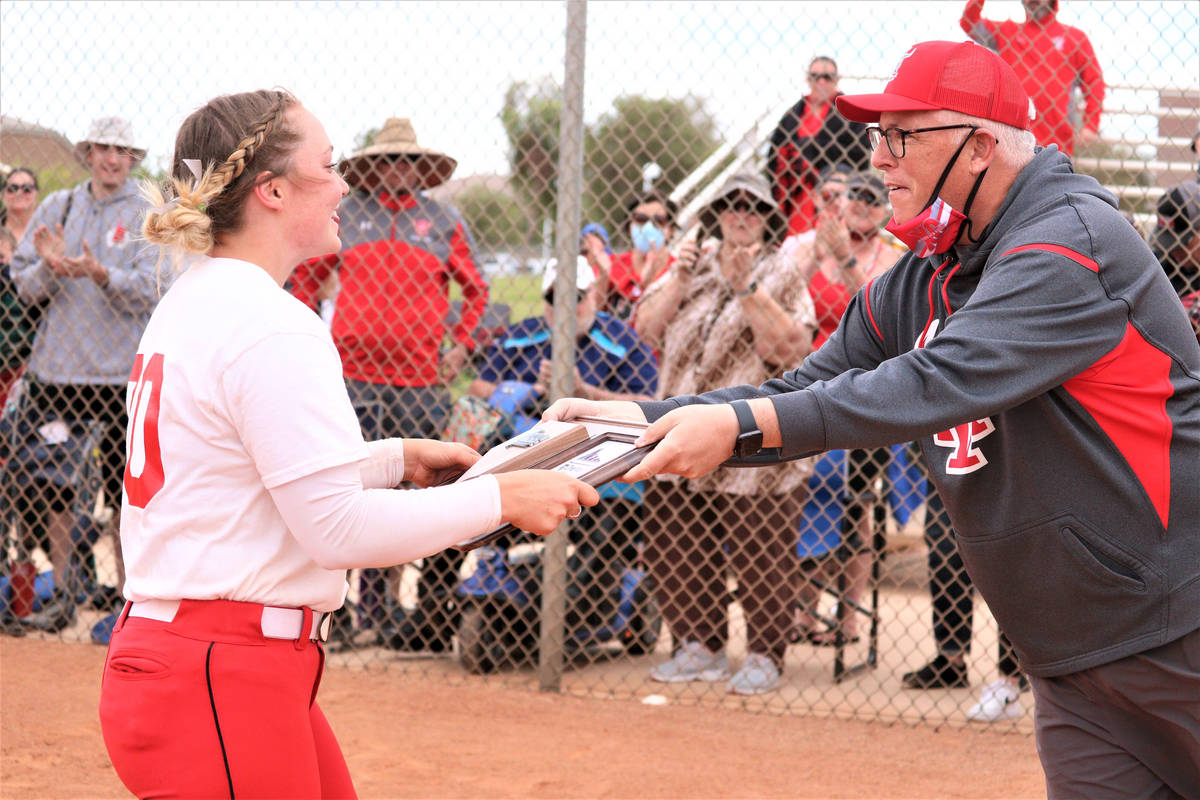 In some ways, the Class 5A regional championship softball game was a perfect encapsulation of Arbor View’s season.

The Aggies fell behind in the game early, like they did this season by losing 10 days to COVID-19. They regained the lead, only to fall behind again, as they did early in the season with a loss to Shadow Ridge in the regular season before a seven-game winning streak and a loss to Centennial that put them in the loser’s bracket of the Class 5A Southern Region tournament.

Arbor View might have bent at times, but it never broke. Trinity Brandon was 3-for-4 with two RBIs and two runs scored, and Annie Finch had just enough left in the tank at the end of 21 innings over two days in the circle to lift third-seeded Arbor View to a 6-5 win at home over No. 4 Shadow Ridge and its first regional title.

“This season has been crazy. We have gone through so much as a team, and I feel like together this year we have the best team and have played our best,” Brandon said. “Annie did a great job. She did the unthinkable yesterday and beat Centennial twice, and we couldn’t have done it without solid defense and great offense.”

One of the most important plays of the game happened in the top of the first inning. Shadow Ridge already had a run in and were threatening for more with runners on first and second with one out. Mariah Castellanos hit a fly ball to center field that was caught.

Both runners advanced, but one was called out on appeal to end the inning after a discussion between the umpires and Arbor View coach LeeAnn Jarvis.

“That was huge for us. It was an iffy call, but I felt like she did leave early and the umpires were on it,” Jarvis said. “It was great that we came up in the bottom half and banged two runs out.”

Shadow Ridge retook the lead in with two runs in the fifth, but Arbor View answered again with three in the bottom of the frame.

The Aggies added an insurance run in the sixth, which loomed large when Shadow Ridge scored twice in the seventh before Finch got a ground ball from Castellanos to end it.

Finch went the distance, allowing two earned runs on six hits. She struck out five, walked two and hit a batter in the win.

Brown and Morrow, Shadow Ridge’s top two hitters in the lineup, combined to go 6-for-7 with three doubles and all five runs scored. The rest of the lineup was 0-for-21.

No. 1 Bishop Gorman 8, No. 3 Silverado 3 — At Bishop Gorman, Olivia Bailey, Chloe Makinney and Julia Bilodeau each had a double, an RBI and two runs scored, and the Gaels closed out a perfect season (15-0).

Rylie Pindel earned the win in the circle by allowing two earned runs on six hits in a complete game. She struck out four and walked three.

No. 1 Virgin Valley 6, No. 2 Pahrump Valley 2 — At Virgin Valley, Riley Price threw a complete-game one-hitter, and the Bulldogs pounded out 14 hits to claim the championship.

At The Meadows, Needles scored 13 runs in the second inning and never looked back to grab the title.