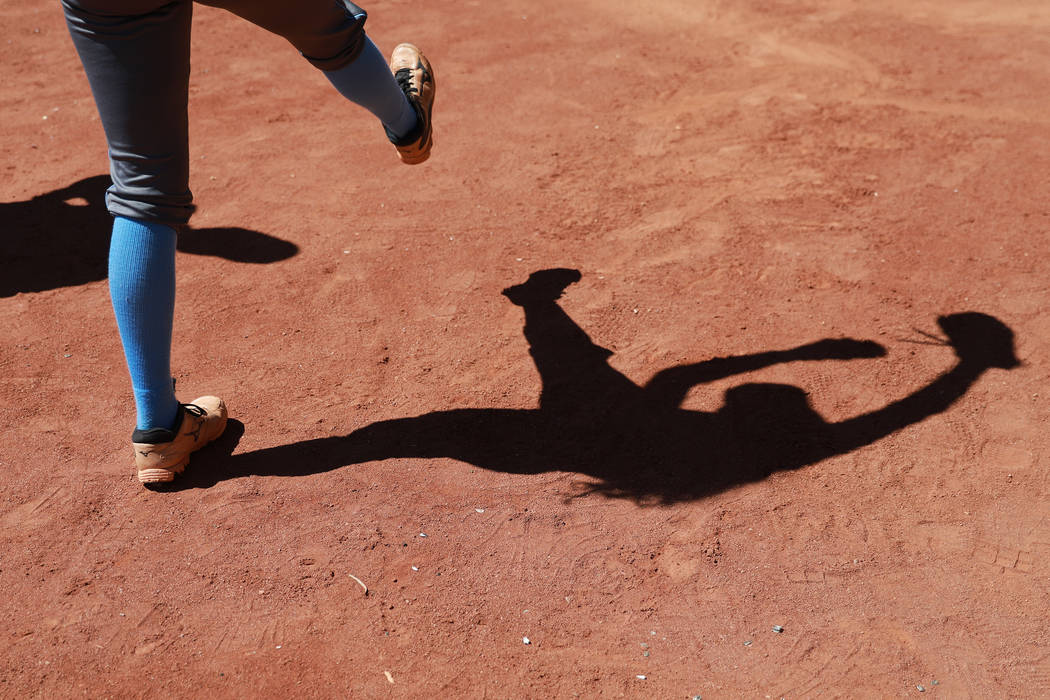 Rancho’s Kaitlyn Suarez went 2-for-3 with a double, and Ayanna Potter hit the go-ahead sac fly in the fifth inning for the Rams.

Mikayla Berg was 2-for-2 with a double for the Wolves.

Christabelle Garner pitched a complete game for the Miners.

Spring Valley 13, Bonanza 8 — At Bonanza, Madison Hood went 3-for-4 with two doubles and three RBIs as the Grizzlies defeated the Bengals.

Hood also pitched a complete game to earn the victory.

Bonanza’s Sara Riley was 2-for-4 with a double and two RBIs.

Moapa Valley 8, Del Sol 5 — At Overton, Kessa Evans went 2-for-4 with three RBIs, and Sierra Straheli was 3-for-3 with a double to lead the Pirates over the Dragons.

Aria Messer was 2-for-4 with a double, a home run and two RBIs for Moapa Valley, which scored four runs in the sixth to come from behind.

Durango 15, Bishop Gorman 0 — At Durango, Kaitlin Fazendin had two home runs and five RBIs to help the Trailblazers to a four-inning win over the Gaels.

Trinity Valentine pitched a one-hitter and went 2-for-3 with a solo homer, and Madisyn Conriquez went 2-for-2 with a double and two RBIs for Durango.

Chaparral 14, Tech 4 — At Chaparral, Losa Laolagi went 2-for-4 as the Cowboys rolled past the Roadrunners in five innings.

Losi Brown tossed a five-hitter to earn the victory and also hit a double for the Cowboys. Brizeida Mora-Herrera had a two-run single in the fifth inning to end the game by the 10-run rule.

Sierra Vista 16, Clark 0 — At Clark, Jessica Schneider and Tyerra Kaaialii combined on a three-inning no-hitter as the Mountain Lions routed the Chargers.

Jazmyn Martin was 2-for-2 with two doubles and four RBIs, and Jamie Kalaau-Sunia drove in three runs for Sierra Vista.

Schneider struck out five and walked one in two innings, and Kaaialii struck out the side in the third.

Pahrump Valley 14, Mojave 0 — At Pahrump, Taylor Egan was 3-for-3 with three doubles and five RBIs as the Trojans beat the Rattlers in five innings.

Cheyenne 15, Western 0 — At Cheyenne, Giovanna Bojorquez went 4-for-4 with a double, an RBI, and three runs as the Desert Shields rolled past the Warriors in four innings.

Cheyenne’s Madelynn Kennedy tossed a three-hitter and struck out 10 to earn the victory. Jessica Mercado went 3-for-4 with four runs and an RBI, Hannah Tennant was 2-for-3 with two doubles and four RBIs, and Amanda Moore hit a double for Cheyenne.

Indian Springs 6, Lake Mead 3 — At Tuscany Park, Aspen Avery spun a three-hitter with 14 strikeouts to lead the Thunderbirds over the Eagles.

Josey White was 2-for-3 with a triple and an RBI for Lake Mead, and Lauryn Fruend fanned 13 for the Eagles.