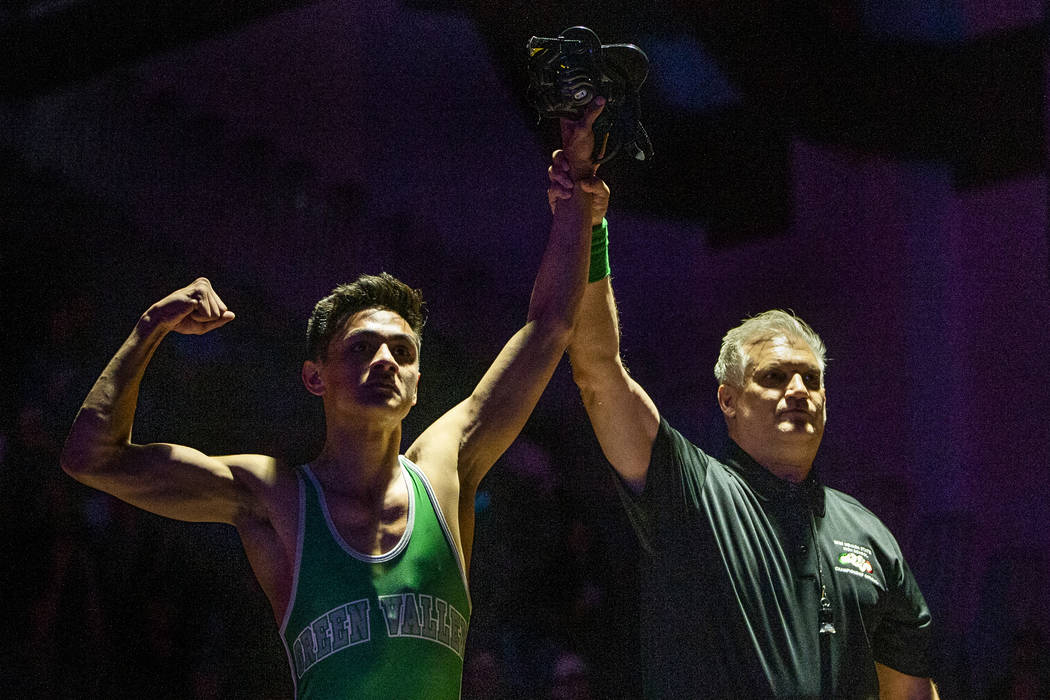 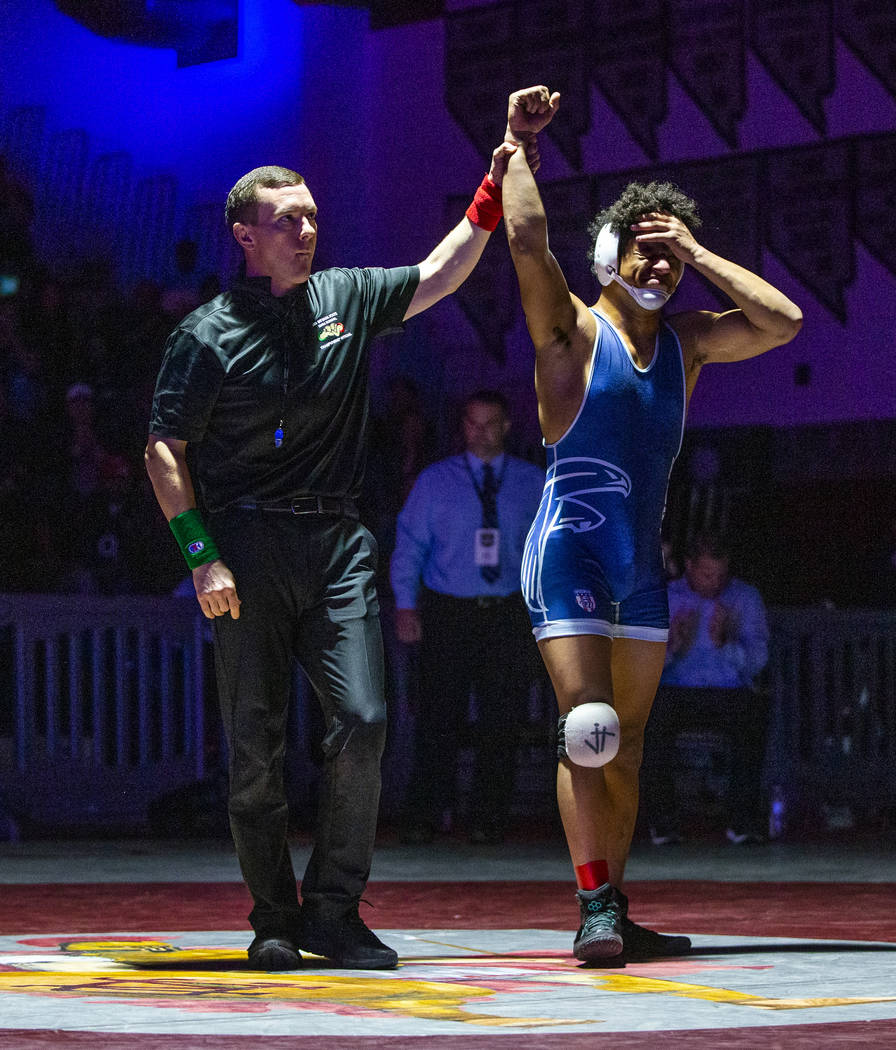 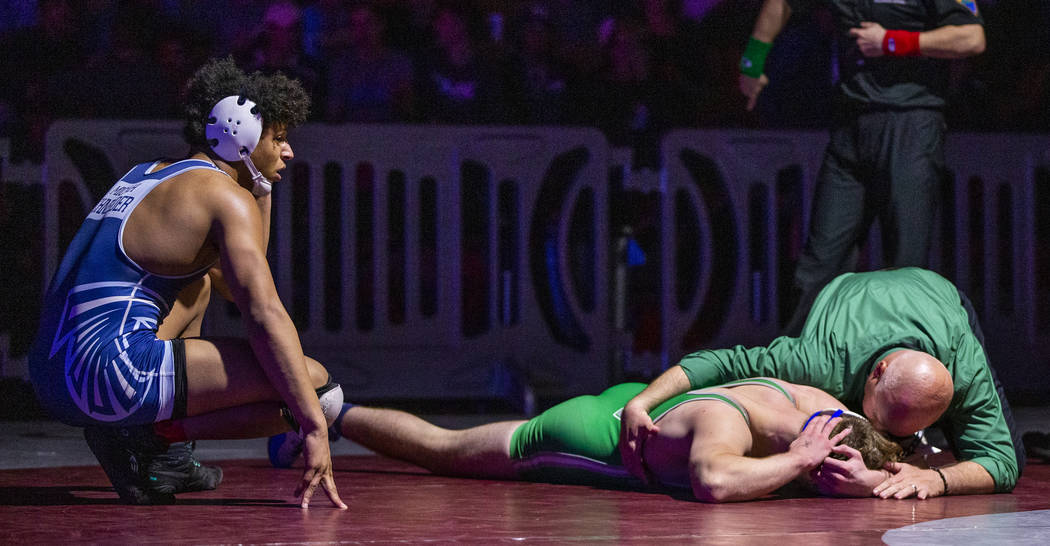 Foothill's Micah Schneider, left, looks to an injured Green Valley's Derek Recktenwald on the mat in their 160 pound match during the 4A state wrestling tournament at Cimarron-Memorial High School on Saturday, Feb. 15, 2020, in Las Vegas. (L.E. Baskow/Las Vegas Review-Journal) @Left_Eye_Images 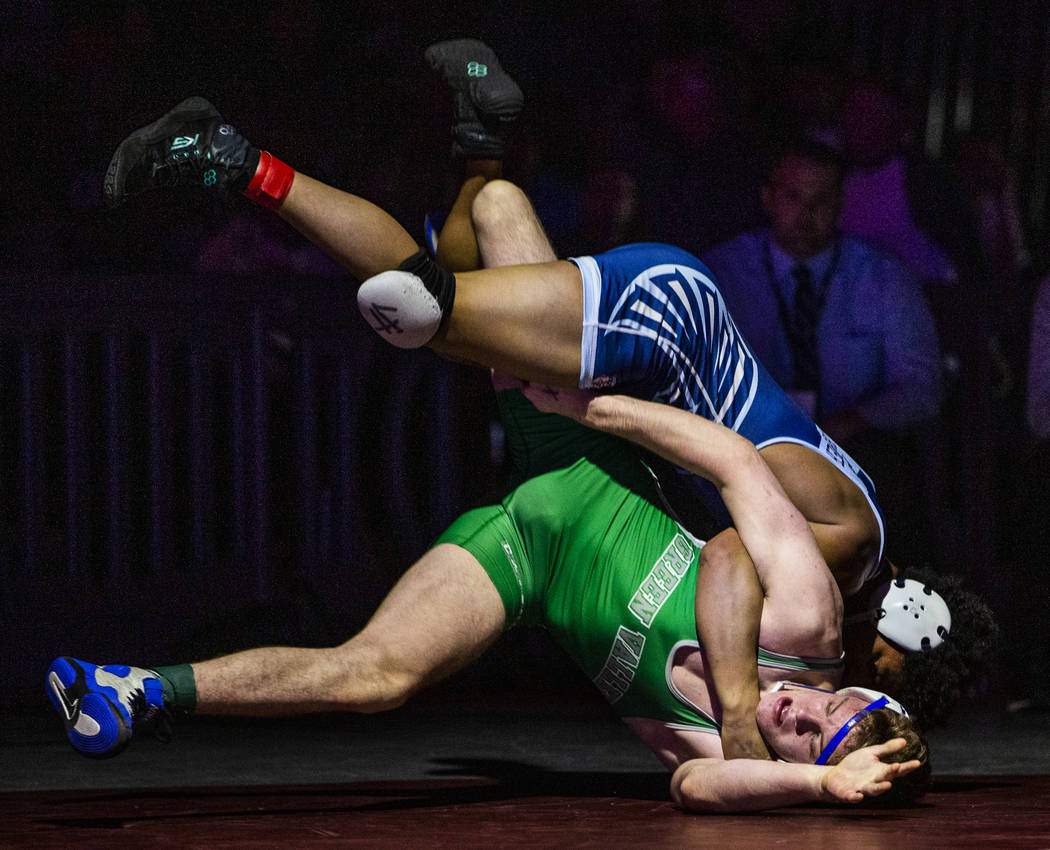 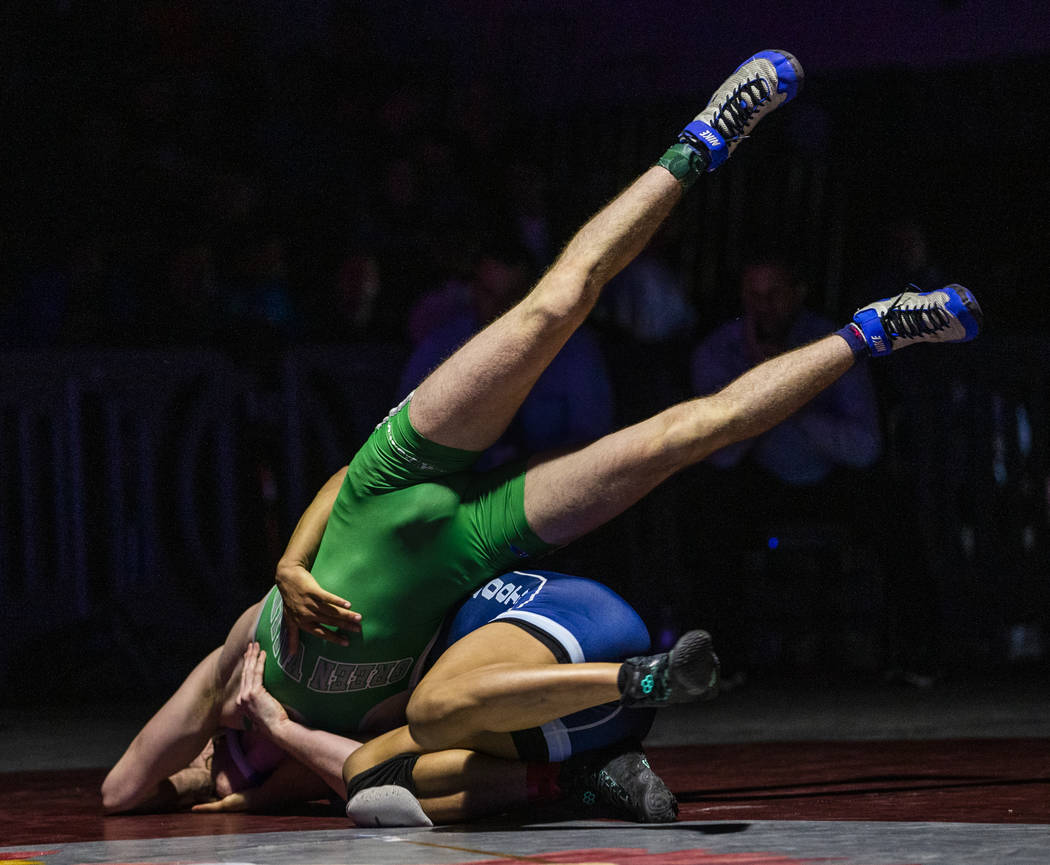 Green Valley's Derek Recktenwald, left, is tossed to the mat by Foothill's Micah Schneider in their 160 pound match during the 4A state wrestling tournament at Cimarron-Memorial High School on Saturday, Feb. 15, 2020, in Las Vegas. (L.E. Baskow/Las Vegas Review-Journal) @Left_Eye_Images 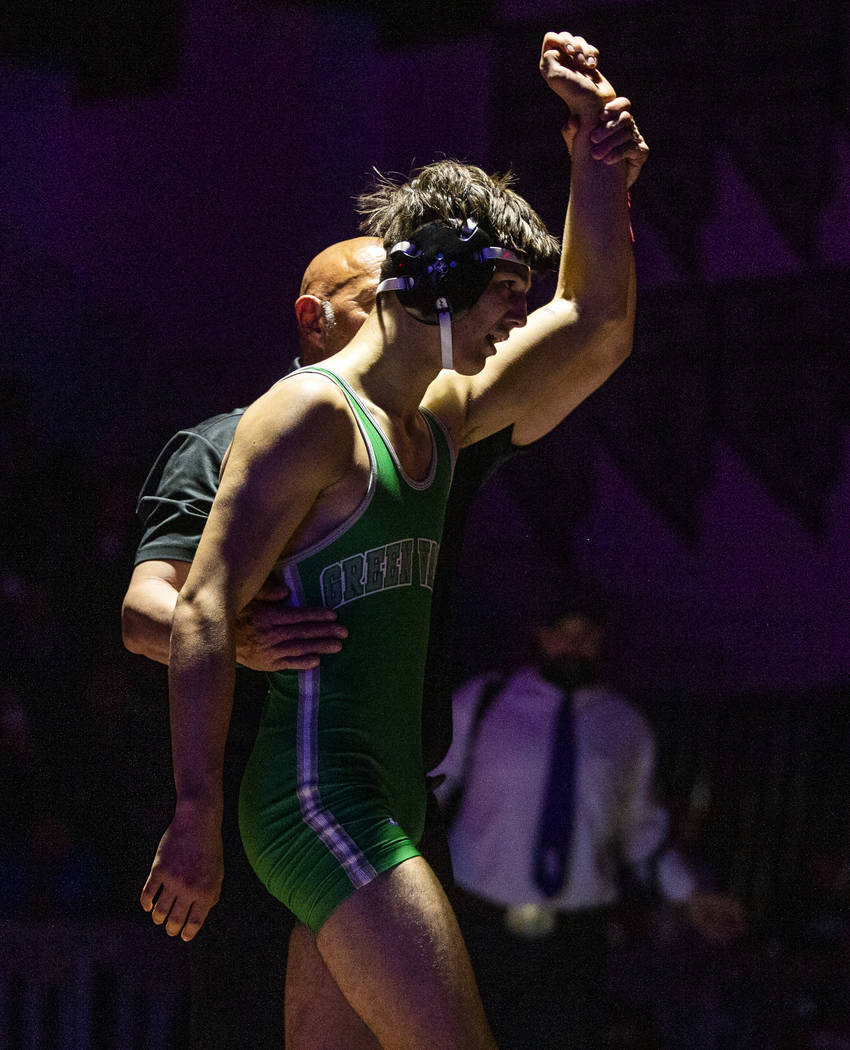 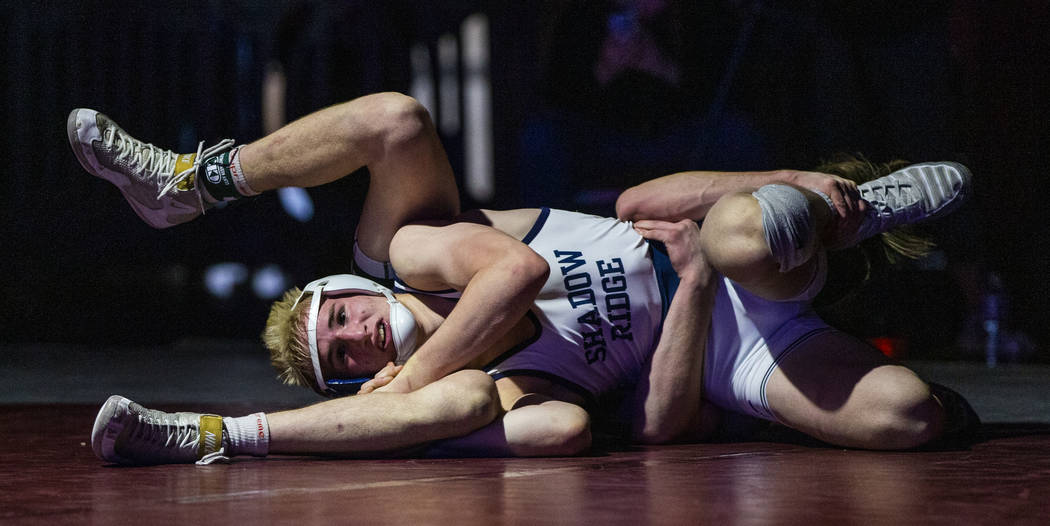 Shadow Ridge's Weston Presser, front, is wrapped up from hind by Green Valley's Jeremy Hoffman in their 145 pound match during the 4A state wrestling tournament at Cimarron-Memorial High School on Saturday, Feb. 15, 2020, in Las Vegas. (L.E. Baskow/Las Vegas Review-Journal) @Left_Eye_Images 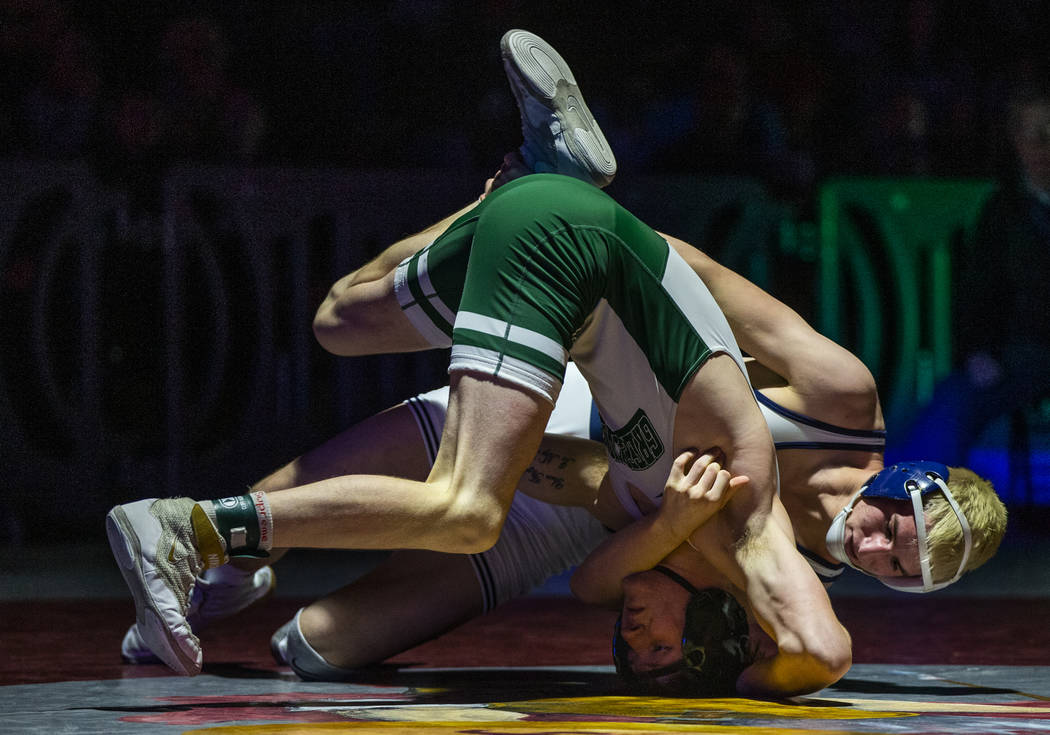 Green Valley's Jeremy Hoffman, left, is driven into the mat by Shadow Ridge's Weston Presser in their 145 pound match during the 4A state wrestling tournament at Cimarron-Memorial High School on Saturday, Feb. 15, 2020, in Las Vegas. (L.E. Baskow/Las Vegas Review-Journal) @Left_Eye_Images 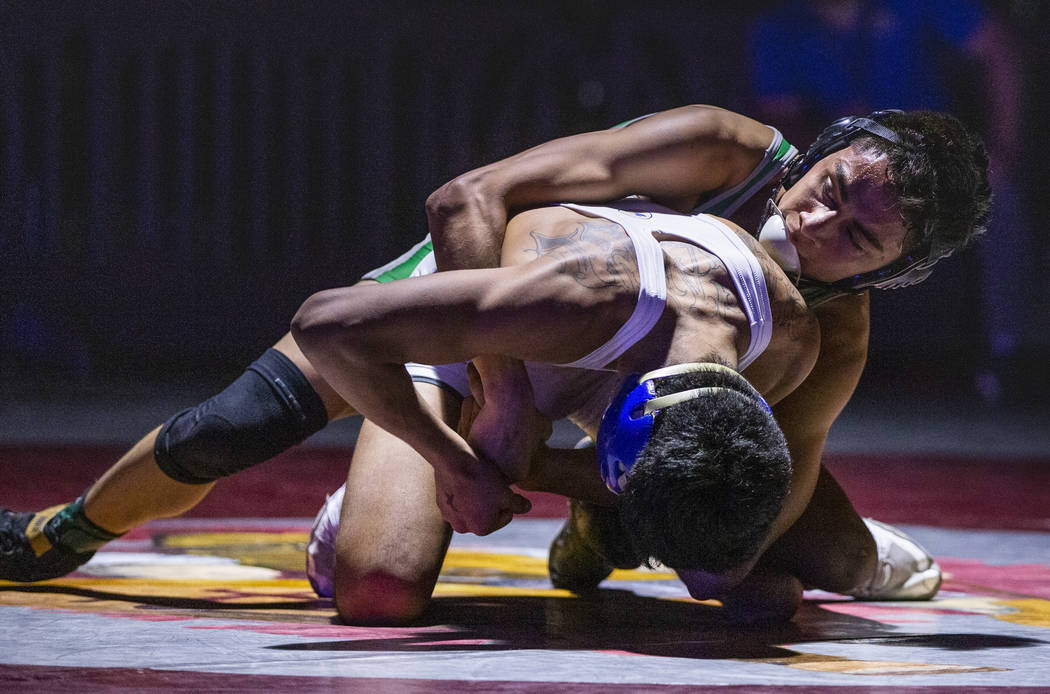 Reed's Alejandro Casarez, left, is dominated from behind by Green Valley's David Kalayanaprapru in their 138 pound match during the 4A state wrestling tournament at Cimarron-Memorial High School on Saturday, Feb. 15, 2020, in Las Vegas. (L.E. Baskow/Las Vegas Review-Journal) @Left_Eye_Images 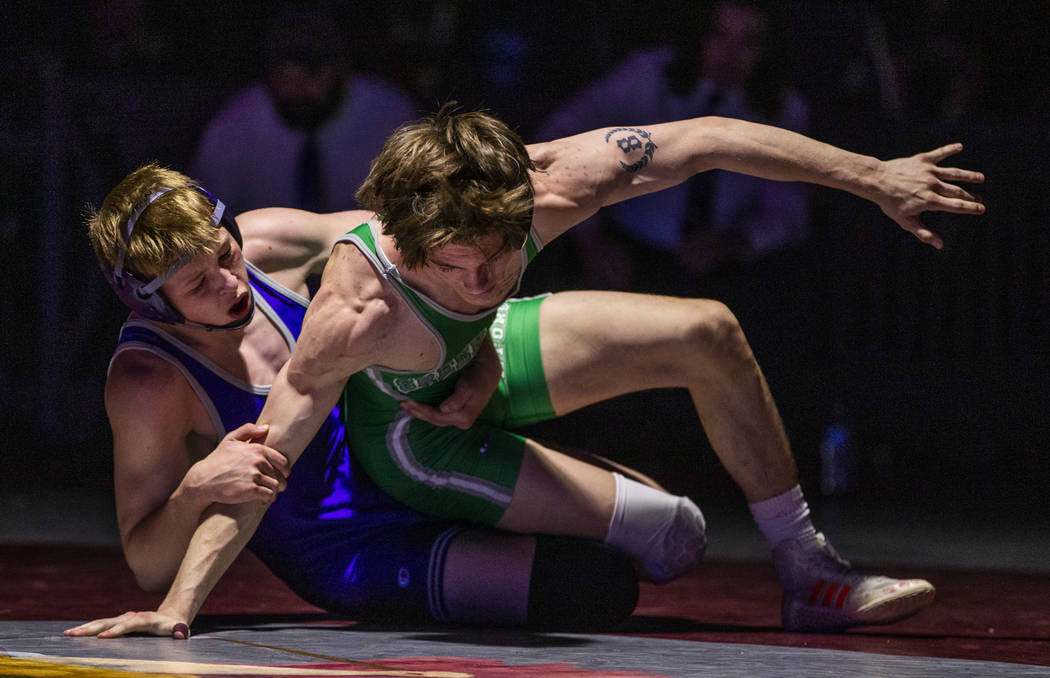 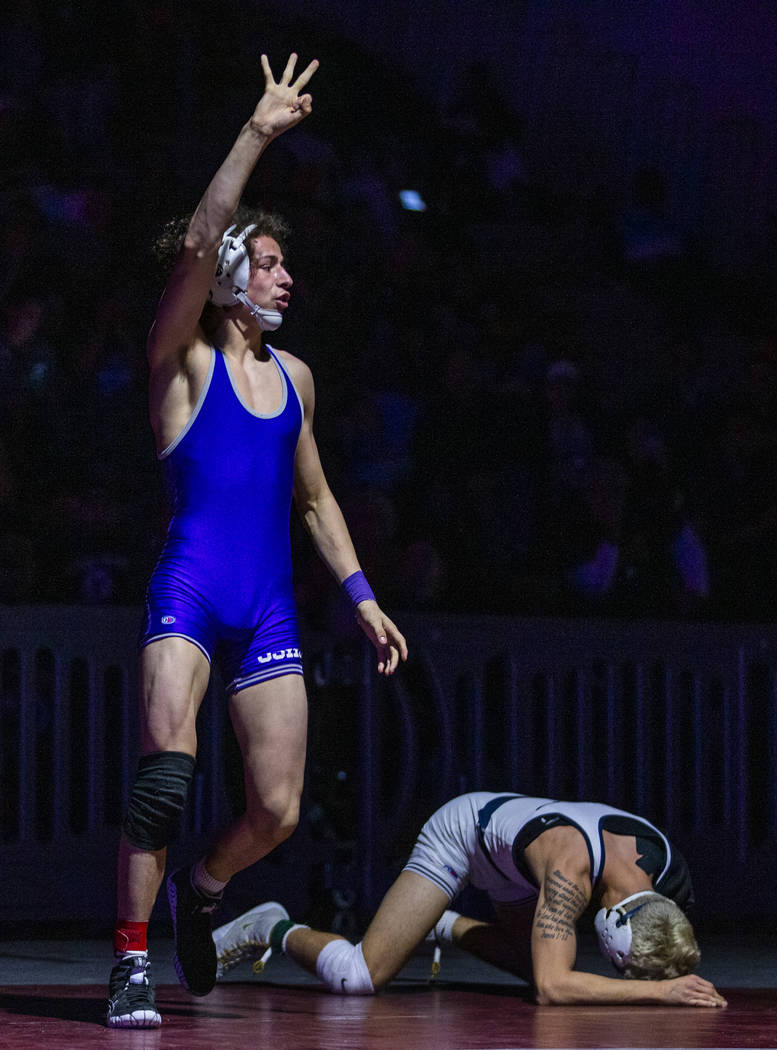 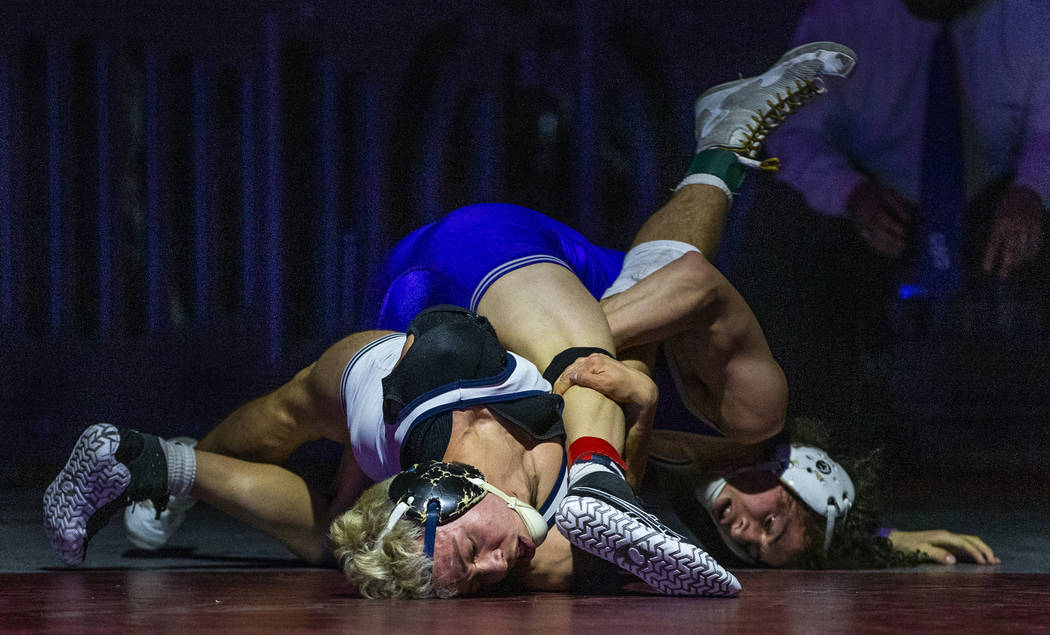 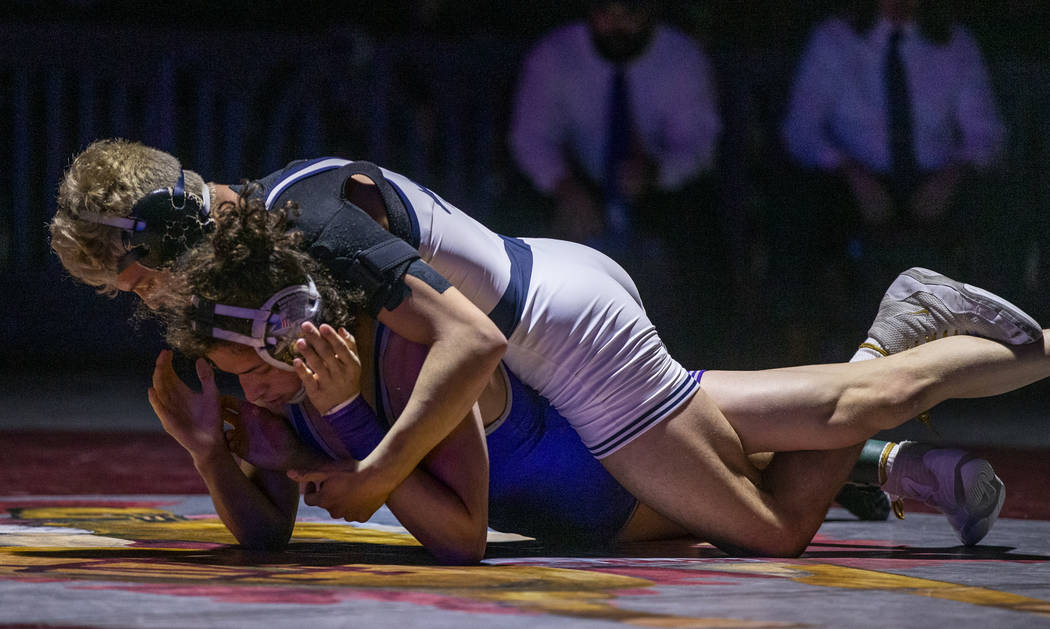 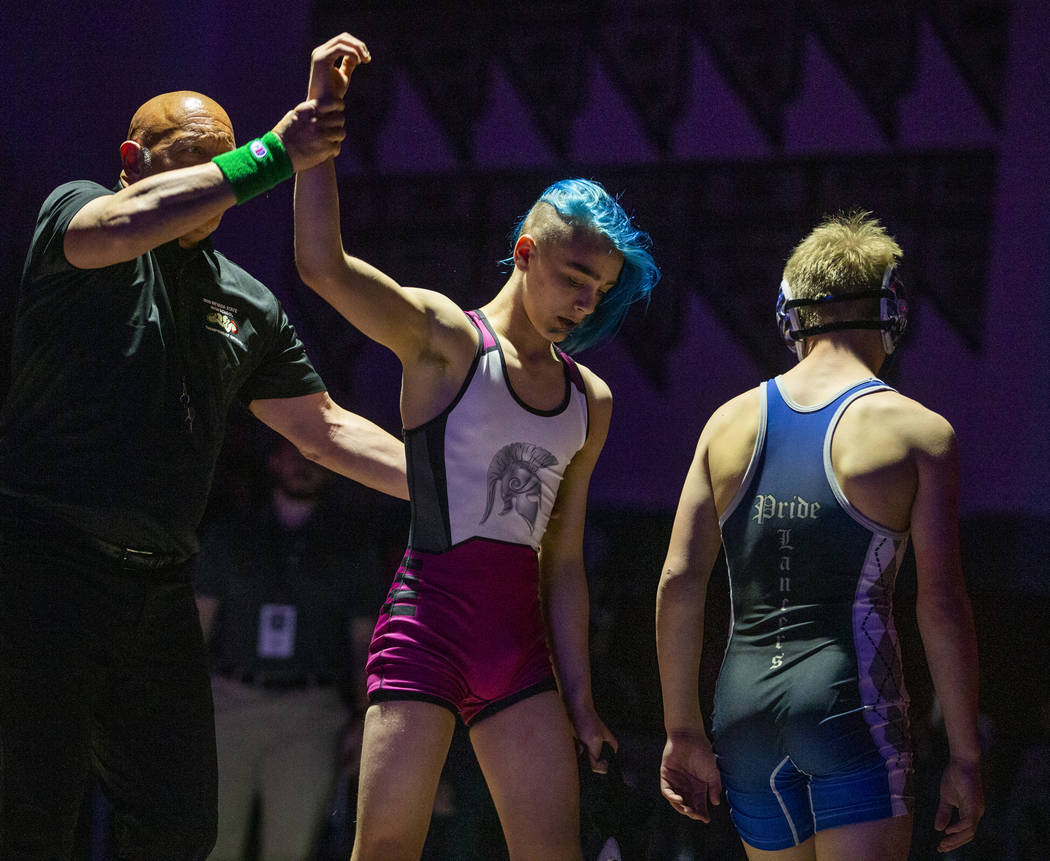 McQueen's Preston Harn, front, is close to being pinned by Cimarron-Memorial's Otto Cate-Cribari in their 120 pound match during the 4A state wrestling tournament at Cimarron-Memorial High School on Saturday, Feb. 15, 2020, in Las Vegas. (L.E. Baskow/Las Vegas Review-Journal) @Left_Eye_Images 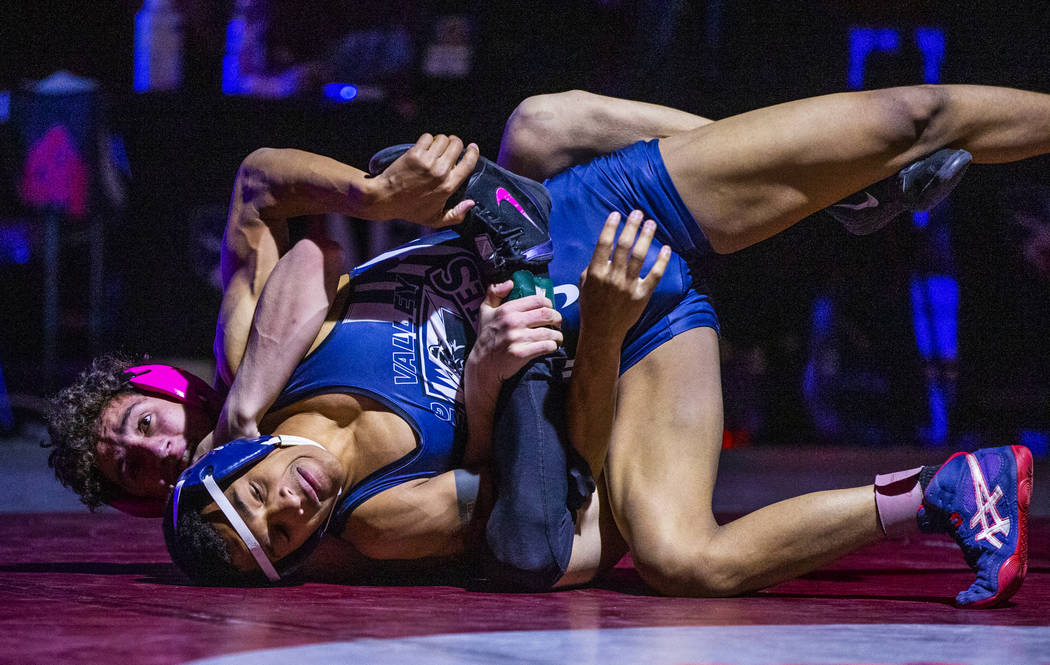 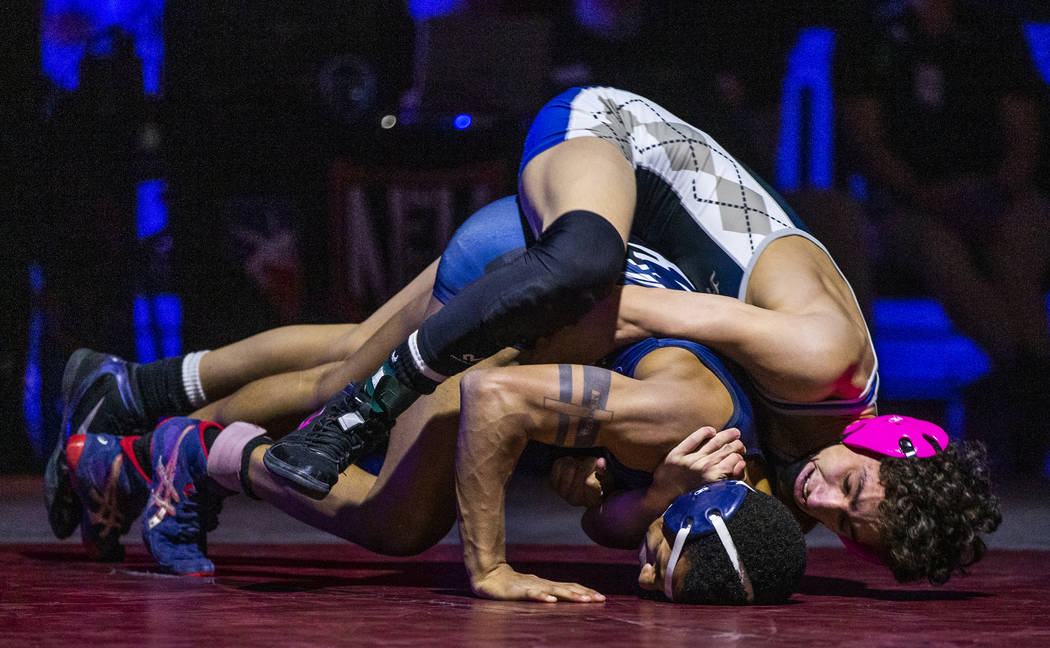 Spring Valley's Ryan Mitchell, left, is wrapped up from behind by McQueen's Jahaun Hicks in their 113 pound match during the 4A state wrestling tournament at Cimarron-Memorial High School on Saturday, Feb. 15, 2020, in Las Vegas. (L.E. Baskow/Las Vegas Review-Journal) @Left_Eye_Images 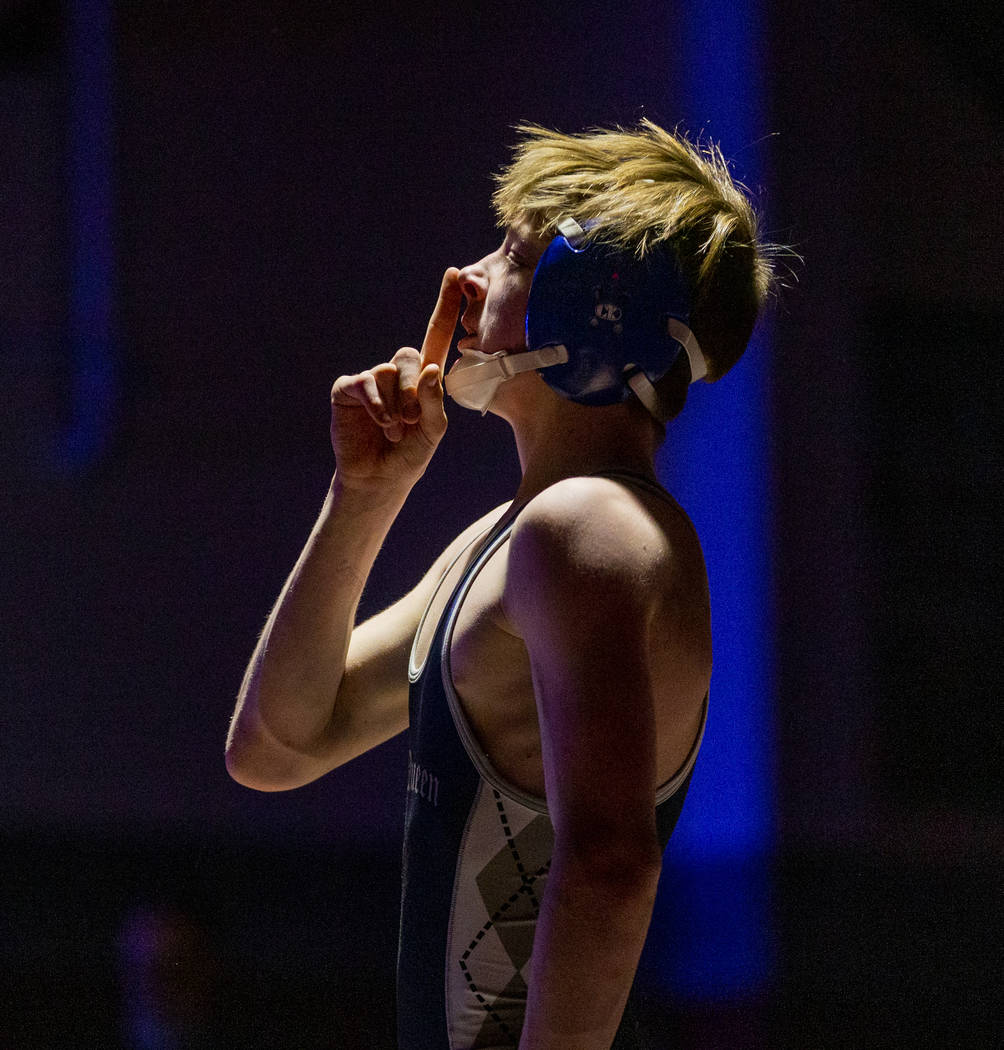 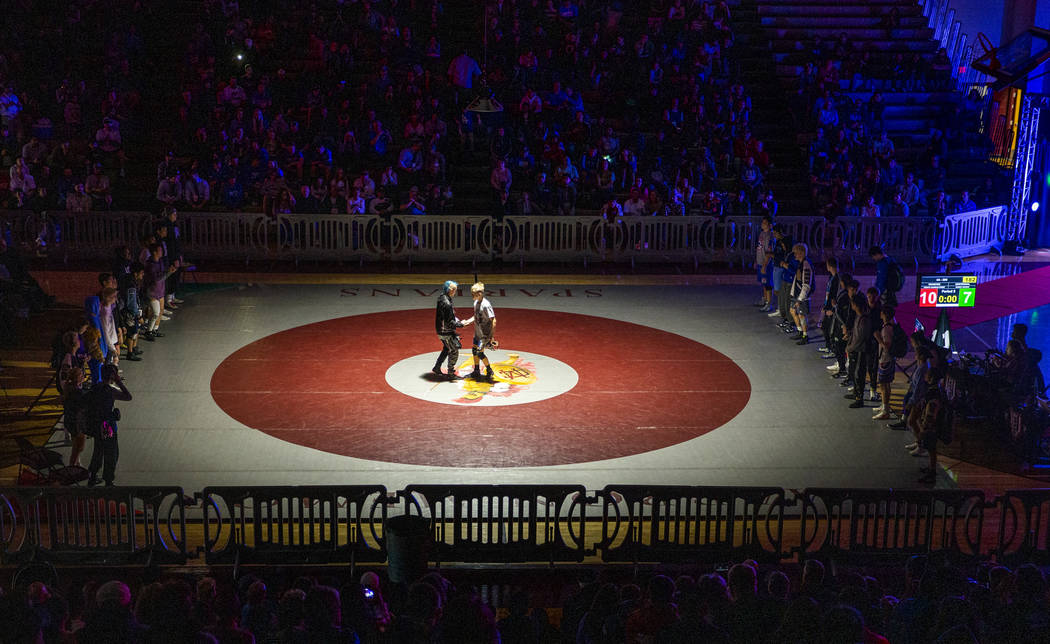 Competitors meet in the center of the mat after being introduced during the 4A state wrestling tournament at Cimarron-Memorial High School on Saturday, Feb. 15, 2020, in Las Vegas. (L.E. Baskow/Las Vegas Review-Journal) @Left_Eye_Images

As David Kalayanaprapruit sat in an ambulance about a month ago with a dislocated elbow, he thought his career as a wrestler for Green Valley was over.

When the senior found out his recovery wouldn’t keep him out of postseason meets, it was more than a relief.

“Finding out my season wasn’t over just sparked a flame under me, and it gave me motivation to give it my best,” Kalayanaprapruit said. “I thought I’d lost the opportunity to win state. So knowing I had the opportunity gave me more drive than I ever had.”

He made good on that chance Saturday at Cimarron-Memorial High School, winning the Class 4A title at 138 pounds with a 5-3 decision over Reed’s Alejandro Casarez.

Kalayanaprapruit’s recovery was such a question mark that he wasn’t a point-scorer for the team at regionals or state. But Green Valley still had enough to win its seventh title in nine years and end Spanish Springs’ two-year reign.

The Gators finished with 122.5 points. Shadow Ridge was second with 103.5 and Cimarron-Memorial third with 103.

“We’ve got a core of elite guys, and that’s what put us over the edge,” Green Valley coach Jon Ferry said. “Being able to put six guys in the finals is something we’ve never done before. Some teams might be a little deeper, but we did our part by having our elite guys do their job.”

Ferry said neither Kalayanaprapruit nor Uhlenhopp did anything special in their matches. They just stuck to their game plan and found a way to score enough points, the coach said.

“It was the greatest feeling I’ve ever felt, knowing it was the hardest thing I’ve ever worked for up to this point,” Kalayanaprapruit said. “It’s surreal to me, and I’m still a little speechless thinking about it.”

Shadow Ridge’s second-place finish was the best in school history, and the Mustangs had two state champions for the first time. But they also had some stumbles that kept them from making a run at the team title.

“We had a couple matches we were expecting to go the other way,” Shadow Ridge coach Gus Gledhill said. “It started off bad, but the kids responded. They came back and got second place, so I couldn’t be prouder.”

Weston Presser and Noah Gallardo won state titles for Shadow Ridge. Presser led 11-1 against Green Valley’s Jeremy Hoffman before holding on for a 13-9 win at 145. Gallardo took control early against Cimarron-Memorial’s Jayden Johnson at 182 en route to a 15-4 major decision.

“When it didn’t pan out the way we wanted it to with the team score, the two kids I wanted especially to win the state title because they hadn’t done it before were Weston Presser and Noah Gallardo,” Gledhill said. “Seeing those two atop the podium makes it all worth it.”

SLAM takes second in 3A

At the Class 3A meet at Virgin Valley, Spring Creek scored 182 points to win the title by 14 over SLAM Academy.

Battle Mountain won the Class 2A team championship at Virgin Valley with 201 points. Yerington was second with 189.5 and Spring Mountain third with 83.

Pahranagat Valley had two champions in Tayt Leavitt at 195 and Reese Thornton at 220. Trevin Perkins won the title at 182 for Lincoln County.