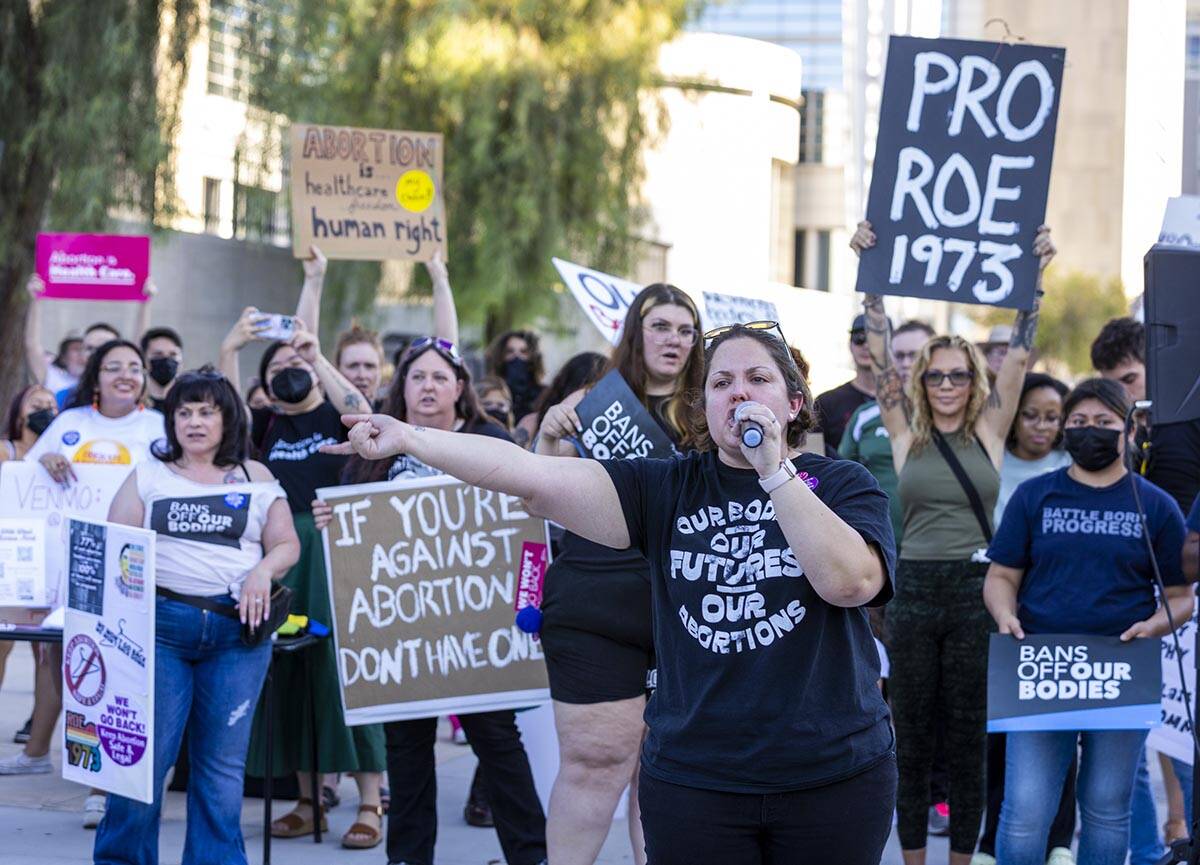 Annette Magnus with the Battleborn Progress pumps up the crowds while speaking in response to Roe v. Wade being overturned today at the Lloyd D. George Federal Courthouse on Friday, June 24, 2022, in Las Vegas. (L.E. Baskow/Las Vegas Review-Journal) @Left_Eye_Images 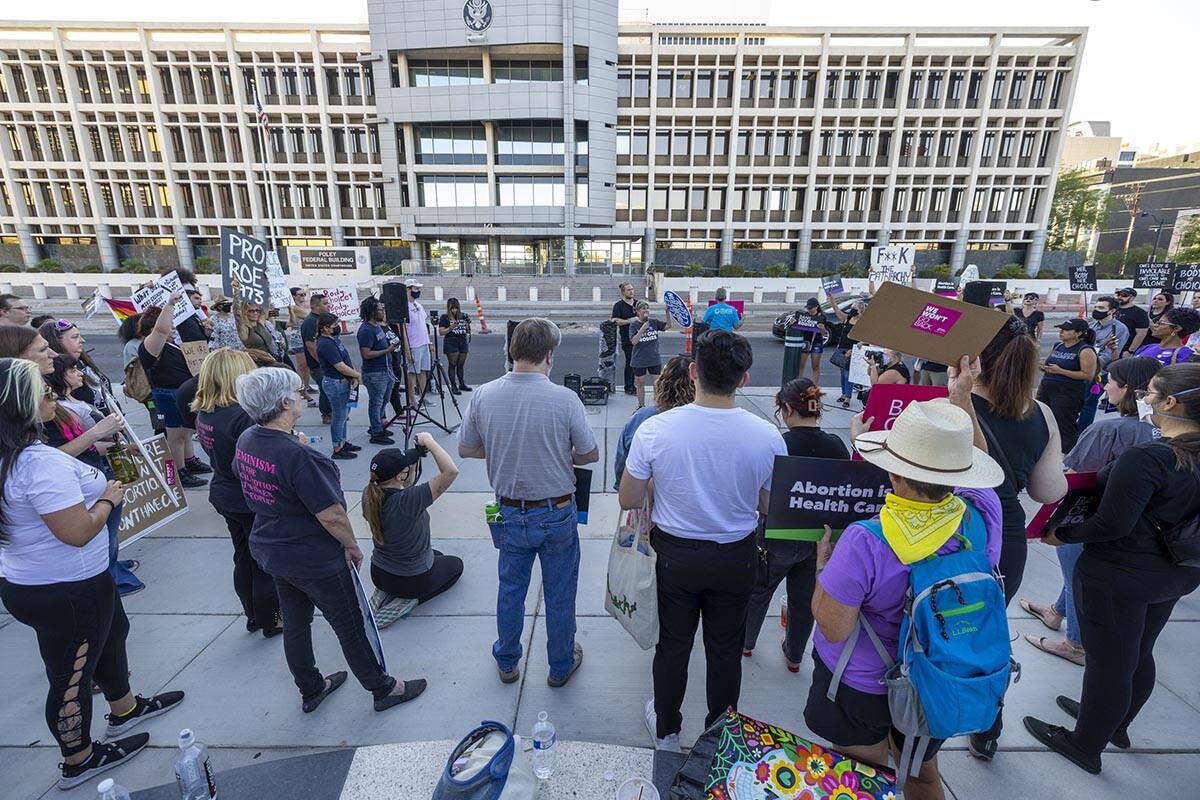 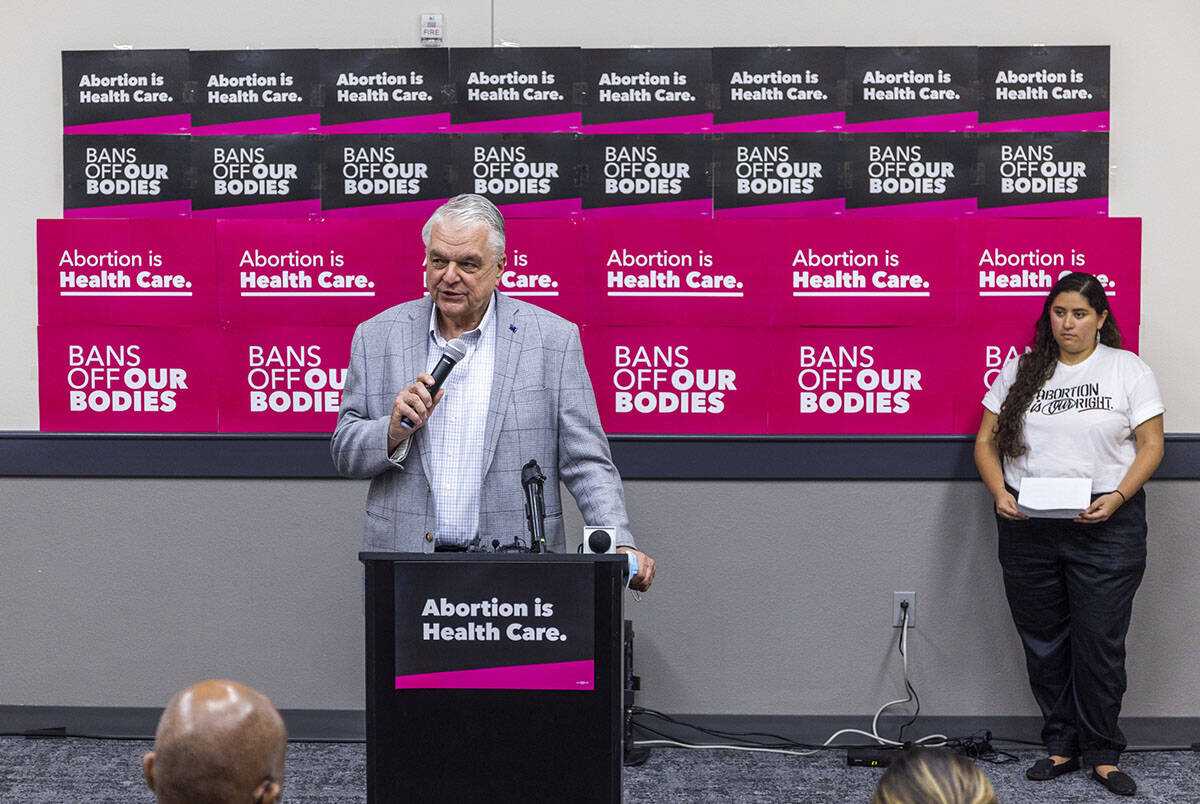 The Supreme Court overturned nearly 50 years of constitutional protections for abortion on Friday, ushering in likely abortion bans across much of the country.

But in Nevada, abortion has been enshrined in state law for more than three decades through a process that is difficult to undo. Despite the relative ease of access in Southern Nevada, residents in northern or rural portions of the state have fewer options when it comes to finding abortion providers.

Here’s what you need to know about state law and abortion access in Nevada:

Can I still get an abortion in Nevada, and where do I go?

Yes, abortion is legal in Nevada. While other states have enacted trigger laws that outlaw or restrict abortions now that Roe v. Wade is overturned, Nevada has enshrined the right to abortion in state law.

The Wild West Access Fund of Nevada, a nonprofit that provides financial support for people seeking abortions, lists nine clinics that provide abortions in the state. Seven of the clinics are in Las Vegas, and two are in Reno.

Recent abortion restrictions leading up to the overturn of Roe v. Wade have put some strain on Nevada providers, but clinics in the Las Vegas area have yet to be overwhelmed, said Macy Haverda, a board member of the Wild West Access Fund.

“If tomorrow you needed to schedule an appointment, you would find a way to be able to get one in a relatively short turnaround,” Haverda said about access in Las Vegas. “In Reno it’s a little harder, and in Reno its significantly more expensive. And in the rural (counties) there’s absolutely no access without driving pretty far, depending on where you’re coming from.”

Haverda said anyone who cannot afford an abortion in Nevada can apply for financial assistance at wildwestfund.org.

What exactly does Nevada law say about abortions?

Nevadans in 1990 voted by a nearly two-thirds margin in favor of a referendum legalizing abortions within the first 24 weeks of pregnancy. Because the law was approved by voters, not the Legislature, only voters can change the law in the future, said David Orentlicher, the director of UNLV’s health law program.

“I think the fact that this is based on a voter referendum certainly does make it harder to change, and it protects the right to abortion in Nevada,” he said.

After 24 weeks, abortions are legal if a doctor determines the pregnancy is endangering someone’s life, physical health or mental health, Orentlicher said.

If you are under 18, state law says you have to receive permission from a parent or guardian, or a court order, before getting an abortion. However, the law has not been enforced since it was challenged by Planned Parenthood and struck down in federal court.

In February, a Nevada PAC launched a petition to build support for an initiative that would require doctors to notify parents when a minor plans to have an abortion.

In 2019, Gov. Steve Sisolak signed a bill which formally decriminalized abortions and changed some details of Nevada’s informed consent laws, such as removing requirements that doctors provide information about potential emotional ramifications of an abortion, or ask a woman’s age and marital status.

Does the Supreme Court decision change anything in Nevada?

But while changing state law may take a significant effort, bans or restrictions in other states could lead to an influx of patients seeking abortions in Nevada, Planned Parenthood representatives told the Las Vegas Review-Journal this month.

Haverda said abortion clinics in Southern Nevada have already seen an increase in patients from northern Arizona. She also expects more patients from Utah, which has a trigger law that could ban most abortions in the state.

UNLV political science professor Rebecca Gill recently told the Review-Journal that while she thinks Nevadans are unlikely to change the law, a national ban from the federal government would supersede the state law.

In a statement released Friday, the American Civil Liberties Union of Nevada warned that a national ban is possible.

“Abortion access here in Nevada may be safe for now, but extremists have made it clear that they will work to ban abortion nationwide,” Athar Haseebullah, executive director of the ACLU of Nevada, said in the statement. “None of our rights or liberties are secure in the face of a Supreme Court that would reverse Roe.”

Is anyone in Nevada trying to ban abortions?

Melissa Clement, executive director of the anti-abortion group Nevada Right to Life, has said there have been discussions with political candidates about abortion restrictions, but not efforts to repeal Nevada’s abortion statute.

The Republican nominee for governor, Clark County Sheriff Joe Lombardo, has a small section on his campaign website labeled “Protecting the Unborn,” which states that he is “pro-life.” But when moderators at a debate in May asked if he would consider any specific restrictions on abortion, Lombardo said “not at this time.”

In a statement Friday, Lombardo applauded the Supreme Court’s decision giving state the power to restrict abortions. Lombardo said he trusts Nevada voters “to make the best decision for our state.”