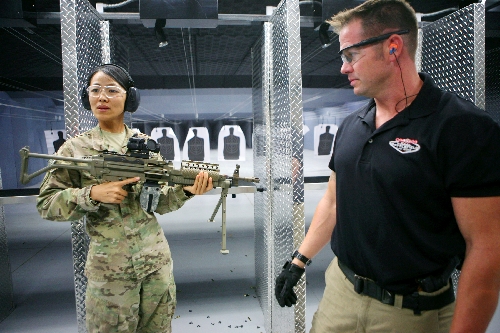 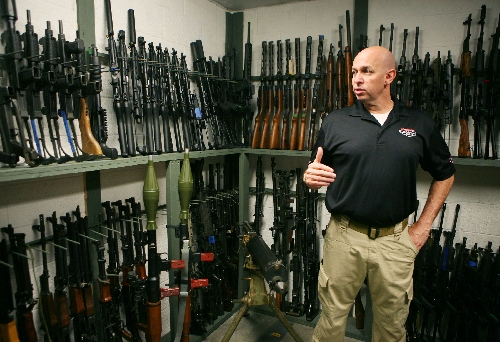 The noise, enough to make a person wince, was muffled by snug-fit headsets worn by the shooter and the range safety officer at her side.

It was opening day Monday at Battlefield Vegas, the new $2.5 million military theme park on Industrial Boulevard at Circus Circus Drive. Billed as the "Ultimate Machine Gun Experience" in a resort town with no shortage of machine gun experiences, the attraction lets tourists learn about military history and take photos in a number of settings: World War II tent in North Africa; 1944 Willy’s jeep; Vietnam-era UH-1C "Huey" helicopter; one of eight "deuce-and-half" troop carrier and supply trucks parked around the 5-acre premises.

Squeezing the trigger of the MK-46 Squad Automatic Weapon on Monday was Army Reserve 1st Lt. Xiao Sessler. Her 120-pound frame riveted with each burst from the 14-pound weapon, but she leaned into the recoil as her shots ripped through the center of a silhouette target about 25 yards away.

The machine gun, an enhanced version of an M-249 SAW, held steady. Its bi pod mount and red-dot optic sight made it easy for Sessler, a seasoned soldier home on leave from Afghanistan, to hit the chest of the silhouette.

With the flip of a switch, the target zipped back on a cable to the metal-framed booth where Range Safety Officer Matt Supnick unclipped it and handed it to Sessler’s husband, Korean War veteran Warren Sessler.

"That would be one dead insurgent," Warren Sessler said, gazing at the pattern.

Now it was his turn.

In a matter of seconds he ripped off five or six bursts that pierced the center of the target. In less than two minutes, all that was left from 50 rounds was the scent of spent gunpowder.

"Damn. I wish I could have had this at Outpost Harry," he said, recalling a battle at the end of the Korean War in 1953.

In the collection of vintage machine guns, the Sesslers easily could find two or three like the ones they used in combat plus dozens more from every war from World War I to the wars in Iraq and Afghanistan, and from just about every NATO country.

The Sesslers were there Monday to promote Nevada’s first nonprofit, military history museum, which they plan to build with Battlefield Vegas.

Warren Sessler, a recipient of the Silver Star who fought his way through a machine-gun battle on a slope near Songnae-dong, Korea, using three different weapons, has helped establish several other museums, including the U.S. Army Museum of Hawaii at Fort DeRussy on Waikiki Beach.

"Here we are the Battle Born State, and we don’t have a military history museum," he mused.

The Sesslers have just started planning but hope to file as a not-for-profit corporation in coming weeks. So far, they have no displays nor a timeline for building a place to put them.

For now, Battlefield Vegas will have to do.

"We want to have people be able to relive that experience,” said co-owner David Famiglietti, a multi-tour combat veteran. "We have vehicles outside, not just weapons. We want to give them the full experience with a little history lesson here and there."

"We wanted to do something different here in Vegas. We thought we could offer something Vegas-style extreme," Cheney said.

The cost of firing a machine gun starts at $59, but "it’s cheaper than that for children," Famiglietti said, noting there are machine gun mounts for 10-year-olds.

"With video games, they have a better understanding of machine guns than most of their parents. So that’s what we designed our range for, to allow them to have just as much fun as their parents," he said, stressing that, "It’s a very, very safe and controlled environment the way we do things."

"Everybody’s safety is our first priority here. Every shooter who has a machine gun has an RSO (range safety officer) with them. They don’t actually get the weapon hot in their hands until they’re in a shooting booth. There’s limited access, left, right, up, down, backwards. They can’t go anywhere."

Cheney’s answer to critics of machine-gun ranges is: "Our country was founded defending itself."

"These actual weapons here U.S. soldiers have used," he said, explaining that some of the weapons have been used to train soldiers in a foreign weapons course at Fort Polk, La.

"These weapons have been held by GIs and shot down-range before they go to Iraq and before they went to Afghanistan. This is American history here," he said.

Xiao Sessler, who was born and raised in China, joined the Army Reserve on the day she became a U.S. citizen in 2007.

"It’s important to have a museum here, to preserve military history, and it’s good education for the younger generation because the life we have here is great," she said.

"We should always know without those who sacrifice, we won’t have it. After you go to other countries, you will realize this is the best country in the world," Xiao Sessler said.