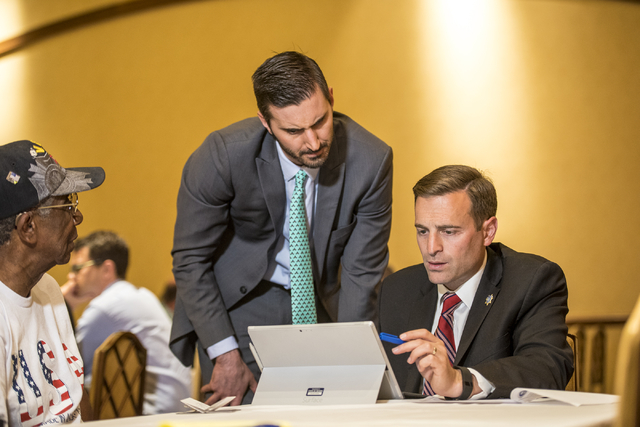 Adam Laxalt, Nevada attorney general, right, and Wes Duncan, first assistant attorney general, work with James Dorsey and Doris Haynes to assist them with their will during a military appreciation event at the Texas Station hotel-casino in Las Vegas on Monday, May 23, 2016. Joshua Dahl/Las Vegas Review-Journal 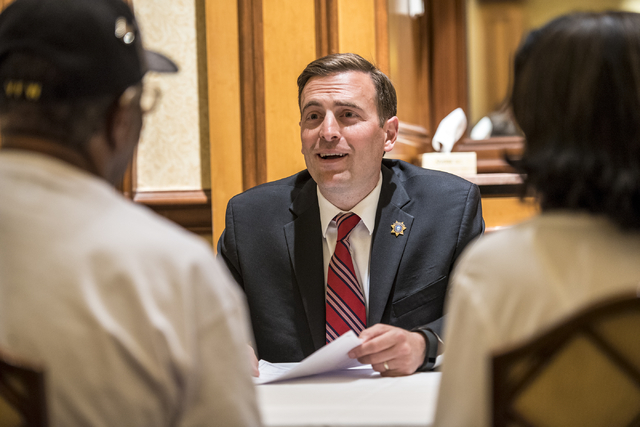 Adam Laxalt, Nevada attorney general, works with James Dorsey and Doris Haynes and assists them with their will during a military appreciation event at the Texas Station hotel-casino in Las Vegas on Monday, May 23, 2016. Joshua Dahl/Las Vegas Review-Journal 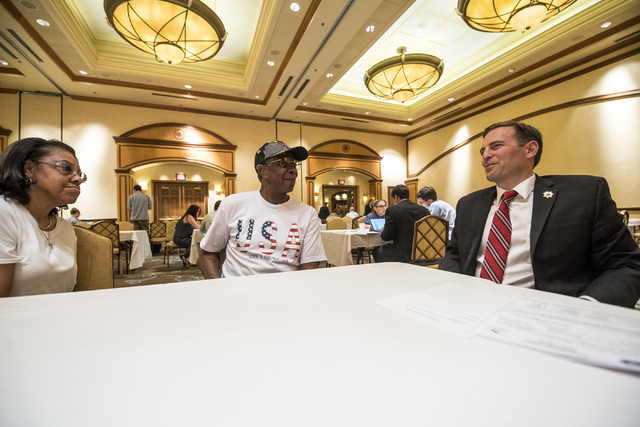 Adam Laxalt, Nevada attorney general, right, works with James Dorsey and Doris Haynes and assists them with their will during a military appreciation event at the Texas Station hotel-casino in Las Vegas on Monday, May 23, 2016. Joshua Dahl/Las Vegas Review-Journal 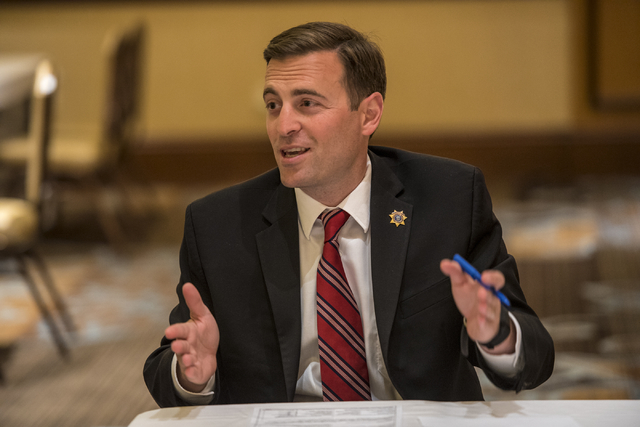 On Monday, James Dorsey sat with Nevada’s attorney general in a conference room, drafting up his will.

Laxalt said the program idea was on his platform when he ran for attorney general. Two weeks after being elected, he said he made calls, creating an advisory committee. In March, the Office of Military Legal Assistance was established.

“We’re a small enough state that if you’ve got the initiative and have a good idea, you can push something through in under a year,” he said.

Laxalt said he reached out to lawyers in private firms, asking them for 10 hours of pro bono service; they all said yes.

Wes Duncan, first assistant attorney general, said there’s a limit to the legal assistance that judge advocates general — judicial officers for the armed services — can provide to service members in the military.

He said the program helps bridge that gap by partnering active duty, reserve and veteran service members with local attorneys who help them file paperwork for civil matters, like drafting power of attorneys and will testaments.

“We’re able to step into that gap and provide a service to people who are serving us, or who have served us, in the past,” he said.

Duncan said the program is the first one by an attorney general’s office addressing the legal aid needs of military service members.

“It’s neat to see us kind of blazing the trail for other states,” he said.

Alan Gelon, an Army veteran, said he thought the program was a great benefit to veterans.

The 76-year-old Las Vegas resident, who met with an attorney to update information on his legal documents, said he plans on letting any service members he meets know about the program.

“Providing this service pro bono for veterans is a great way to say thank you to veterans,” Gelon said.

Doris Haynes, James Dorsey’s significant other, was with him through the process. The Las Vegas resident said she saw it as an opportunity for veterans to receive free legal aid.

“He had his done by the head honcho over there!” the 66-year-old said with a laugh as she gestured to Dorsey’s packet of legal documents. “That’s even better. This here is gonna be framed.”

Dorsey said he was glad he was able to get the paperwork done, which he said he got in preparation for a colonoscopy.

“This is hundreds of dollars on the outside, but this is one of the benefits you have of being a veteran,” he said, gesturing to his drafted will. “I think all veterans should take advantage of it.”

Monica C. Moazez, the attorney general’s acting communications director, said the next workshop will take place in Laughlin on June 3.