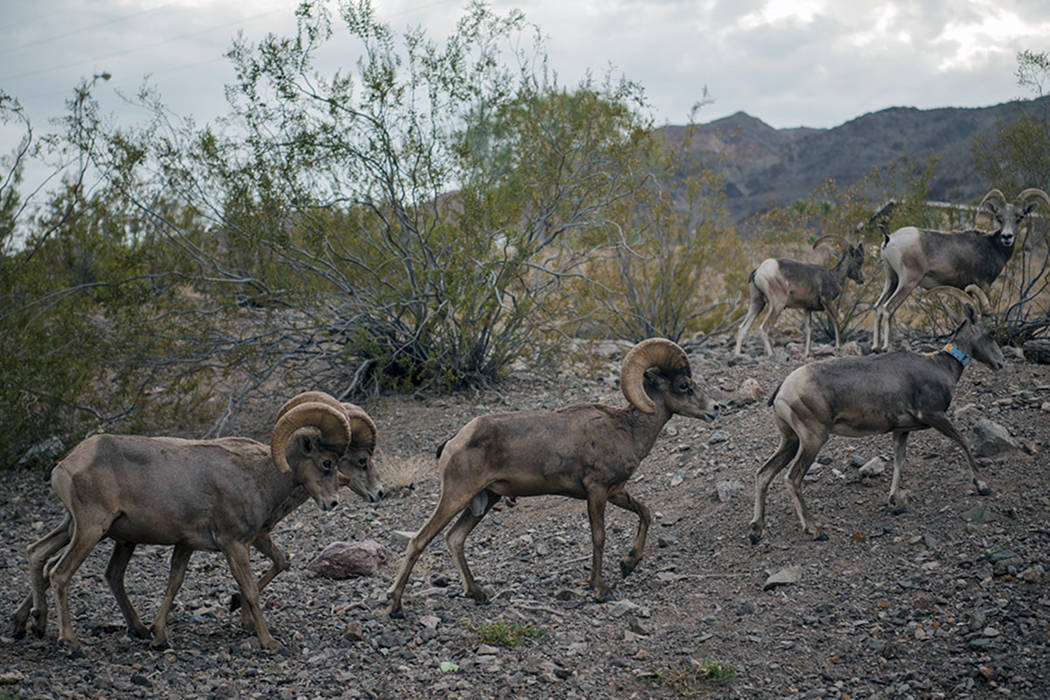 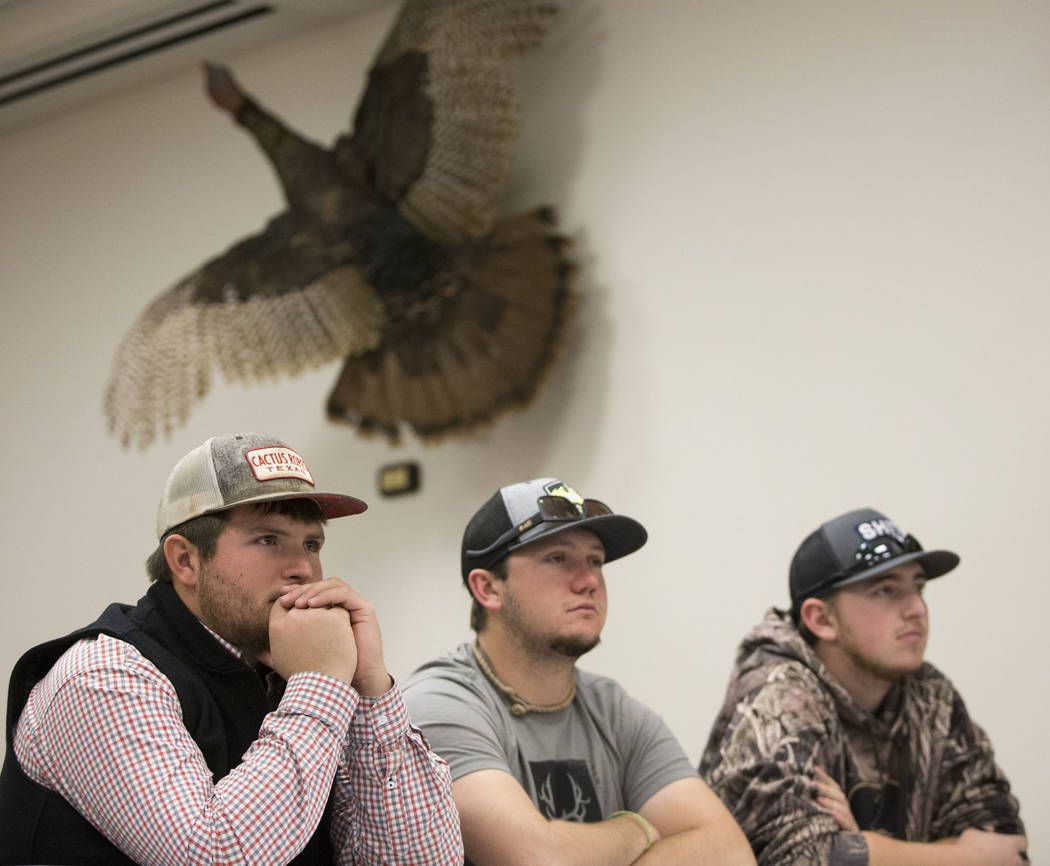 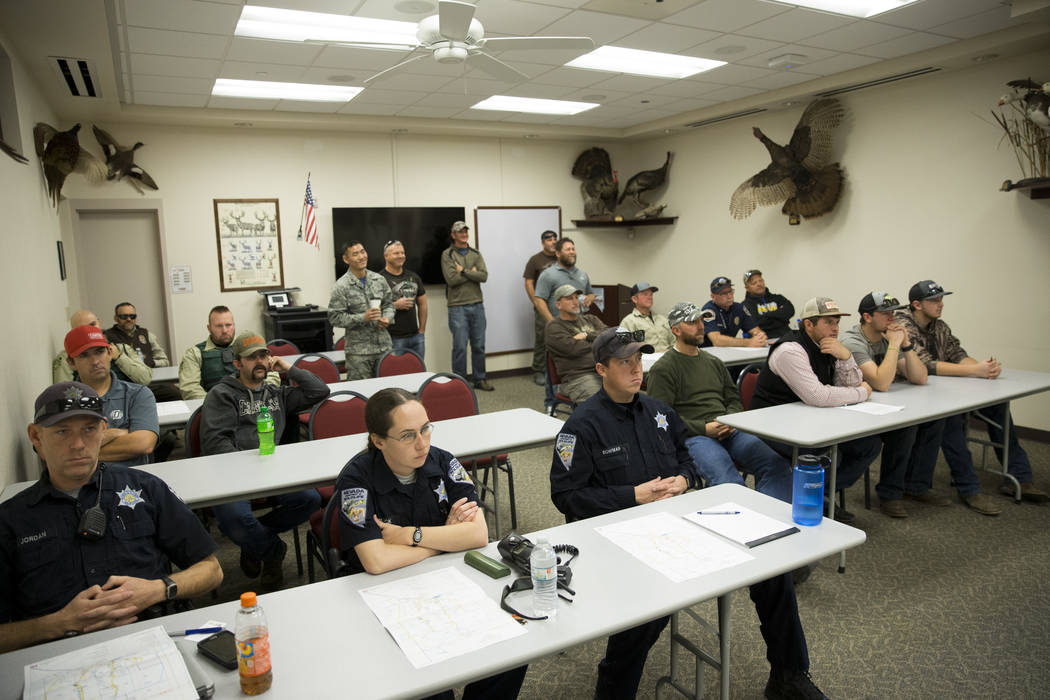 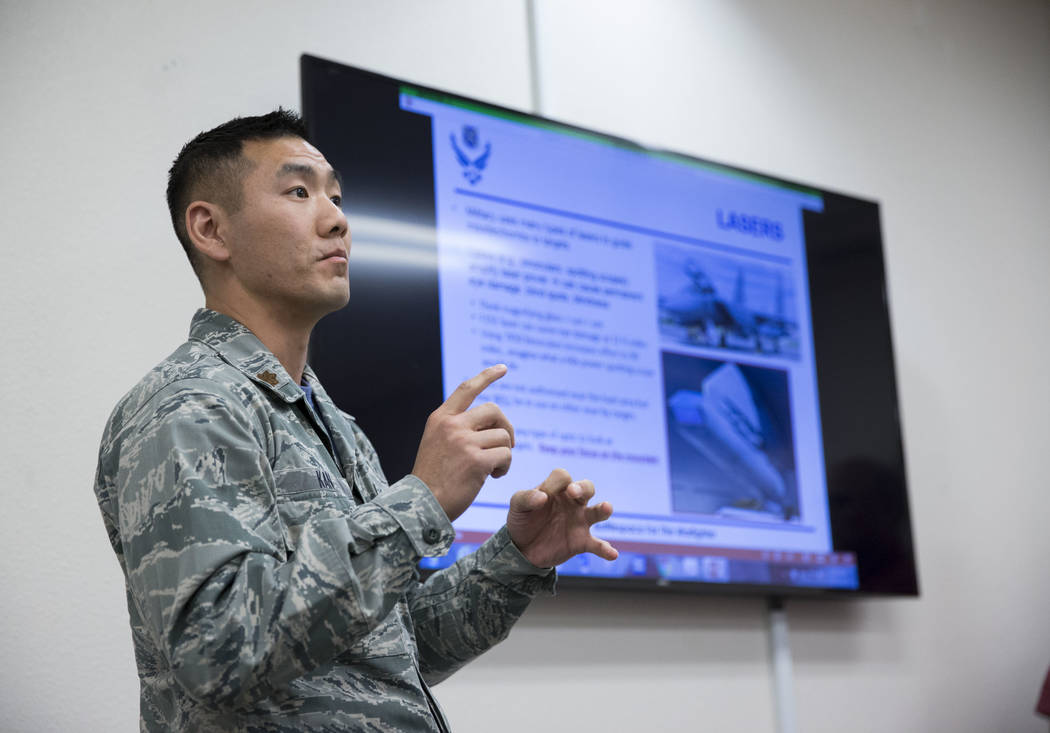 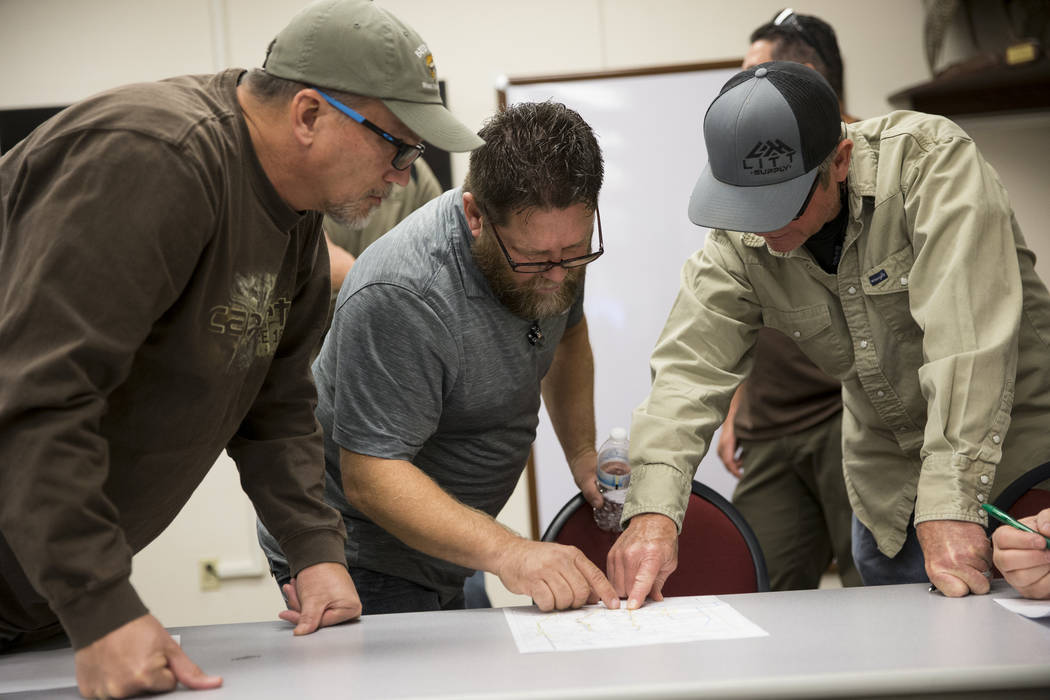 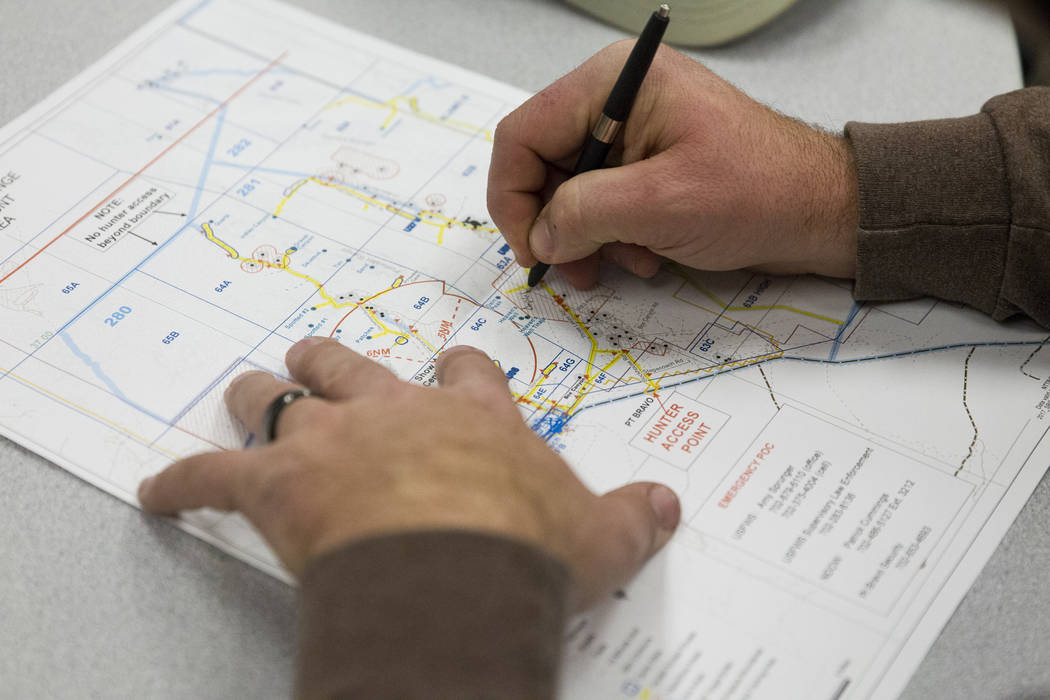 Patrick White of Reno makes a note in his map during an orientation at the Clark County Shooting Complex for hunters randomly picked for the annual bighorn sheep hunt inside the Nevada Test and Training Range, in Las Vegas, Friday, Dec. 15, 2017. Erik Verduzco Las Vegas Review-Journal @Erik_Verduzco 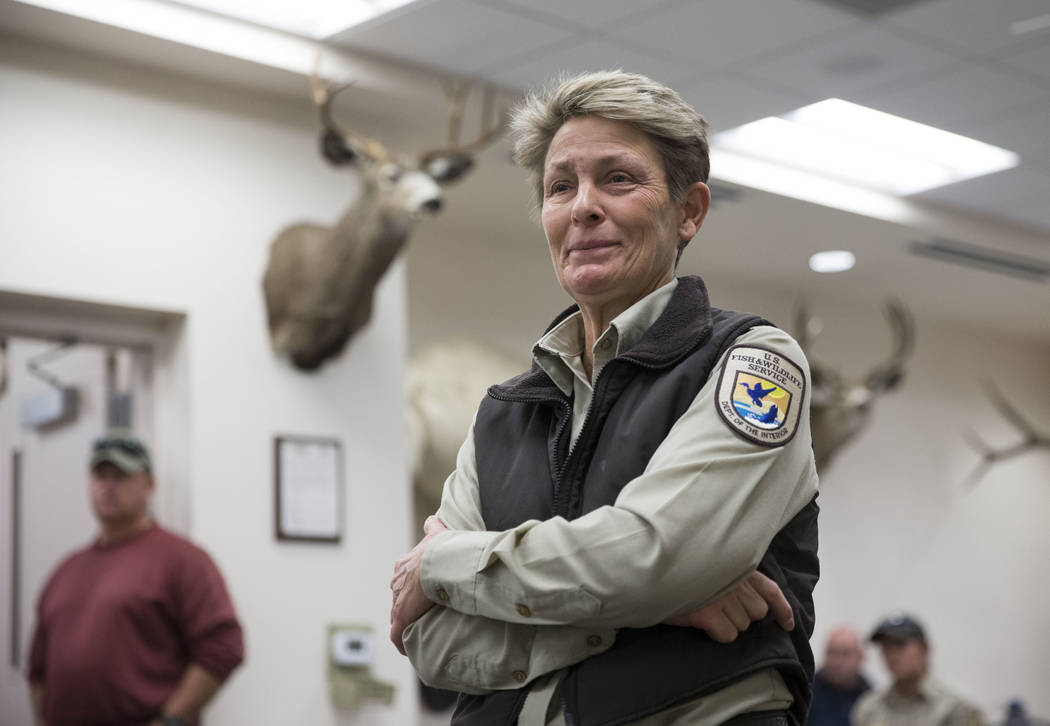 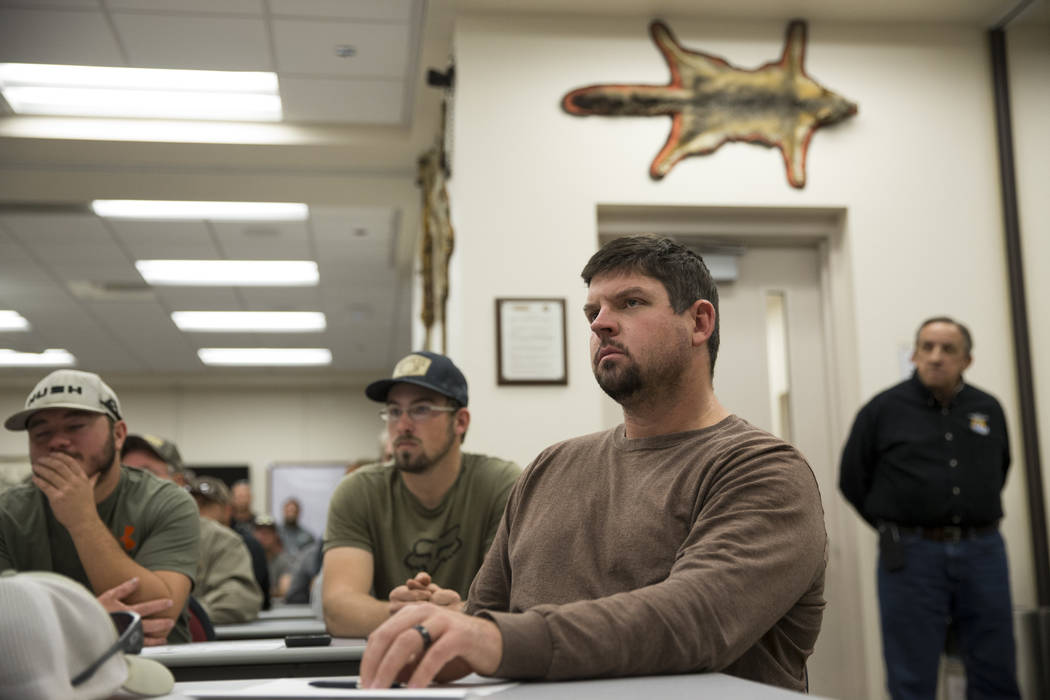 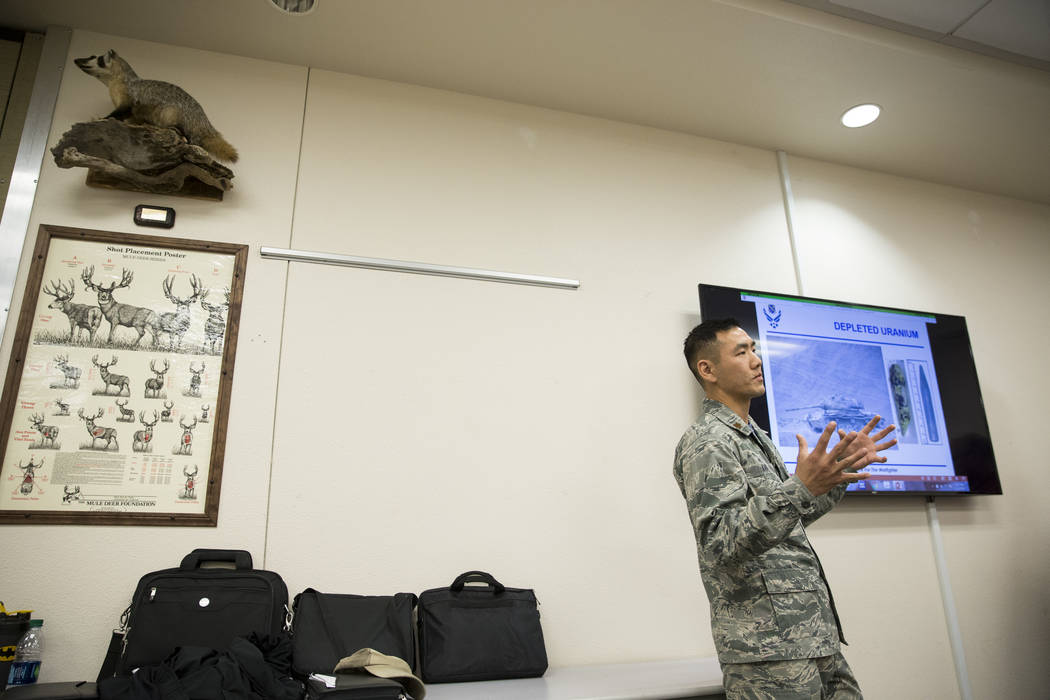 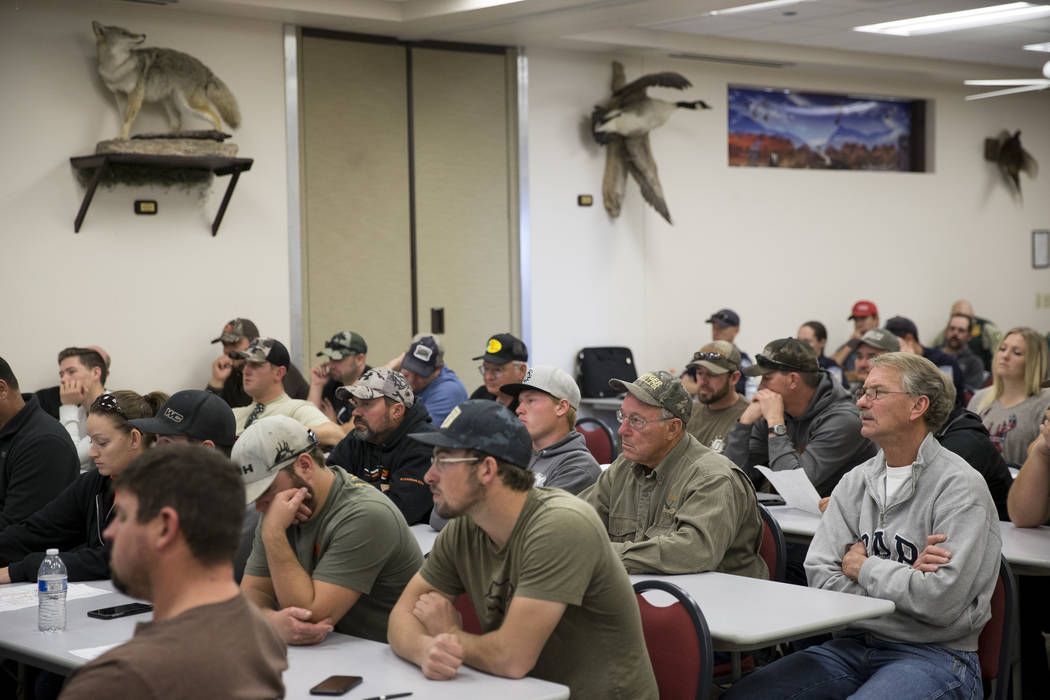 Armed civilians are running loose inside a secure military training area north of Las Vegas, but only the bighorn sheep have reason to worry.

One of the Silver State’s most unusual and exclusive hunts is now underway at the Nevada Test and Training Range, where 15 hunting tags have been issued in three mountain ranges normally off-limits to the public.

For most big-game hunts in Nevada, all you need to do is buy a hunting license and get drawn for a tag.

For the trophy ram hunt on the test and training range, hunters and their helpers must pass a criminal background check, submit a full inventory of their firearms, vehicles and optical equipment, and take part in a mandatory safety briefing so they don’t accidentally blow themselves up.

‘Once in a lifetime’

Nevada Department of Wildlife biologist Pat Cummings said hunting on a bombing range is a unique experience, but that’s not what attracts most hunters. For them, it’s all about the game.

Bighorn sheep tags are among the most competitive and hardest to get in Nevada. Thousands of hunters apply each year for the few hundred tags that are issued.

For many hunters, getting drawn for a bighorn is a “once-in-a-lifetime hunt opportunity,” Cummings said, so they’re more than happy to jump through a few hoops for the military.

“These hunters aren’t looking to be a problem,” he said. “Understandably, they’re a little intimidated by the process.”

Just in case, two state game wardens will patrol the test range during the hunt.

The bombing range has been opening its gates to hunters a few weeks a year for decades under an arrangement that dates back to the 1950s at least, said Maj. Christina Sukach, a public affairs officer at Nellis Air Force Base.

Part of the military’s mission is stewardship of the land withdrawn for its use, and the hunt is a way to highlight that stewardship, Sukach said.

Then there is this: The test and training range includes about 846,000 acres of the neighboring Desert National Wildlife Refuge, and though that land is closed to the public, it is co-managed by both the Air Force and the U.S. Fish and Wildlife Service.

Camped in a cluster-bomb field

He said preparing for the hunt requires several months of coordinated planning by officials from the Air Force, the Department of Wildlife, and the Fish and Wildlife Service.

As part of those preparations, military personnel swept the roads and designated campsites for unexploded ordnance, put up signs and blocked some side roads to keep hunters out of target areas where explosive material and other hazards are likeliest to be found.

Each hunting party is provided with a detailed map showing where it can and cannot go — distinctions that have more to do with safety than national security.

One of the hunt areas, for example, borders the Nevada National Security Site and includes a swath of land closed because of radioactive contamination.

A few years back, Cummings said, one hunt party failed to follow its map and “decided to set up their camp in a cluster-bomb field.”

Sukach said the Air Force has no record of any significant problems or injuries associated with the hunt.

A challenging place to hunt

It seems the biggest risk for hunters is coming up empty.

Statewide, bighorn sheep hunters fill their tags roughly 90 percent of the time, Cummings said, but the success rate on the test range tends to be “highly variable.”

“I don’t want to say it’s a marginal area, but it’s a more challenging area,” he said.

For one thing, the hunt on the range generally lasts about half as long as the bighorn season elsewhere in Nevada. And because the area is closed to the public the rest of the time, tag holders can’t do any pre-hunt scouting to get a feel for where the animals congregate.

Access to the mountains also can be difficult, Cummings said, because all-terrain vehicles are not permitted and “the only good roads are the main valley roads maintained by the Air Force.”

To help swing the odds back in their favor, some hunters bring along a crew of spotters to help them look for sheep.

Christensen said he has seen up to 20 people in a single hunting party, though everyone who goes on the range has to pass the same background check and only the tag holder is allowed to shoot.

Asked what kind of criminal history the military is on the lookout for, he said, “assault on a federal officer, that sort of thing.”

He could remember only two times when members of a hunting party were not granted access based on the background check.

“If they’re a felon, they’re excluded because they’re not going to be allowed around the firearms,” Christensen explained.

They have been warned

During Friday’s safety briefing, hunt participants learned how to recognize bomb debris and other potential hazards. They were also repeatedly warned by Christensen and others not to pick up anything while they’re on the range.

Christensen said he tends to be kind of a jerk when delivering that message, because he wants everyone to understand just how important it is.

“It’s only going to take one individual, one time, and this hunt is gone,” he said.

That one time nearly came several years ago, when a “kid” joined his father on the hunt and then wrote a story about it for his local newspaper in which he described all the cool souvenirs his dad picked up from the range.

Some military officials wanted to permanently close the range to hunting after that, but Christensen said he managed to convince them that it was an isolated case.

“I’ve always considered the sheep hunters to be a cut above the regular hunters because they work so hard and wait so long to get a tag,” he said.

Though the last few weeks of the year are usually pretty quiet at the range, Christensen said some military training will go on during the hunt. Just nothing that might endanger the Air Force’s guests.

“We actually do have activity above them. We’re just not dropping bombs or lazing (targets),” he said.

Christensen added that hunters could be treated to an impromptu air show by the Thunderbirds, which regularly practice in the skies north of Indian Springs.

He said some in the military would rather not open their busy bombing range to hunters every year, but he considers it a public service.

“My philosophy is: This has been working for a long time; as long as I can continue to make it work, I will do that,” Christensen said. “Hopefully, it continues.”