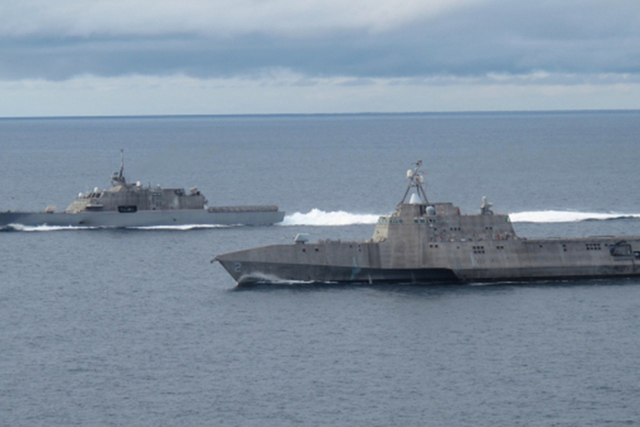 SAN DIEGO (May 2, 2012) The first of class littoral combat ships USS Freedom (LCS 1), left, and USS Independence (LCS 2), maneuver together during an exercise off the coast of Southern California. The Navy announced Thursday it would rename the modified Littoral Combat Ships it plans to build as frigates, given their enhanced capabilities. (U.S. Navy photo by Lt. Jan Shultis/Released)

WASHINGTON — U.S. Navy Secretary Ray Mabus on Thursday said the Navy would rename the modified Littoral Combat Ships it plans to build as frigates, given their enhanced capabilities.

“One of the requirements of the Small Surface Combatant Task Force was to have a ship with frigate-like capabilities. Well, if it’s like a frigate, why don’t we call it a frigate?” Mabus told the annual conference of the Surface Navy Association.

Mabus said the new designation would apply primarily to the next 20 such ships to be built but 32 LCS that have already been built or ordered would also be reclassified if and when they are retrofitted with additional weapons.

The Navy’s top civilian official told reporters after his speech that the change was not meant to deemphasize the importance of the smaller warships for operations in coastal areas but to bring their name in line with past Navy practices.

He said new designations would also be announced in coming weeks for several other Navy ships that had been given “strange acronyms,” including the Mobile Landing Platform, the Afloat Forward Staging Base, and the Joint High Speed Vessel.