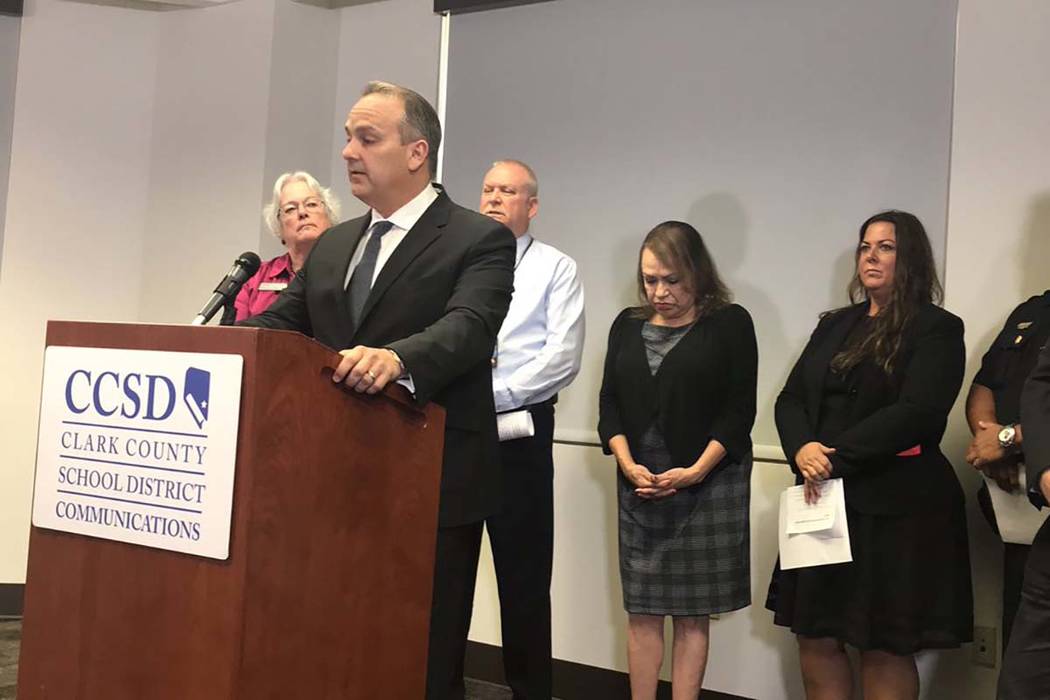 Clark County School District Superintendent Jesus Jara talks during a press conference about a fatal shooting at a high school and an alarming number of gun seizures on campuses this school year on Wednesday, Sept. 12, 2018. (Amelia Pak-Harvey/Las Vegas Review-Journal)

Not the challenge of balancing a checkbook — although that’s pertinent too — but of keeping students safe while also steering them away from prison.

This week brought the ninth occurrence involving a gun on or near school grounds during this school year.

The district had planned to hold a news conference on guns even before 18-year-old Dalvin Brown was shot and killed at Canyon Springs High School last week. I was planning to speak with officials even before a 9-year-old brought a gun to Helen Smith Elementary on Wednesday.

It’s getting hard to keep up with how quickly these events are happening.

Superintendent Jesus Jara has announced a school safety advisory committee to address the rash of guns on campus.

But at the same time, the district is hoping to reduce the flow of the school-to-prison pipeline with a new School Justice Partnership, which ultimately seeks to reduce the number of student referrals to the justice system.

How will the district balance giving students like Ryan Johnson a second chance at life out of prison while also protecting students like Faith Ancheta, who had to go into a hard lockdown the day her classmate was shot?

Ancheta, a 16-year-old Canyon Springs sophomore, was at tennis practice when she heard shots. She heard a voice over the intercom about 15 minutes later instructing students to come inside, she said.

After the school shooting in Parkland, Florida, Ancheta had already been fairly scared to go to school.

Johnson, an Eldorado High School graduate, had a long disciplinary record. He said he got in trouble with the law, got expelled and went to a behavioral school.

“I had a hard time keeping my anger down,” he said at the announcement of the partnership last month. “So anytime that somebody would try to say something to me, I would just retaliate and turn it into something that wasn’t good.”

He credits Eldorado staffers for helping him turn his life around and graduate.

District officials say the partnership is meant to be preventive.

“The School Justice Partnership is not about keeping dangerous and violent kids on campus,” said Assistant Superintendent Tammy Malich. “It’s about changing behavior of kids that haven’t escalated to that level.”

State law still requires the district to expel students for certain offenses, including bringing a gun to school. So that won’t change.

What they are hoping to change: the events that lead to a student choosing to bring a gun to school.

That means not charging students for minor criminal acts, such as possession of drug paraphernalia and damage to school property, and responding differently.

But does that mean giving more chances to students who may make greater mistakes later on?

Some of the seven students arrested in gun offenses so far this year had a discipline record, according to Malich, although the majority did not.

Balancing the two types of students will be a tightrope act. Here’s to hoping the district will make it across without falling.