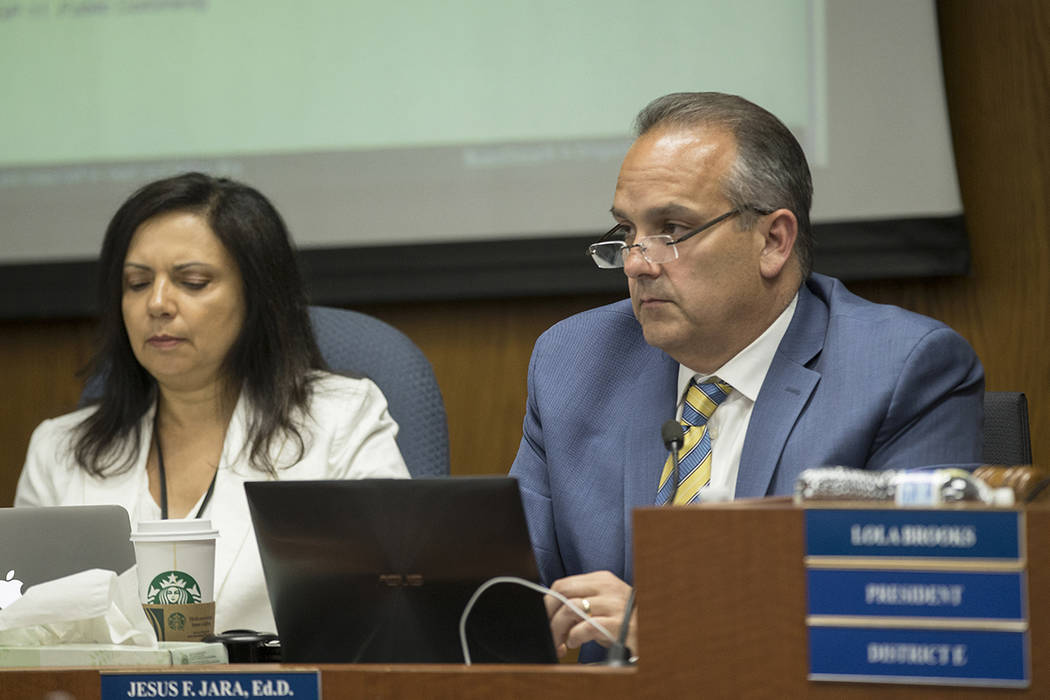 Clark County School Superintendent Dr. Jesus Jara, right, listens to public comments during a meeting with the Clark County School District Board of Trustees to discuss the planned termination of 170 deans in Clark County schools on Thursday, June 13, 2019, at the Edward A. Greer Education Center, in Las Vegas.(Benjamin Hager/Las Vegas Review-Journal) @benjaminhphoto 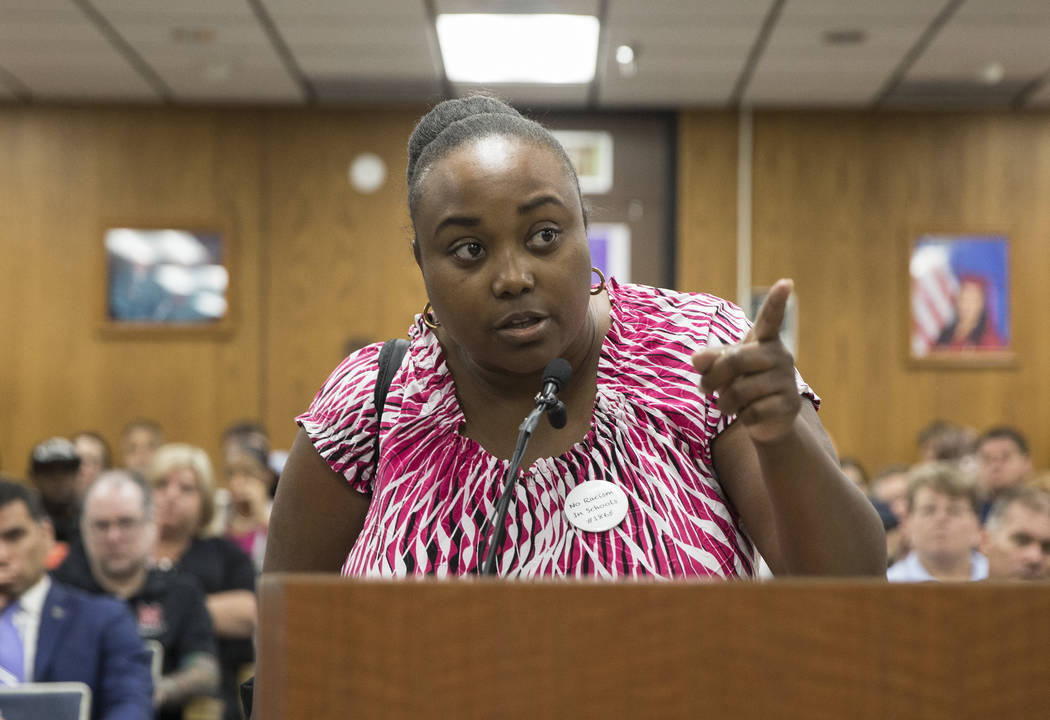 Jshauntae Marshall demands accountability from the Clark County School District Board of Trustees during a meeting to discuss the planned termination of 170 deans in Clark County schools on Thursday, June 13, 2019, at the Edward A. Greer Education Center, in Las Vegas.(Benjamin Hager/Las Vegas Review-Journal) @benjaminhphoto 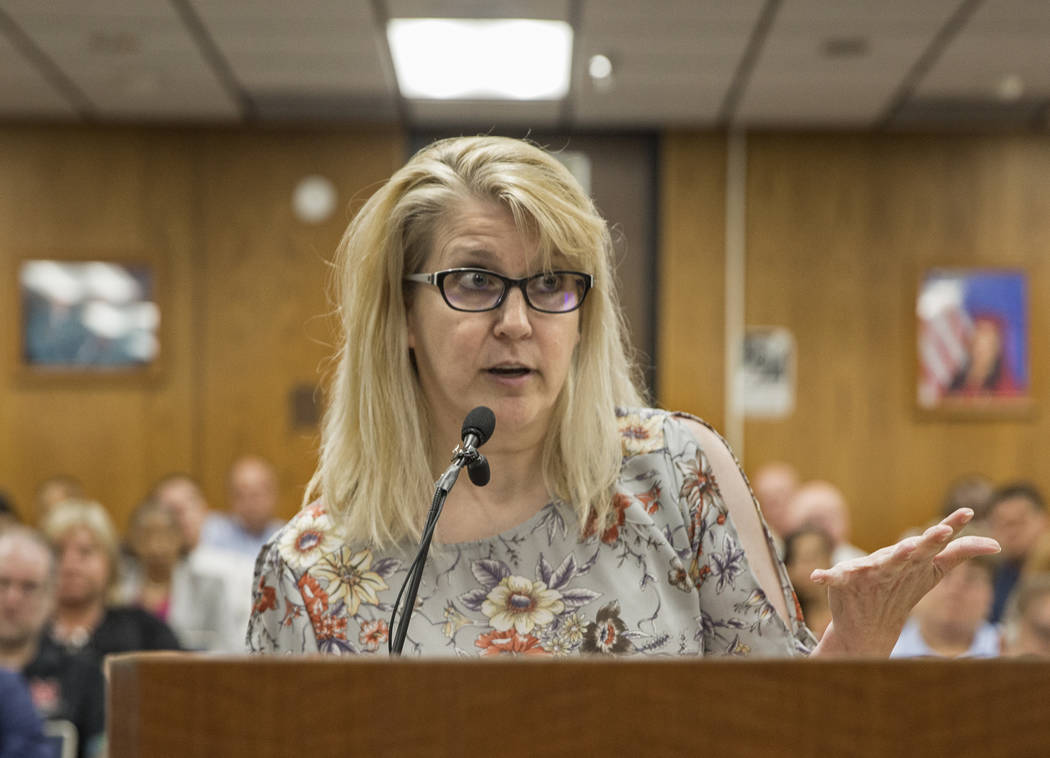 Amy Richmond, a parent and teacher at Palo Verde High School, addresses the Clark County School District Board of Trustees during a meeting to discuss the planned termination of 170 deans in Clark County schools on Thursday, June 13, 2019, at the Edward A. Greer Education Center, in Las Vegas.(Benjamin Hager/Las Vegas Review-Journal) @benjaminhphoto 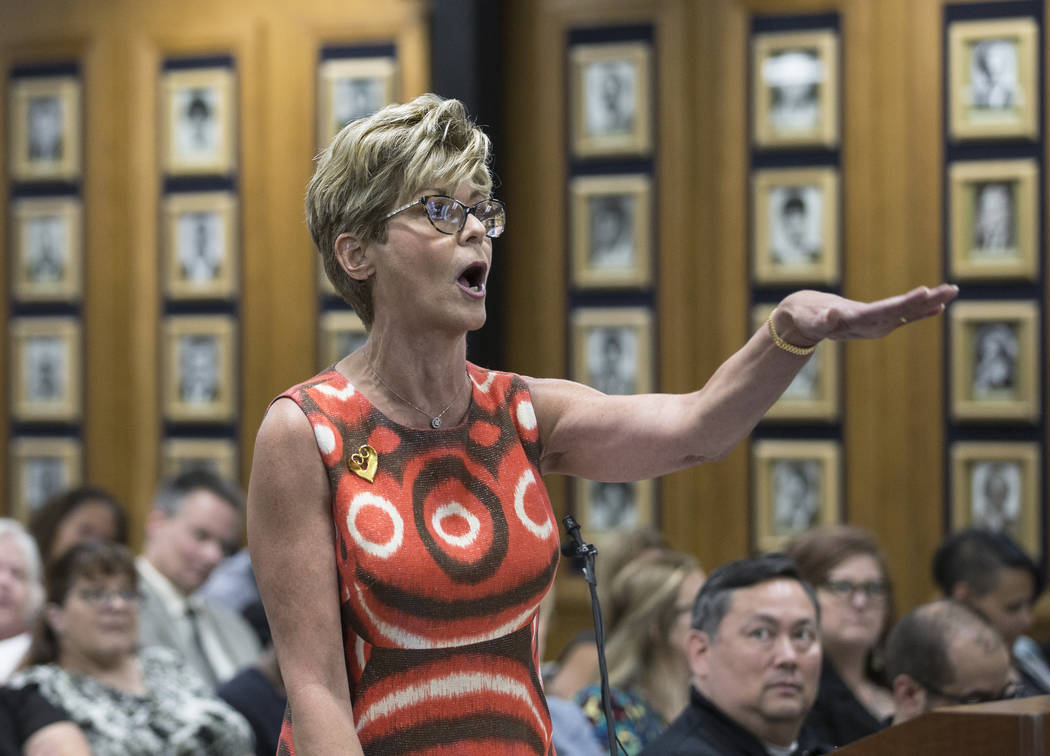 Deborah Whitt, an english teacher at Spring Valley High School, demands more time to speak with the Clark County School District Board of Trustees during a meeting to discuss the planned termination of 170 deans in Clark County schools on Thursday, June 13, 2019, at the Edward A. Greer Education Center, in Las Vegas.(Benjamin Hager/Las Vegas Review-Journal) @benjaminhphoto 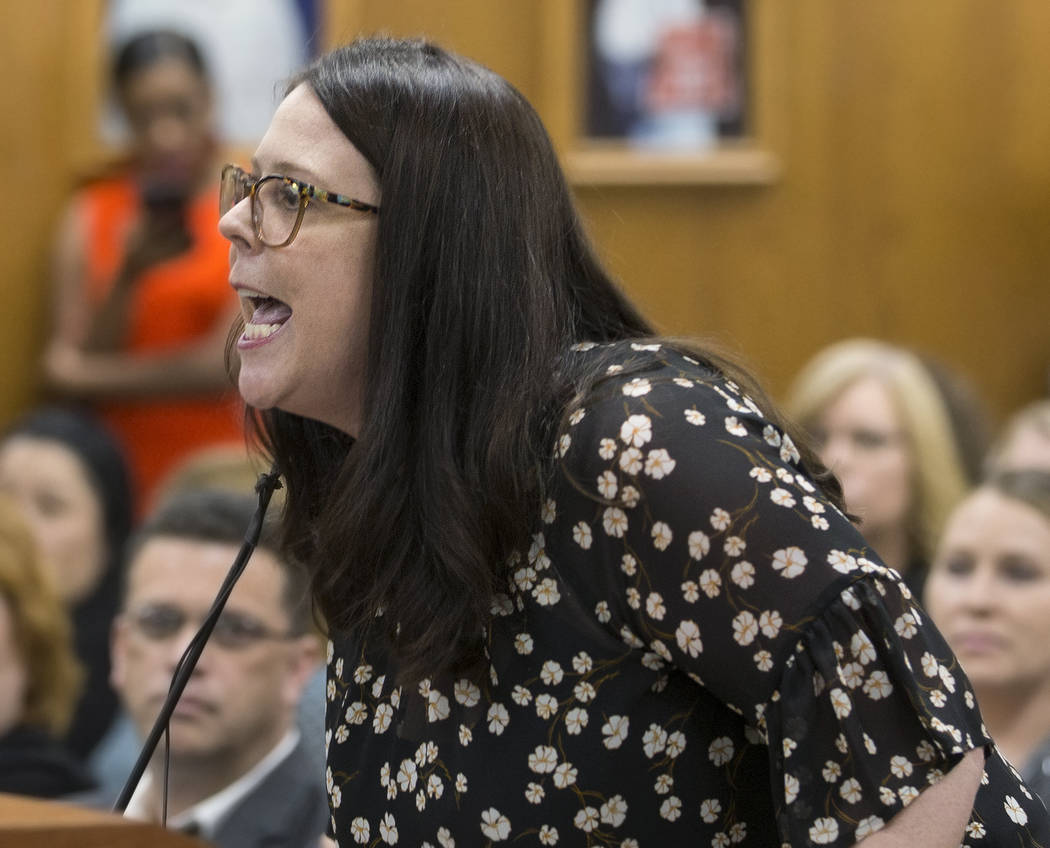 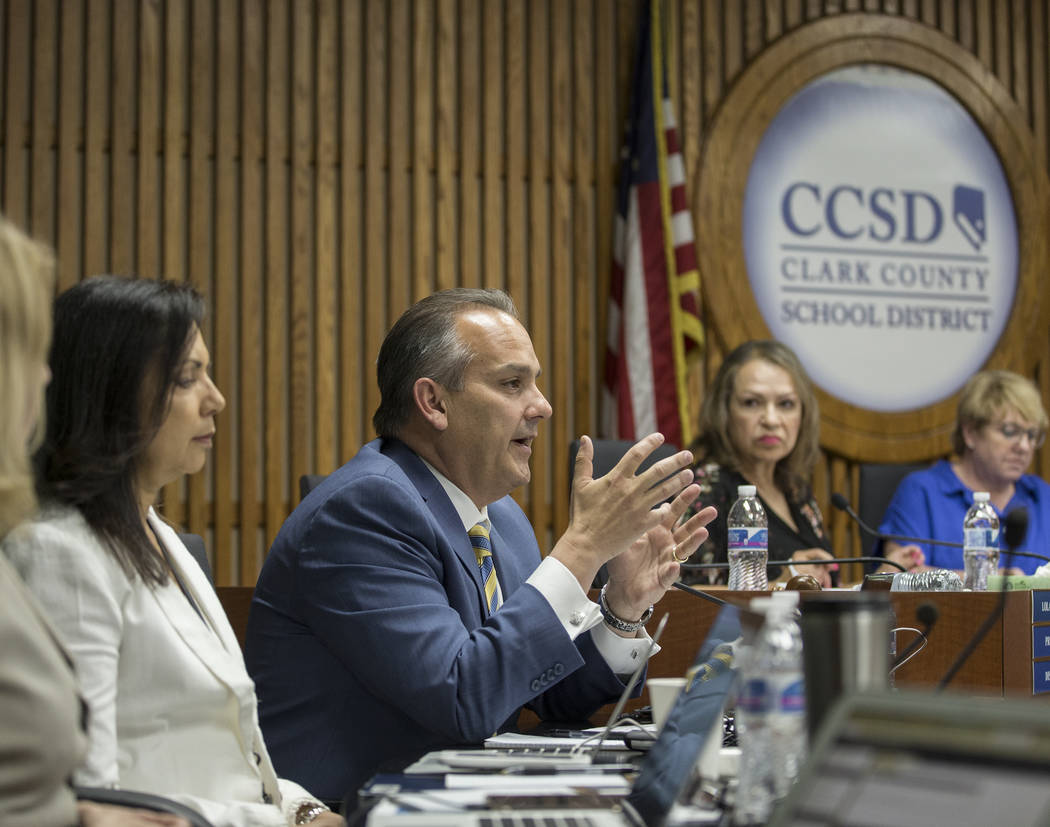 Clark County School Superintendent Dr. Jesus Jara, third from left, addresses the Clark County School District Board of Trustees and attendees during a meeting to discuss the planned termination of 170 deans in Clark County schools on Thursday, June 13, 2019, at the Edward A. Greer Education Center, in Las Vegas.(Benjamin Hager/Las Vegas Review-Journal) @benjaminhphoto

The Clark County School Board meeting room felt more like a sinking ship on Thursday.

When the budget cuts hit and the ship goes down, who can scramble onto a lifeboat for safety? Who will be left on board? Who will shove others out of the way to save their own life?

This time, the deans were the victims, with all 170 of them losing their jobs to erase a $17 million deficit. After they stood up in unison to protest, I could see them standing on the hull of a capsized vessel, looking forlornly back at the other employees — teachers, support staff — who survived. For now, at least.

The most gut-wrenching part, though, was that the whole thing felt like deja vu.

In just under three years here, I’ve witnessed three sinking ships. Three budget crises. And countless long meetings where emotions ran high, employees bemoaned lost jobs and, along with parents, tried to argue that these employees or these programs were too important to lose. In other words, you’re harming our children.

Yet this has been going on long before my time here.

Foothill High School senior Madison Flick had been through it before, too — eight years ago, as a fourth-grader.

“It’s almost nostalgic coming back to speak to the School Board,” she said Thursday night. “But what makes it frustrating, however, is that I am addressing the School Board of the exact same thing that I addressed almost eight years ago — I’m here to talk about teachers and finances. See, the faces may have changed, but the issues haven’t.”

And that’s the thing. The cycle continues.

Despite Gov. Brian Sandoval’s administration pumping more money into education and the just concluded legislative session, which did the same.

The reality is, when you’re chronically underfunding schools, adding incremental amounts of money every two years isn’t going to change anything. One 2018 study commissioned by the Legislature said Nevada’s education funding is 58 percent of adequate.

Applied Analysis, the firm that’s helped created the new education funding formula passed by the Legislature, says we would need over $1 billion in additional funding annually to be able to reach adequacy.

And as the state continually fails to do that, I’ve watched the effects take a human shape.

I saw it when at-risk students at Burk Horizon High School, which was on the chopping block two deficits ago, pleaded with board members to save their program.

I’ve seen it in the support staff who are used to being annihilated during deficits, and as a result now have an impossibly low morale.

Now it’s the teachers and parents, who fear that their children won’t be safe without deans to temper the escalating violence in Clark County schools.

In the words of Tony Gebbia of Spring Valley High School, the district has gotten “pretty good at choosing the least horrible option from a list of exclusively horrible options” when deciding where to cut.

Is there waste in the Clark County School District? No doubt. Were some of these deficits the result of poor planning? Probably. Will new safety funding for social workers and police officers replace the loss of deans? Perhaps.

Yet these ships will continue to sink so long as funding’s an issue — or an excuse.

Sadly, I see a lot of shipwrecks in the future. I suspect it’s only a matter of time until I find myself sitting in the board room and watching it all unfold again.