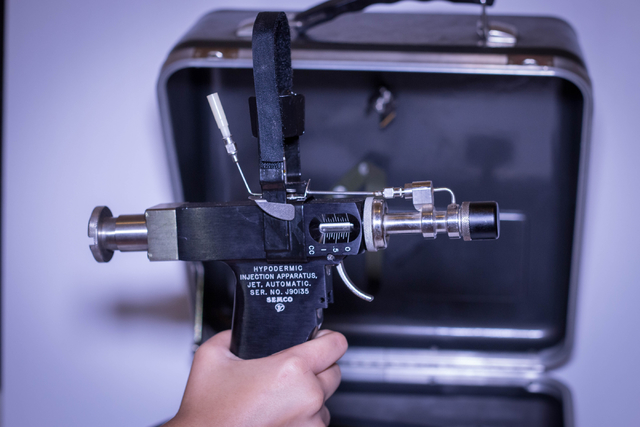 Seen is the kind of "jet gun" that some Vietnam veterans and medical experts say caused them to contract hepatitis C. (Silvia Hinojosa-Price)

That the federal Centers for Disease Control and Prevention (CDC) has launched such a campaign makes sense — adults born between 1945 and 1965 are five times more likely to have been exposed to the hepatitis C virus than other generations.

A stealth virus, it can live in an individual for years without symptoms. When finally diagnosed, the disease may be so far along a patient has severe liver damage, cirrhosis and even liver cancer — and no treatment can help.

So given treatments today are available that can cure the disease, testing becomes critical. Millions may have the disease — the estimate is more than 3 million — and not know it.

One reason, says Dr. Alireza Farabi, an infectious disease specialist with the UMC Wellness Center, is simple: Many boomers are believed to have become infected before screenings of donated blood and organs became available in 1992.

After that explanation, however, the official answer to the question of why so many boomers have become infected has shrouded hepatitis C with a negative stigma.

For years the CDC has pushed use of injection drugs as a dominant route of transmission among boomers, which may have had unintended consequences.

The negative junkie stigma, notes Las Vegas internist Dr. Ivan Goldsmith, made doctors reluctant to test many middle-aged boomers for the disease when complaining of fatigue, which is associated with the disease.

He said doctors often have a reluctance to probe people well on past drug use and instead treat their patients for “Yuppie Flu” or chronic fatigue syndrome.

While agreeing sharing needles during drug use can transmit the virus, Canadian researchers believe boomers didn’t participate heavily in the illegal practice.

A 2016 Canada-based retrospective study debunks the heavy drug use theory, suggesting boomers were around 5 years of age during a peak period of virus spread around 1950.

The researchers argued unsafe medical procedures were behind the spread — in addition to unscreened blood transfusions, incomplete sterilization techniques were then used, particularly by doctors who gave injections in poorly sterilized glass and metal syringes that were re-used.

Other researchers today argue use of jet gun vaccinations on nearly 10 million Vietnam-era veterans between 1964 and 1975 resulted in transmission of the virus. More than 1 in 10 Vietnam veterans are estimated to have the virus.

Powerful air pressure from the jet gun forced a tiny stream of medication through the skin of recruits without a needle. Because the shot hurt, many recruits flinched, causing many to bleed.

The blood blew back on the jetgun. Then the medic injected the next recruit without cleaning the gun.

According to Dr. Thomas Berger, of Vietnam Veterans of America, there is no doubt the federal government should label jet gun vaccinations as a risk factor for the disease. He said it is only because the government doesn’t want to pay disability compenation to veterans that it isn’t recognized as a risk factor.

While it’s possible the government’s position on transmission of the disease among boomers may have resulted in less testing, it’s critical today boomers forget any fears of stigma and get the easy blood test.

The lives we save may be our own.