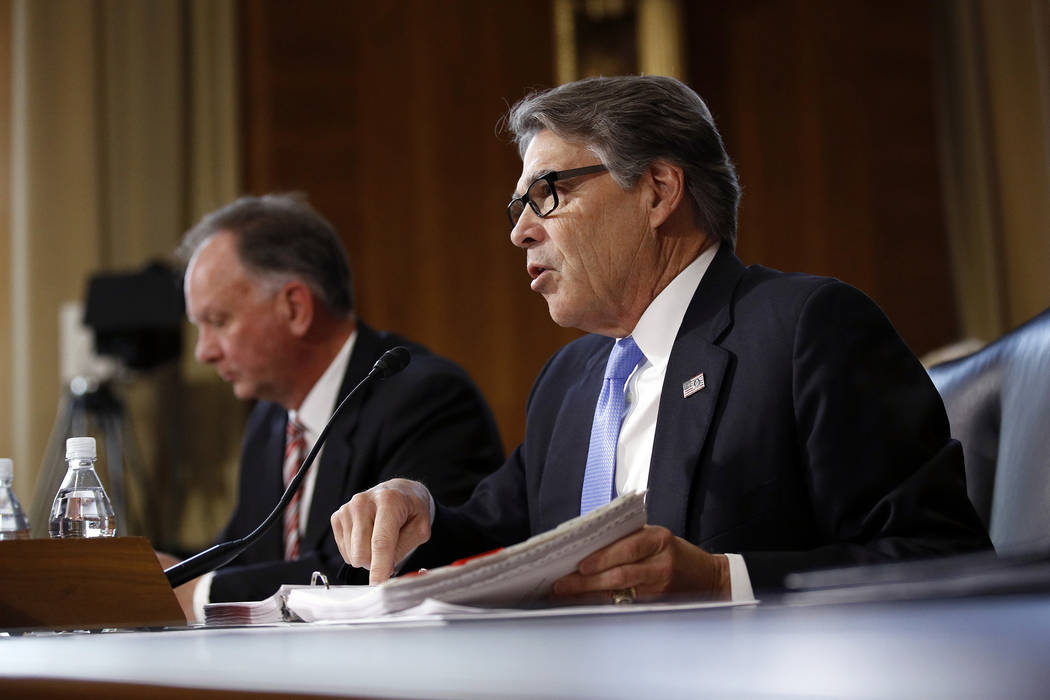 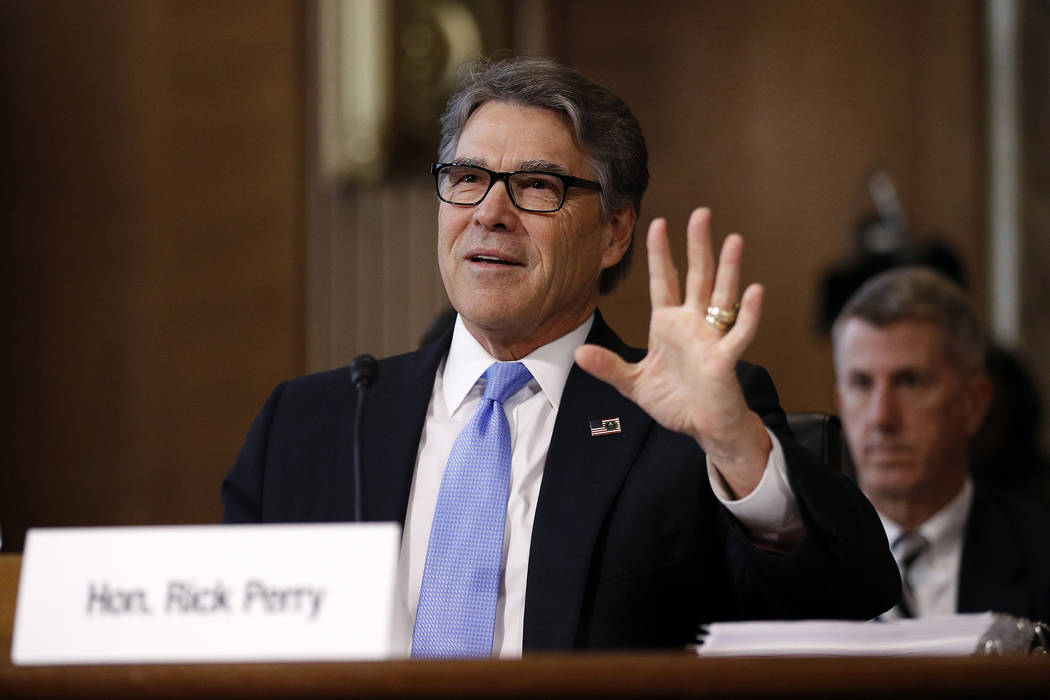 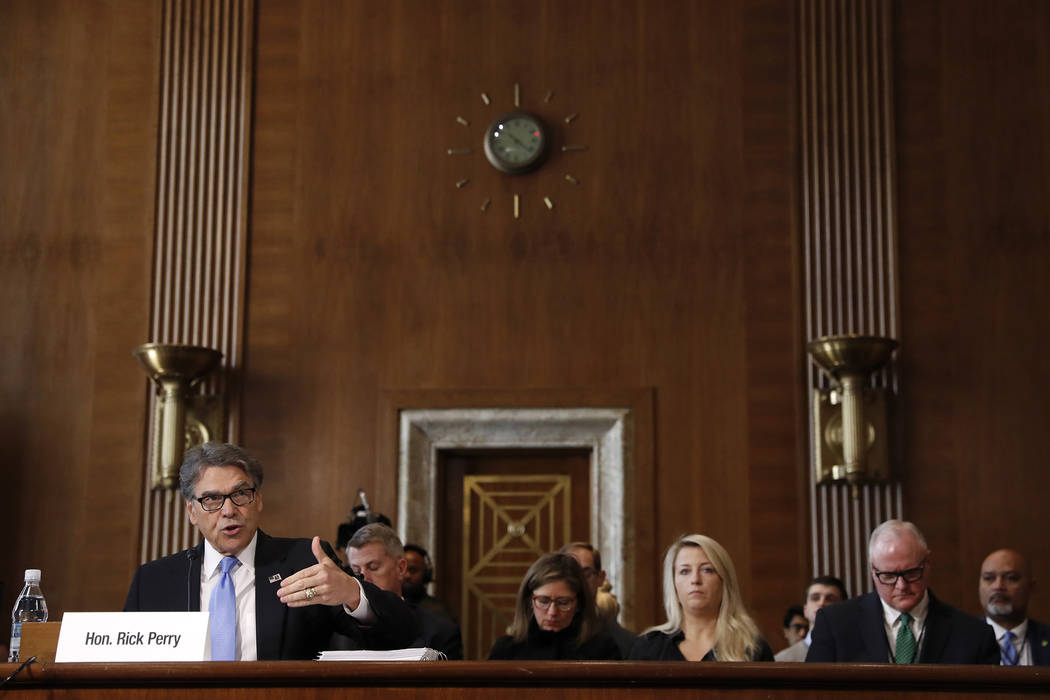 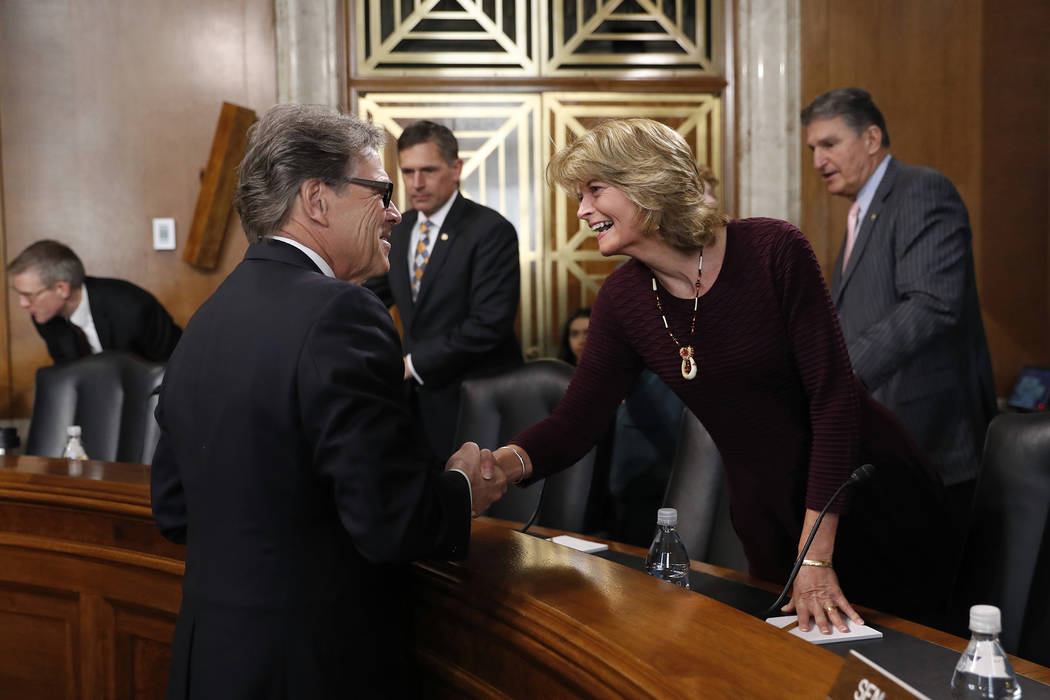 Energy Secretary Rick Perry, left, speaks with Sen. Lisa Murkowski, R-Alaska, chairwoman of the Senate Energy and Natural Resources Committee, before testifying before the committee at a hearing on the President's budget request for Fiscal Year 2020, Tuesday, April 2, 2019, on Capitol Hill in Washington. (AP Photo/Patrick Semansky)

WASHINGTON — Energy Secretary Rick Perry acknowledged Tuesday that the Nevada National Security Site — where weapons-grade plutonium is being stored — and the proposed Yucca Mountain nuclear waste repository are located in an area considered a seismic hazard.

But he insisted that the facility where the half metric ton of plutonium is being held is secure and that Yucca Mountain would be a safe site to store waste.

Perry vowed to take a report from an independent safety board about the earthquake hazards into account as the department examines safety at the security site, as well as with the license application for Yucca Mountain.

“You don’t have to tell me that,” Cortez Masto shot back, noting she had friends and family who had worked at the facility. “I grew up in Las Vegas.”

The hearing was held to examine the Energy Department’s proposed $31.7 billion budget for fiscal year 2020, which starts Oct. 1.

The budget includes $116 million to jump-start licensing hearings required for a construction permit to build Yucca Mountain, a project opposed by Gov. Steve Sisolak and Democrats in the state’s congressional delegation.

State leaders are also concerned about the plutonium that was secretly transferred into the state last year, as Nevada prepared a lawsuit to stop the shipment. It’s being stored at the Device Assembly Facility, a collection of 30 steel-reinforced, concrete buildings.

Cortez Masto raised concerns by the Air Force and other entities about the safety of storing plutonium at the facility and opening a nuclear waste repository in a region with current seismic activity.

Cortez Masto grilled Perry on a report first revealed by the Review-Journal in which the Defense Nuclear Facilities Safety Board outlined risks to workers and the “offsite public” because of seismic hazards to structures at the Device Assembly Facility at the security site, located about 90 miles north of Las Vegas.

“This facility continues to operate without accounting for the increase in seismic hazard and without evaluating whether the credited structures, systems and components can perform their safety function during and after a seismic event,” wrote Bruce Hamilton, chairman of the Defense Nuclear Facilities Safety Board, in the board’s report.

The board noted that concerns about seismic hazards at the Device Assembly Facility in Nevada were first raised in 2007.

Cortez Masto raised the most recent U.S. Geological Survey report, issued in 2008, which lists the area that includes the Nevada security site and nearby Yucca Mountain as one of moderate to high seismic hazard.

Two faults, the Northern Death Valley and the Black Mountains, are located west of the Nevada security site and the proposed nuclear waste storage facility. According to the USGS, one of the strongest recent earthquakes in the state occurred on June 29, 1992, at Little Skull Mountain in the southwest portion of the Nevada security site and about 12 miles east of Yucca Mountain. That earthquake registered magnitude 5.6.

The safety board report noted that the Device Assembly Facility has “high explosives co-located with special nuclear material.”

Cortez Masto said the seismic hazards cited in the report should also be taken into account in the administration’s attempt to restart license hearings on the Energy Department’s application for Yucca Mountain.

Sisolak agreed with Cortez Masto in a statement.

“As the Defense Nuclear Facilities Board — a federal safety board — pointed out recently, earthquake risks make the Nevada National Security Site unsuitable for plutonium and make Yucca Mountain unsuitable for nuclear waste,” he said.

Cortez Masto also asked Perry about President Donald Trump’s flip-flop on Yucca Mountain during a campaign event in Nevada last year, where he said he agreed that a nuclear waste dump should not be located in the state if the residents don’t want it.

Cortez Masto replied that the Obama administration had taken a different approach, preferring a consent-based plan to store nuclear waste in an area where residents didn’t oppose it.

And she told the secretary the 1987 law that focused only on Yucca Mountain to store waste was a decision that “shows extreme political influence was used to scapegoat the state of Nevada.”

“All I am asking is for some reasonable people to come to the table to address this issue and recognize that scientifically this is not safe for Nevada,” Cortez Masto said. 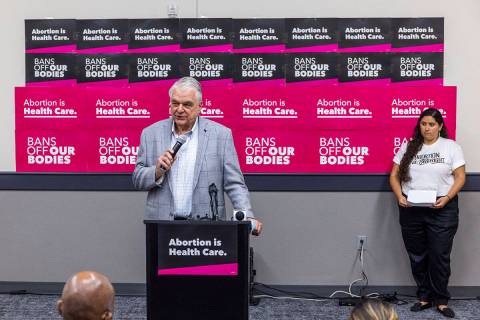 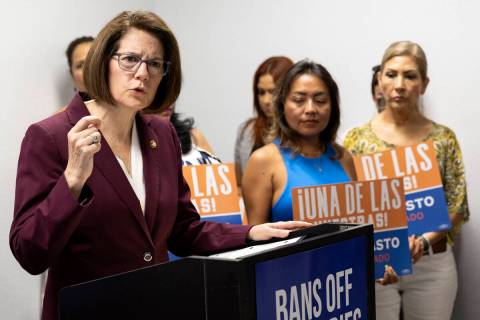