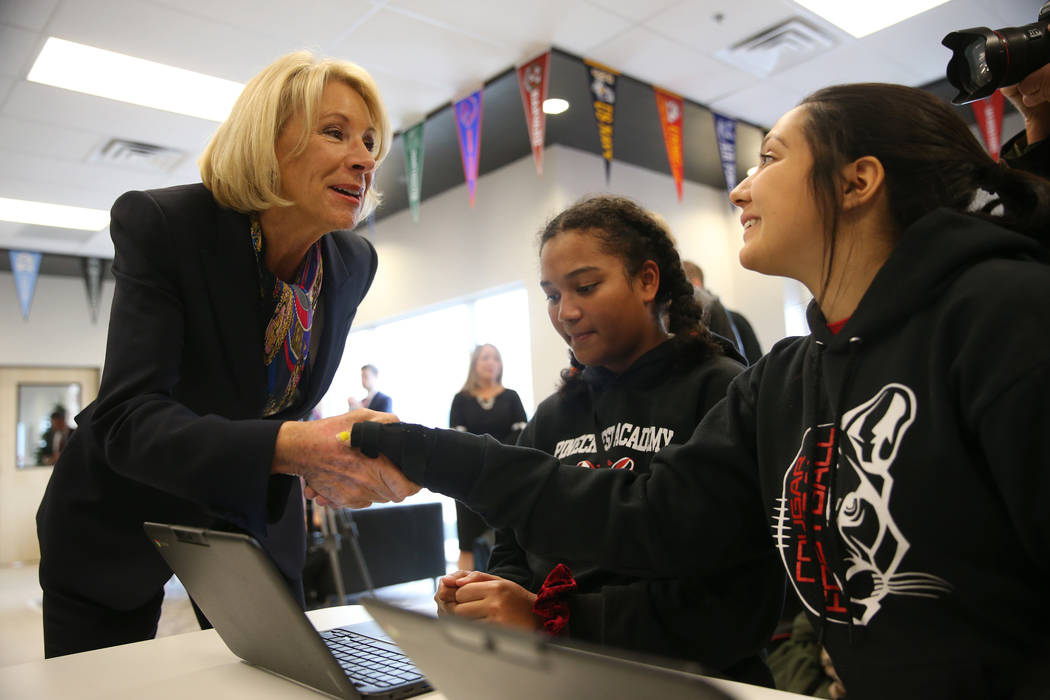 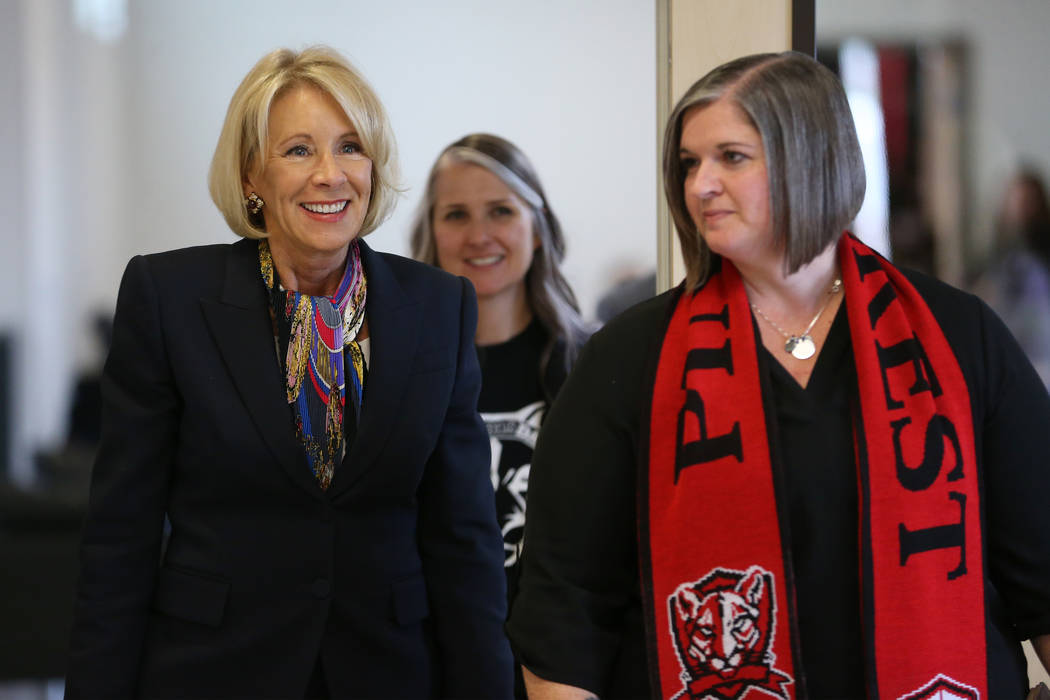 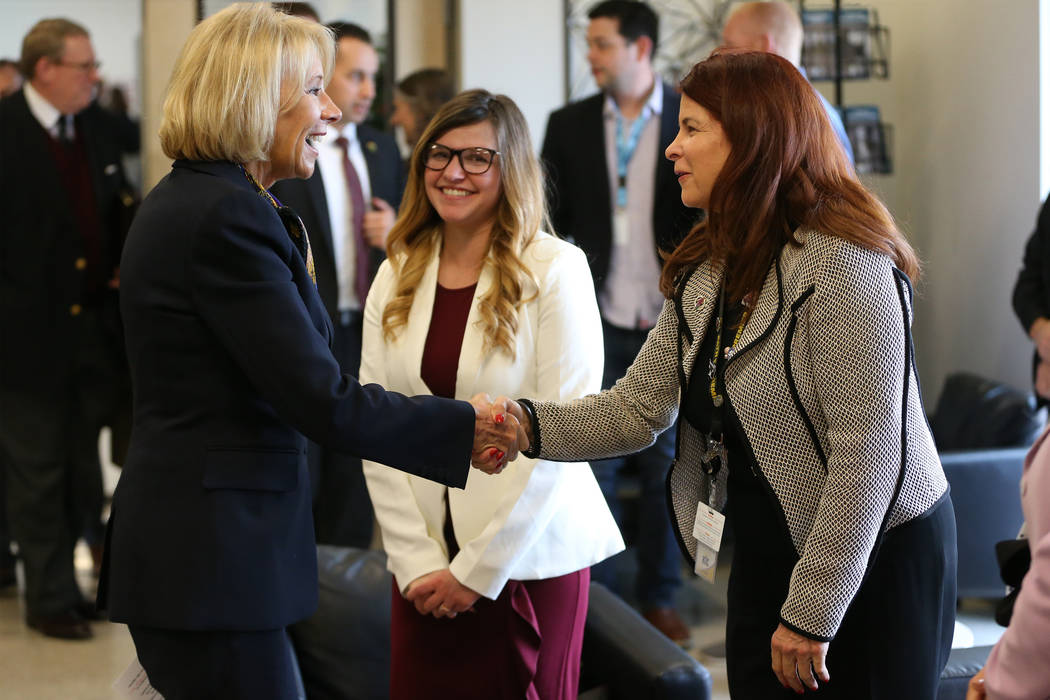 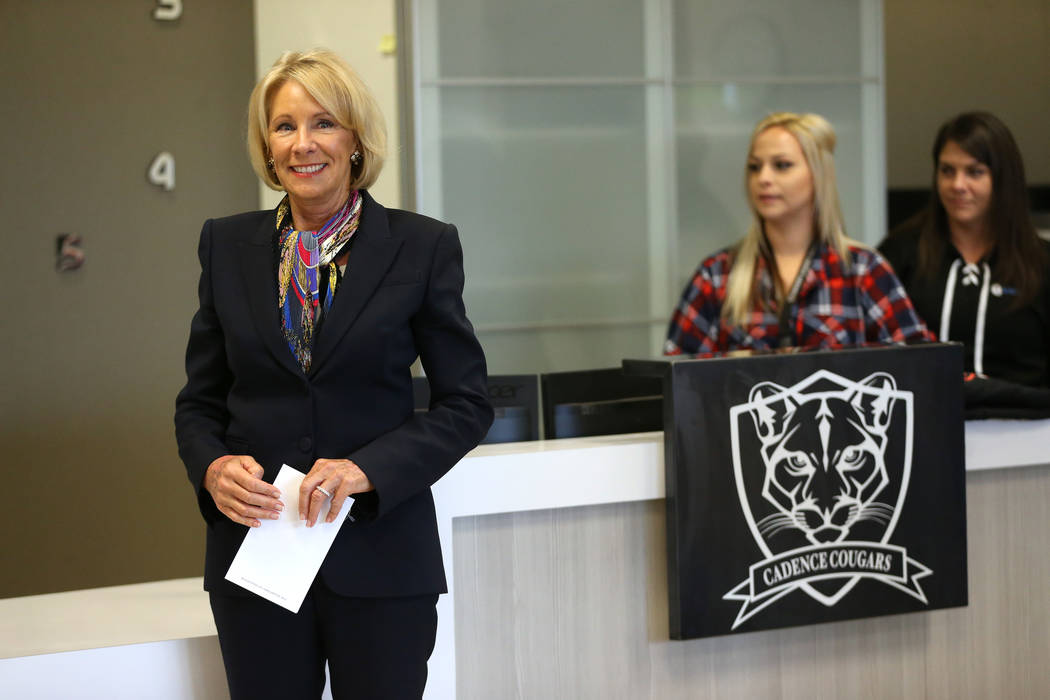 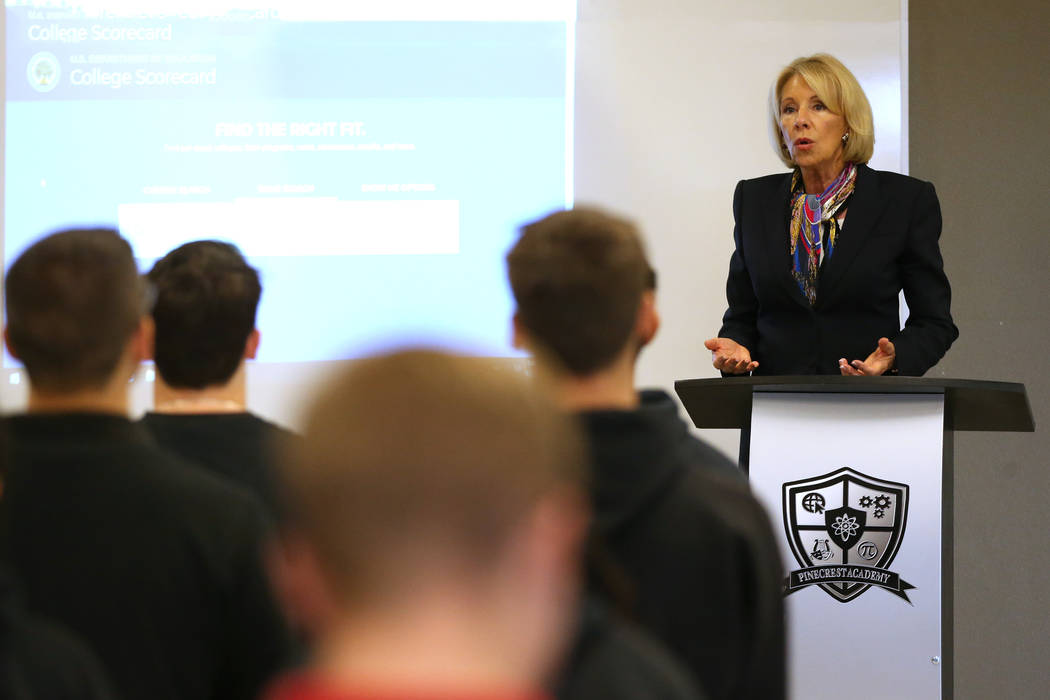 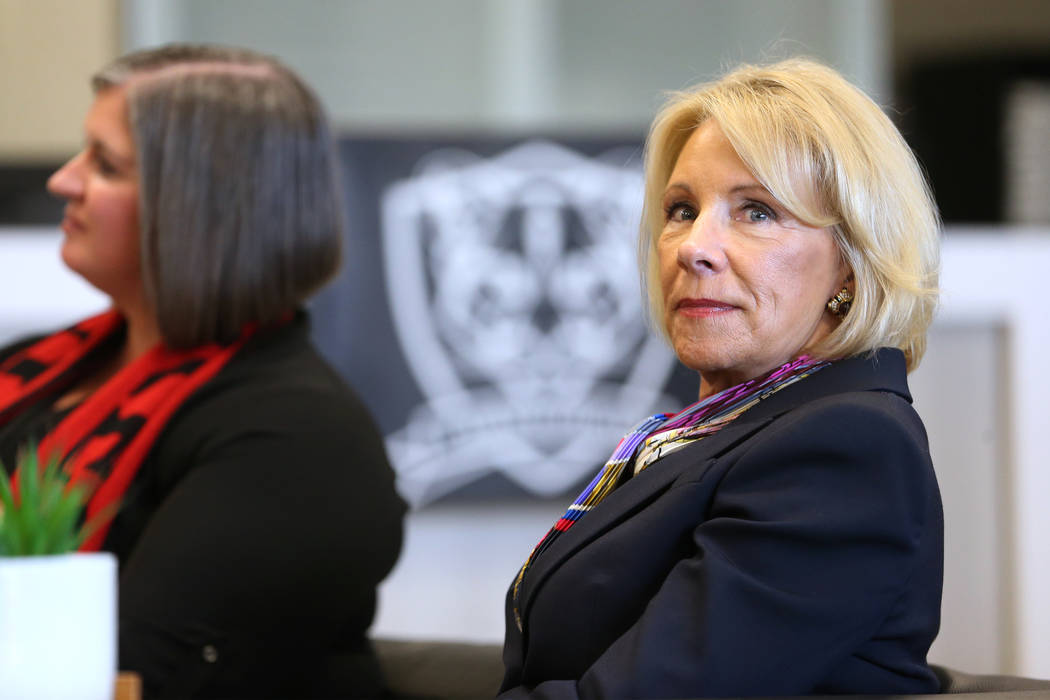 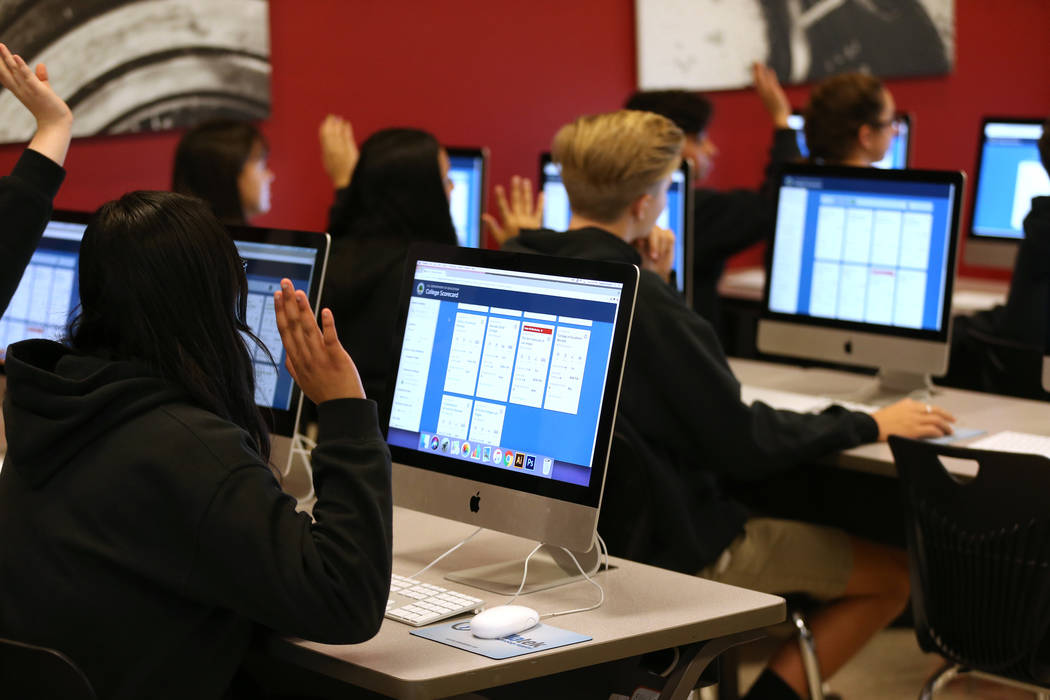 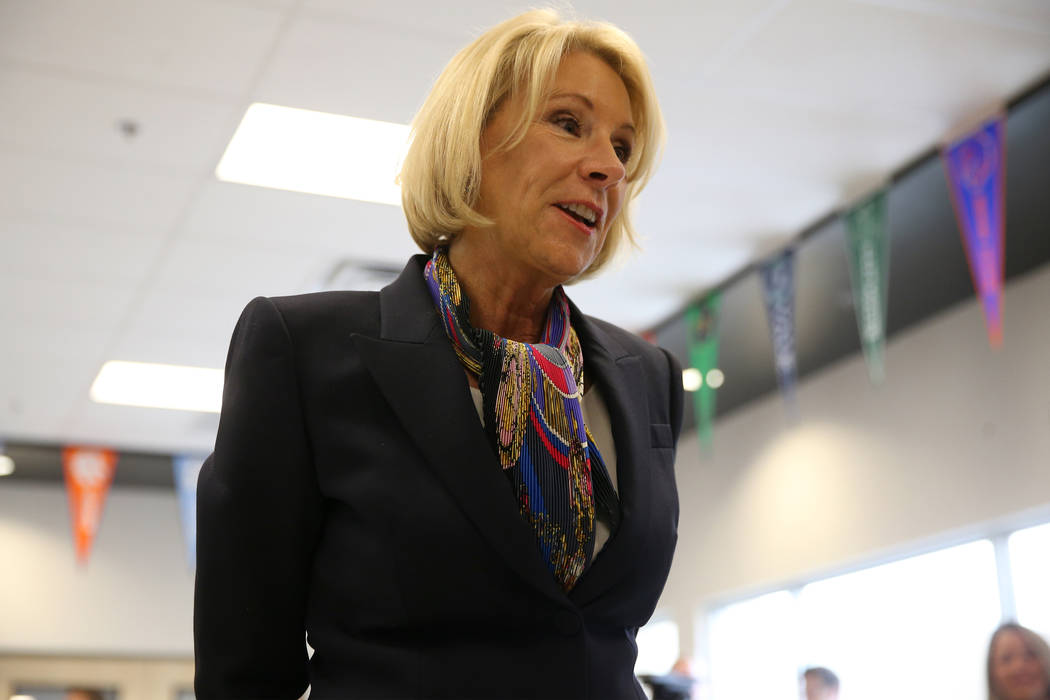 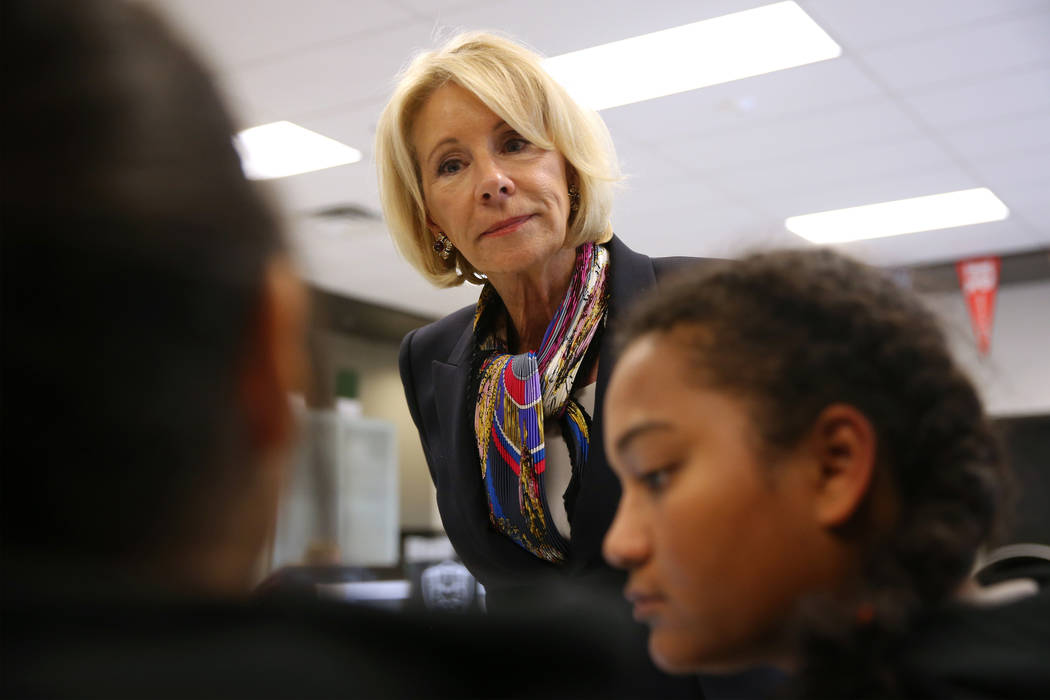 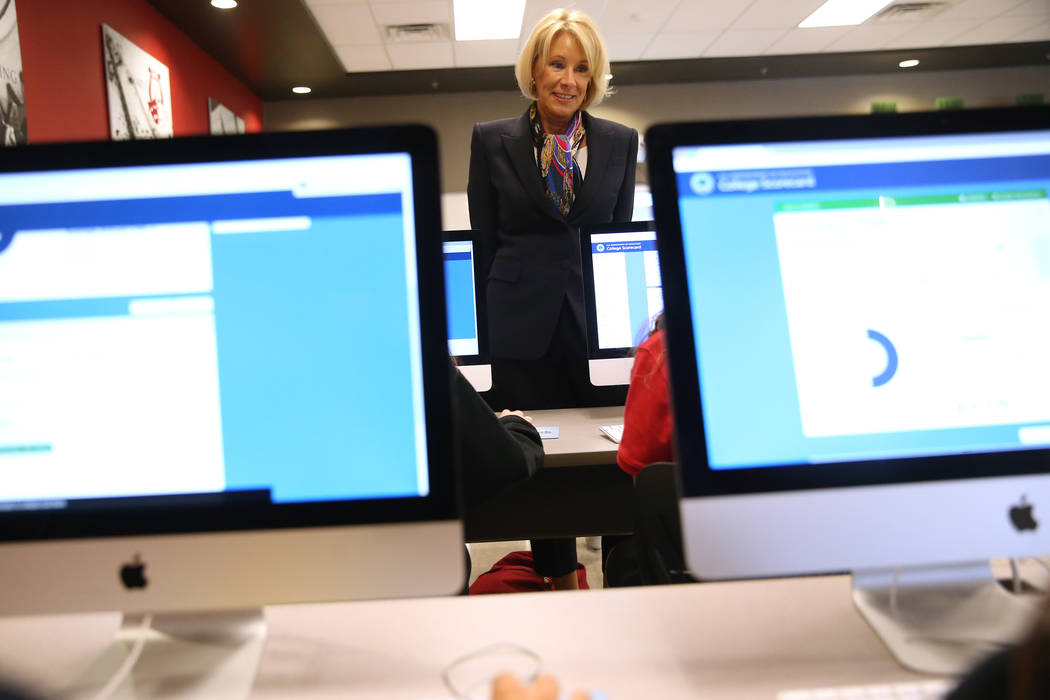 But she also used the stop at Pinecrest Academy’s Cadence campus to champion a proposal she unveiled earlier in the day during a visit to Reno: Removing the Federal Student Aid office from the Department of Education and turning it into an independent bank that would report directly to Congress.

“There are so many pathways for you to pursue today,” DeVos said. “In order to make those decisions, the College Scorecard is one tool you can use.”

Afterward, senior policy adviser Emily Slack, who helped develop the improved tool, led a presentation for the students, many of whom indicated they’d prefer to go to school out of state.

Slack highlighted programs at UNLV and other schools, and encouraged students to explore the data further on their own.

Following the presentation, DeVos and Slack met with students individually and asked about their plans after graduation.

Junior Jessica Soto said plans to study medicine, though she’s not sure where. She said she would use the scorecard to compare programs at colleges throughout the country.

Fellow 11th grader Alondra Zavala said she was considering an English or literature program to help her realize her dreams of being an author. But for a field like writing, Zavala said, future salary can be hard to predict.

“It depends on your popularity,” she noted.

DeVos also noted that students who have already enrolled in college or taken on student debt also could use the College Scorecard could help plot next moves, including whether to transfer to a less-expensive school. Nevada students have one of the highest rates of student loan default in the country.

When Pinecrest students were polled about whether they’d need to take out student loans to afford college, no students put up their hands. DeVos said she hopes they are able to achieve that.

“That should be everyone’s goal, to pursue and find the right fit for yourself and do so at the most competitive and lowest cost possible,” DeVos said.

In remarks after the event, DeVos addressed the proposal she unveiled earlier in the day at the annual Federal Student Aid conference in Reno, where she urged Congress to split the financial aid division from the Department of Education and allow it to function as a government corporation that would report to Congress.

“(FSA) was never set up by Congress to be the kind of size and scale it is today,” DeVos said. “So we really need to look at how we approach governing it, and to ensure that first of all, that students’ needs are met, and then more broadly, that taxpayers’ needs are met.”

Nevada’s Democratic Rep. Susie Lee praised the new College Scorecard, but took a shot at DeVos over her stance on loan foregiveness.

“I very much welcome any move that gives students more information when they make decisions about which school to attend and its costs,” she said. “This new score card is a great first step.

“But when we talk about college affordability, we must also focus on accountability and clarity. While students, especially first-generation students, need greater information, we must also address the systems that benefit loan scammers at the expense of students and taxpayers. The Education Department must still take steps to hold institutions accountable for predatory practices.”