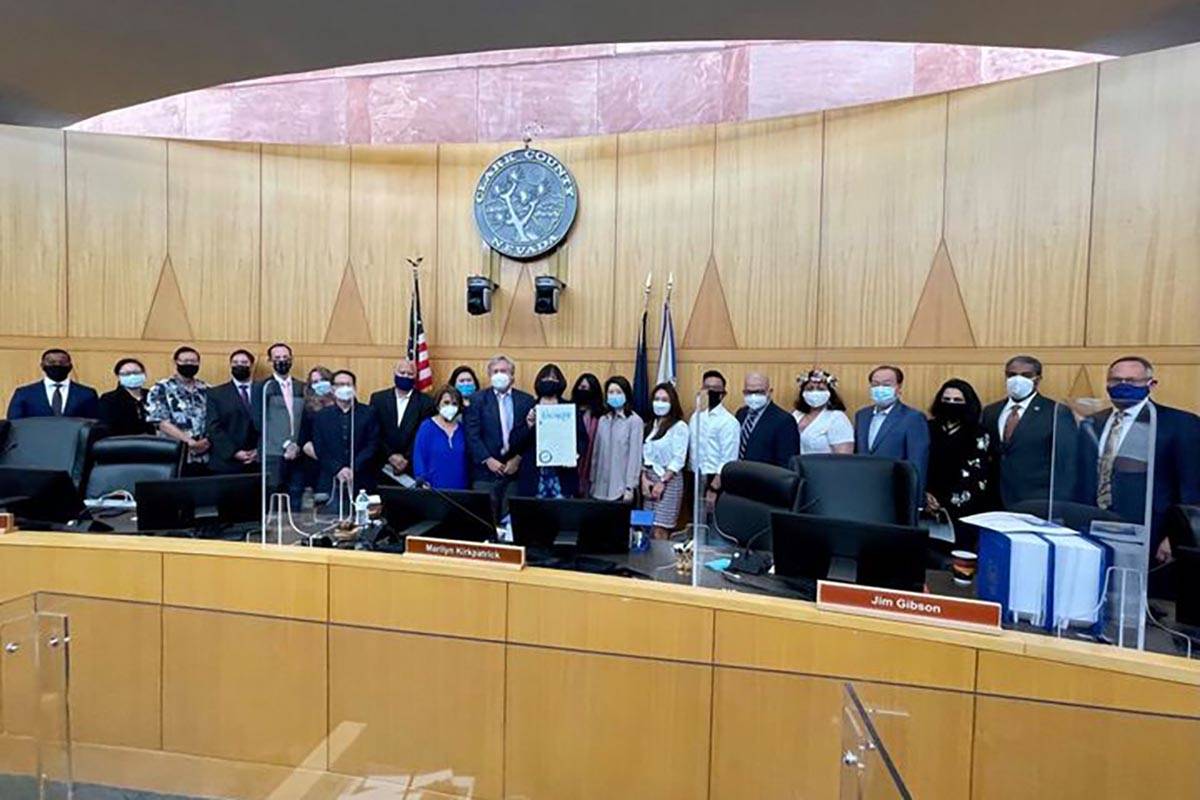 Clark County Commissioners stood beside Asian American leaders literally and figuratively on Tuesday, pledging to protect residents in the wake of recent attacks across the U.S. and a rise in xenophobia stoked by the pandemic.

“Believe me, the commission stands 100 percent behind you,” Commissioner Tick Segerblom said, addressing members of the Asian-American and Pacific Islander community — a growing contingent in Southern Nevada that now accounts for roughly 10 percent of the county’s population.

Segerblom pushed for a resolution that was approved by county lawmakers Tuesday that denounced anti-Asian sentiment and affirmed the county’s commitment to protecting Asian Americans and Pacific Islanders.

The county also called upon other local governments in Nevada to pass similar resolutions.

“We want to say this, that we as Asian Americans are proud to be Americans, and we need to be recognized as Asians as part of America,” said Rozita Lee, a former member of a White House advisory commission on Asian Americans and Pacific Islanders.

“And to have all of these crimes against us is a horrible sin and so we want to say thank you to the commissioners for recognizing this and for making this possible for the resolution,” she added.

There were nearly 3,800 reported hate occurrences against Asian Americans and Pacific Islanders in the U.S. between March 2020 and February, according to the organization Stop AAPI Hate, which tracks such incidents. Most were reported to be verbal harassment and shunning.

Segerblom requested the resolution last month before a deadly mass shooting near Atlanta left eight dead, including six Asian women. The resolution was sought and supported by the county’s Asian-American Pacific Islanders Community Commission, which formed nearly two years ago to advise lawmakers on social and economic issues important to the population.

The coronavirus’ origin from China has ratcheted up inflammatory and anti-Asian rhetoric, even from political leaders. President Donald Trump has referred to COVID-19 as the “Kung Flu” and the “China virus.”

Diversion promising, but funding a concern

A little more than a year after it began, a diversion program for low-level offenders with mental health and/or substance abuse issues is showing promise in Clark County.

Since February 2020, 173 people have been referred to the Law Enforcement Intervention for Mental Health and Addiction pre-booking diversion program — a partnership between the Metropolitan Police Department, Eighth Judicial District Court and private agencies.

Nearly 50 participants have secured employment, 145 have been placed in grant-funded housing and seven recently celebrated graduation from the program, according to specialty court administrator DeNeese Parker.

Commissioner Justin Jones lauded the effort as “exactly where we need to go” and part of a broader restructuring of Metro’s behavioral health unit. He also signaled his support for moving further toward an alternative policing model, such as in Denver, where social service practitioners — not police — are first responders to mental health calls.

Despite its early signs of success, there are questions about the diversion program’s ability to sustain itself. Commission Chairwoman Marilyn Kirkpatrick expressed concern about long-term funding and the lack of enough social service providers in the county.

The effort to meaningfully address mental health and addiction issues in Southern Nevada may require a sweeping plan, Kirkpatrick said. She also pledged to work with the state to ensure that local service providers received settlement money from drug manufacturers and distributors who were sued by the state for their roles in Nevada’s opioid crisis.

The diversion program, which takes nine to 12 months to complete, is meant to address the issues that might otherwise keep participants revolving in and out of incarceration, offering support and life-skills training to increase self-sufficiency, Metro Capt. Roxanne Burke said.

“We have learned over the years that we cannot arrest our way out of all these situations,” she said.