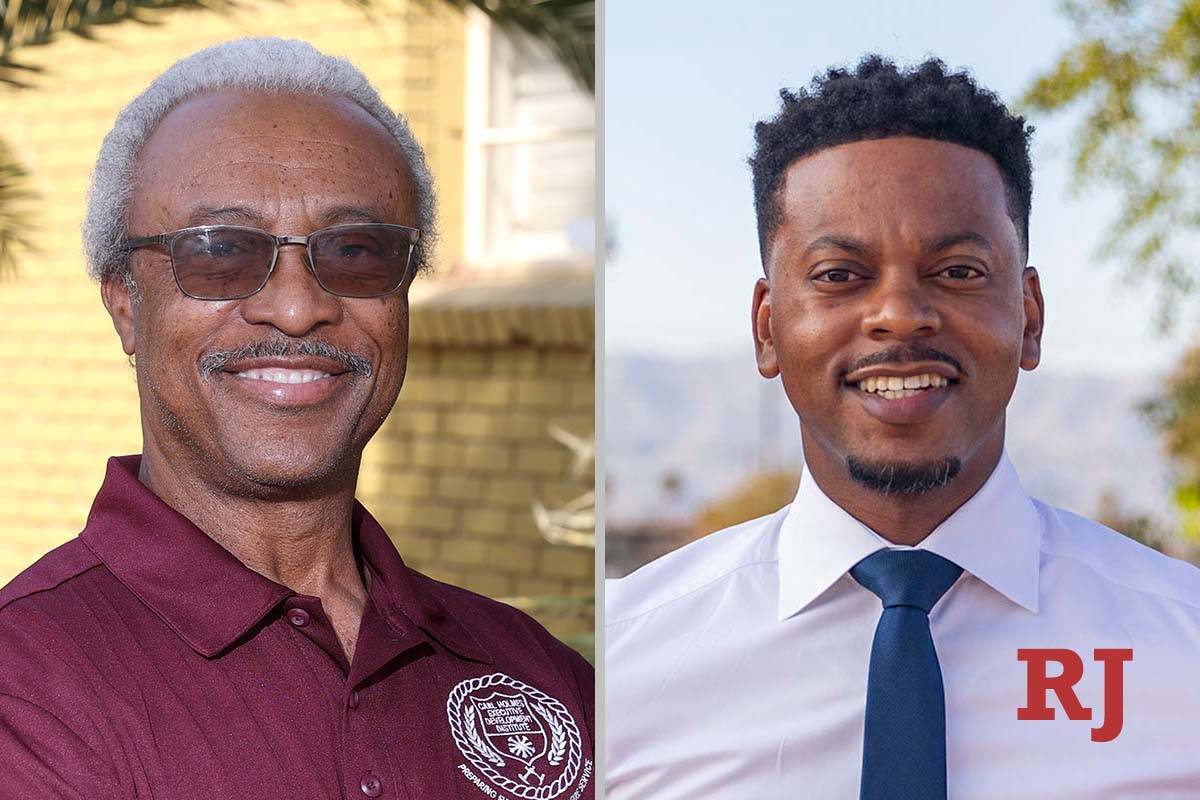 Assemblyman William McCurdy II is politically tested and experienced, while David Washington, an independent candidate, has a long history of grassroots activism behind him.

McCurdy, 32, said that he saw term-limited Weekly’s departure as an opportunity to enact on a local level the progress made over his two terms in the state Assembly, including on matters in economic development and criminal justice reform.

While McCurdy’s pivot to get elected to the powerful seven-member board, dominated by Democrats in recent history, was a “next logical step” and “no-brainer,” the path for Washington, 69, was paved by outside influences.

“A lot of times people get drafted into running for office, and that’s the case with me,” Washington said during a recent interview. “I didn’t just decide because my ego ain’t so big that I have to be in any political office to get work done in the community.”

Washington served for six years as fire chief in Las Vegas, capping a 33-year career in the department that ended when he retired in 2007.

He described himself as an activist throughout most of his adult life, involved in organizations from the United Way to the Metropolitan Police Department’s Multicultural Advisory Committee and in efforts to combat illiteracy and to mentor youth.

He said the coronavirus pandemic has pulled the covers off certain issues rooted in systemic racism, including a lack of health care and economic development.

And he noted how there is a great divide between the access to capital and minority- and black-owned businesses in District D, which is made up of downtown and east Las Vegas, the Historic Westside and portions of North Las Vegas.

Washington said he is working on a nonprofit to establish a revolving loan fund for minority businesses, and he volunteered to spearhead a plan to support all small businesses that would cull resources from local, state and federal partners.

“Red tape sometimes has hurt us in the past,” he said.

McCurdy is calling for economic diversification in the district, an acknowledgement that the pandemic has shown the faultiness in disproportionately relying on tourism.

“We have to focus on reinventing ourselves,” he said, adding that he believed District D could be the catalyst for new revenue streams.

The reinvention, he said, includes training the workforce to capitalize on the electric vehicle sector, creating a cultural education district that would support arts, entertainment and technology, and encouraging entrepreneurship through grants, tax incentives and easing business restrictions.

‘There would be an uprising’

Although the pandemic has commanded much of the attention from elected officials in 2020, the social unrest stirred by the late May killing of George Floyd, a Black man, in Minneapolis police custody has raised questions about how officials across the country will address broad concerns about policing.

“If we were to see white people killed at the hands of police at the rate that Black people have been killed, there would be an uprising,” McCurdy said.

He said he believed it is the commission’s responsibility to review arcane policies and work toward police reforms when asked about the role of government to respond to the demand for change from protesters who have taken to Las Vegas streets since the spring.

McCurdy, who is Black, said he is fearful for his two sons, speaking broadly, but he also believed the rise of demonstrations across the country to be a transformative moment in history that will lead to progress.

Washington, who is also Black, said he supported the state Legislature’s recent ban on police chokeholds and Metro’s conscious decision, as he said he understood it, to not buy military surplus equipment: “We don’t need no damn tanks.”

He said he believed there could be room for certain funding shifts within the department, an agency which he called “very fine.” But he added that he wants to keep intact the ratio of two officers for every 1,000 residents while properly equipping police personnel with safety gear during the pandemic.

Fit for the job

McCurdy and Washington agreed it would require all three levels of government to get the county back on track amid a pandemic that has struck Nevada particularly hard. And while McCurdy points to the relationships he has cultivated across the board during his time in office, he is also clear that he is not defined by his political background.

McCurdy was a high school drop-out and teenage father who has worked construction. He earned his high school diploma at 24 years old and attended community college. Now he is finishing a bachelor’s degree in Urban Studies from UNLV, with plans to attend the Boyd School of Law.

“My leadership and my understanding of what people are going through extends far beyond politics,” he said. “Politics and my current position is a byproduct of things that I’ve gone through.”

He said his philosophy is that government must approve policies to put more power into the hands of the people and advance their interests.

He noted that he is the only of the two candidates to have passed policies, including during two recent special sessions where lawmakers boosted protections for hospitality workers and alleviated strain on the state’s broken unemployment system to help people who are out of work.

While McCurdy has far outraised Washington as of June 30 and carries political name recognition, Washington said he too has a background fit for the commission.

He has experience in policy setting as a former Las Vegas fire marshal and working with organizations through community involvement. And he is no stranger to higher politics: His wife, Marcia Washington, is an appointed state senator.

“I believe the path that I’ve taken certainly prepares me to deal with that position,” Washington said about the District D seat. “There’s no doubt in my mind.”

Two independent candidates who initially filed to run in this race, Stanley Washington and Henry Thorns, will not appear on the ballot, and the former said he is backing David Washington — no relation.