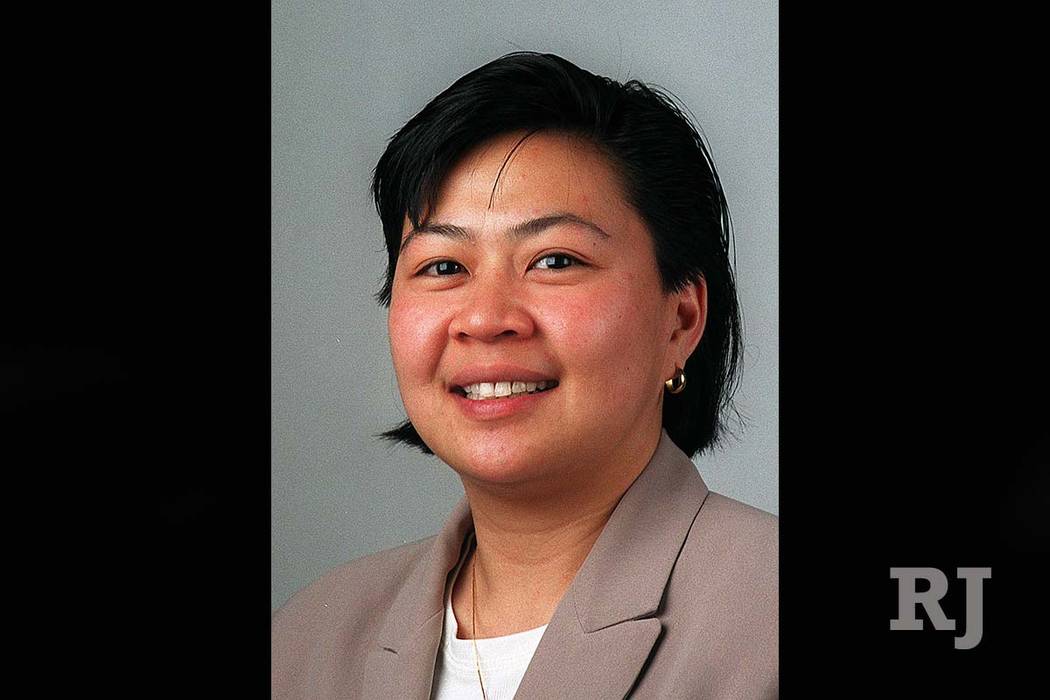 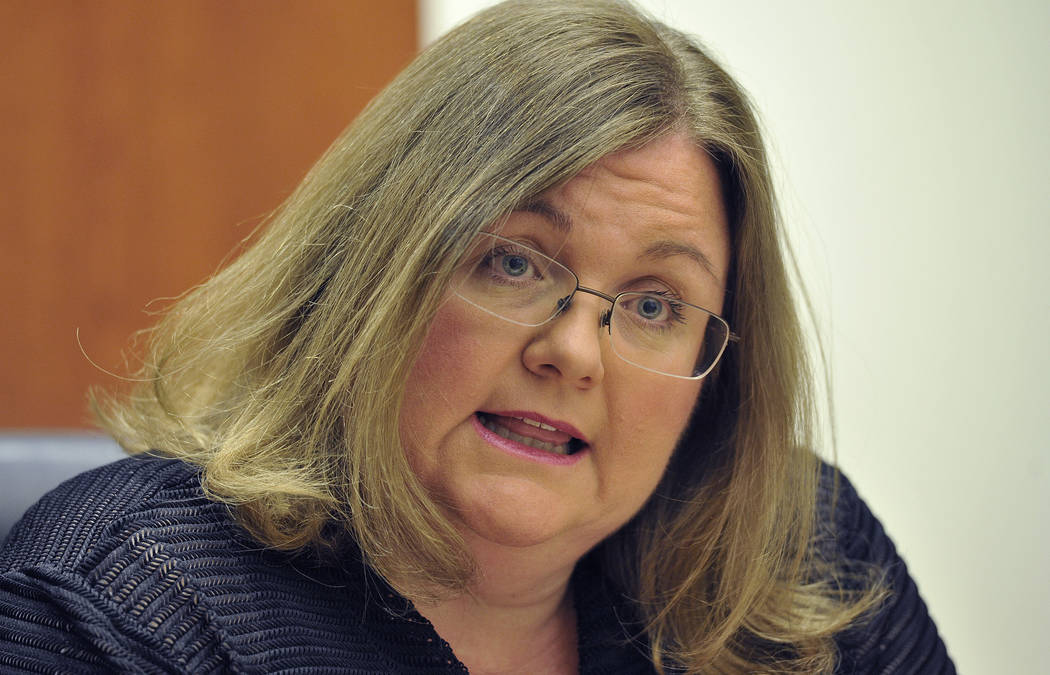 Lisa Brown, then a candidate for Family Court, speaks with the Review-Journal editorial board on March 17, 2014. (Mark Damon/Las Vegas Review-Journal) 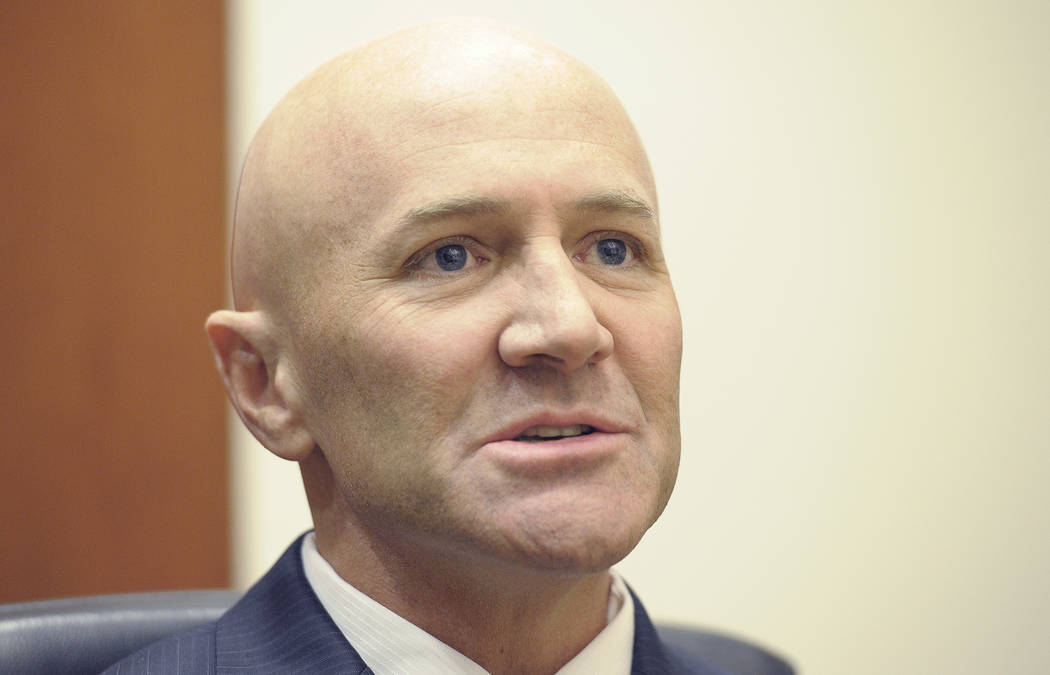 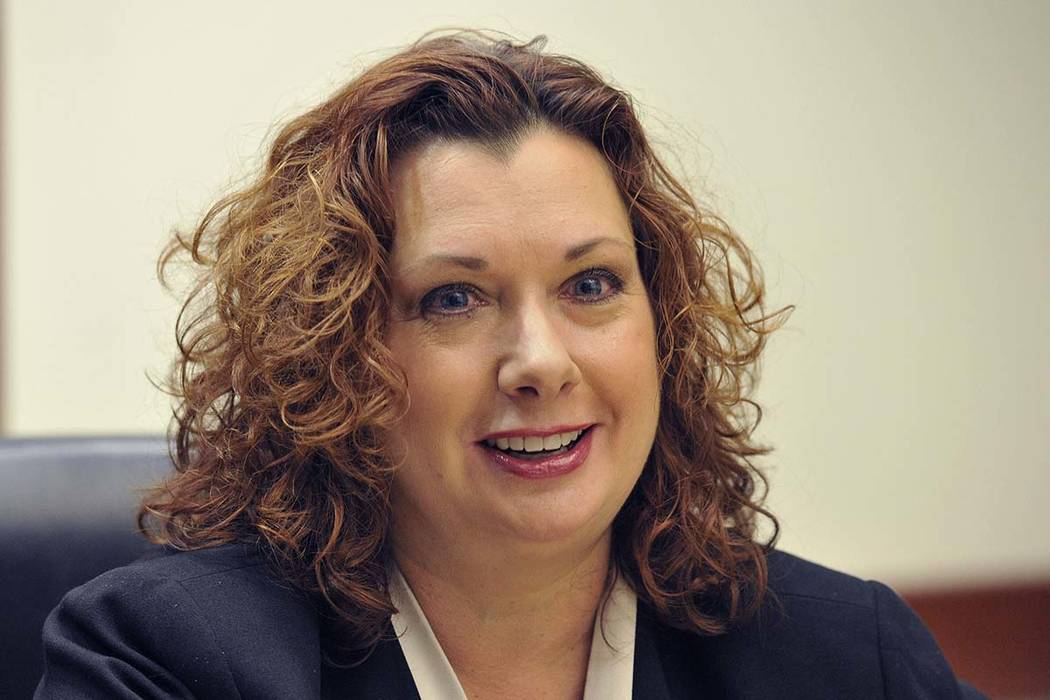 Rena Hughes, then a candidate for Family Court, speaks with the Review-Journal editorial board on March 3, 2014. (Mark Damon/Las Vegas Review-Journal) 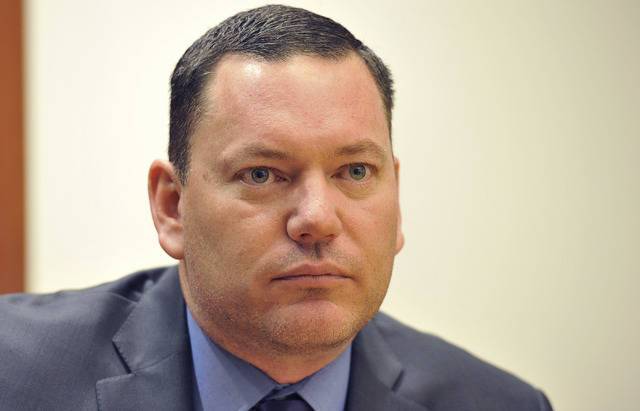 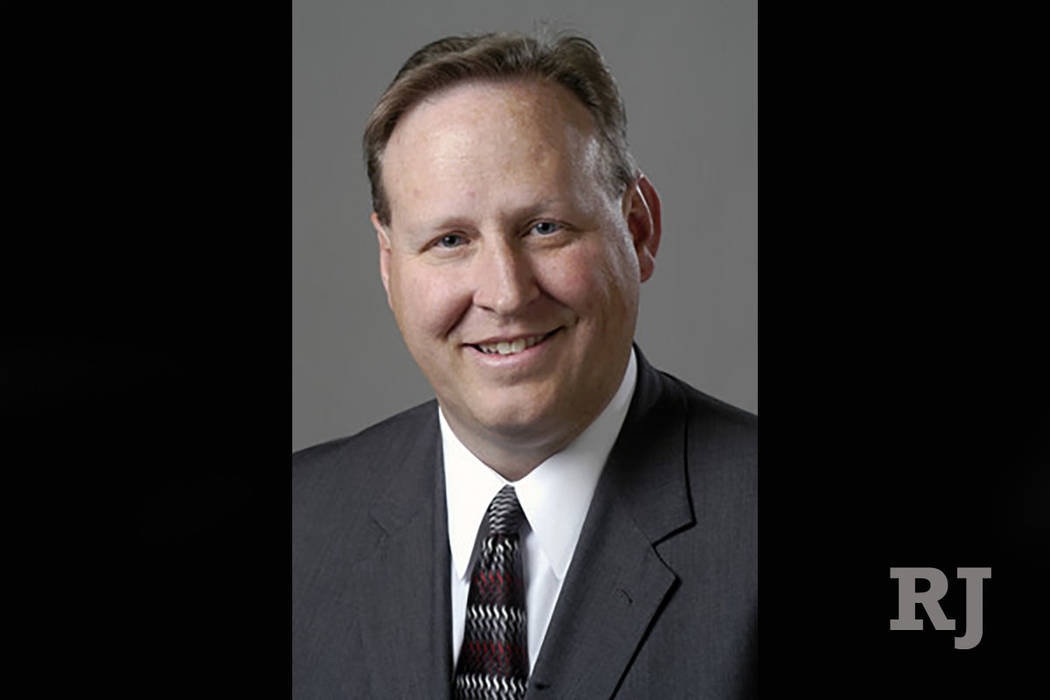 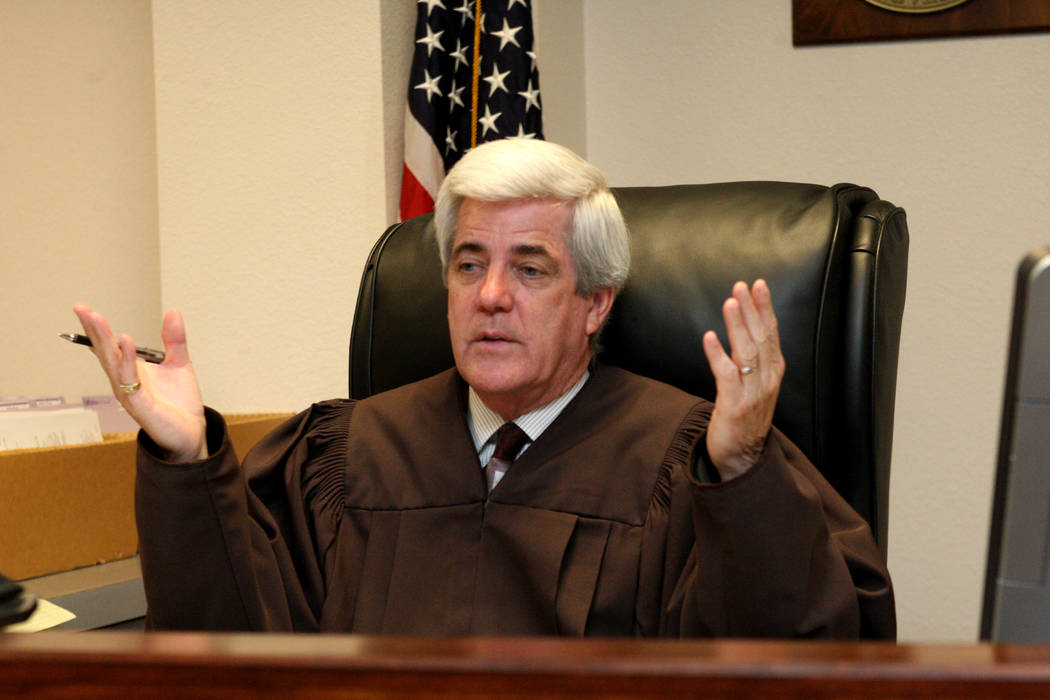 Family Court Judge Frank Sullivan presides over his courtroom on May 7, 2015, in Las Vegas. (RJ file) 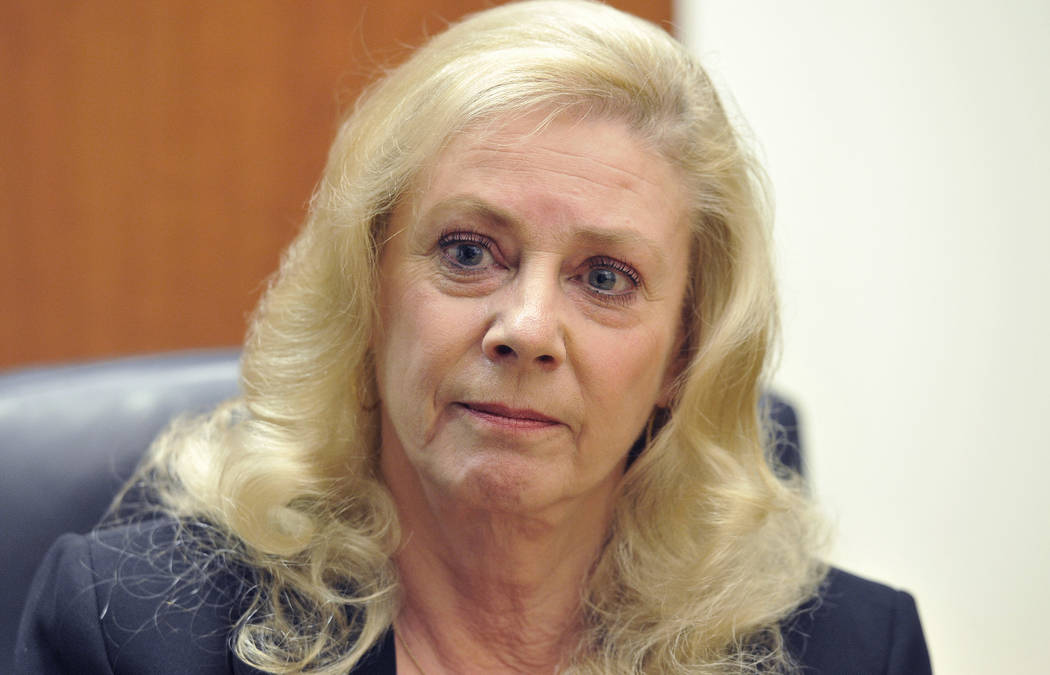 Clark County attorneys want to replace six Family Court judges, the most of any court reviewed in the 2019 Judicial Performance Evaluation sponsored by the Las Vegas Review-Journal.

Of the 20 sitting Family Court judges, 19 were evaluated. Rhonda Forsberg, who was appointed in April, was not included in the review.

Attorneys voted to replace Cheryl Moss and Sandra Pomrenze — repeats from the “do not retain” list in 2013, the last time the survey was conducted. Pomrenze received a 28 percent retention score, the lowest of the 89 judges reviewed this year.

Attorneys returned polarizing retention scores for Family Court, with judges generally scoring either in the 40s or between 70 and 90 percent.

This, according to Rebecca Gill, the UNLV researcher and associate professor of political science who conducted the survey, is consistent with results of Family Court performance reviews across the country — in part, she said, because emotions run high in such courtrooms, and “very few people walk out of Family Court happy.”

“There are some unique characteristics of the nature of these cases and the nature of the job that it’s not surprising that Family Court judges tend to overall have lower scores, and they tend to have a larger variance of scores,” Gill said.

Of the judges who received a score of 50 percent or below, only Harter and Hughes agreed to give interviews.

Forty-eight percent of responding attorneys voted to retain Harter. On a five-point weighted scale, he received a 3.3 summary score for the individual questions regarding his performance.

Harter, sitting in his courtroom in late October, told the Review-Journal he was shocked to see that his retention score had “dropped so much,” from 71 percent in the 2013 review.

“How did I fall from grace?” Harter asked, adding that he intends to run for re-election.

The judge, who was first elected to Family Court in 2008 and made an unsuccessful bid last year for the state Supreme Court, has a theory: Steve Sanson, a controversial figure in Nevada politics, has waged an ongoing smear campaign against him that began as early as 2014.

Sanson, a longtime Family Court critic, is president of Veterans in Politics International, a local organization that says it “exposes corruption and unethical behaviors.” Sanson also is behind a Facebook page called “WAR Declared on Clark County Family Court System,” which posts videos of judges in their courtrooms, among other things.

Harter suspects Sanson used his connections in the Nevada political landscape to get attorneys who have never appeared before Harter, or have not recently appeared before him, to rate him poorly in the review.

Sanson, in response, told the Review-Journal: “Anybody could Google Harter’s name and find out what we’ve found on him, but did we go to attorneys and say, ‘Don’t vote for Judge Harter’? No, we absolutely did not do that. People make up their own minds based on the evidence we provide.”

Attorneys, in the anonymous comment portion of the review, described Harter as a “hit and miss” judge who “does everything he can to avoid coming in to Family Court on a daily basis.”

But Harter attributed those comments to his efficiency in the courtroom and timely decisions in cases.

“I run a very efficient, tight ship, and I require attorneys to be prepared. I follow the rules and know the law,” he said. “That is absolutely what I try to do, and it’s not so I can hurry and run home.”

Like Harter, Hughes hopes to retain her seat. She is nearing the end of her first term in Family Court. Forty-two percent of responding attorneys voted to retain her.

Forty-seven percent of the lawyers did not think that Hughes accurately applies the law. Attorneys also described her as “inconsistent” and “unpredictable.”

Hughes was publicly reprimanded last year by the Nevada Commission on Judicial Discipline. The commission ordered her to undergo further legal education after she improperly held a mother in contempt of court during a custody battle in 2016.

At the hearing, Hughes awarded a girl’s father temporary custody — an order that the commission found “was not primarily motivated by the best interest of the child” — and then threatened to send the crying girl to a shelter if she refused to go with her father.

In an interview with the newspaper, Hughes declined to talk specifically about that case but said, “In general terms, I took the commission’s order to heart.”

Hughes said she since has taken as many classes as she could, without neglecting her caseload, to help her with high-conflict custody cases.

“My focus and dedication is to uphold the laws of the state of Nevada and apply them fairly as it pertains to the best interest of the children, and I won’t be deterred from that,” she said.

Moss’ retention score dropped to 42 percent from 44 percent in 2013. She received her highest score of 65 percent in 2002, the first year she was evaluated.

Mirroring her 2013 results, Moss received her lowest score this year in the area of punctuality. Fifty-eight percent of 83 respondents said Moss failed at keeping her court calendar moving.

“Sometimes have to wait two hours or more to be heard,” one attorney said. Another said she “could not run her courtroom on time if her life depended on it.”

Nevada bar records show Moss has never been disciplined, but in 2005, attorney Randy Rumph, who was representing himself in a custody case, lodged a complaint against Moss to the Judicial Discipline Commission.

Rumph said the judge had given preferential treatment to lawyers who had donated to her campaigns, including his ex-wife’s lawyer. Two of her former law clerks signed affidavits supporting the allegation of favoritism.

The complaint was dismissed two years later, but the commission at the time told Rumph it had “taken what it considers to be appropriate action,” suggesting that Moss had been privately reprimanded.

Potter, who’s been on the bench for more than 13 years, dropped to a 44 percent retention score from 59 percent in 2013. The drop could be attributed to his two-month suspension without pay in late 2017 after he ordered a lawyer handcuffed in court and lashed out during his own disciplinary hearing. The Judicial Discipline Commission also ordered him to undergo a psychiatric evaluation.

Fifty-seven percent of 88 respondents this year thought Potter was rude. Anonymous comments described him as a “loose cannon” with a track record of yelling at attorneys and litigants.

One attorney expressed fear about going into his courtroom, adding that “there is no way to prepare a client for what may happen.”

Forty-seven percent of responding lawyers voted to keep Brown, and 47 percent do not believe Brown accurately applies the law.

One attorney commented that she “relies too much on her law clerk to make her decisions.” Another attorney believes “her law clerk prepares notes for her to reference.”

After his more than 10 years on the bench, lawyers still want Bryce Duckworth, the presiding judge, to stick around. And he plans on it, he said in an interview.

According to Duckworth, he carves out personal time to avoid “the burnout,” prepares for his cases and enters the courtroom with the mindset that each person appearing before him is “having their worst day ever.” That, he said, helps him maintain his composure and reminds him that every litigant deserves his respect.

“I recognize they’re going through a crisis,” he said. “It’s not always easy going through those emotions, and part of my function, I believe, is to try and help bring them back into focus of what truly is important.”

Because of that, he said, “even if they didn’t get the result they wanted, they feel like they still had their opportunity to present their case.”

Eighty-seven percent of responding lawyers voted to keep Frank Sullivan, who was first elected to Family Court in 2008.

When compared with the rest of the Family Court judges, not including Duckworth, Sullivan’s 4.3 summary score stands out.

Eighty-seven percent of lawyers, for example, agreed that Sullivan was free from racial or ethnic bias, and 84 percent thought he was courteous and respectful.

“You have to be kind and treat everybody with respect,” Sullivan told the Review-Journal. “We have to remember that we’re public servants, that we work for the people. You have to let people have their day in court.”

He will run again next year, he said.