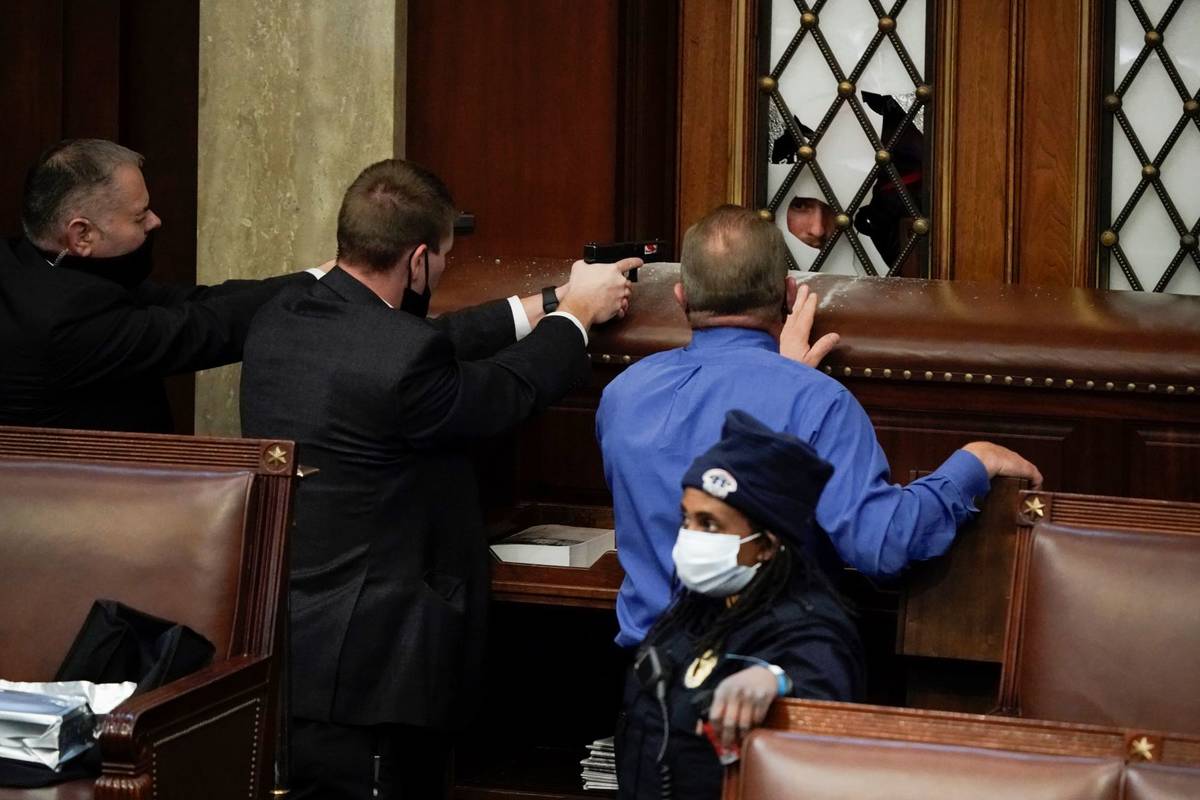 Police with guns drawn watch as protesters try to break into the House Chamber at the U.S. Capitol on Wednesday, Jan. 6, 2021, in Washington. (AP Photo/J. Scott Applewhite) 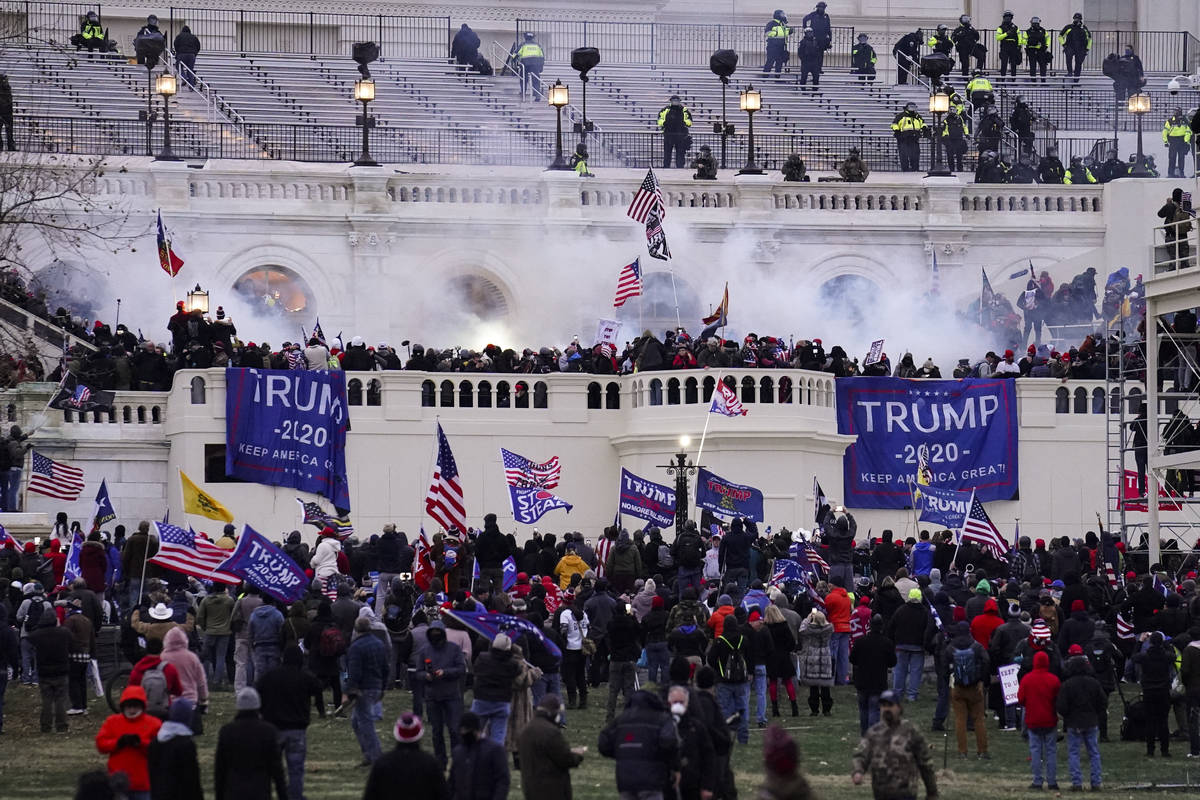 Violent protesters, loyal to President Donald Trump, storm the Capitol, Wednesday, Jan. 6, 2021, in Washington. It's been a stunning day as a number of lawmakers and then the mob of protesters tried to overturn America's presidential election, undercut the nation's democracy and keep Democrat Joe Biden from replacing Trump in the White House. (AP Photo/John Minchillo) 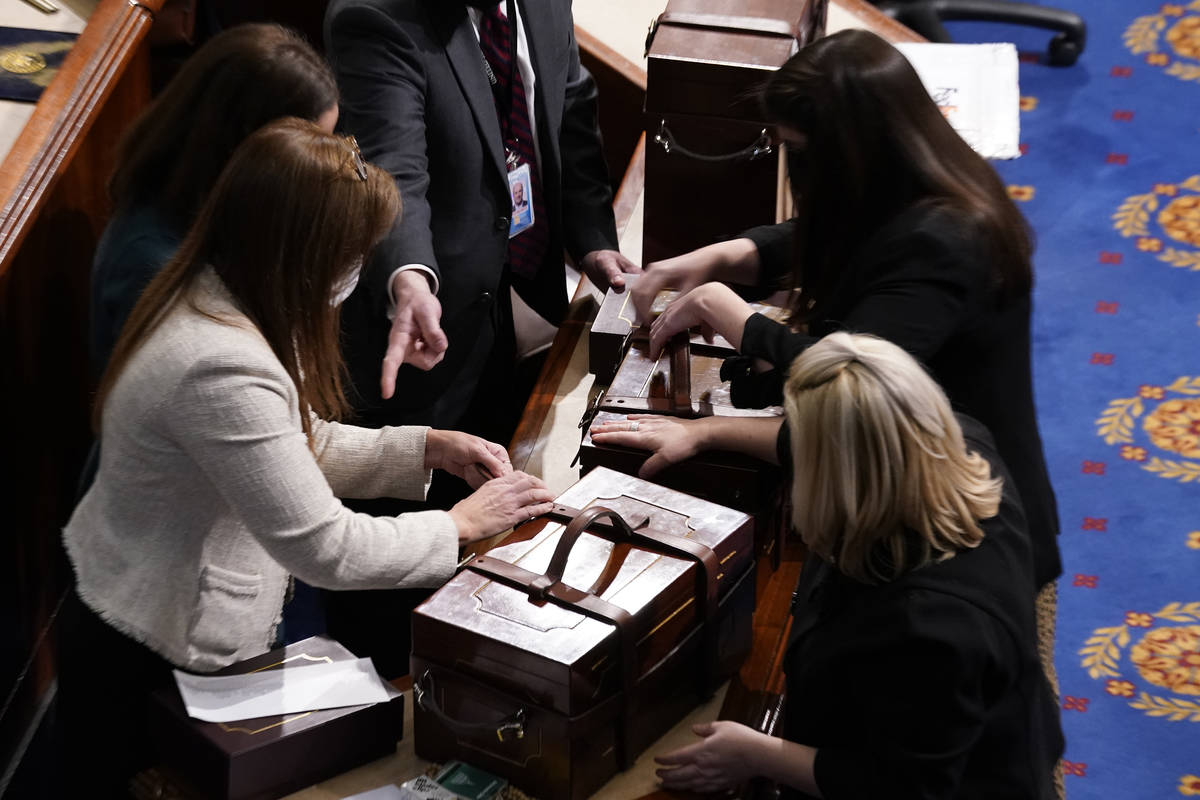 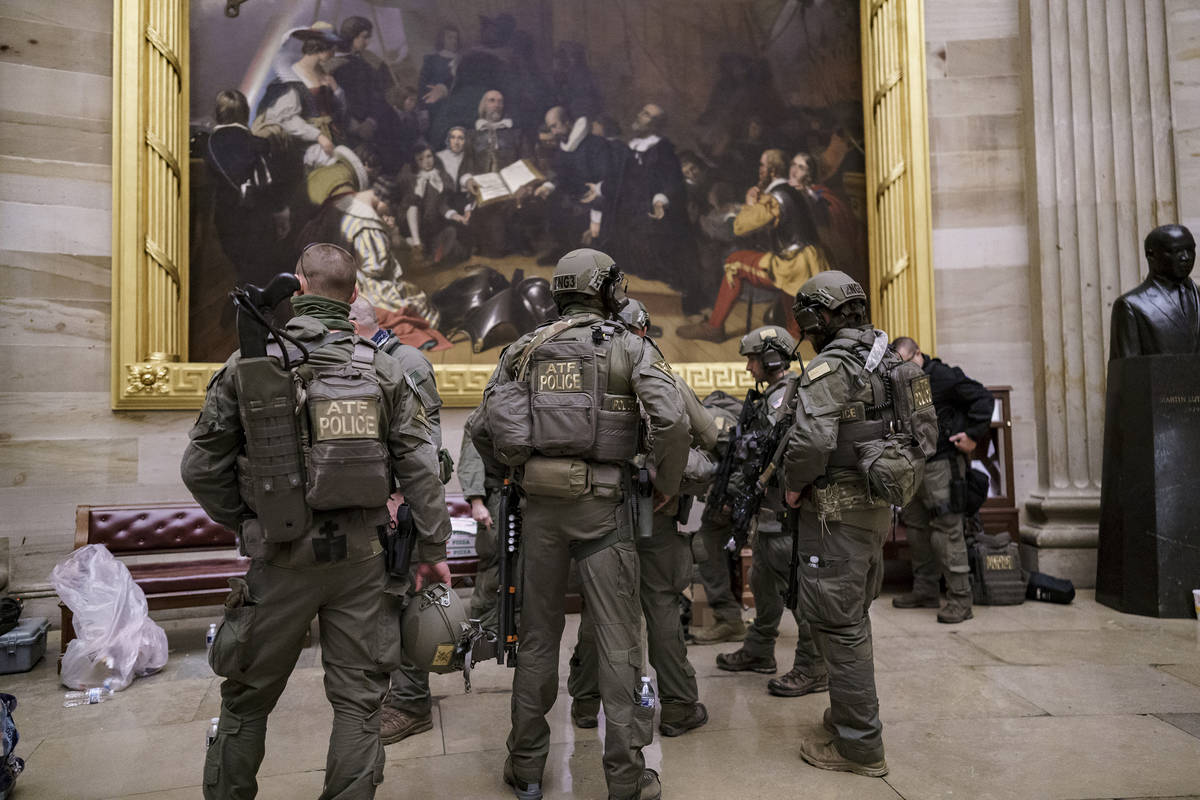 After violent protesters loyal to President Donald Trump stormed the U.S. Capitol today, a tactical team with ATF gathers in the Rotunda to provide security for the continuation of the joint session of the House and Senate to count the Electoral College votes cast in November's election, at the Capitol in Washington, Wednesday, Jan. 6, 2021. (AP Photo/J. Scott Applewhite)

WASHINGTON — A violent siege of the Capitol spurred by President Donald Trump on Wednesday forced the evacuation of lawmakers and delayed their constitutional certification of Democrat Joe Biden’s 2020 presidential election victory.

Biden had collected 306 electoral votes after debates in the House and Senate turned aside challenges to the Electoral College votes in Arizona and Pennsylvania.

A date that in past years has marked the routine, peaceful transfer of power turned into an ugly assault by rioters who were carrying Trump signs and surrounding the Capitol as violence broke out.

One woman died from a gunshot wound to the chest, D.C. police reported. Information about the shooting was expected to be released later. Three other people also reportedly died during the riot from “medical emergencies.”

House members were given gas masks to wear as rioters tried to enter the chamber, and police hurried to evacuate the lawmakers to safer areas.

It was hours before law enforcement with tactical gear and weapons arrived to back up police, restoring peace to the Capitol and allowing the proceedings to resume.

Vice President Mike Pence, who presided over the certification process in a joint session of Congress, called the riot “a dark day in the history of the United States Capitol.”

And he joined lawmakers and officials who grieved for the loss of life.

Police officers were wounded in the surprise melee and fought to keep masked insurrectionists from entering through the doors. The blue uniforms were overmatched.

Trump calls on supporters to march

Trump addressed a rally earlier Wednesday when he again claimed the election was stolen because of widespread voter fraud. He urged supporters to march to the Capitol to show strength.

That march led to the insurrection. The violence played out on cable television and prompted an outpouring of worry from foreign leaders watching a symbol of U.S. democracy being overrun by masked men with backpacks storming the Capitol.

After hours of chaos and disruption, law enforcement agencies from D.C., Maryland, Virginia and the National Guard secured the Capitol and moved the mob away from the building to allow the House and Senate to continue their constitutional duty of certification.

The Department of Homeland Security and an FBI team were also brought in for backup and investigation.

House Speaker Nancy Pelosi, D-Calif., summoned lawmakers back for a night session to complete the process and certify the election results submitted by all 50 states, despite a day marred by violence she said Trump incited.

“We will now be part of history, as such a shameful picture of our country was put out to the world, instigated at the highest level,” Pelosi told colleagues.

She was not alone in the denunciation of Trump or the rioters, who vandalized the Speaker’s Office and Senate chamber, hoisting Confederate flags and hanging Trump banners on historical figures in Statuary Hall.

Bush, the most recent Republican to sit in the Oval Office prior to Trump, said, “This is how election results are disputed in a banana republic — not our democratic republic.”

“I am appalled by the reckless behavior of some political leaders since the election and by the lack of respect shown today for our institutions, our traditions, and our law enforcement,” Bush said.

Obama said, “History will rightly remember today’s violence at the Capitol, incited by a sitting president who has continued to baselessly lie about the outcome of a lawful election, as a moment of great dishonor and shame for our nation.”

Rank and file lawmakers were angered, too.

Rep. Mark Amodei, D-Nev., called it “shameful,” and Sen. Catherine Cortez Masto, D-Nev., who was expected to speak on the Senate floor before violence broke out, called it “un-American and unacceptable.”

She later urged her Senate colleagues to “lower the political temperature” in arguing that a Republican challenge to Arizona’s electoral vote should be dismissed. It was, 93-6.

The day’s violence shook some GOP objectors, who decided to vote to certify results in key states.

Sen. Kelly Loeffler, R-Ga., who lost a runoff election Tuesday, received applause when she announced she would vote to certify.

“The events that transpired forced me to reconsider,” she said.

Those events rattled Democrats and Republicans alike, as well as Capitol Hill police, who were called “traitors” by the angry mob.

Lawmakers heard gunshots and screaming. Video of the House chamber showed armed law enforcement personnel with guns drawn and pointing at rioters peering through the front entrance leading to the House floor.

When the Senate resumed debate, Majority Leader Mitch McConnell, R-Ky., heaped scorn on those who violated the institutions of democracy.

“The United States Senate will not be intimidated,” McConnell said, or “kept out of this chamber by thugs, mobs or threats.”

But more piercing in his comments was Senate Minority Leader Chuck Schumer, D-N.Y., who said the president incited the violence carried out by “rioters and insurrectionists” in a fit of pique over his election loss.

“This mob was in good part President Trump’s doing, incited by his words, his lies. This violence in good part is his responsibility. His everlasting shame,” Schumer said.

After the carnage, a defiant Trump appeared on a video and addressed those who attended his Save America March, telling them to “go home.” Still, Trump told the insurrectionists that he understood their concern because the election “was stolen.”

Twitter took the unprecedented step of locking his account for 12 hours and demanding several of his tweets be deleted. The White House press office remained quiet.

The Trump campaign and Republican groups have lost 62 cases in federal courts that found claims of voter fraud unfounded. Those lawsuits challenged results in swing states, including Nevada, but also Georgia, Pennsylvania, Arizona and others.

Every state certified its election results, but Trump loyalists in the House and Senate announced they would challenge Electoral College victories in key states.

Sen. Ted Cruz, R-Texas, led Senate objectors and argued for a 10-day audit of several states, all won by Biden. Republican Sen. Pat Toomey of Pennsylvania scoffed: “Why not challenge the states where Donald Trump won?”

The effort divided Republicans. McConnell led the effort against the objectors in the Senate, siding with Democrats, who urged a certification of the results.

Trump urged Pence to send the results back to the states, blocking certification.

But the vice president, just hours before the violence broke out, sent a letter to lawmakers saying his interpretation of the 12th Amendment gave him no authority to overturn or reject election results from the states. He was prepared to be master of ceremonies for certification.

Moments later, Trump addressed his marchers, who then stormed the Capitol. Pence was evacuated as rioters broke into the Senate chamber and sat in the presiding officer’s chair, which the vice president had left moments before.

Biden, speaking in Wilmington, called on Trump to stop the violence and the assault.

“The words of a president matter, no matter how good or bad that president is,” Biden said. “President Trump, step up.”

He will take the oath of office at his Jan. 20 inauguration at the Capitol.