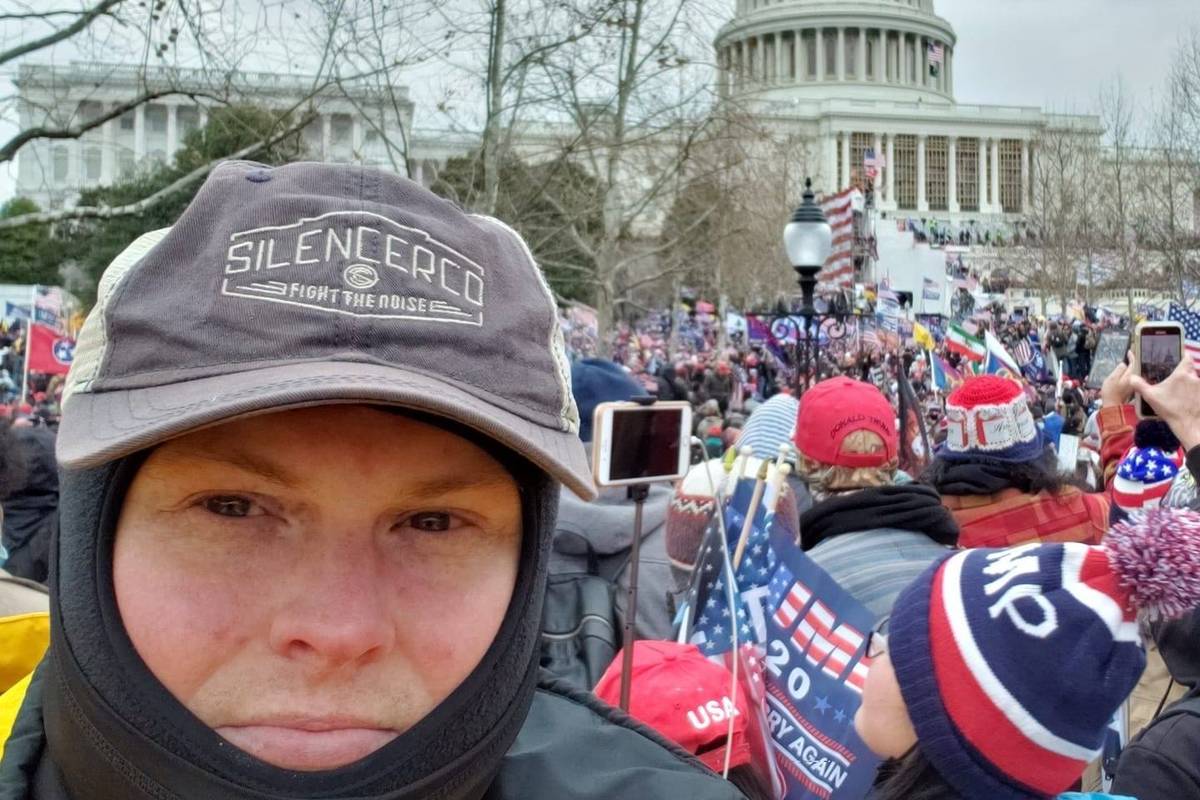 Las Vegas police officer Christopher Cooney is pictured in a crowd of President Donald Trump's supporters in Washington, D.C., on Jan. 6, 2021, the day of the deadly attack on the U.S. Capitol. Cooney, who has not been charged in connection with the riot, set the photo as his profile picture on Facebook. (Facebook) 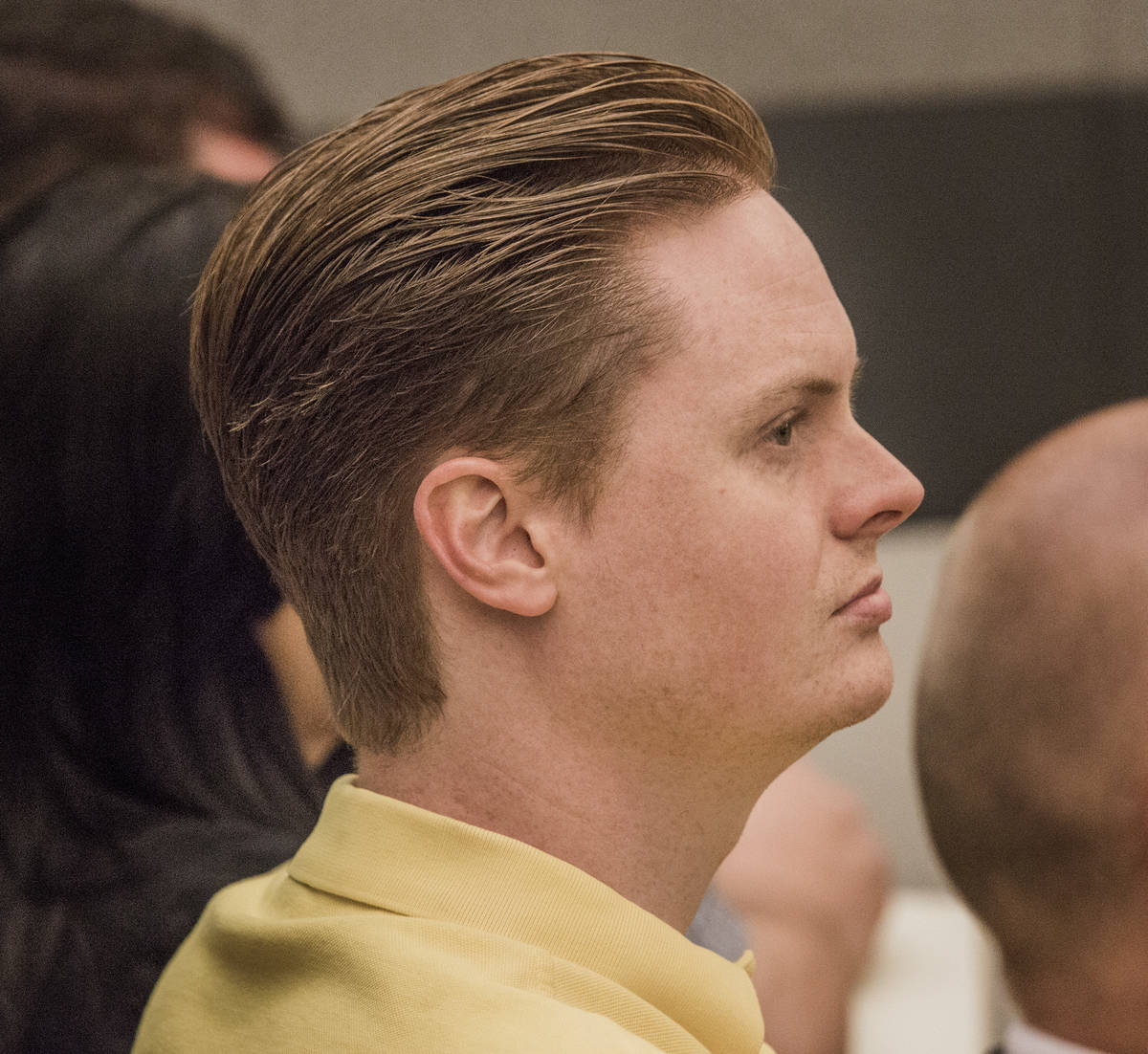 The Metropolitan Police Department is investigating a patrol officer who posted a photo of himself with a crowd of President Donald Trump loyalists last week outside the U.S. Capitol.

Christopher Cooney — a patrol officer whose credibility was called into question during court proceedings in an attempted murder case against his mother — changed his profile photo on Facebook to a shot of himself outside the Capitol building on Jan. 6, the day a four-hour riot left five dead, including a Capitol Police officer.

Whether Cooney entered the Capitol building with the mob remained under investigation Friday, according to Metro spokesman Larry Hadfield.

“We intend to look into all allegations,” he said, “and we are still at that point.”

But Steve Grammas, president of the Las Vegas Police Protective Association, said in a statement Friday that the officer told the police union he “had no involvement or engagement in any illegal activity.”

Cooney did not return phone calls from the Las Vegas Review-Journal seeking comment.

“He took a photo as he stood at the Capitol,” Grammas said. “After being up all day, he decided to go back to his hotel for the evening. Our officer was only on the west side of the Capitol and while he saw people walking up the steps, he never saw any violence or entry into the Capitol.”

Metro said earlier this week that it had “received information that some of its employees may have participated” in the attack, but the department has not disclosed how many more employees, in addition to Cooney, were believed to have traveled to Washington, D.C., to protest the result of the November election.

In the photo shared by Cooney on Facebook, the officer is wearing a gray baseball cap featuring the logo of SilencerCo, a manufacturer of firearm suppressors. The Capitol, surrounded by a sea of right-wing extremists and Trump supporters clad in red, white and blue, serves as the backdrop.

But the version of the meme posted by the officer’s brother replaces the face of one of the characters with “Pepe the Frog” — a once harmless cartoon that has evolved into a hate symbol.

As of Friday evening, Cooney had not removed the Capitol photo from his Facebook profile.

It is not clear what charges Las Vegas police officers might face if they are found to have participated in the riot, but two off-duty Virginia police officers were federally charged earlier this week with knowingly entering or remaining in any restricted building or grounds without lawful authority and violent entry and disorderly conduct on Capitol grounds.

The Virginia officers were photographed in the Capitol building making an obscene gesture in front of the John Stark statue, according to a criminal complaint.

In addition to possible criminal charges, if a Metro officer is found to have participated in the riot, the employee could face suspension or termination, according to Grammas, the Metro police union president.

Christopher Cooney, who is assigned to Metro’s convention center area command, which includes the Strip, joined the department in 2008.

Initially, Christopher Cooney invoked his Fifth Amendment right when called to testify in a preliminary hearing in the case, saying, at the time, that he believed he was being targeted as an unindicted co-conspirator and was concerned his testimony might incriminate him. A judge agreed and allowed the officer to consult a lawyer before testifying.

The officer eventually took the witness stand in the preliminary hearing, and, later, at his mother’s trial in 2014.

By the end of the trial, prosecutors were questioning the officer’s credibility.

The jury heard vastly different versions of the June 2011 shooting.

Prosecutors said Kevin Cooney was afraid of his mother, and was sitting on the couch of his family’s Summerlin home when his mother shot him with the same gun she had used decades earlier to kill the siblings’ father in Florida. A jury acquitted her in his death thanks in part to testimony from Kevin Cooney, who witnessed the shooting.

Meanwhile, both Cooney brothers told the jury that the shooting of Kevin Cooney was not their mother’s fault, that the older brother had pummeled his mother during an argument over his ex-girlfriend, leading to a struggle between the two over a gun.

Prosecutors said the siblings’ version of events was not supported by the physical evidence, including crime scene pictures showing their mother with only one significant bruise, on her right breast.

After the trial, jurors indicated to prosecutors that they did not believe Kevin and Christopher Cooney’s testimony because their stories were strikingly similar. Christopher Cooney was not home at the time of the shooting but called 911 for help after receiving a frantic call from his mother.

The jury found Linda Cooney, 66 at the time, guilty of attempted murder and other charges, but her conviction was overturned three years later by the state Supreme Court, which ruled that jurors should not have been allowed to hear evidence tying the gun to the earlier shooting. A new trial is set to begin later this year.