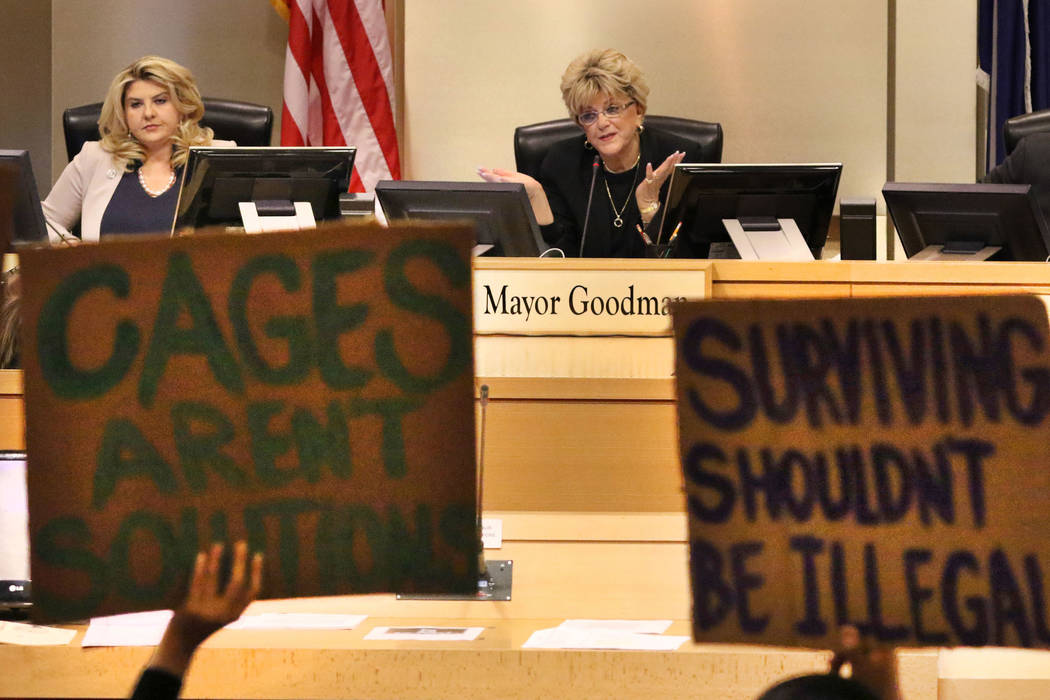 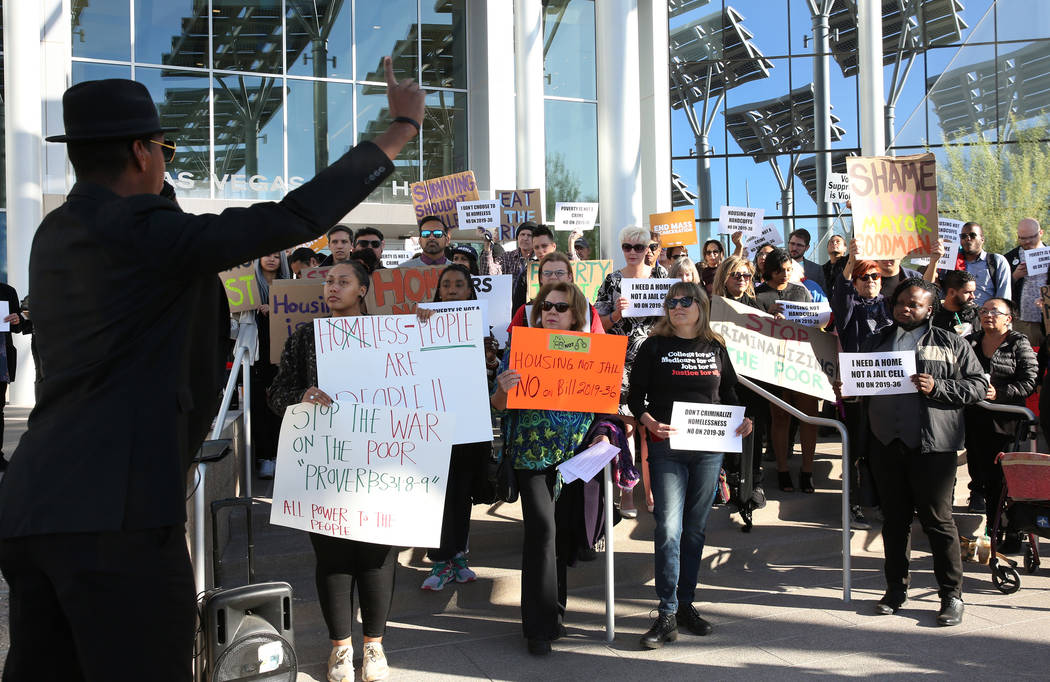 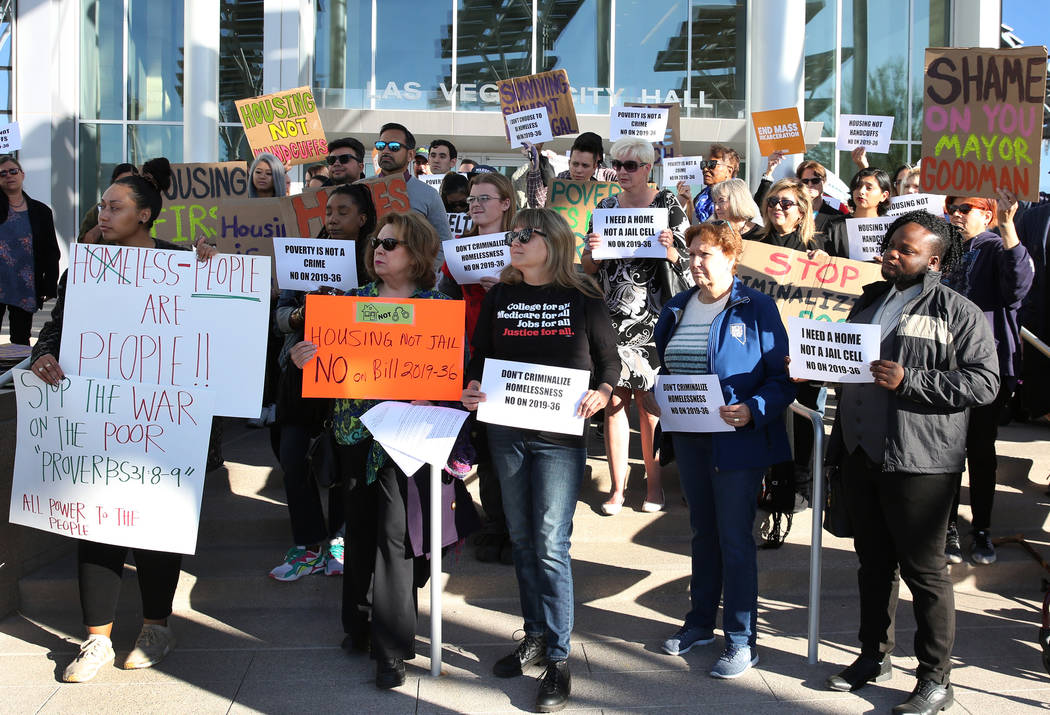 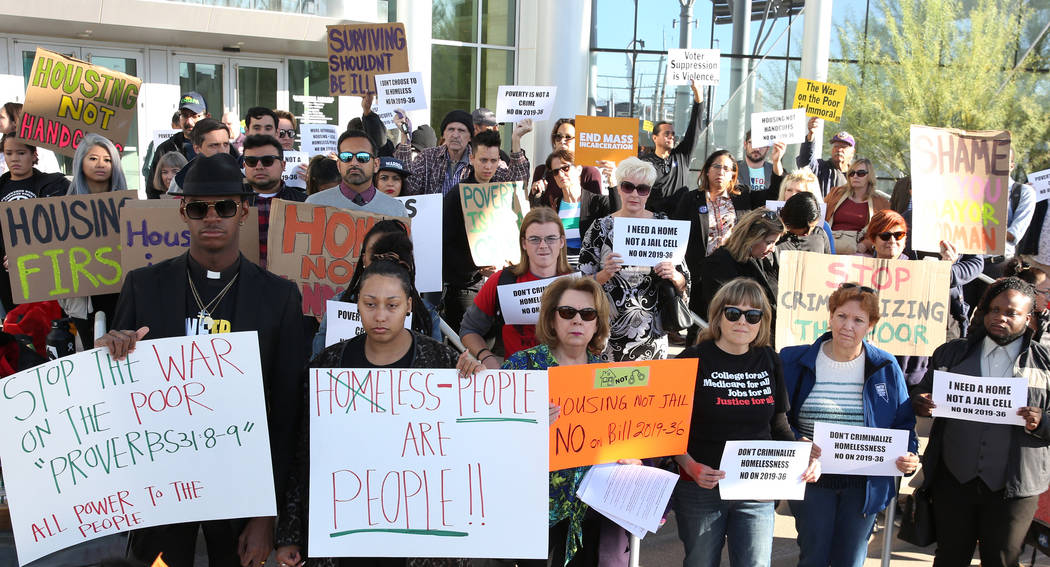 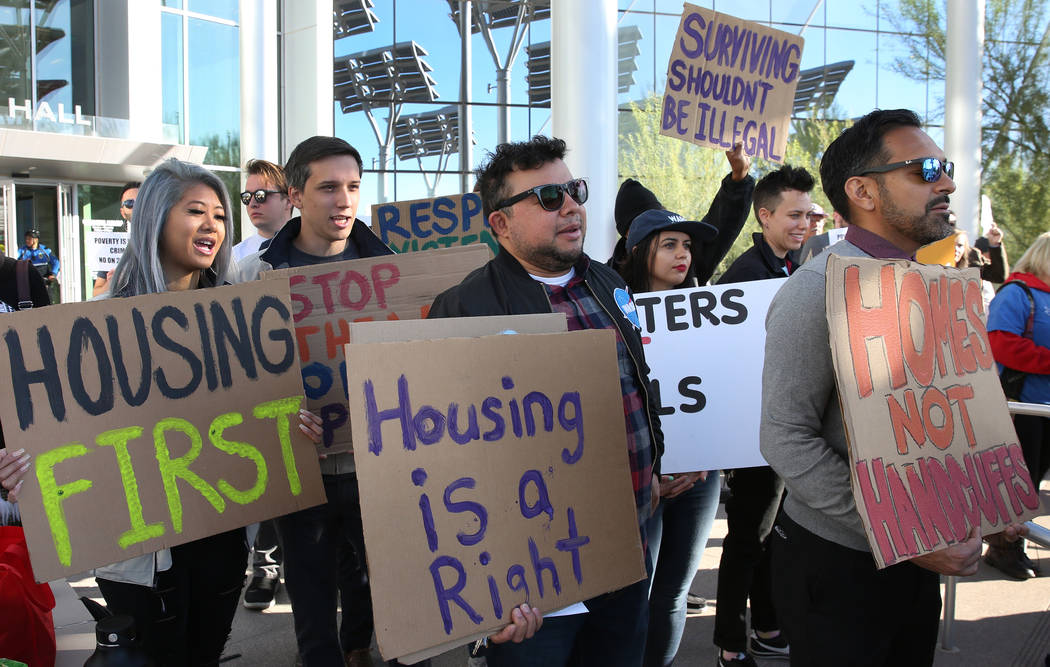 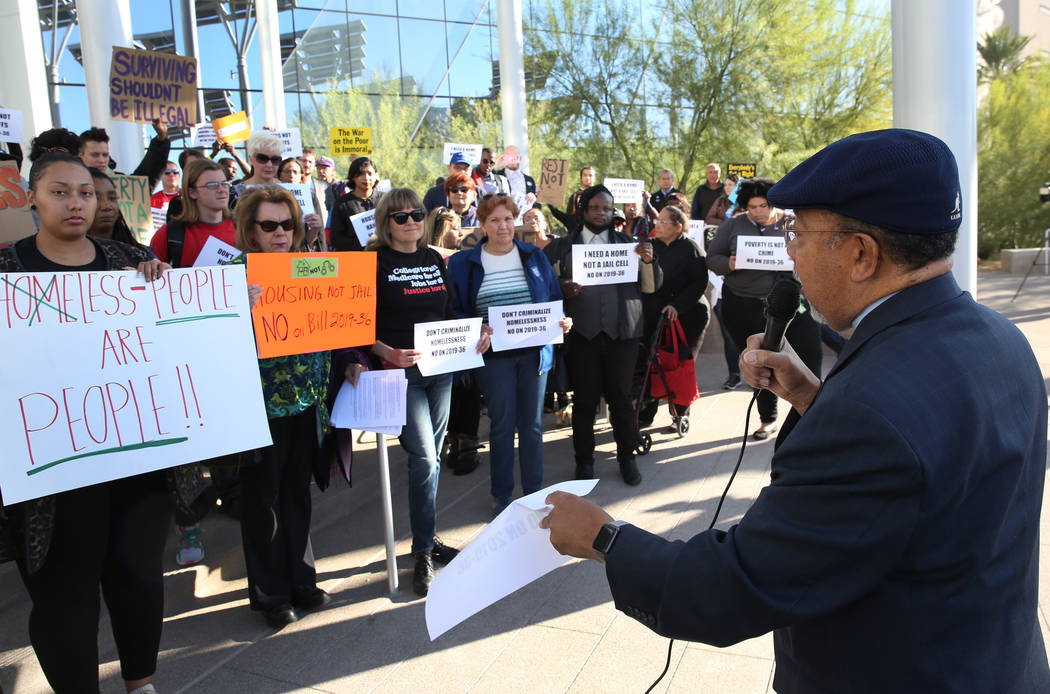 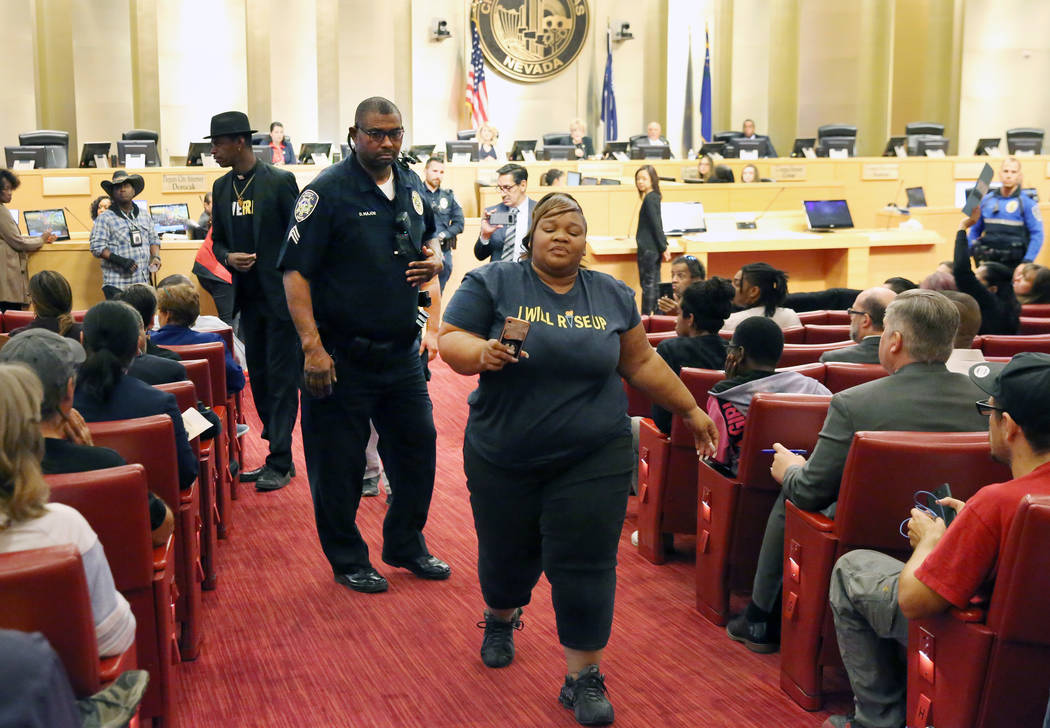 A protester was escorted out of the council meeting where people were protesting against the city council's controversial ban on homeless camping on Wednesday, Nov. 6, 2019. (Bizuayehu Tesfaye/Las Vegas Review-Journal) @bizutesfaye 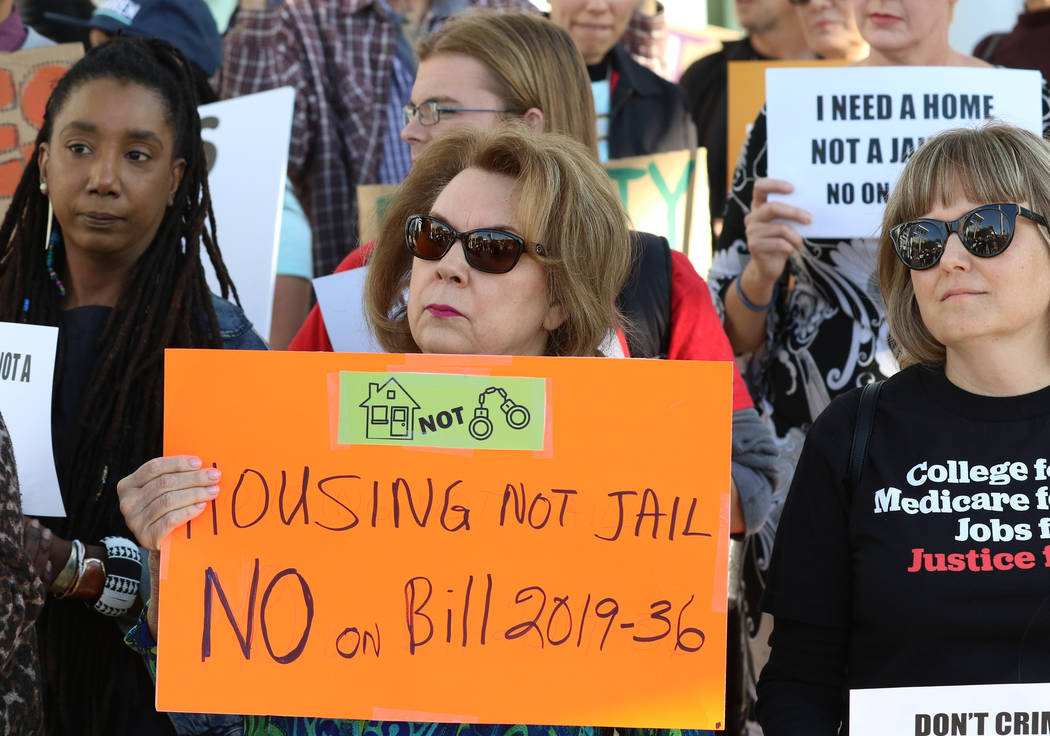 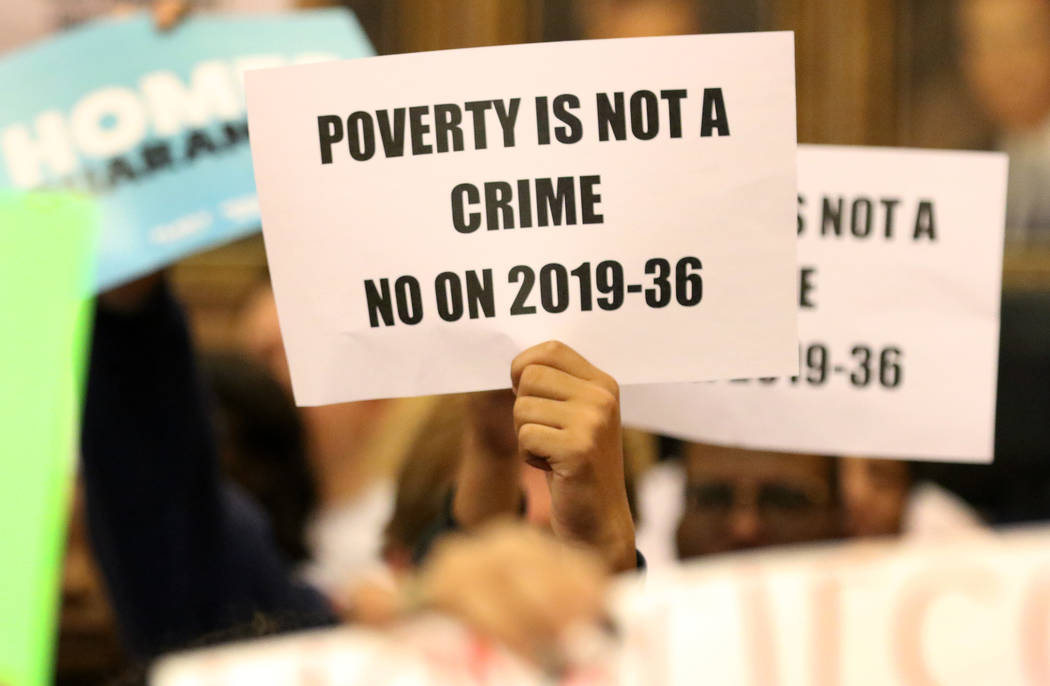 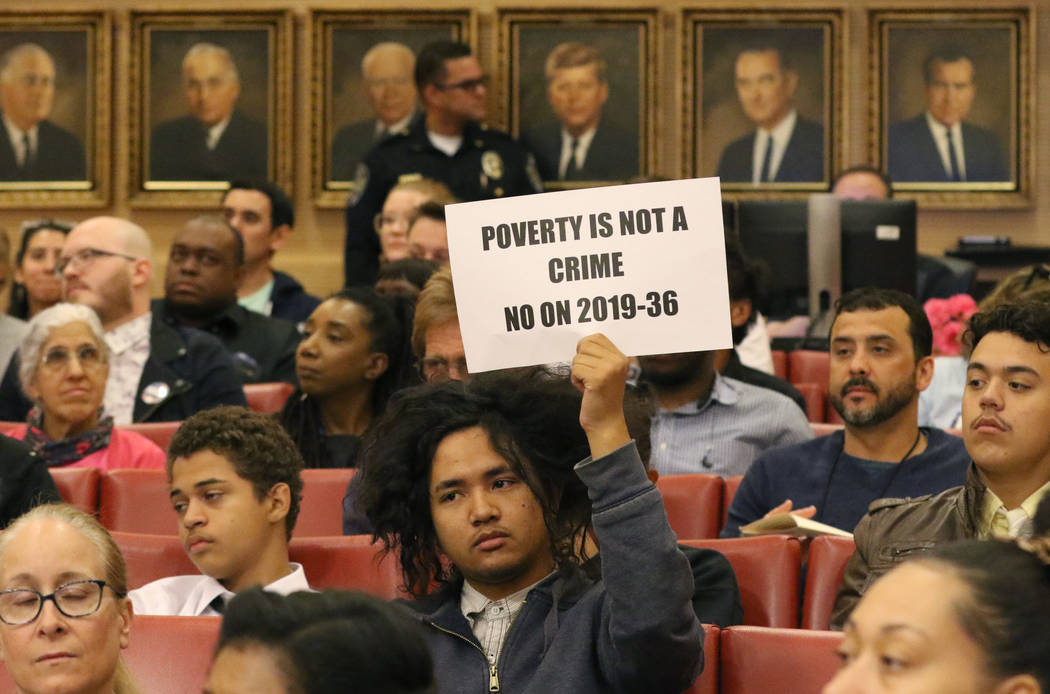 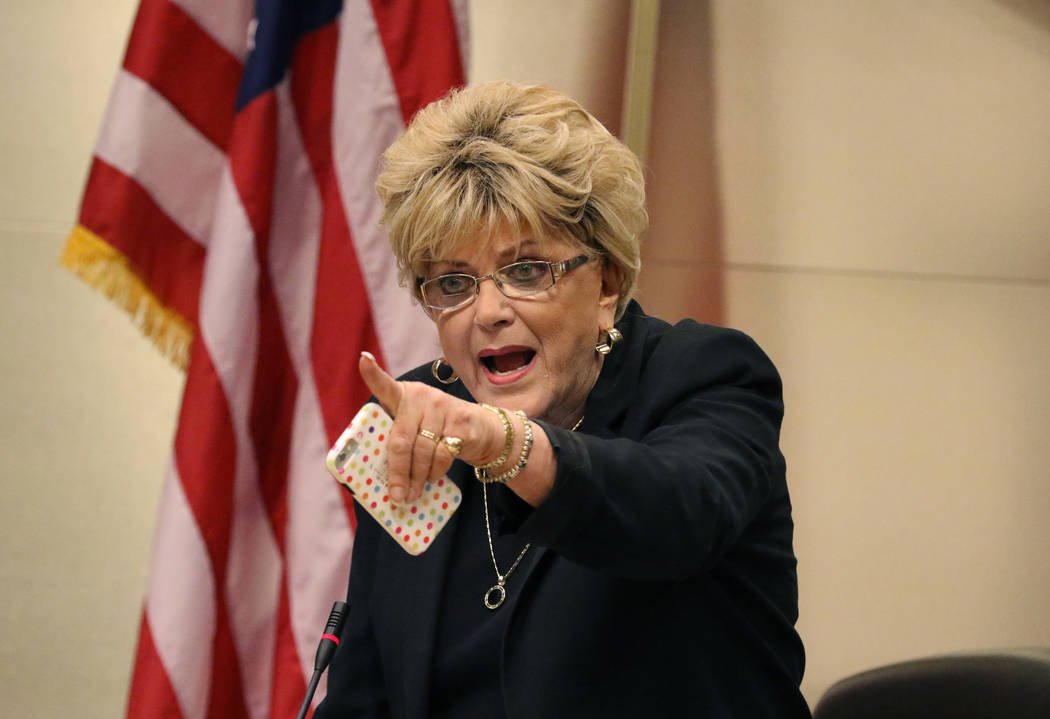 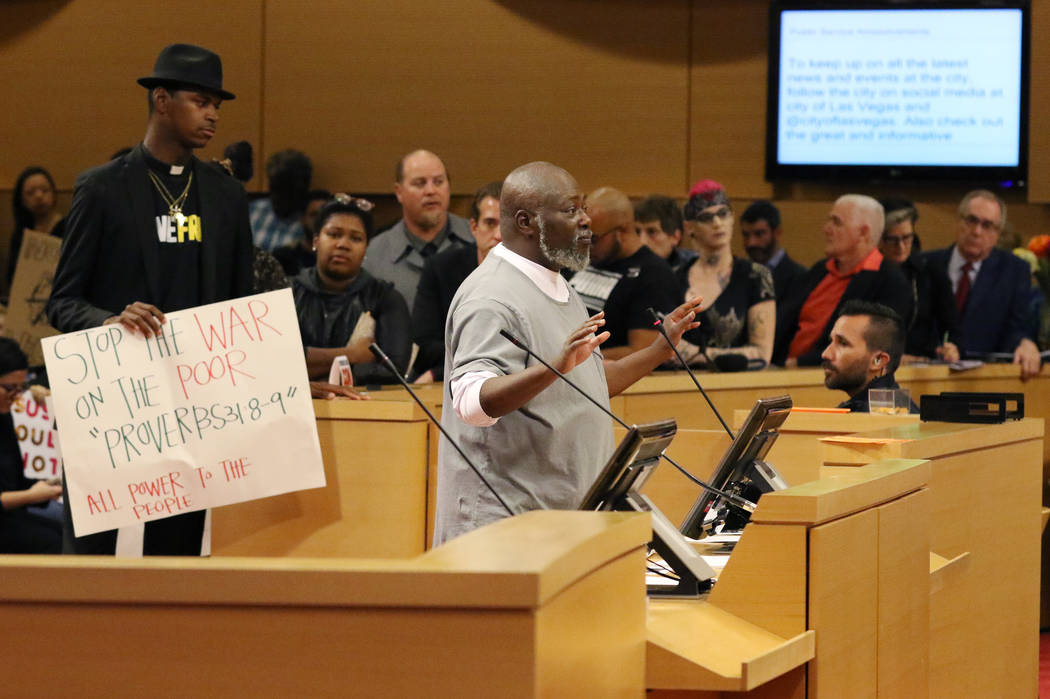 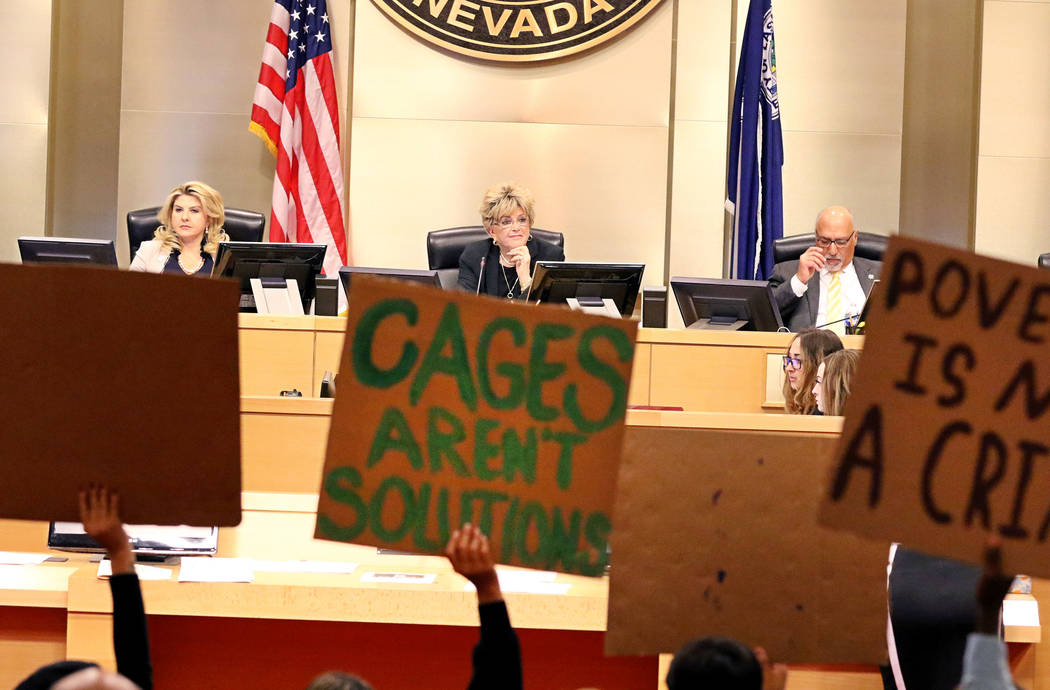 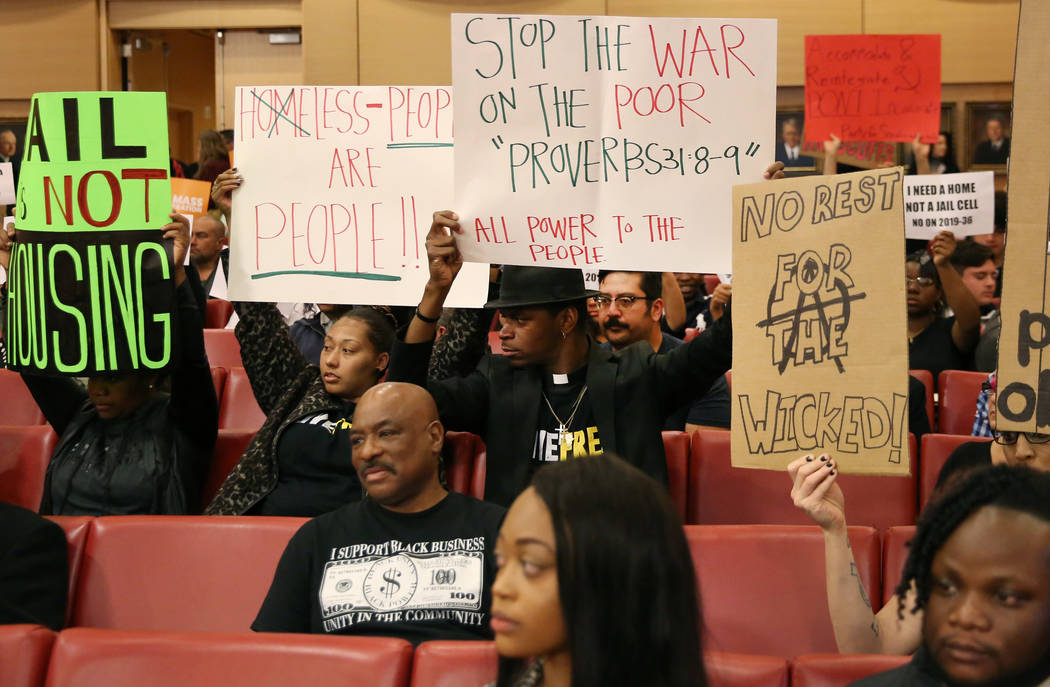 The Las Vegas City Council on Wednesday passed a controversial ordinance that will ban people from camping and sleeping in public areas downtown and in residential areas if there are beds free at established homeless shelters.

Under the new ordinance, violators could be charged with a misdemeanor crime, punishable by up to six months in jail and/or a $1,000 fine. It will go into effect on Sunday, though the criminal provision will not be enforced until Feb. 1.

Mayor Carolyn Goodman made a passionate plea for action before the vote, lamenting how 20 years of talks since her husband, Oscar, was the mayor, had led to no progress.

“This is the beginning seed to build something that will flourish,” she said. “This is flawed, but it is a start.”

Las Vegas officials said the ban, approved by a 5-2 vote, is an effort to beat back an explosion of encampments downtown and compel homeless individuals to accept help and seek shelter — not put them in jail. Camps cause public health and safety risks throughout the city, officials added.

But opponents called it tantamount to criminalizing the most vulnerable population in favor of business interests. The law ignores the roots of the problem and will be both costly and inhumane, they said.

“This is the most disgusting and embarrassing policy I have ever seen,” said Annette Magnus, the executive director for Battle Born Progress, a liberal-leaning activist group.

The council meeting was often contentious, with Mayor Carolyn Goodman struggling at times to maintain control as protesters yelled out both in unison and individually, leading to at least a handful of people being removed from the City Council chambers.

Far more opponents than supporters addressed policymakers, calling for long-term regional solutions such as increased affordable housing and boosts to mental health and substance addiction treatment. Critics of the bill argued that it will ensnare individuals into a cycle of incarceration.

City officials said they were working on long-term solutions, despite funding and resource shortfalls, but stated that encampments must be addressed immediately as they present public health and safety risks. City Attorney Brad Jerbic argued that the criminal component of the law was the only way to enforce it.

Authorities will use discretion in enforcement, according to Jerbic, with only blatant violators who refuse to move subject to arrest. The bill also contains several exemptions including for medical emergencies and people with disabilities.

Service providers denounced the ordinance in public comment, asking councilmembers to delay their vote to include them in the conversation.

Councilman Brian Knudsen and Councilwoman Olivia Diaz were the two holdouts. Knudsen vowed to do more to address the issue, banking on his experience in the nonprofit sector, while Diaz said she believed the city should first increase social services.

Clark County Deputy Public Defender John Piro said it was inaccurate to suggest the bill would not have fiscal impacts, adding that it costs $170 per day to house an inmate at the county detention center. The money, he said, would be better spent elsewhere.

Others questioned whether the bill might hurt vulnerable groups like veterans, LGBTQ youth and the working homeless.

“If we can build stadiums, then we can build housing for the homeless,” said George Allen, a home-care worker who said he is homeless.

But attorney Pauline Ng Lee said that detractors were ignoring a major clause in the ordinance: If shelters were full, it would not be enforced. Lee, one of a few dozen supporters who spoke Wednesday, added that the bill would represent progress toward protecting the homeless.

“This is a practical first step,” she said.

Also among the supporters were several downtown business organizations, such as the Las Vegas Chamber of Commerce, the Fremont Street Experience and the Downtown Vegas Alliance, who say they are struggling to keep customers because of the encampments around their businesses. Representatives of the Las Vegas police also said they would support the city if the ordinance passed.

“We appreciate the intent behind the ordinance,” Sgt. Chuck Callaway said.

More than 100 critics of the bill, including progressives and faith leaders, held a rally and press conference outside City Hall before the meeting. Written in chalk on the sidewalk leading up to the steps of City Hall were colorful messages to Goodman: Homes not handcuffs. Where’s your empathy? Where’s your compassion?

The proposed ordinance has drawn attention nationally. Nearly all the top Democratic presidential candidates have criticized the proposal. It also faces possible legal hurdles, although the city’s lawyers have said they believe it is defensible.

Beyond legal questions, the logistics and effectiveness of a ban have been called into question: There are roughly 2,000 beds available between city and nonprofit social services on any given night in Southern Nevada to accommodate more than 5,500 homeless people on the streets, according to this year’s homeless census.

Jerbic said Wednesday the city was seeking to increase the number of beds available for homeless in the city.