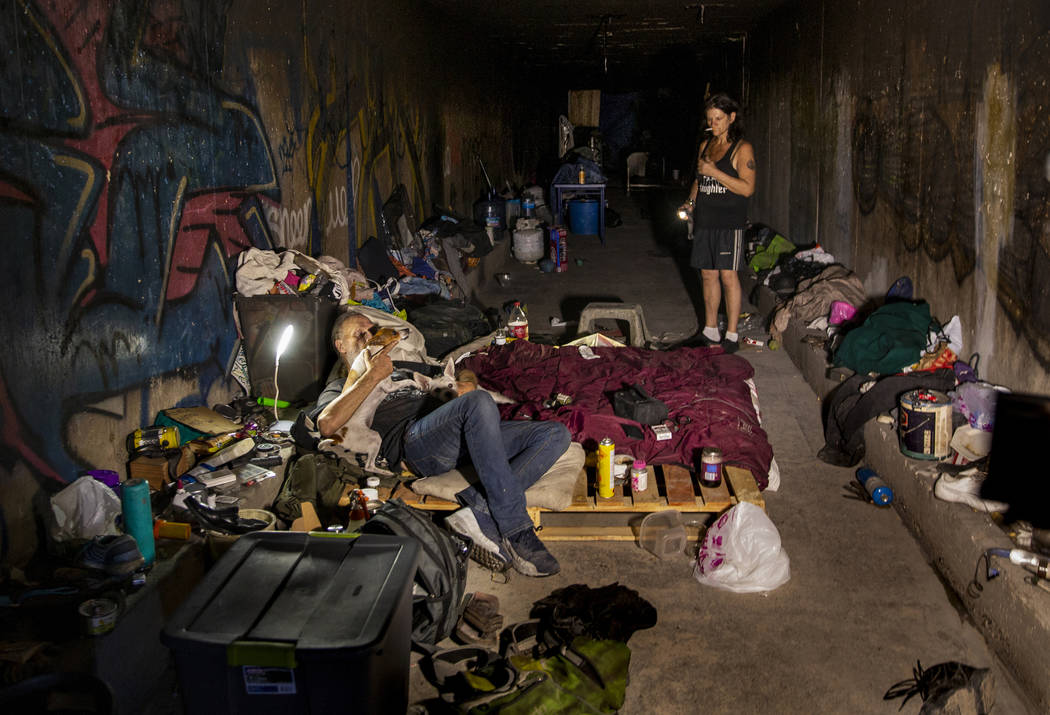 A homeless couple is pictured at home in the drainage tunnels near Dean Martin Drive in Las Vegas on Tuesday, May 14, 2019. (L.E. Baskow/Las Vegas Review-Journal) @Left_Eye_Images 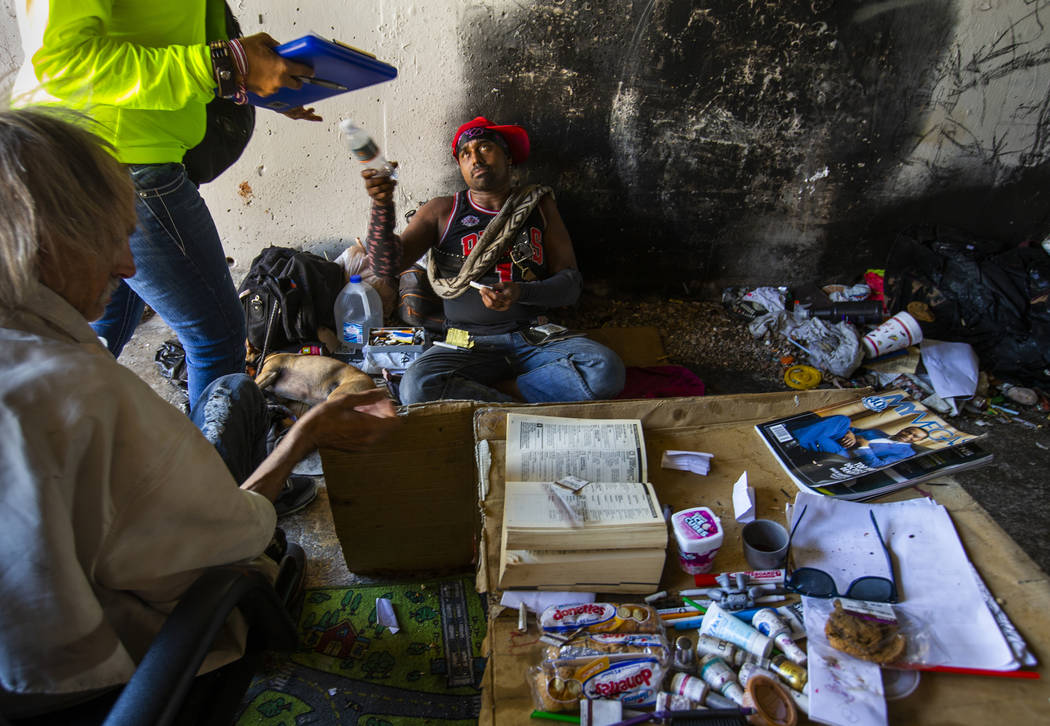 Dwain Butler II, foreground, and Victor Shelton, right, are contacted by HELP of Southern Nevada employees offering Hepatitis A and B vaccines after a spike in acute cases at the homeless camp located near a drainage ditch off south Jones Boulevard near Tropicana Avenue on Tuesday, July 2, 2019, in Las Vegas. HELP of Southern Nevada partnered with the Southern Nevada Health District and Metropolitan Police to administer the vaccines. (L.E. Baskow/Las Vegas Review-Journal) @Left_Eye_Images 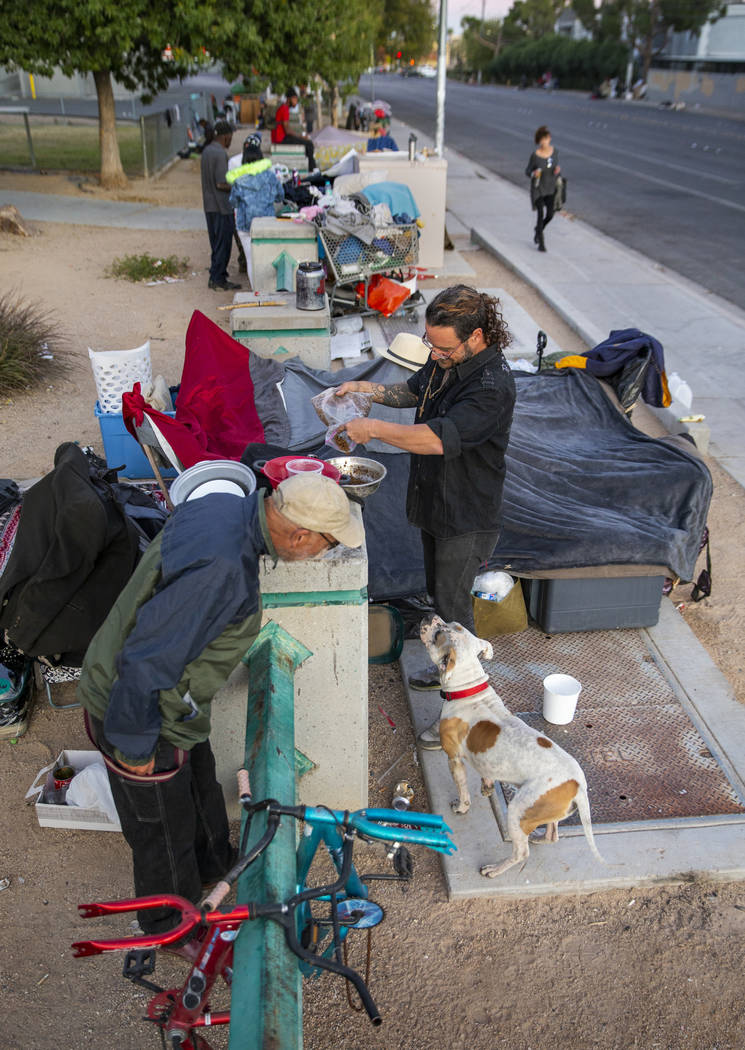 Kit Rogers, left, talks to Karma the dog as her owner James Miller pours her some dinner at a homeless encampment at Molasky Family Park off E. Twain Ave. on Monday, Nov. 4, 2019, in Las Vegas. (L.E. Baskow/Las Vegas Review-Journal) @Left_Eye_Images 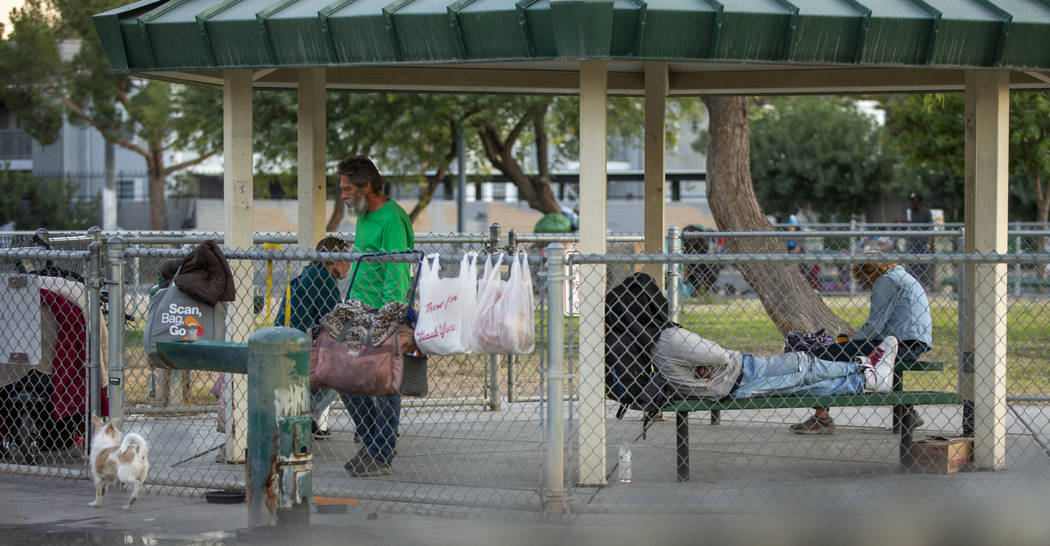 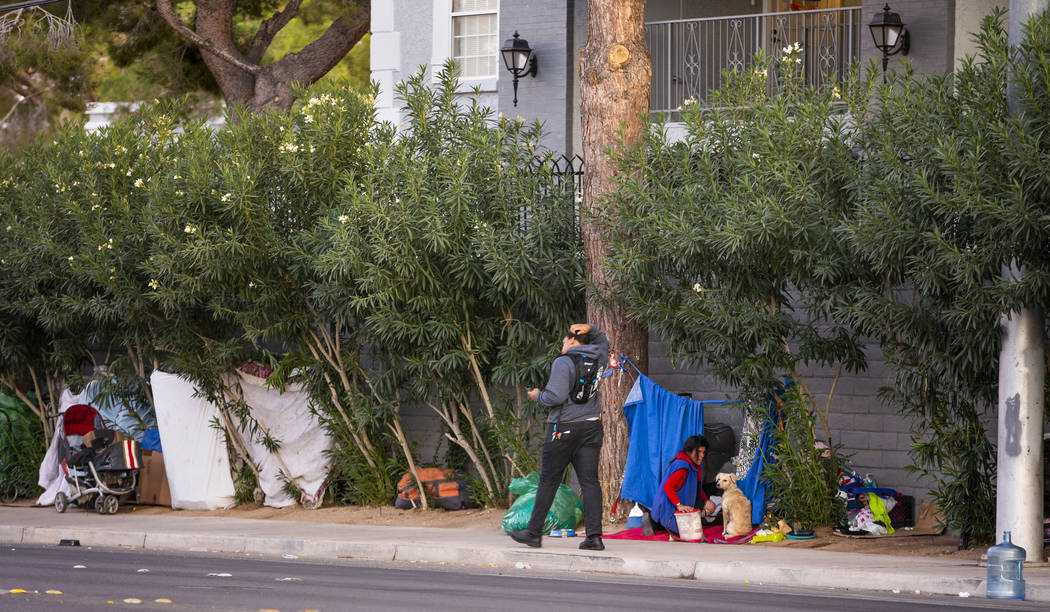 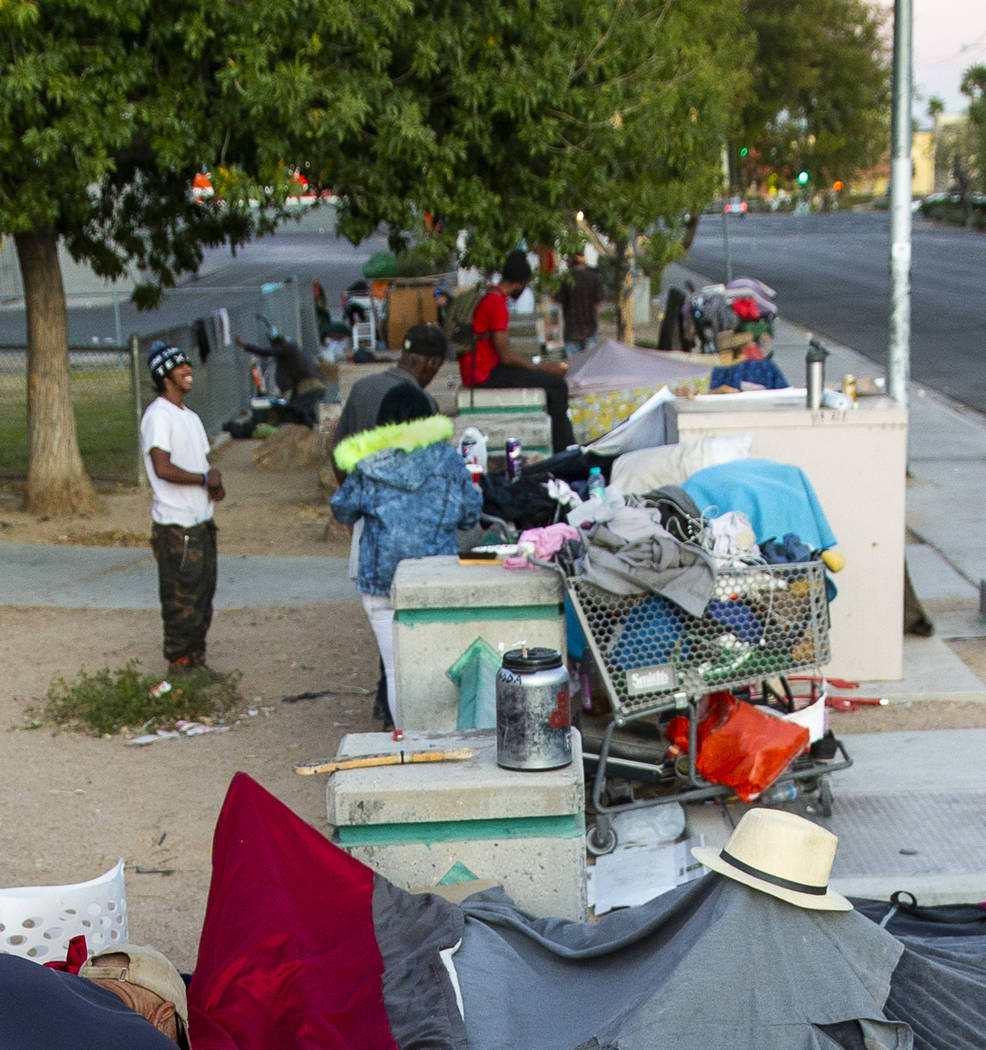 A myriad of possessions are gathered about a homeless encampment at Molasky Family Park off E. Twain Ave. on Monday, Nov. 4, 2019, in Las Vegas. (L.E. Baskow/Las Vegas Review-Journal) @Left_Eye_Images

The city of Las Vegas’ Courtyard center for the homeless is being overwhelmed, and officials believe other local jurisdictions are contributing to the problem by routing people to the one-stop, 24/7 facility near downtown.

To combat the rising numbers of homeless in the downtown area, the City Council on Wednesday will consider a controversial proposed ordinance that would make camping and sleeping in public and in residential areas throughout the city a misdemeanor crime when beds are available at established homeless shelters.

The move is aimed at reducing the growing number of homeless campers downtown and encouraging them to seek help, though critics say it won’t make a difference because available shelters and resources are already strained beyond capacity.

The Courtyard, where the homeless can sleep in a secure open-air space and access a range of services, has more than 300 or 400 people staying there on a typical night — far more than the 221 sleeping mats available. The site on Foremaster Lane is designed to serve 800 when the build-out is completed in late 2021.

The debate over the ordinance will play out as officials from Clark County and other municipalities launch a new effort to craft a regional approach to deal with the estimated 14,000 homeless believed to be in shelters or camping outside in Clark County this year. It will be the third attempt to hammer out a coordinated effort and comes months after the last committee formed to tackle the issue and other regional matters voted to disband.

‘We do not have the capacity’

It also comes amid growing tensions between Las Vegas and the county over whether other jurisdictions are taking advantage of the one-stop Courtyard Homeless Resource Center established last year by the city.

In a Sept. 11 letter to the county and other local municipalities, Las Vegas officials said the Courtyard Homeless Resource Center resources were being strained by clients from outside the city.

“The Courtyard was developed to provide services to limited areas in the urban core of our city. The Courtyard cannot physically support participants from outside of the city, nor should the City of Las Vegas citizens be expected to bear those additional costs originating from outside of our boundaries,” Mayor Carolyn Goodman and City Manager Scott Adams wrote.

Las Vegas community services administrator Jocelyn Bluitt-Fisher made a similar point in a March 5 email to city employees: “We also need to be very cautious about promoting the project to other law enforcement agencies and other jurisdictions,” she wrote. “We do not have the capacity or the resources to handle the needs of all the homeless in Southern Nevada. We cannot have the Henderson Police Department bringing clients from Henderson to the City of Las Vegas for services.”

The letter invited officials in the other jurisdictions to tour the facility and consider building something similar in their own backyards.

The communique drew a testy response from the Clark County Commission, which said in a Sept. 30 letter that a review of six months of records showed that only 30 people served by county homeless outreach staff were taken to the Courtyard — all at their own request.

It also noted that homeless individuals typically do not have an address with a specific jurisdiction and the county spends more than $47 million annually providing transitional housing and other aid to the unsheltered.

County officials asserted that they are the “regional provider of indigent services and will continue implementing and funding regional services with evidence-based outcomes to support a healthy system of care from ENTRY to EXIT” that provides not just overnight shelter but also transitional housing and permanent supportive housing.

“While the county recognizes the effort of the Courtyard program as part of the service array, the Courtyard is an entry point without a full complement of solutions to support a permanent exit from the system,” commissioners wrote.

A Boulder City police official acknowledged that officials sometime direct homeless individuals to the Courtyard. Officials in Henderson and North Las Vegas did not directly respond to the charge.

The other cities spend far less addressing the issue than the $35.1 million Las Vegas poured into homeless-related services last year, which include outreach, fire, enforcement and community services.

The city of Henderson doesn’t track homeless costs closely, but spokeswoman Kathleen Richards said it provided about $556,000 this year to nonprofits such as HopeLink of Southern Nevada, St. Jude’s Ranch for Children and the Salvation Army. Henderson police Lt. Kirk Moore said that the department also is looking at establishing an outreach group to assist at-risk residents.

The city also contributed about $110,000 to regional efforts to address the issue, including the homeless census, the Homeless Management Information System that tracks access to services and inclement weather shelters, she said. But that spending is mandated by an interlocal agreement among the county, its municipalities, and nonprofit entities to qualify for certain federal funding for homeless services.

In September, Boulder City created a task force to “get ahead of the eight ball” and address the growing problem of homeless camping on city parks and other land, Parks and Recreation Manager Julie Calloway said. The city is also looking at strengthening its city code to address public nuisance crimes like defecating and urinating in public and requiring a permit to camp in underveloped areas for 48 hours.

There is a food pantry available to residents who can show they have lived in the city for 30 days, and the nonprofit Emergency Aid of Boulder City will provide bus passes or help prevent homelessness by paying for rent or medication for residents who have lived there six months, Calloway said.

Mesquite relies on churches and local charities to help provide rental aid and bus passes to the homeless, a city representative said.

North Las Vegas has one police officer dedicated to homeless services and issues. The city did not details on the resources it devotes to the problem.

Clark County has focused its recent efforts on creating more affordable housing, dedicating up to $9.8 million in marijuana business licensing fees to the task this year.

A bill that would have dedicated $20 million annually for affordable housing in both the county and Las Vegas was presented to the Legislature this year, but the funding was later stripped from the bill and replaced with language mandating that Clark County and its cities instead form the working group to study strategies to reduce homelessness and to explore potential sources of funding.

The new group will attempt to forge consensus where other similar committees have failed.

In the early ’90s, the city and county invested in the Mobilized Assistance and Shelter for the Homeless (MASH) project, each committing $2.5 million toward the facility in what is now the so-called Corridor of Hope. The unit, a one-stop regional crisis and intervention center with 1,000 beds, supportive services and housing programs, was abandoned in September 2002, when the operator bowed out at the end of its contract, citing fundraising woes.

In 1999, state lawmakers created the Southern Nevada Regional Planning Coalition in part to develop a regional approach to homelessness. It disbanded earlier this year after concluding that its efforts were largely duplicative.

Thom Reilly, the chancellor of the Nevada System of Higher Education, who served as county manager from 2001 to 2006 and chaired the task force at the time, said many of the same issues that foiled that effort are still preventing cooperation.

“It’s clear that not everybody is on the same page on this issue,” he said. “It does seem like the city of Las Vegas is going into a different direction, and not all the jurisdictions are interested in coming to the table.”

3
New unemployment filers will need to verify ID through vendor