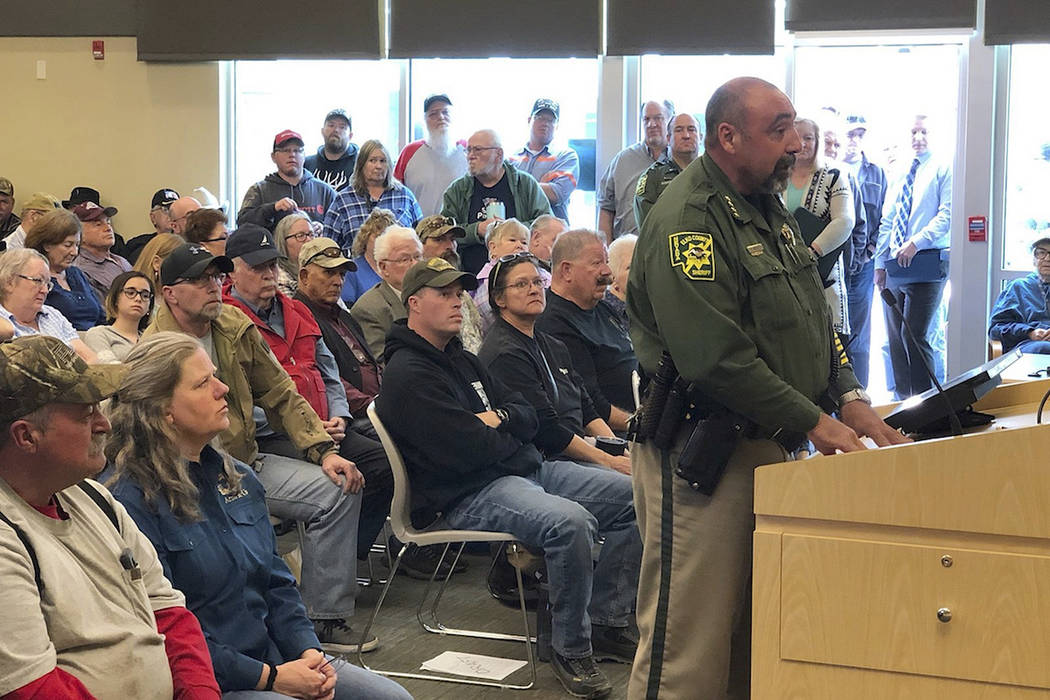 The Lyon County Commission on Thursday followed the Nye, Douglas and Elko county boards voting to tell Democratic Gov. Steve Sisolak and the newly Democratic-majority state Legislature they believe gun owners should be free to share or sell weapons without undergoing strict new background checks due to go into effect in January.

“Do we stand up now, or do we wait and stand up when they come to get the guns?” said Demar Dahl, a northeast Nevada rancher and Elko county commissioner who on Tuesday supported a resolution declaring Elko County a “sanctuary for the Second Amendment” right to bear arms.

But elected officials in Nevada’s two largest urban areas, Las Vegas and Reno, say they have no plans to take similar action.

“I believe in an individual’s right to bear arms, and I support a citizen’s right to legally possess firearms,” Washoe County Sheriff Darin Balaam said. “However, we also have a responsibility to protect the public from criminal misuse of firearms.”

The Las Vegas Metropolitan Police Department, headed by elected Clark County Sheriff Joe Lombardo, said in a statement it is obliged “to uphold and enforce” city, county and state laws.

Dahl said in a telephone interview he thought hard about his vote.

“I don’t know how many emails and phone calls I got, but I only got one that said, ‘Don’t do this,’ ” he said. “I concluded that when something as important as our Second Amendment is taken away from us and our guns are confiscated, it happens a little bit at a time.”

Don Turner, head of the pro-gun Nevada Firearms Coalition, said sheriffs in at least seven of the state’s 17 counties plan to defy the law that Sisolak signed in February as a memorial to victims of the Las Vegas Strip massacre of October 2017.

Turner, whose advocacy group has National Rifle Association backing, said the Nevada law conflicts with the U.S. Constitution, and agrees that some see it as a step toward a national gun registry.

“The only people who should be concerned are criminals and dangerous people who have no business getting their hands on guns,” she said.

In New Mexico, sheriffs in 25 counties say they won’t enforce a background check law that Democratic Gov. Michelle Lujan Grisham signed this month. Sheriffs in the state’s three most populous counties are among the eight that have said they would enforce the law.

In Washington, sheriffs in about half the state’s 39 counties have vowed not to enforce a gun buyer screening initiative passed by voters last November until courts decide it is constitutional.

Sisolak, who chaired the Clark County Commission when the Las Vegas gunman killed 58 people and injured more than 850, said in a statement that his top priority is safety.

He promised to work with local jurisdictions to ensure that background checks are conducted for private firearm sales and transfers. He said elected officers are sworn to uphold Nevada laws.

Dahl said the 49,000 people who live in Elko County and drive four hours to Reno or three hours to Salt Lake City think differently than Las Vegas, with 2.2 million residents and 40 million tourists a year more than a six-hour drive away.