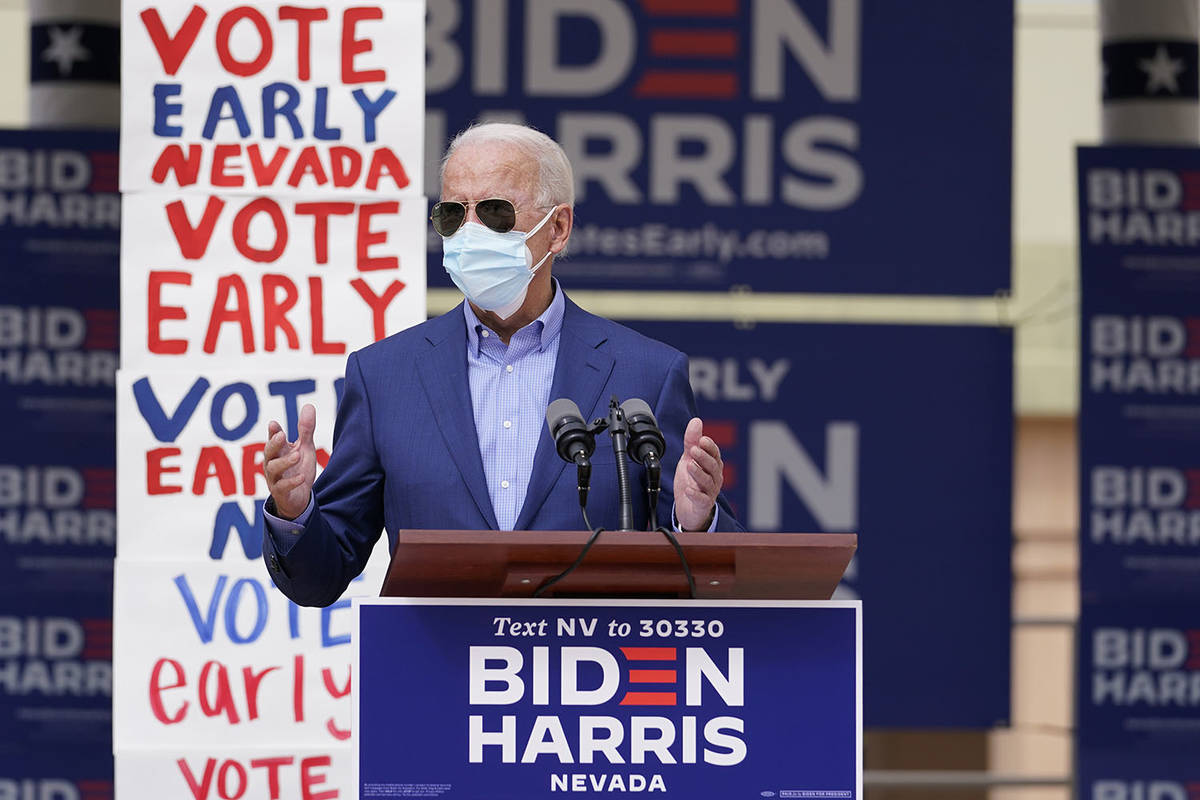 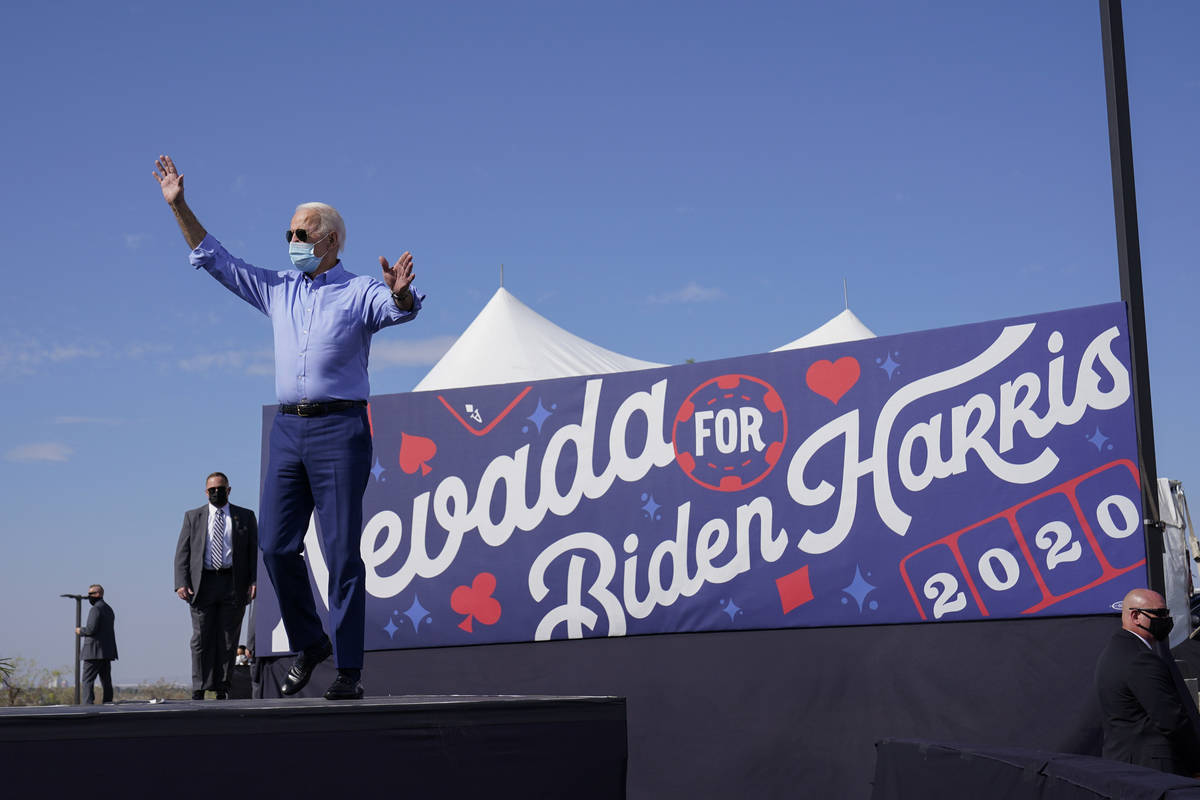 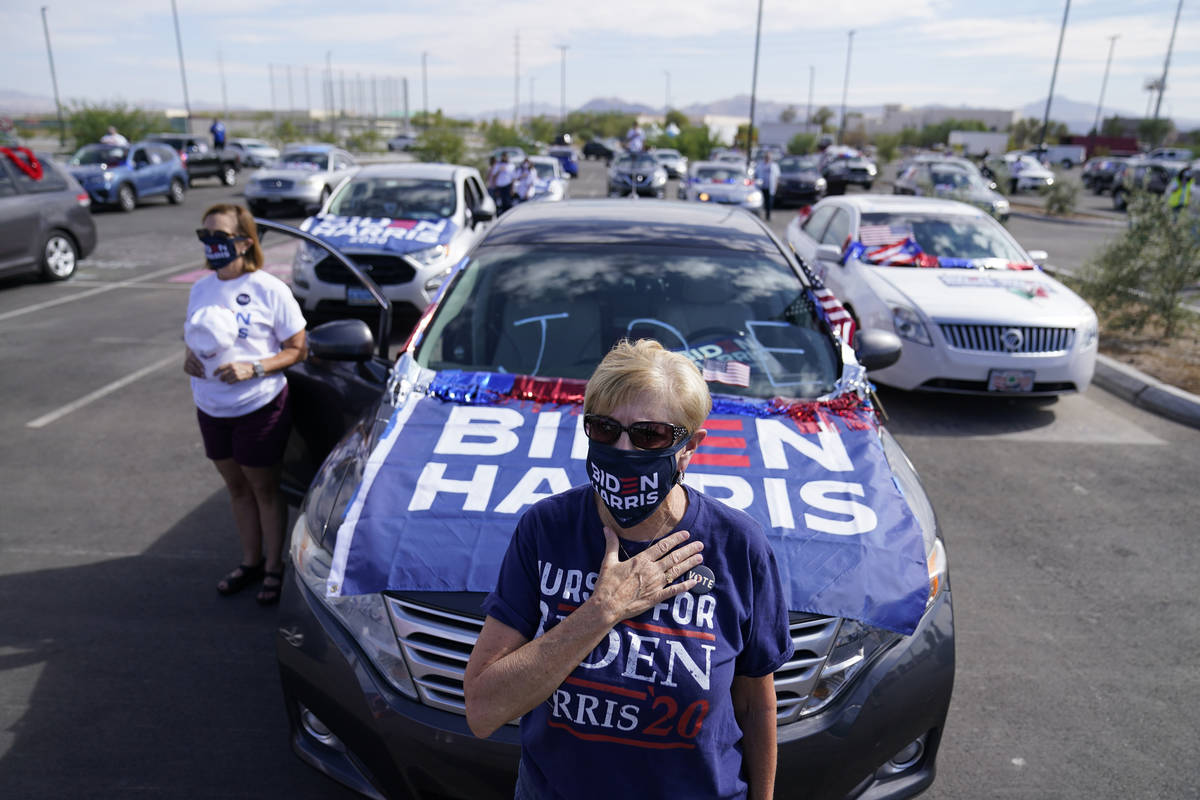 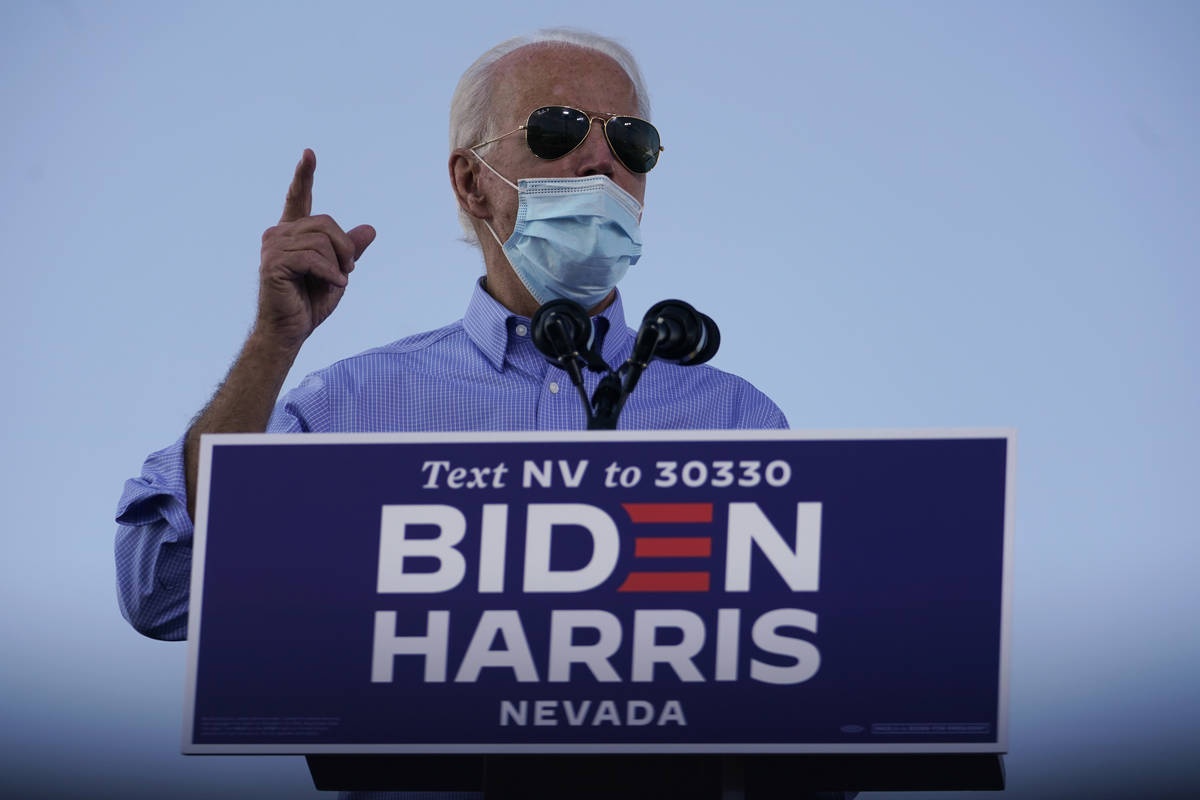 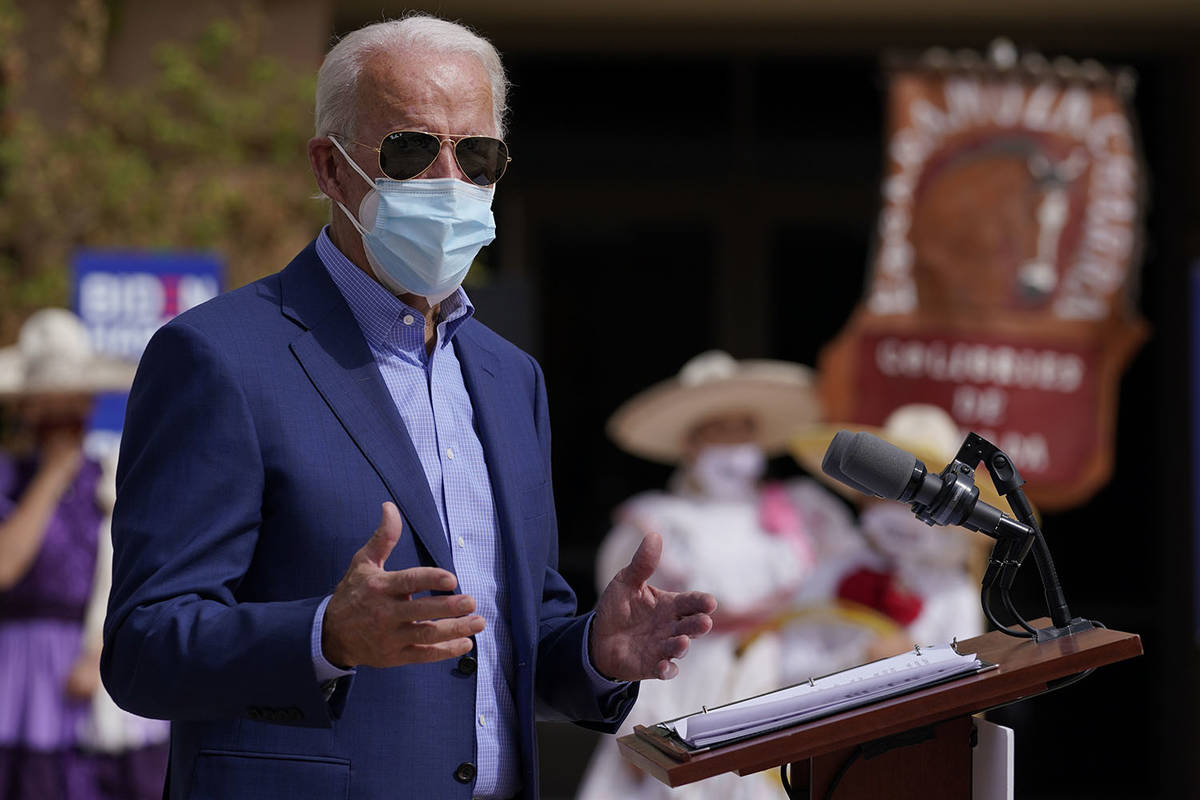 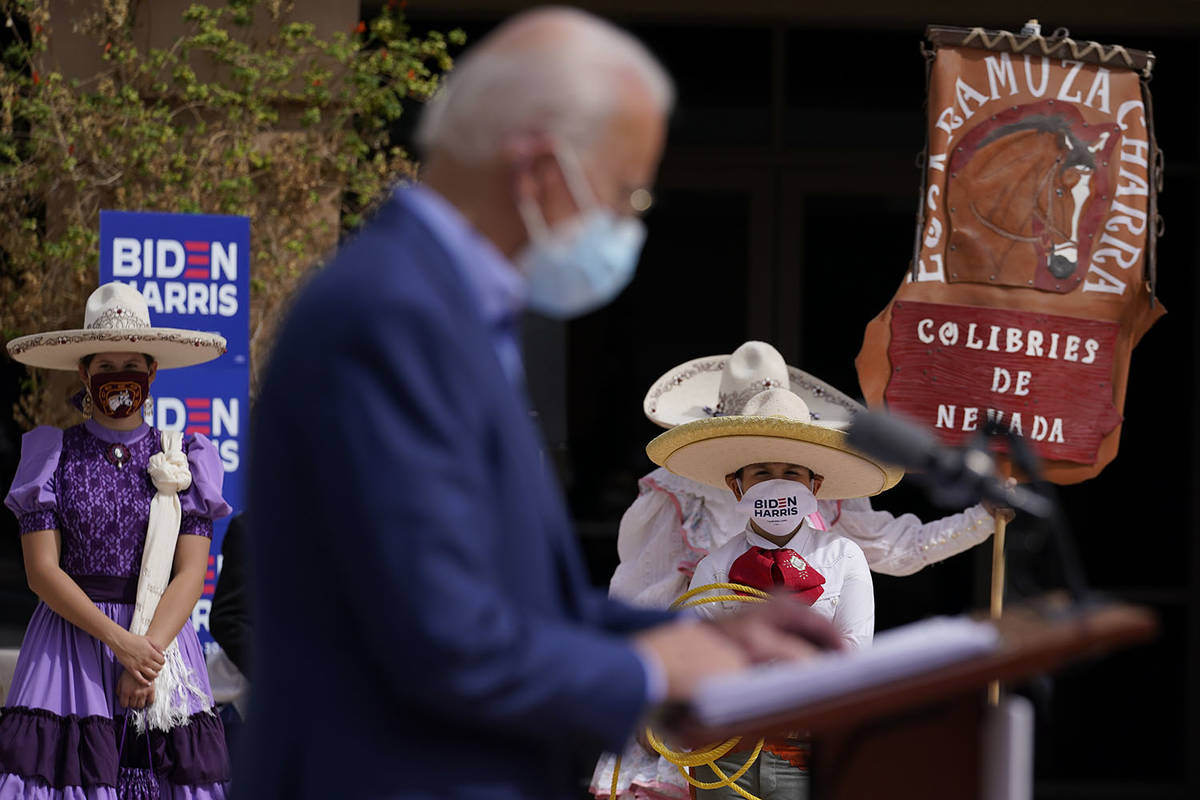 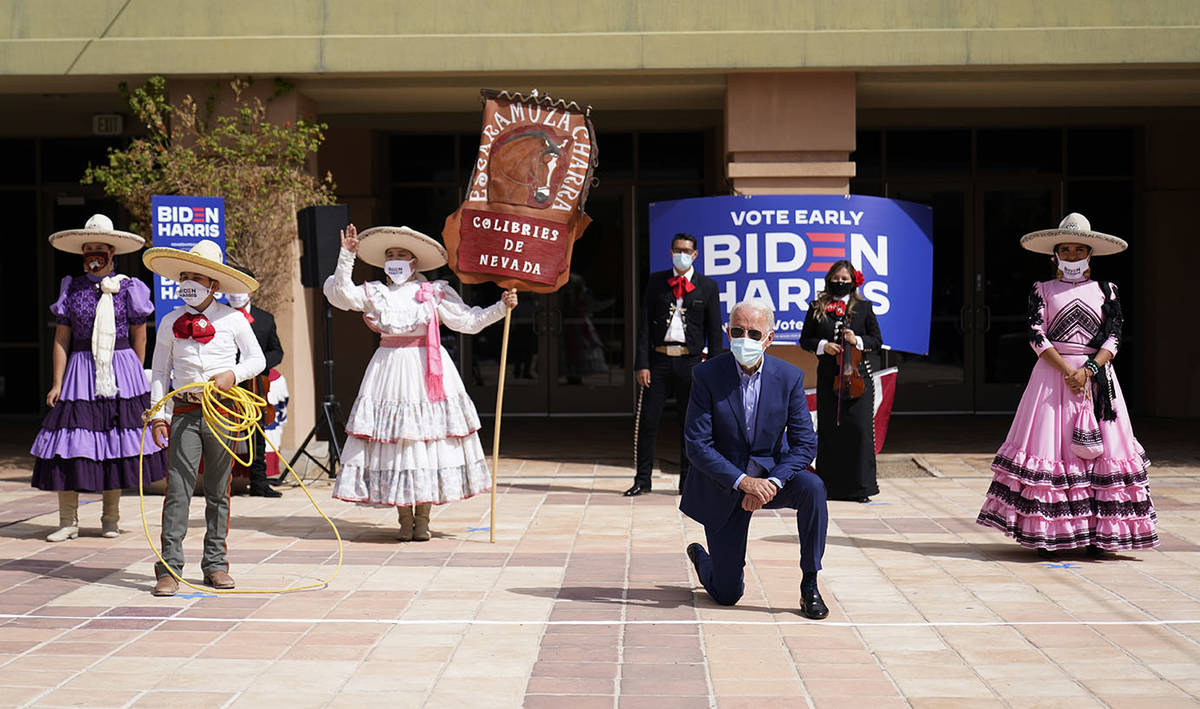 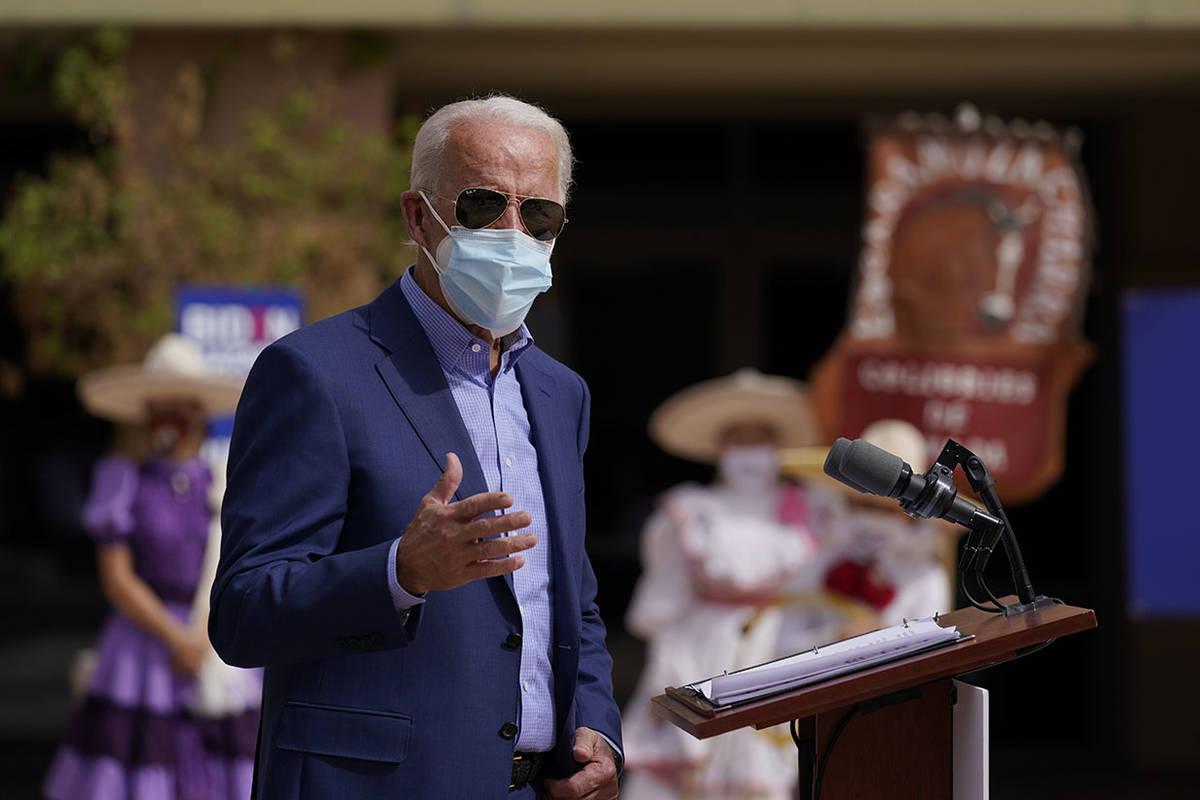 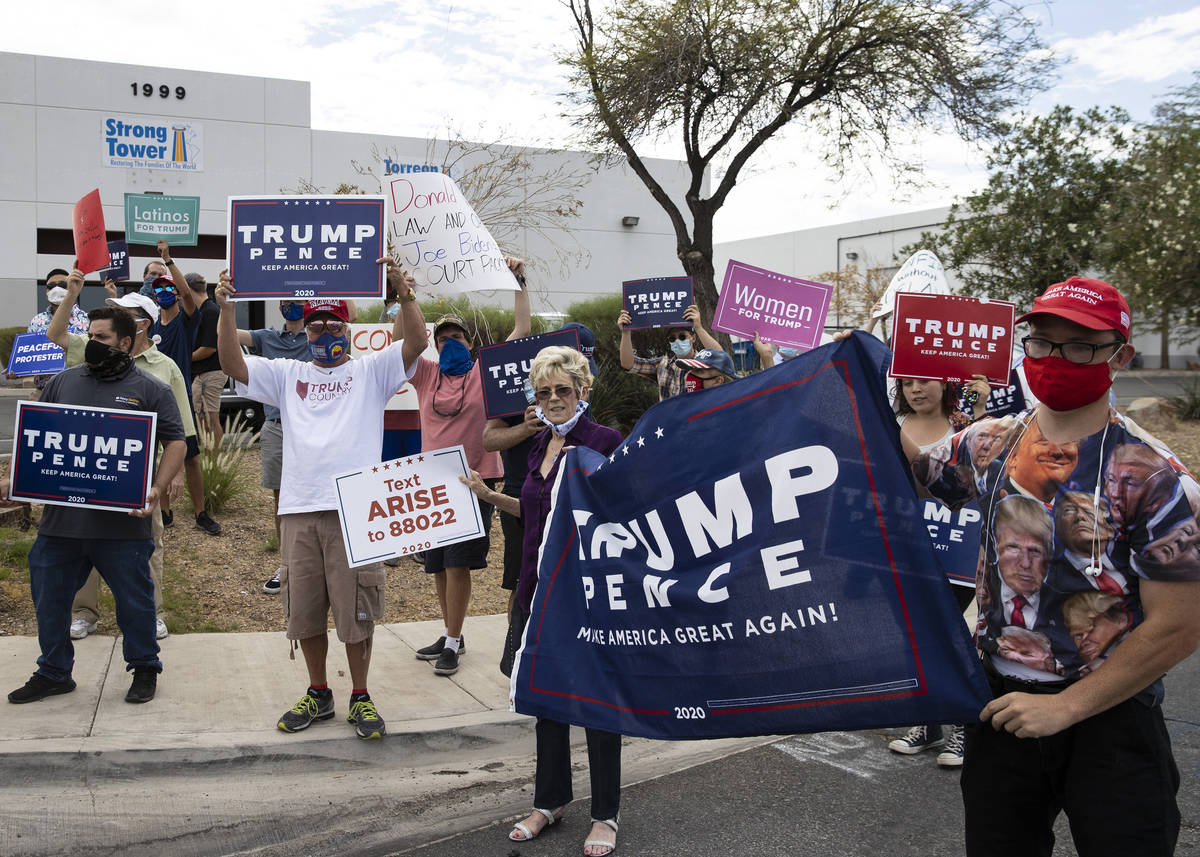 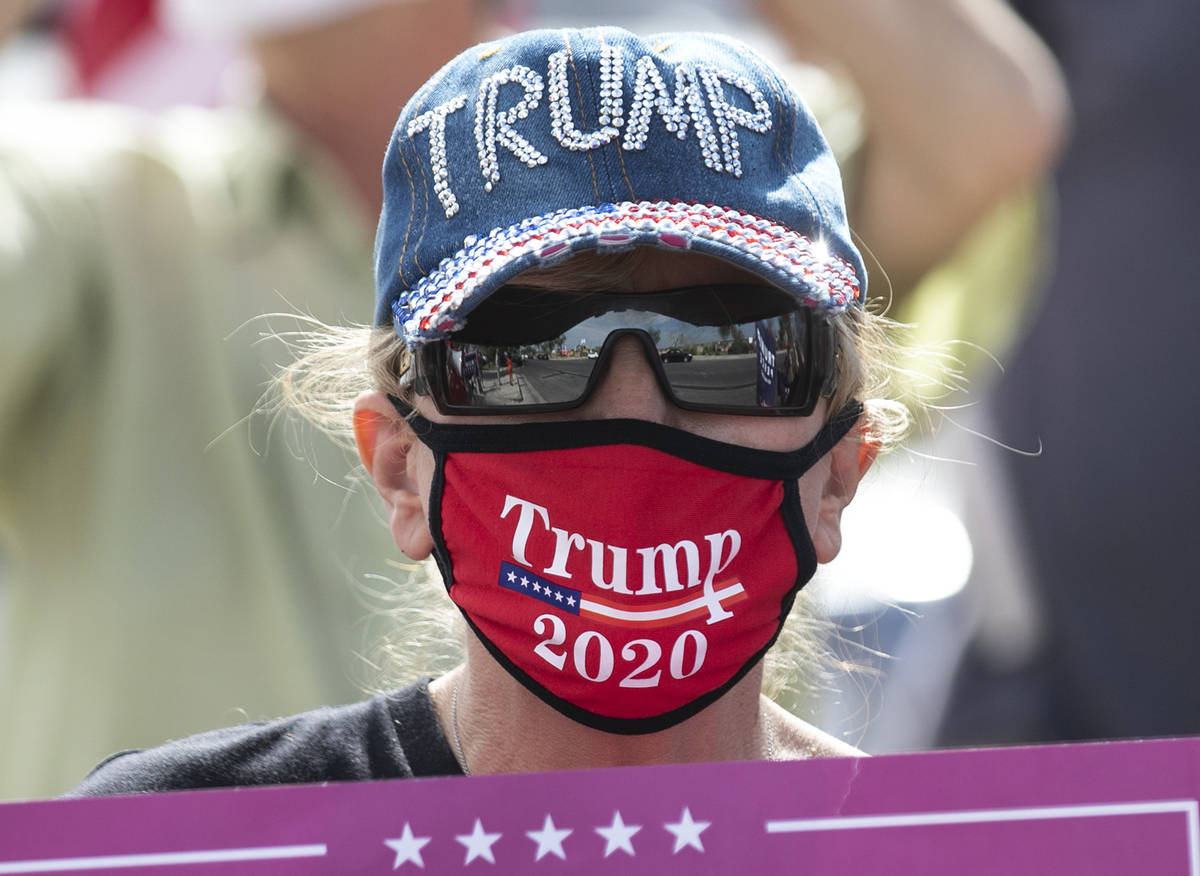 Democratic presidential nominee Joe Biden held a “drive-in rally” Friday at the Southeast Career Technical Academy parking lot in Las Vegas, where he pledged, if elected, to enact policies that would improve the lives of everyday Americans.

“You deserve a president who understands what you’re going through and who sees where you are and where you want to be,” Biden said to a campaign-estimated gathering of 100 cars and 200 people.

Biden, wearing a mask and sunglasses at the outdoor event, repeatedly criticized President Donald Trump’s handling of the coronavirus pandemic, saying he “shows no urgency to help hardworking Americans.”

Trump’s local campaign held a protest of about 30 people just outside the event.

During his 30 minutes on stage, Biden recounted various Nevada-specific coronavirus figures to underscore his criticisms of Trump: 82,000 coronavirus cases and 1,600 deaths with seniors and minorities disproportionately affected, worst-in-the-nation unemployment at 13.2 percent, half of Culinary Union Local 226 members still out of work and tourism down 70 percent.

He also claimed Trump’s plans for Social Security would empty the fund and leave 410,000 Nevadans’ retirement in flux. The administration’s plans to abolish the Affordable Care Act with no clear replacement would kick 282,000 Nevadans off of their insurance and leave 1.2 million Nevadans with pre-existing conditions at risk, Biden added.

The Trump campaign has repeatedly denied Biden’s claim about Social Security, which is based off of an analysis of hypothetical legislation and not any administration plan.

As the parking lot heated in the desert sun, Biden recounted a number of his policy proposes in a sort-of lightning rounds: A $15 minimum wage, free public college tuition for families making less than $125,000, a $15,000 tax credit for first-time home buyers and universal preschool.

Biden said he would pay for these changes and more with a tax plan that would not raise taxes on anyone making less than $400,000, as well as create 7 million more jobs and $1 trillion more economic growth than anything Trump is proposing.

Trump’s campaign has decried Biden’s tax pledges as false, saying they would undo cuts — and thus raise taxes — for most income groups.

Biden criticized Trump for not getting to work on more coronavirus aid, saying the president was instead prioritizing providing more tax cuts for Trump’s fellow billionaires.

He also accused Trump of “destabilizing the government” with reckless behavior before, during and in the recent days following the president’s COVID-19 diagnosis.

“The longer Donald Trump is president, the more reckless he gets,” Biden said. “How can we trust him to protect this country?”

A group of about 30 Trump supporters gathered outside the rally, and chanted “go home Joe” as cars left.

Trump Victory organized the demonstration due to Biden’s “refusal to say where he stands on court packing,” spokesman Keith Schipper said.

Michael Pecjak, 22, said he attended the demonstration so show that people support Trump.

“I think in a way we kind of got our message out that the silent majority — we’re here and we’re going to be ready to vote by Nov. 3,” he said.

The former vice president also attended a meeting with Latino community leaders at the East Las Vegas Community Center, according to reports from his campaign’s press pool. The event was by invitation only.

According to pool reports, Biden said the stake of the election was high because of “the incompetence of this administration” and rattled off community-specific statistics: 40,000 Latinos dead from the pandemic nationwide, 3 million Latinos who have lost their jobs, one in three Latino businesses that have closed.

“We have to end this cycle where in good times, you’re being left behind, in bad times, you’re the first in trouble and as we come out, always the last to come out,” Biden said.

He put an emphasis on early voting, and said a sweeping victory would stop Trump’s efforts to undermine the election.

“He’s trying to scare us,” Biden said of Trump. “He tried to continue to convince everybody there’s ways they can play with the vote and undermine the vote. They can’t. If we show up, we win.”

Biden continued: “And look what’s happening in early voting all across America — long lines, long lines. We can’t just win, we have to win overwhelmingly, so he can’t be in a position where he can put the phony challenges that he’s talking about.”