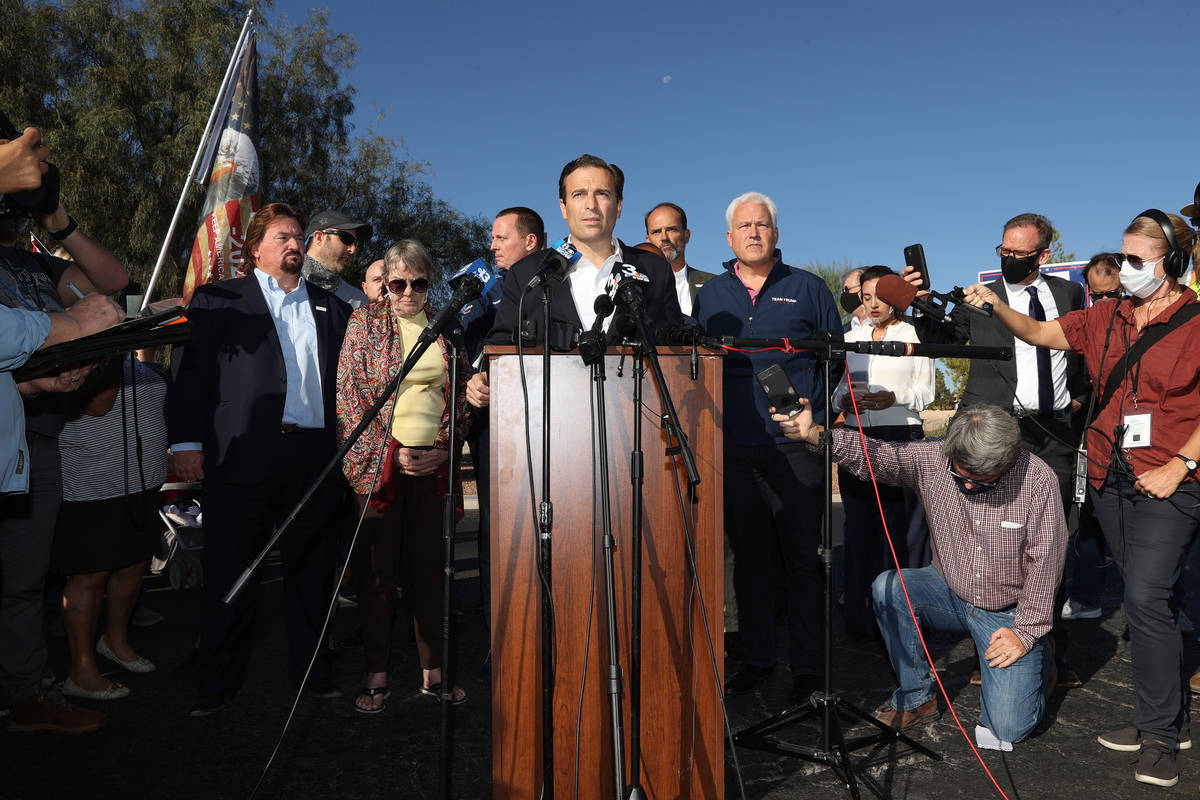 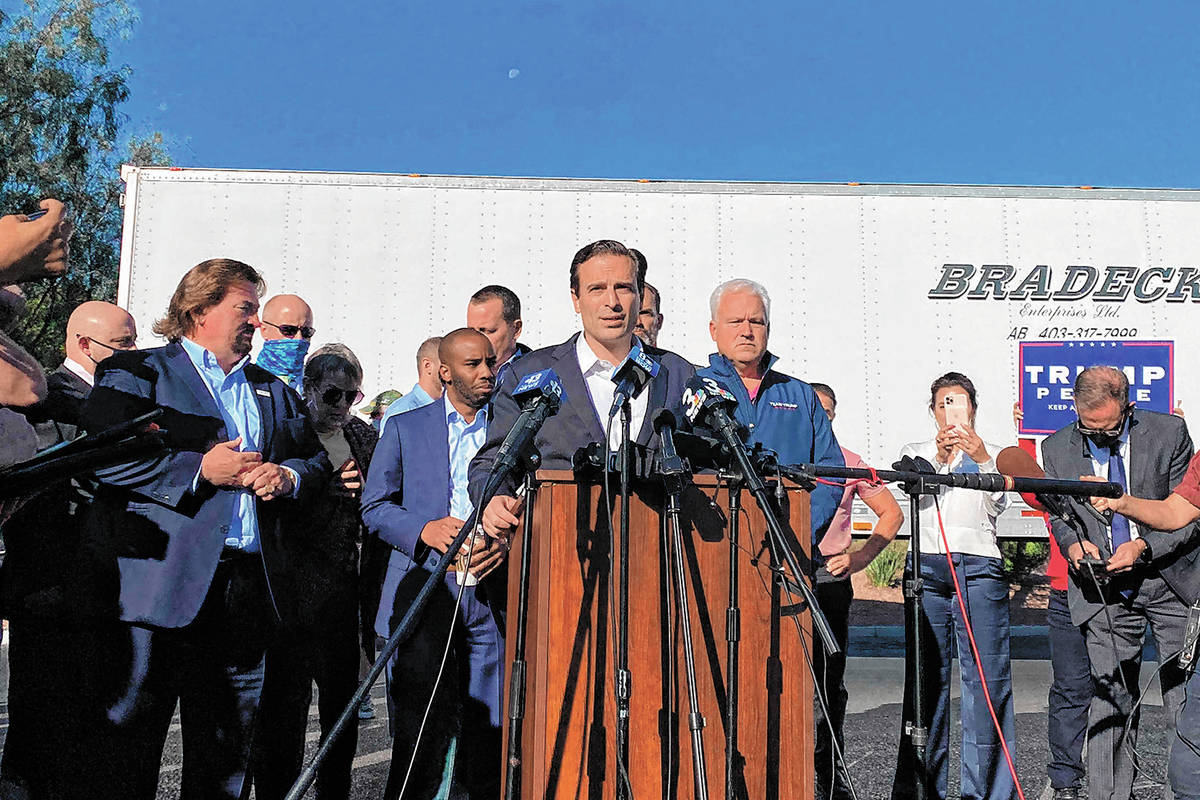 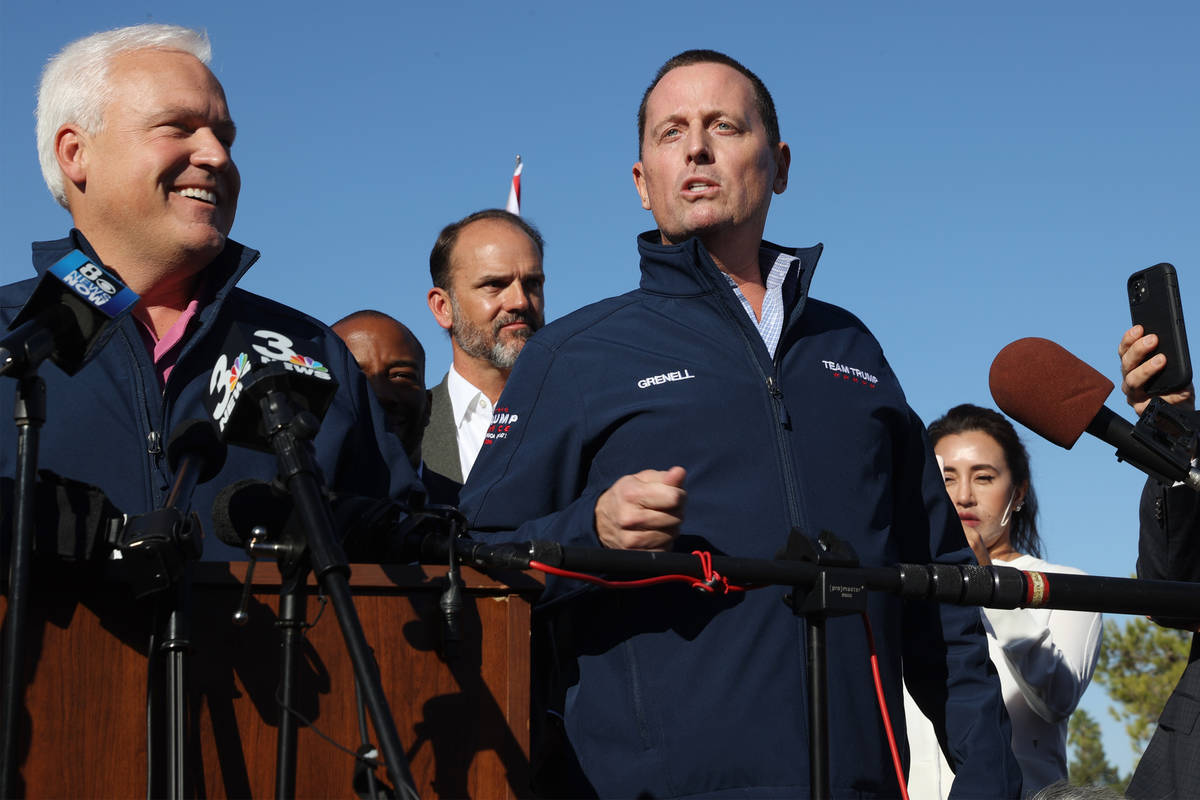 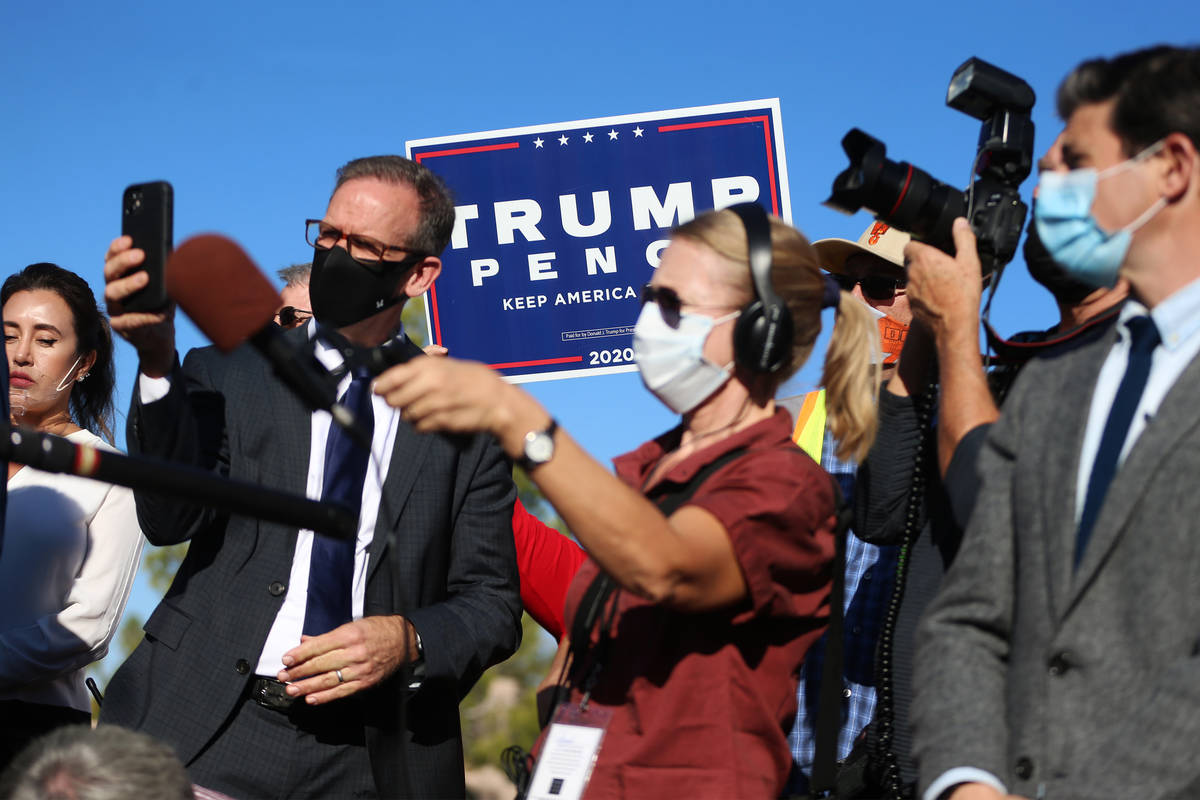 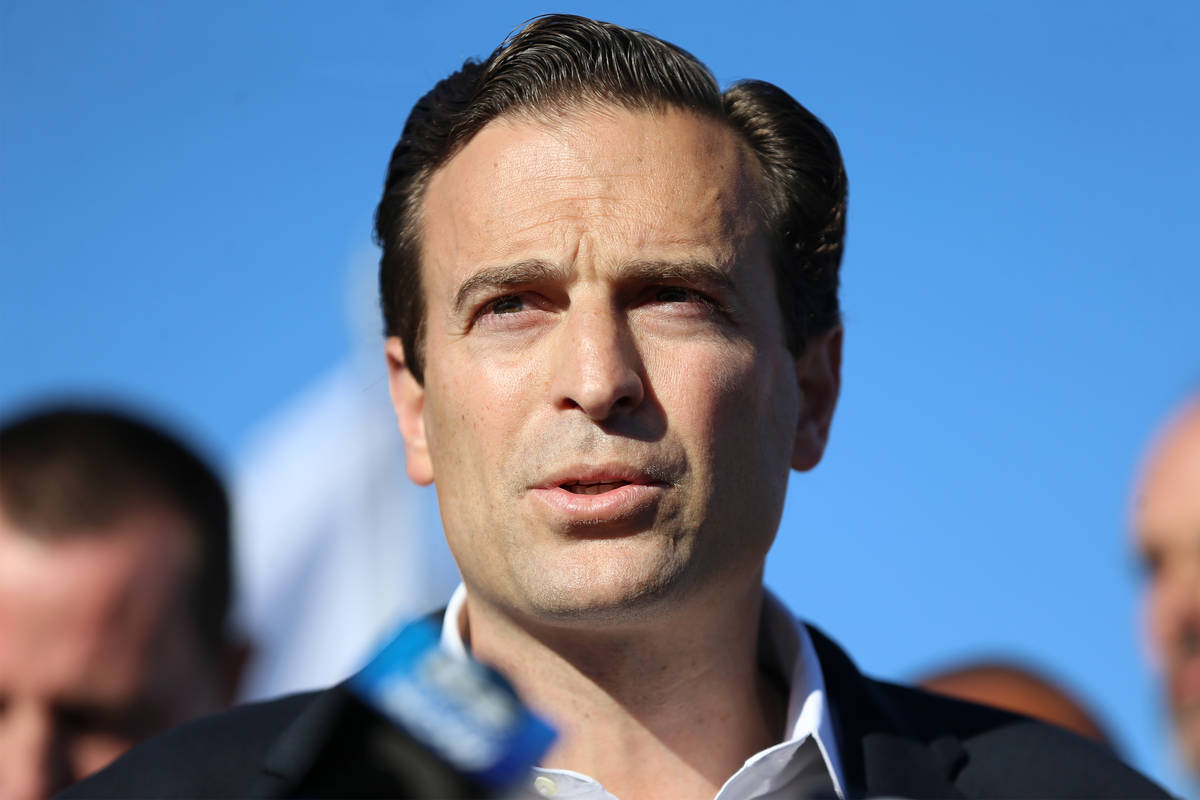 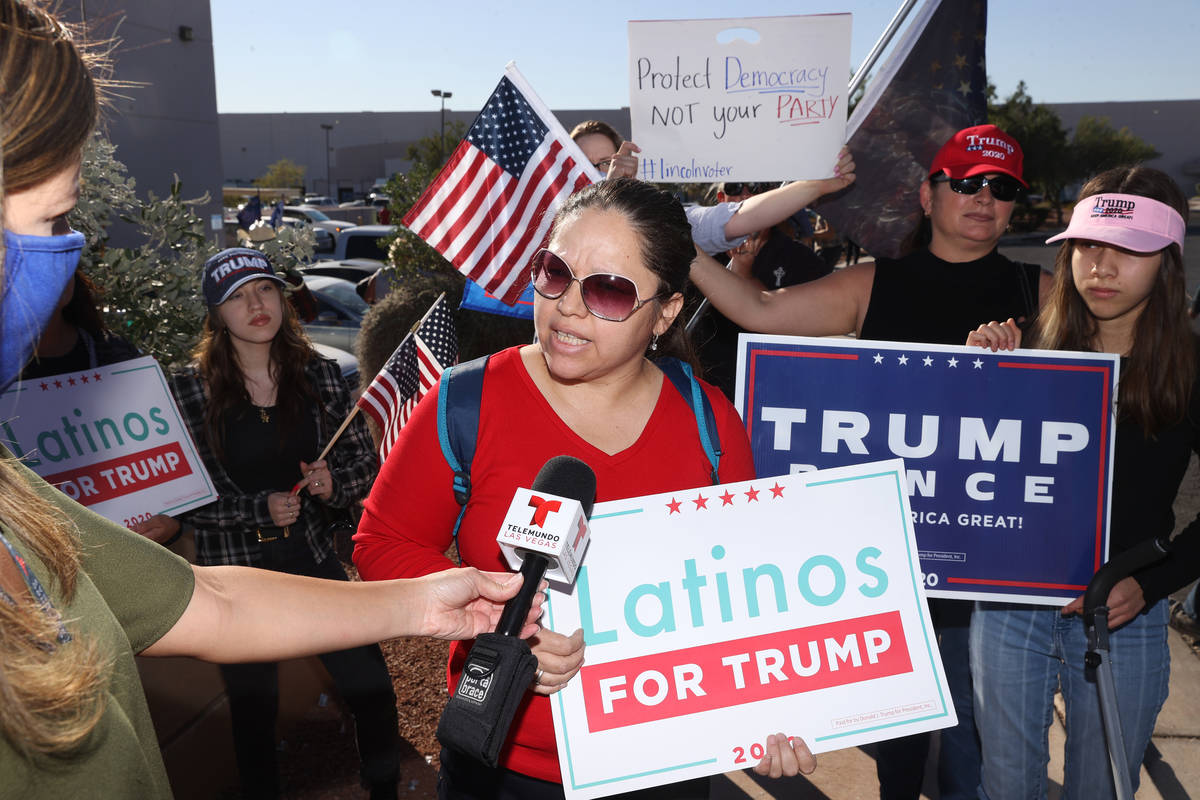 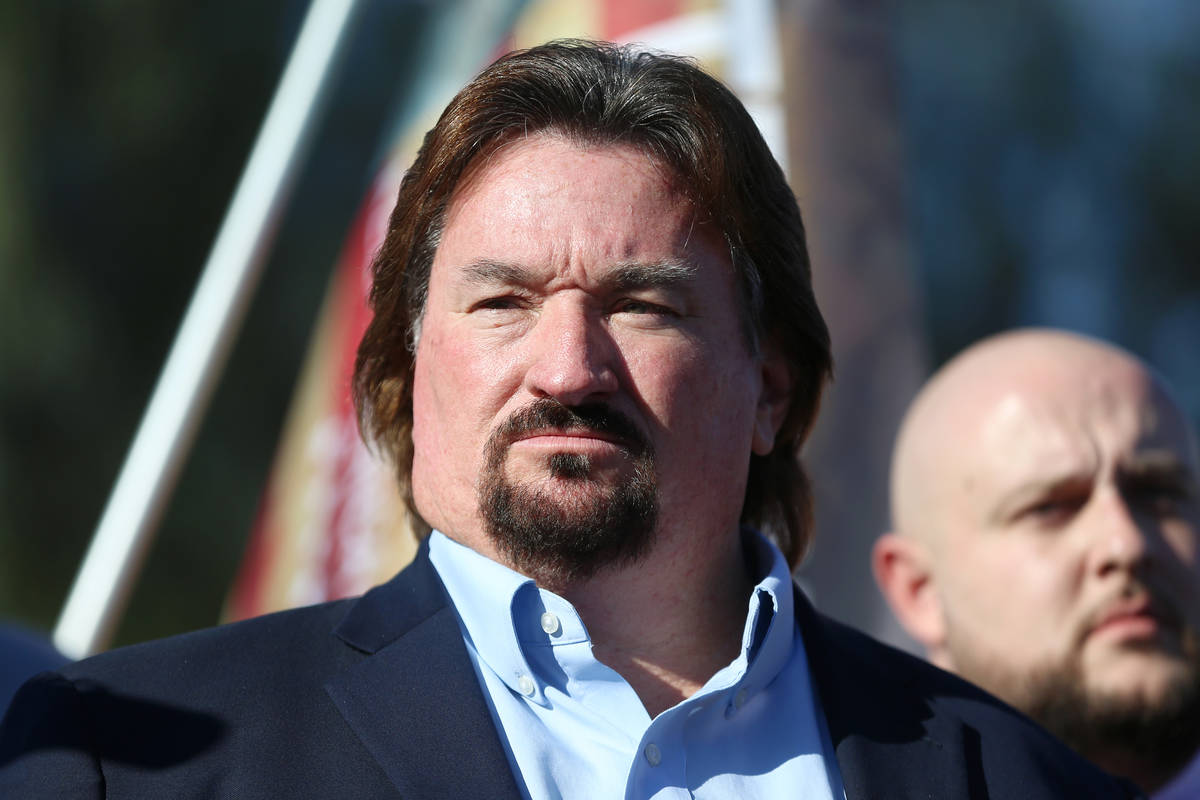 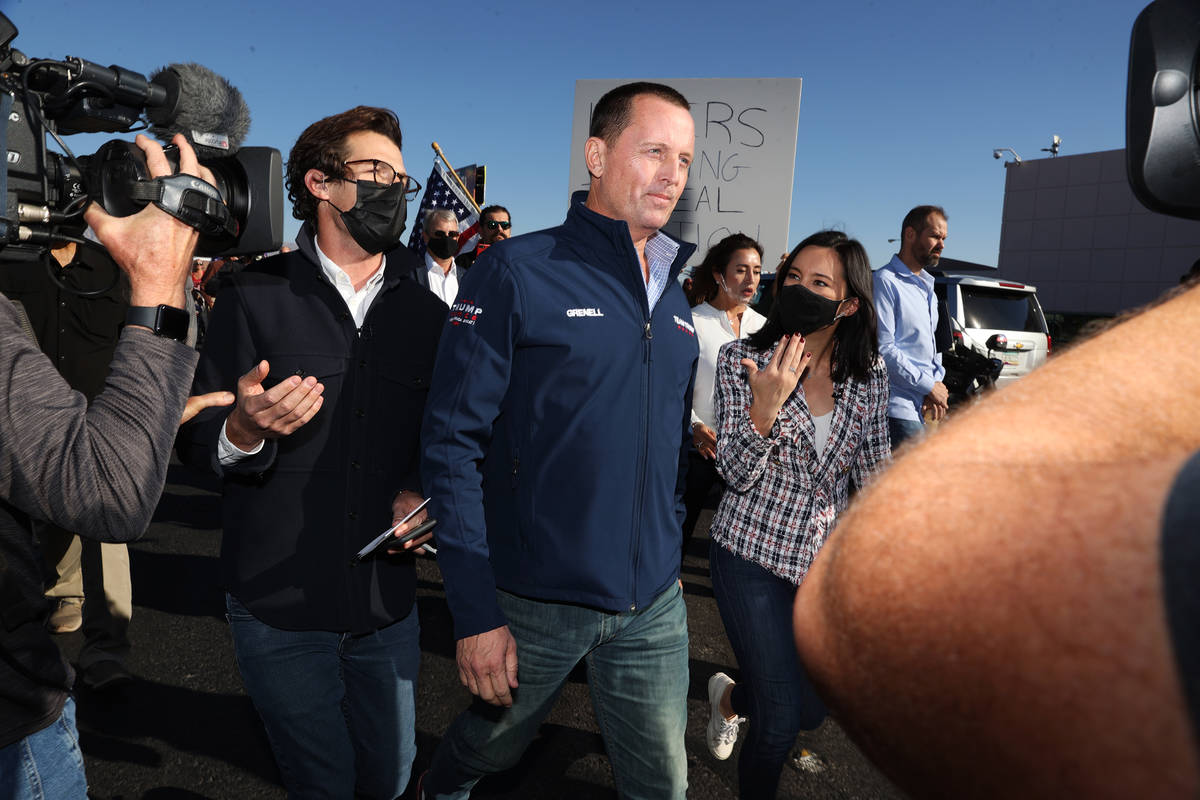 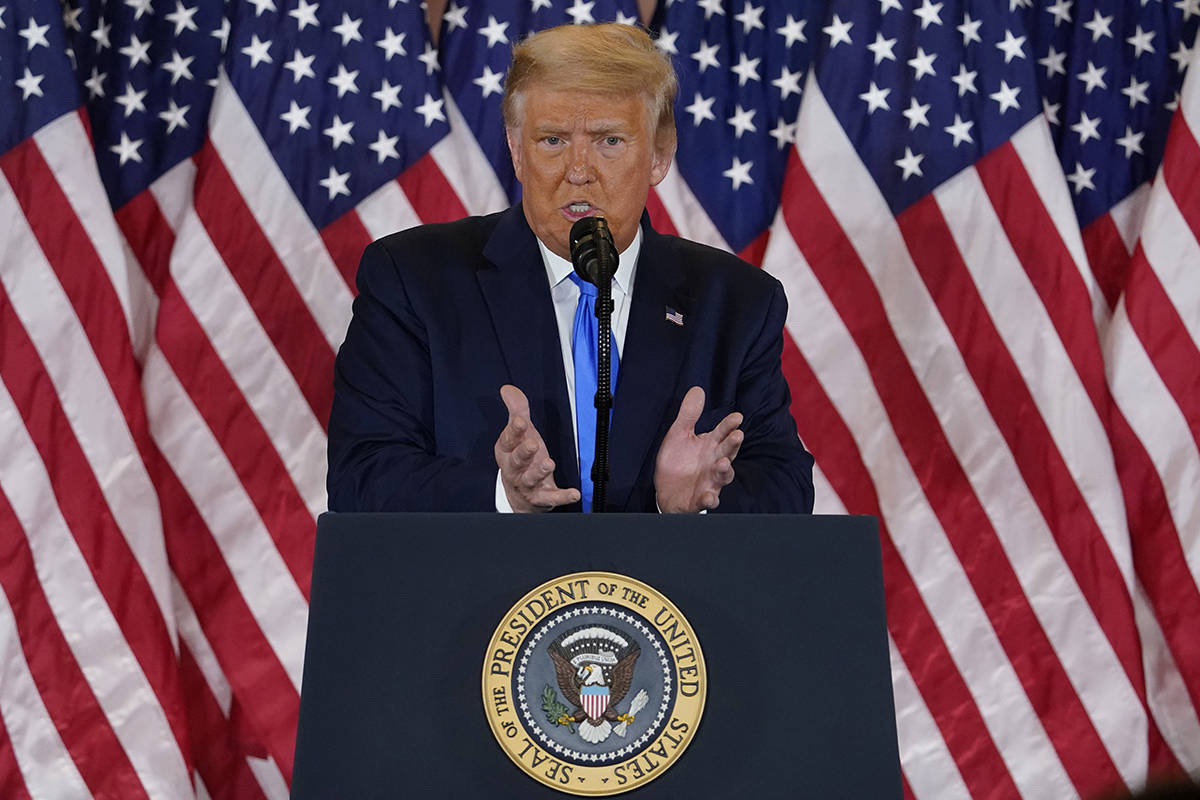 Although President Donald Trump’s campaign and the Nevada Republican Party are not listed as plaintiffs, they held a news conference Thursday morning promising the lawsuit, an event that featured the named plaintiff, Las Vegas resident Jill Stokke.

The campaigns of Dan Rodimer and Jim Marchant, who are challenging Reps. Susie Lee and Steven Horsford, respectively, are two of the other listed plaintiffs.

Their lawsuit alleged “3,000 instances of ineligible individuals casting ballots” in Clark County, including ballots from deceased voters. It offered no evidence of that or any other allegations, and there are no attached exhibits to the filing.

It also does not note whether the cast ballots have, in fact, made it through the county’s ongoing verification process.

A separate letter sent to the Department of Justice on Wednesday by the Nevada Republican Party alleged to have identified 3,062 individuals who cast a ballot in Nevada while living in another state. It includes an attachment that lists only addresses of the allegedly ineligible voters but not names or any other identifying information. The Review-Journal has requested the names but has not yet received them.

There are a variety of reasons why a person residing out of the state may be allowed to cast a ballot in Nevada, including part-time residents of the state with homes elsewhere, attending college in another state, or people who have recently moved.

The lawsuit alleged the Agilis software used by Clark County as the initial step in signature verification of mail ballots violates state election law because other counties do not use the same method, which means Clark residents are “at an unequal risk of having their legal votes diluted by votes with mismatched signatures.”

Stokke, the lawsuit said, was stopped from voting in person after an elections official told her a mail ballot had been submitted in her name. The filing alleged the Agilis machine verified this signature and allowed it to be counted.

In a news conference after the Trump campaign’s event, Gloria said he handled Stokke’s case personally.

“I personally dealt with Ms. Stokke,” Gloria said. “She brought her claim to me, we reviewed the ballot, and, in our opinion, it’s her signature. We also gave her an opportunity to provide a statement, if she wanted to object to that, if she wanted to challenge that. She refused to do so.”

Gloria said an investigator with the Nevada secretary of state’s office also reviewed the matter.

“They had no issue with the assistance we tried to give her,” Gloria said.

Gloria said he was not aware of any illegal votes being counted.

The machine in question, county officials have said repeatedly, is only the first step in the signature verification process. If it rejects a signature, as it does 70 percent of the time, that ballot goes to county staff for verification, with Gloria having final say.

The lawsuit also falsely asserts that the county is the only one in Nevada that does not verify signatures on absentee and mail ballots in person.

It also alleged that another plaintiff, Chris Prudhome, listed on the lawsuit as a “credentialed member of the media” but on his Twitter account as a Republican strategist and Fox News guest commentator, was denied his right to observe the counting of ballots.

The lawsuit said that Prudhome attempted to watch the count at 12:45 a.m. on Wednesday, and he was told by Gloria the counting had already completed for that day.

This lawsuit is the fourth filed against either Clark County or both Clark and the state by Republican campaigns and the second seeking some sort of change to the counting or verification of mail ballots, which have trended heavily for Democrats.

As of Thursday morning, Trump trails Biden by about 11,400 votes in Nevada. Another round of vote tabulations is expected to be released Friday morning.

Trump’s campaign repeated many of the allegations made in the lawsuit at its news conference Thursday morning.

“We firmly believe that there are many voters in this group of mail-in voters that are not proper voters,” Adam Laxalt, former Nevada attorney general and co-chair of President Donald Trump’s re-election campaign in Nevada, said at the Trump news conference outside the Clark County Election Department vote center in North Las Vegas. “We have received reports of many irregularities across the valley.”

Two Trump representatives spoke but refused to give their names as they alleged that illegal voting had unfolded.

One was former acting Director of National Intelligence Richard Grenell, who declined to offer specifics when asked for evidence of the campaign’s allegations.

The other was Matt Schlapp, chairman of the American Conservative Union.

“Republicans want to circumvent democracy because things aren’t going in their favor,” McCurdy said. “But the will of the people will not be ignored.”

Settlement in prior lawsuit

The Trump campaign and Nevada Republican Party agreed to a settlement with the state and Clark County on a previous lawsuit that similarly tried to stop vote counting in the county.

That attempt was shut down in court, but the lawsuit was still technically active.

The campaign filed a motion with the State Supreme Court on Thursday that said Gloria had agreed to allow more observation of the county’s ballot duplication area in exchange for dismissal of the case. Ballot duplication occurs when a staff member finds something wrong with a voter’s physical ballot, which is then duplicated onto a blank ballot and counted.