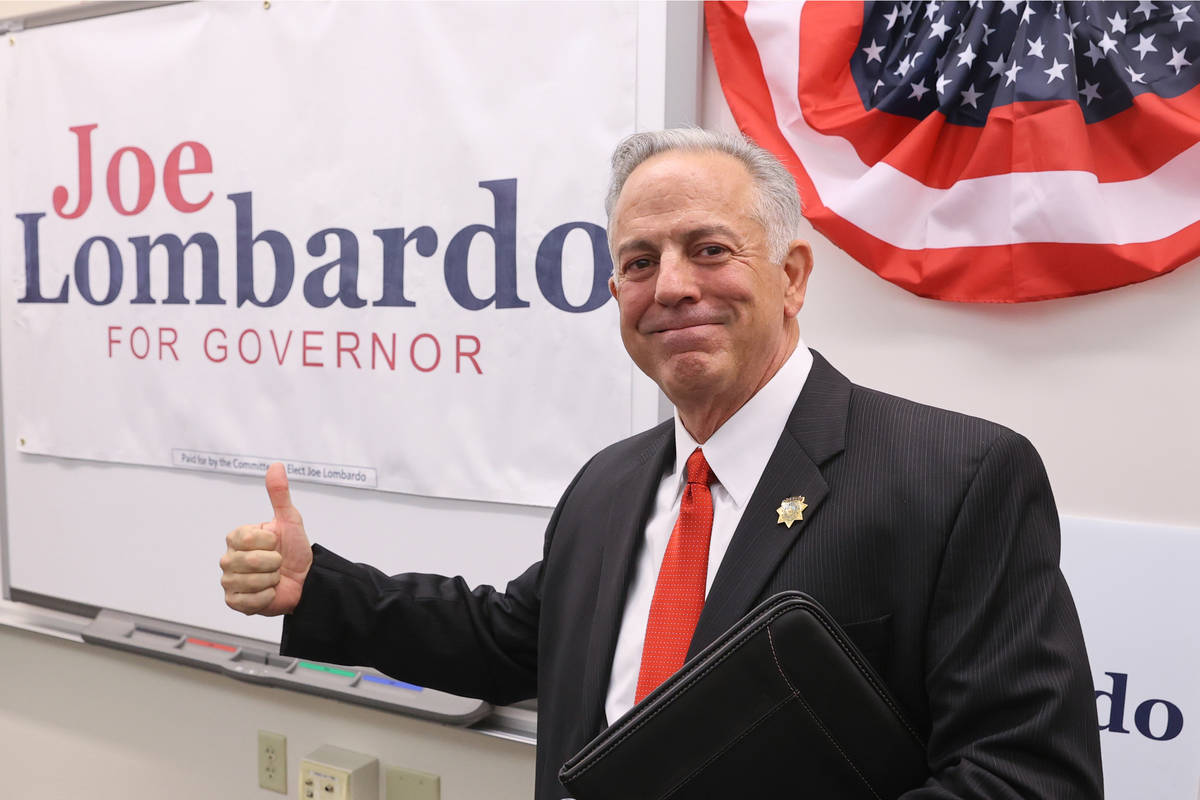 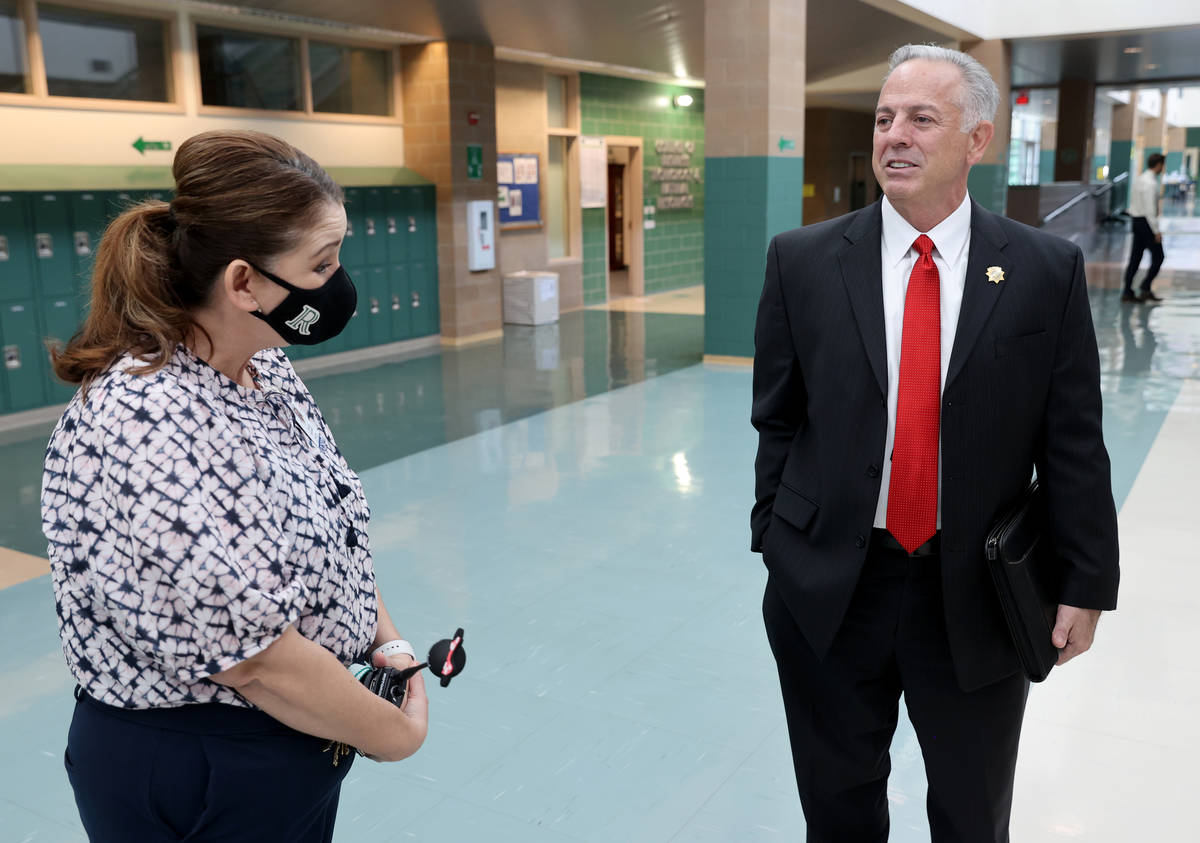 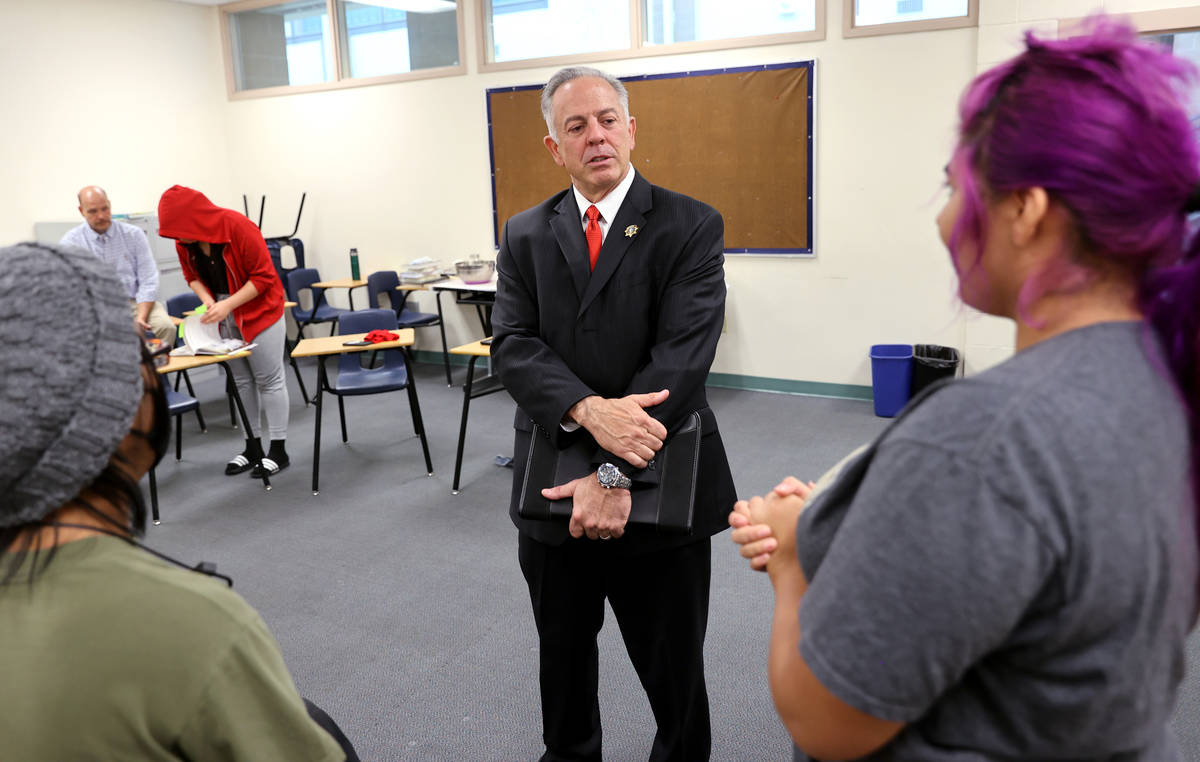 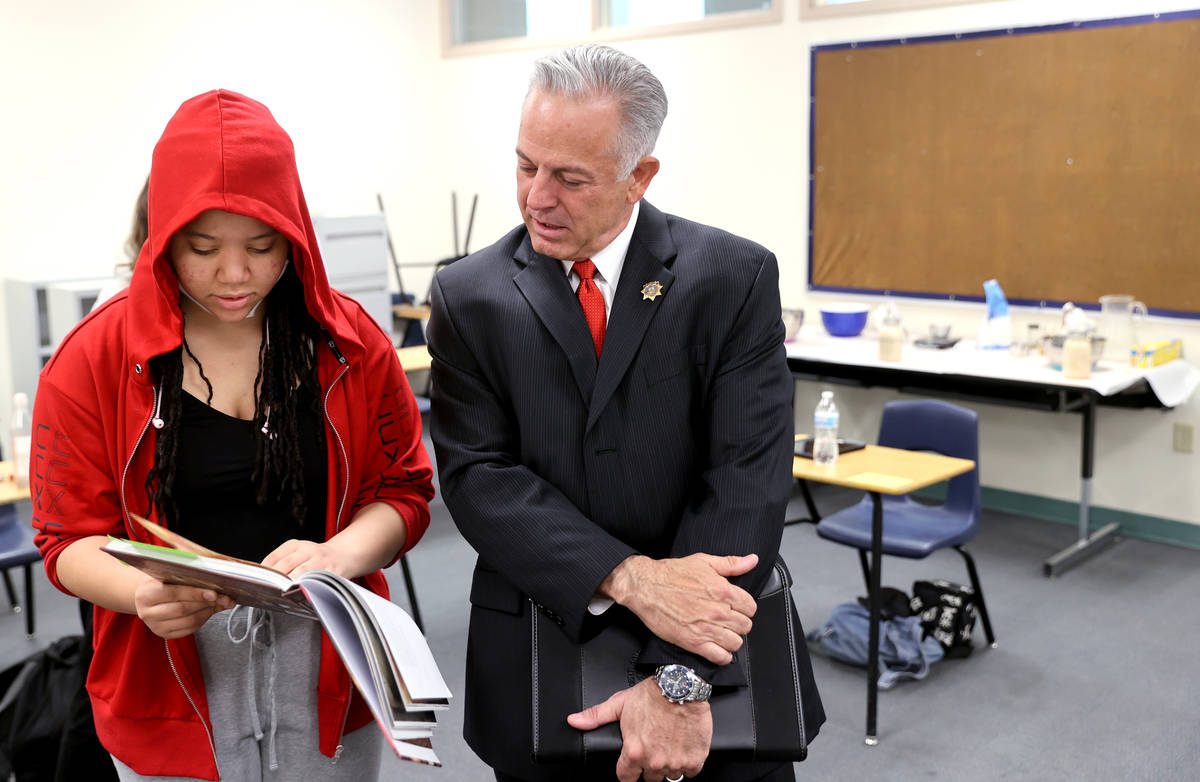 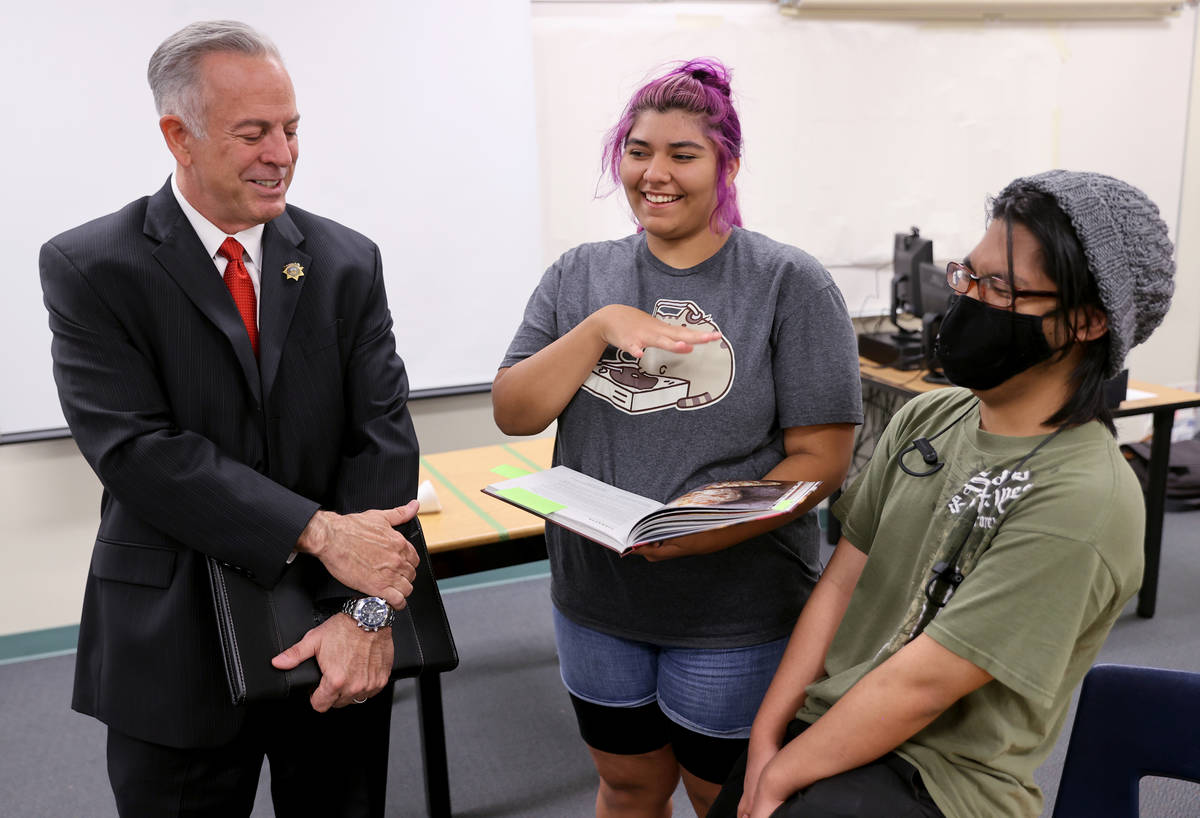 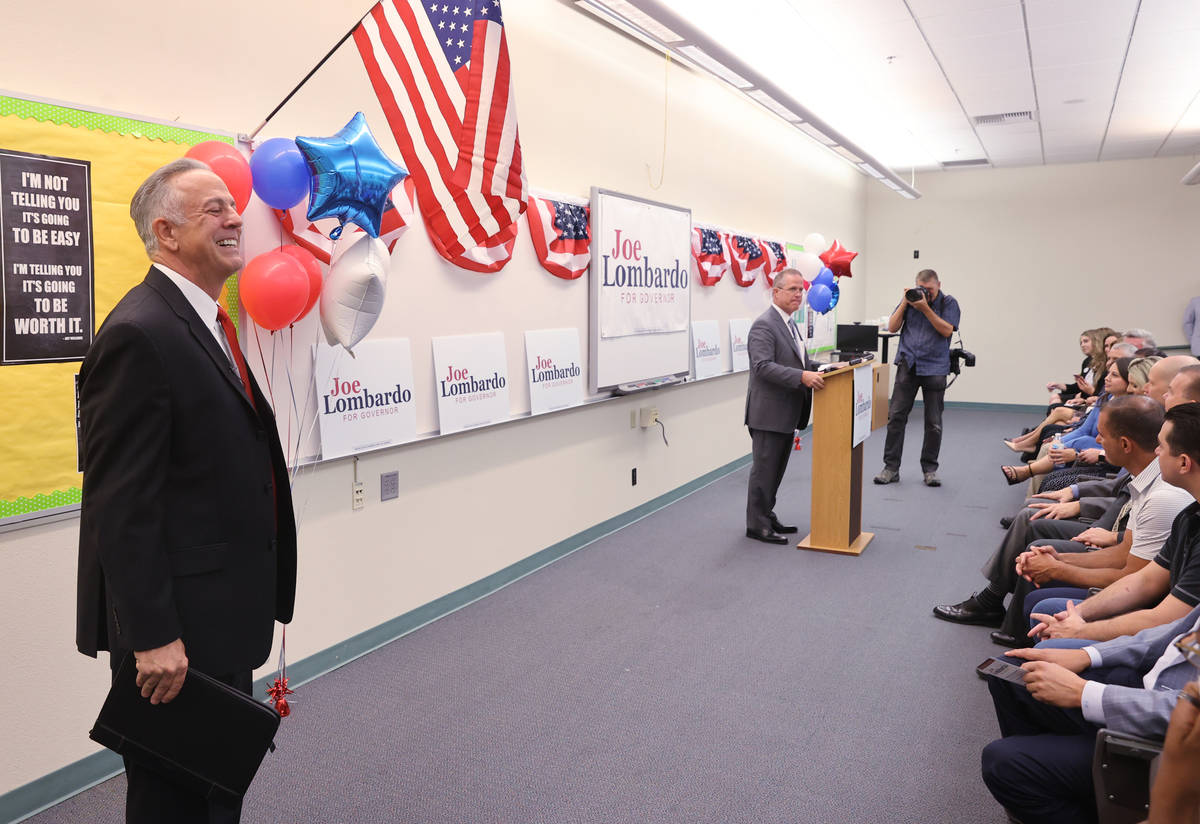 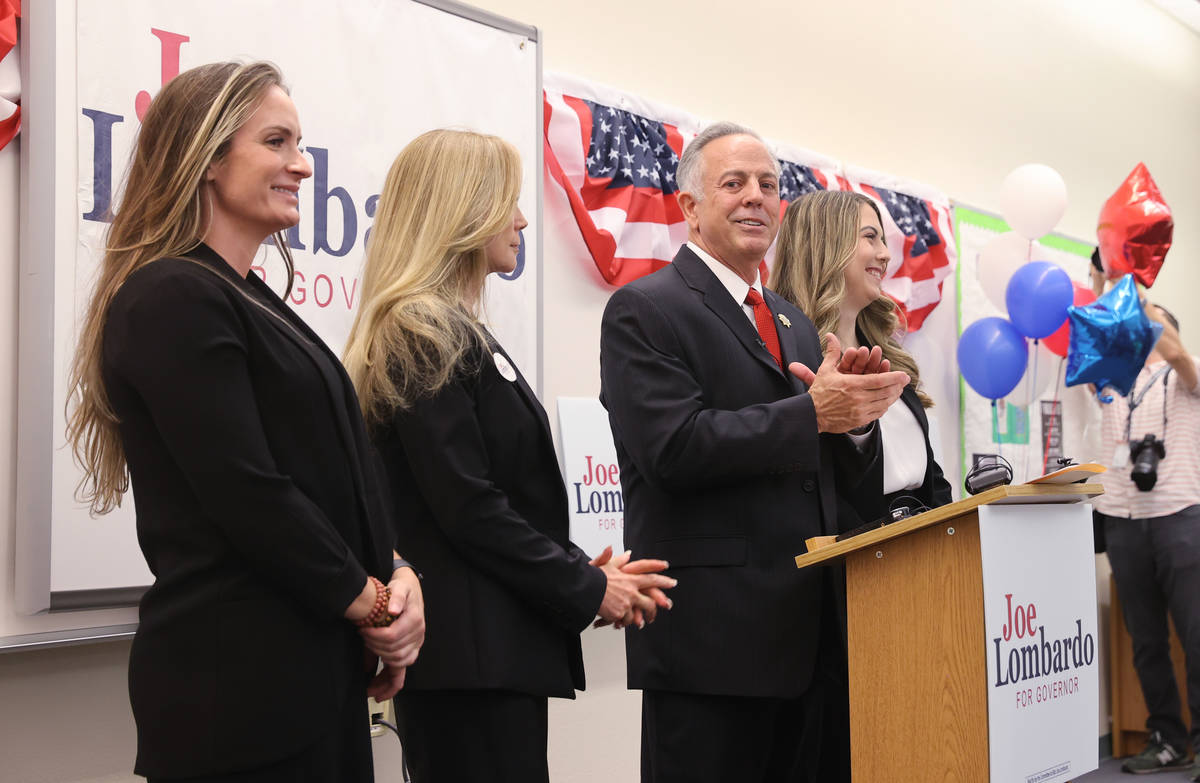 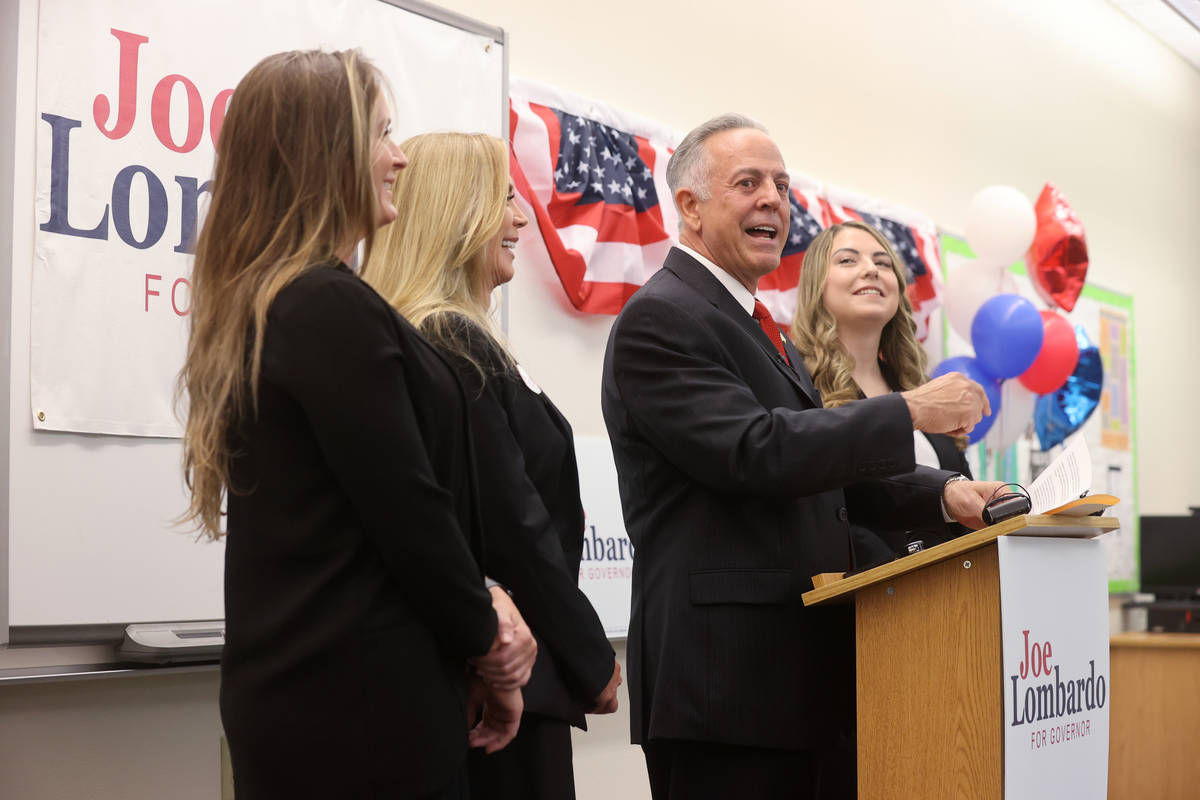 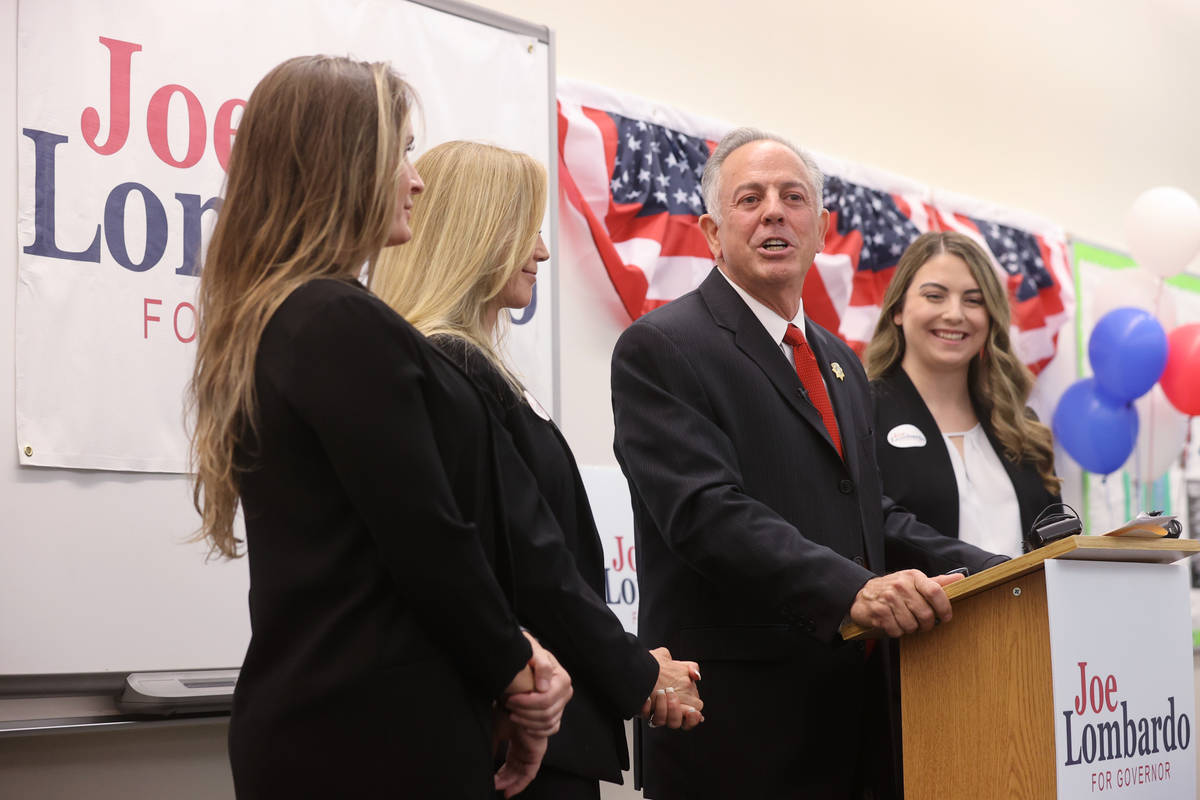 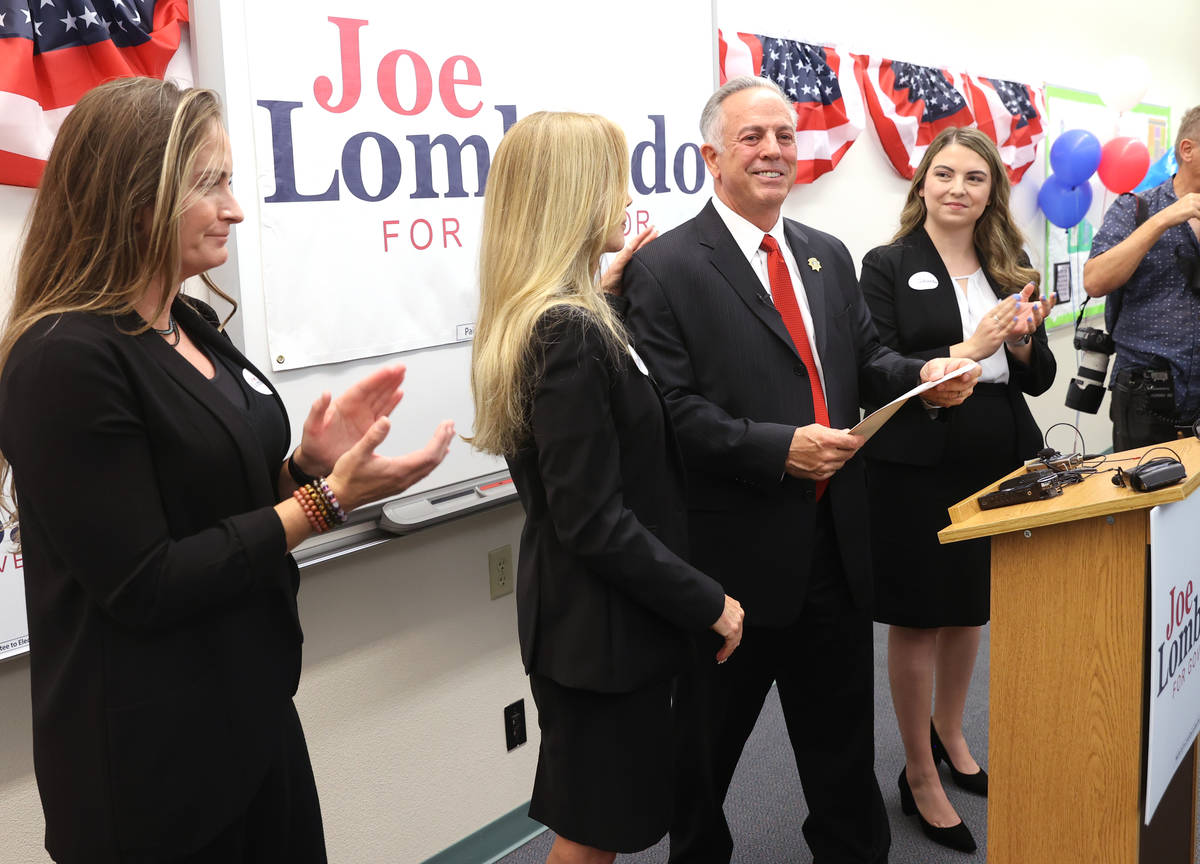 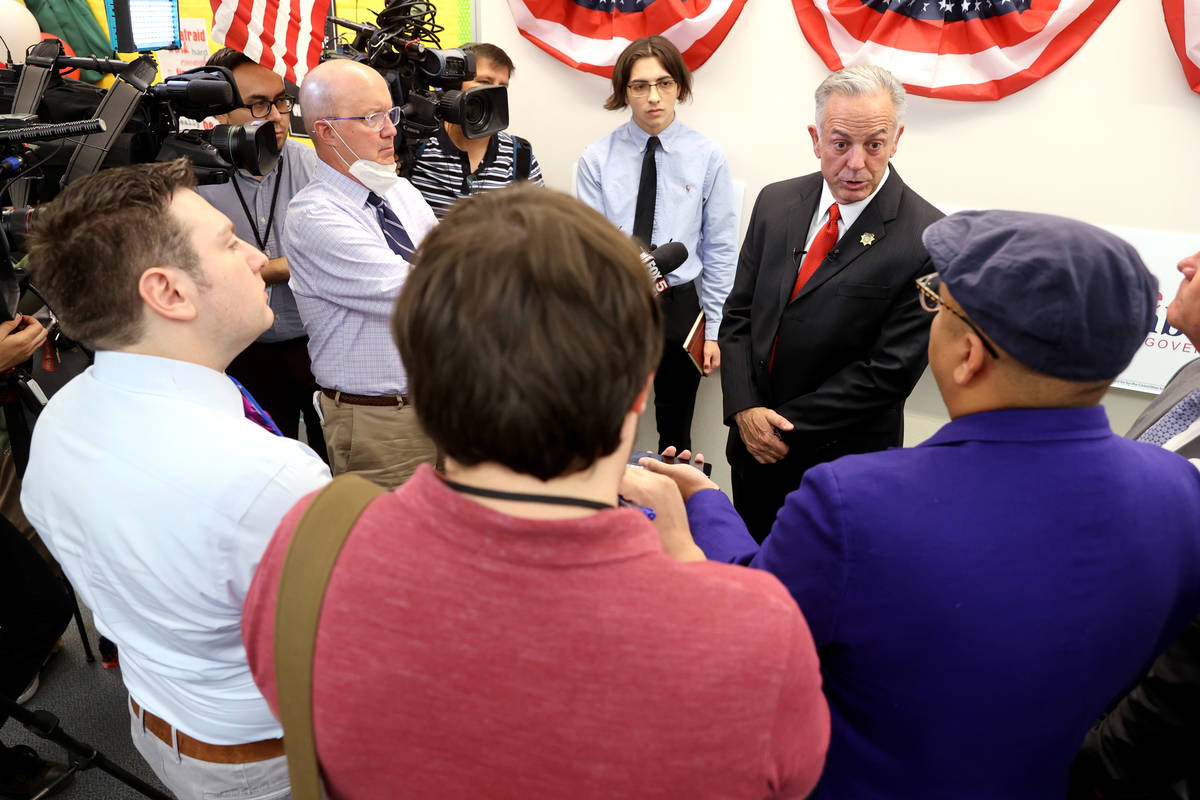 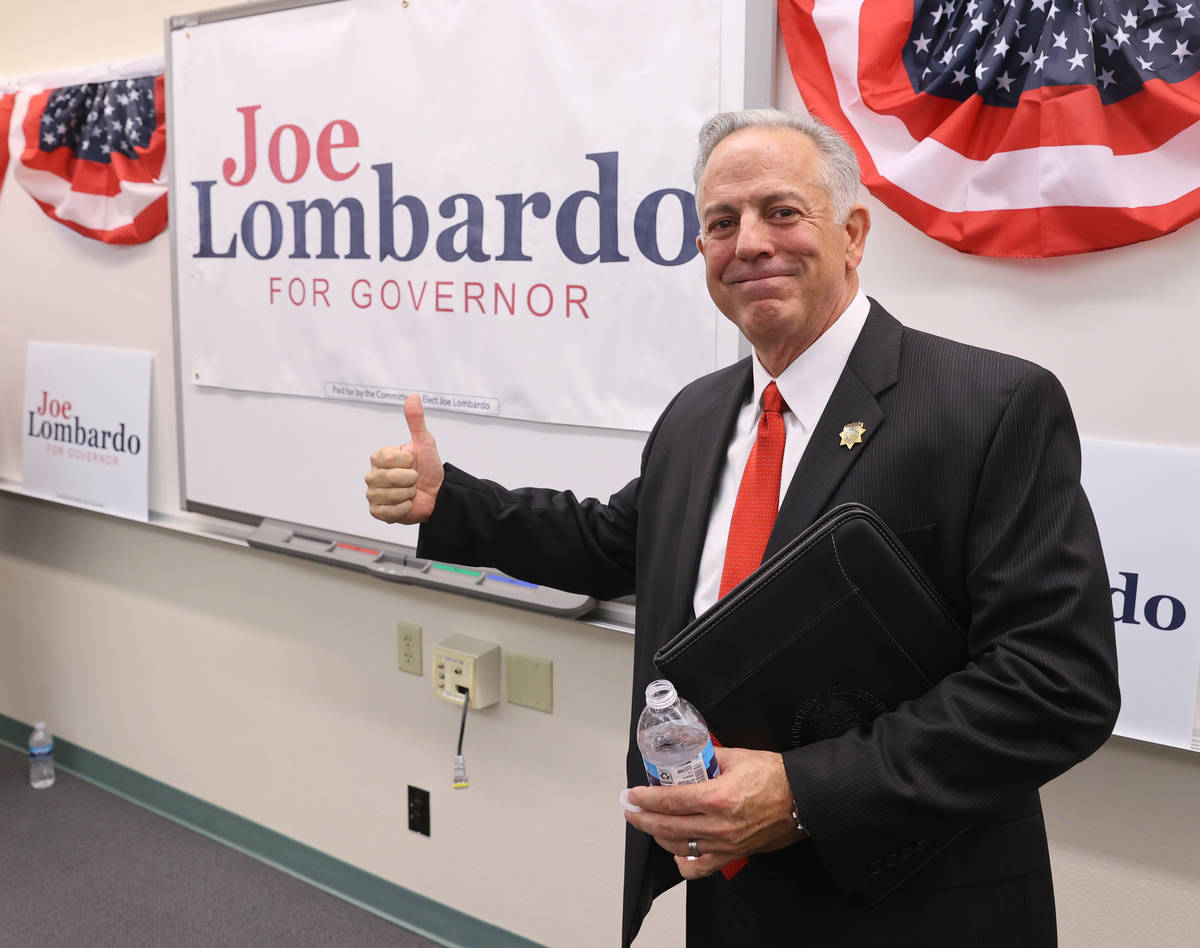 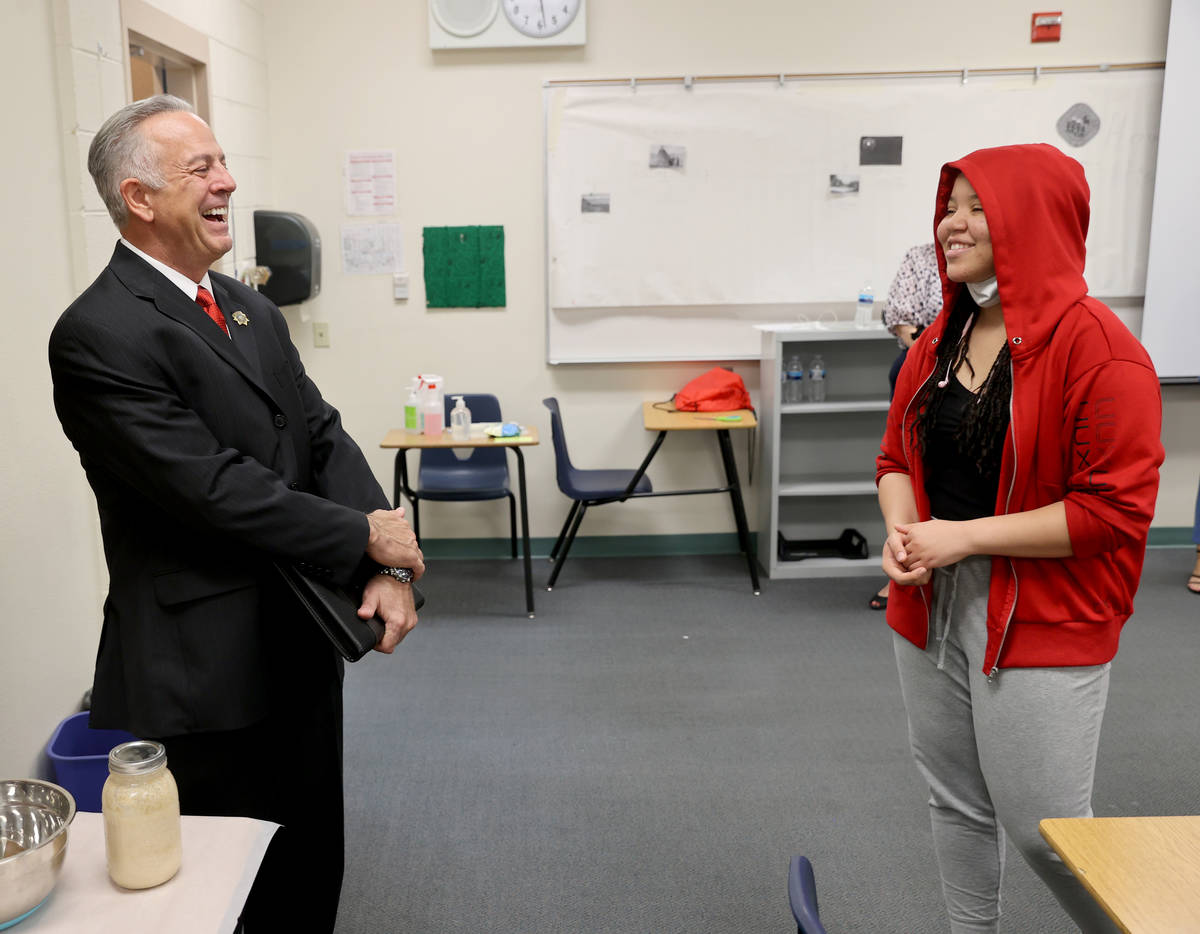 Clark County Sheriff Joe Lombardo officially announced his candidacy for governor during a Monday morning speech at Rancho High School in North Las Vegas, where he pledged to run as a “law and order candidate” who will veto any tax increases passed by the Legislature.

“I grew up here. I went to school here,” Lombardo said, having graduated from Rancho in 1980. “And after serving in the Army, I came back here to serve and protect Nevadans. I’ve been proud to stand up for the victims of crime and stand up (to) those who wish to do us harm.”

Lombardo told a group of invited supporters that police reform was important but had moved too rapidly, leaving officers without sufficient protection. He said his officers stood against violence as Seattle, Portland and Baltimore saw rioting last summer, referencing several months of sustained protest over the May 2020 murder of George Floyd by a Minnesota police officer. Lombardo pledged to stand by his six-year record as sheriff and his 26 years at Metro that preceded his election.

The sheriff also criticized Gov. Steve Sisolak at length over his handling of the coronavirus pandemic, specifically the shutdown of schools and businesses.

“We have a governor and Legislature focused on protecting their own party, guaranteeing single-party rule so they can introduce state income tax, raise your property tax and advance public policy that would make Bernie Sanders blush,” Lombardo said.

In his speech, Lombardo criticized recent changes to state voting laws, saying he opposed the expansion of vote-by-mail and allowing others to collect and turn in a voter’s ballot (commonly referred to by Republicans as “ballot harvesting”), while also supporting a voter identification requirement.

However, in a news conference after the announcement, Lombardo juggled the question of whether Nevada’s 2020 election results were accurate — something former President Donald Trump and the Nevada Republican Party continue to dispute — before ultimately deciding not to answer it.

“I have a good thought on that,” Lombardo said. “I don’t know the process of the investigation… I’m not privy to the data, but all I know is I’m moving forward. I’m not moving backward. And what I see is a system that makes it easy for people to commit fraud. Your question was do I think there was fraud and everything like that — I’m not even going to give you an answer to that.”

Asked if he would seek Trump’s endorsement, Lombardo seemed to say he would not.

“Seek it? That’s an arbitrary word,” Lombardo said. “If I receive it, I’ll embrace it. It’s — sure. Anybody that’s willing to endorse me, what I believe in, the direction I want to go — I’m not going to turn them away.”

During his speech, Lombardo said he was a strong supporter of the Second Amendment and eliminated Clark County’s gun registry. North Las Vegas Mayor John Lee, the first candidate to enter the Republican primary, has already started criticizing Lombardo’s record on guns.

He pushed back against what will also likely be a key attack point in the Republican primary: That he softened the department’s approach toward undocumented immigrants by no longer honoring federal immigration holds after a California court decision.

“There’s been a lot of rhetoric out there that I have created a sanctuary jurisdiction, and that is absolutely not true,” Lombardo said. “What we did was adjust, move resources and address the problem to move forward versus backing up and saying we raise our hands and gave up.”

Prior to joining the police department, Lombardo served in the U.S. Army, Army National Guard and Army Reserve. He also holds bachelor’s and master’s degrees in crisis management from UNLV.

Monday’s event was ceremonial, as Lombardo previously confirmed his 2020 gubernatorial candidacy as a Republican during a charity event in Reno last month and has since been attending various candidate forums across the state. His name was frequently mentioned in rumors leading up to his confirmation.

Former Lt. Gov. Mark Hutchison, who was also rumored to be looking at his own gubernatorial bid earlier this year, introduced Lombardo and noted the sheriff has twice won election, though in a nonpartisan race, as a Republican in deeply Democratic Clark County. Hutchison, now chairing Lombardo’s campaign, called the sheriff “a pro-life, pro-Second Amendment Republican.”

He joins Lee and Reno attorney and far-right activist Joey Gilbert as announced Republican candidates hoping to challenge Sisolak’s re-election bid, though no one will be an official candidate until the March filing period for statewide office.

An attempt to reach Sisolak’s campaign for a response to Lombardo’s accusations on Monday was not successful. But state Democrats’ newly formed coordinated campaign, Nevada Democratic Victory, mocked Lombardo for holding a launch event after his candidacy was widely reported and criticized the sheriff for rising homicide rates in 2021.

“Joe Lombardo started off his campaign with a whimper, and his weaknesses have already been noticed by several fellow Republicans looking to challenge him for the nomination,” spokeswoman Molly Forgey said.

Lombardo will soon embark on a statewide tour, with stops planned in Reno, Carson City, Winnemucca, Elko and Ely.