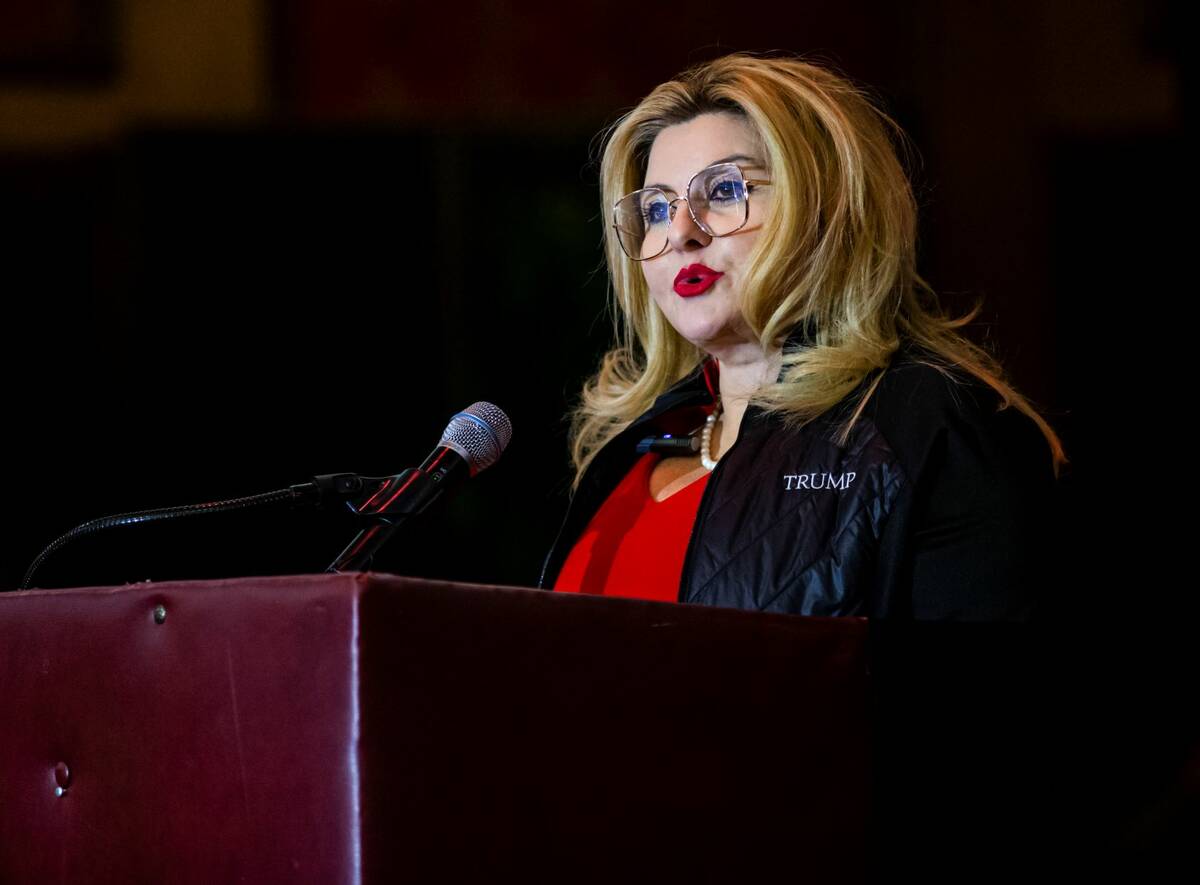 CARSON CITY — In a campaign ad, Nevada gubernatorial candidate Michele Fiore steps out of a Ford F-150 with a handgun holstered on her hip and tells viewers she was one of the first elected officials to endorse Donald Trump in the lead-up to the 2016 election.

“You better believe I was attacked for it,” Fiore says, affirming her commitment to the former president as a country rock-style guitar riff plays in the background.

She hopes Trump is watching.

Her campaign spent $6,270 to broadcast 62 television spots on Fox News in the West Palm Beach-Fort Pierce media market during in the final week of November, Federal Communications Commission filings show. Trump has been splitting his time since leaving office between Florida, his official residence, and his golf club in Bedminster, New Jersey, where he spent most of last summer.

When Fiore’s ads aired over the Thanksgiving holiday, he and his family were at Mar-a-Lago.

Candidates and interest groups have long used targeted cable ads as a way to reach the television-obsessed Trump, often lining up spots in Washington and Florida to catch his attention when he was in the White House or vacationing. Fiore’s move reflects Trump’s enduring post-presidential influence in the Republican Party and underscores how his endorsement is seen as a potential game-changer by Republicans embroiled in primary battles throughout the country.

Since Trump left the White House, much of the competition for his attention has played out in Florida. In one particularly vivid example, a multifaced billboard on the boulevard connecting Palm Beach International Airport to Mar-a-Lago is often emblazoned with messages from supporters and detractors.

At the club, Trump has held dozens of fundraisers and other events for Republicans running for U.S. Senate, governor and other offices, including for Florida Gov. Ron DeSantis, South Dakota Gov. Kristi Noem and Sarah Sanders, his former press secretary now running for governor of Arkansas. The venue typically guarantees a strong showing, thanks to its loyal, paid membership and Trump often appearing, even at events he doesn’t host.

He’s also welcomed a succession of candidates seeking his support, including Idaho Lt. Gov. Janice McGeachin who is running against incumbent Republican Gov. Brad Little. Trump endorsed McGeachin a week after she visited Mar-a-Lago in November.

Fiore, a Las Vegas city councilwoman, is one of at least 10 candidates running for governor in Nevada, a swing state Trump lost narrowly in 2020.

She was elected in 2012 to the Nevada statehouse, where she championed gun rights and introduced a controversial proposal that would have dramatically curbed federal power to manage public lands and waters in Nevada. Her ties to and support of rancher Cliven Bundy and his family during armed standoffs between self-described citizen militia members and federal law enforcement thrust her into a national spotlight in 2014 and 2016.

This year, Fiore is running on a platform that includes opposition to coronavirus mandates, support for law enforcement against protesters she calls “domestic terrorists” and reversing Nevada’s decision to send all active voters mail-in ballots.

Other candidates running in the June 2022 Republican primary include former U.S. Sen. Dean Heller, Clark County Sheriff Joe Lombardo and Joey Gilbert, a Reno attorney who was outside the U.S. Capitol during last year’s insurrection. The winner will take on Democratic Gov. Steve Sisolak, who won by 5.1 percentage points in 2018.

Representatives for Trump did not respond to questions about whether he had seen Fiore’s ad or planned to endorsed in the Nevada governor’s race.

The Fiore campaign also spent more than $100,000 to air ads in Reno, Las Vegas and Salt Lake City, where the media market extends to rural northeastern Nevada. Targeting the Florida airwaves in addition to Nevada is simply about reminding the former president of her long-time support, her campaign consultant Rory McShane said.

“Many candidates are seeking Trump endorsements but if you look back at four and five years, a lot of those same candidates were disavowing Trump and even holding anti-Trump rallies,” McShane said.

“It’s important to remind the President’s team that Michele Fiore is the only true America First candidate running for Governor,” he added.

Heller, who told The Associated Press last week he would also welcome Trump’s endorsement, clashed with Trump over efforts to repeal the Affordable Care Act in 2017 but the two reconciled and campaigned together in 2018, when then-U.S. Rep. Jacky Rosen defeated Heller in Nevada’s Senate race.

Since 2020, Fiore is the only candidate running for statewide office outside of Florida to purchase ads from Comcast, a cable provider in the region, according to a review of FCC filings.

“What it tells me is that — assuming that the goal here is to get noticed by former President Trump — the ads are targeted at an audience of one, as opposed to an audience of thousands or millions of voters,” said Vanderbilt University professor John Sides, a political scientist who has written on the effects of television advertising on political campaigns.

“The calculation is that if you can get on the president’s radar screen or earn his support,” Sides said, “then that endorsement will be worth the investment of buying ads in a media market thousands of miles away.”