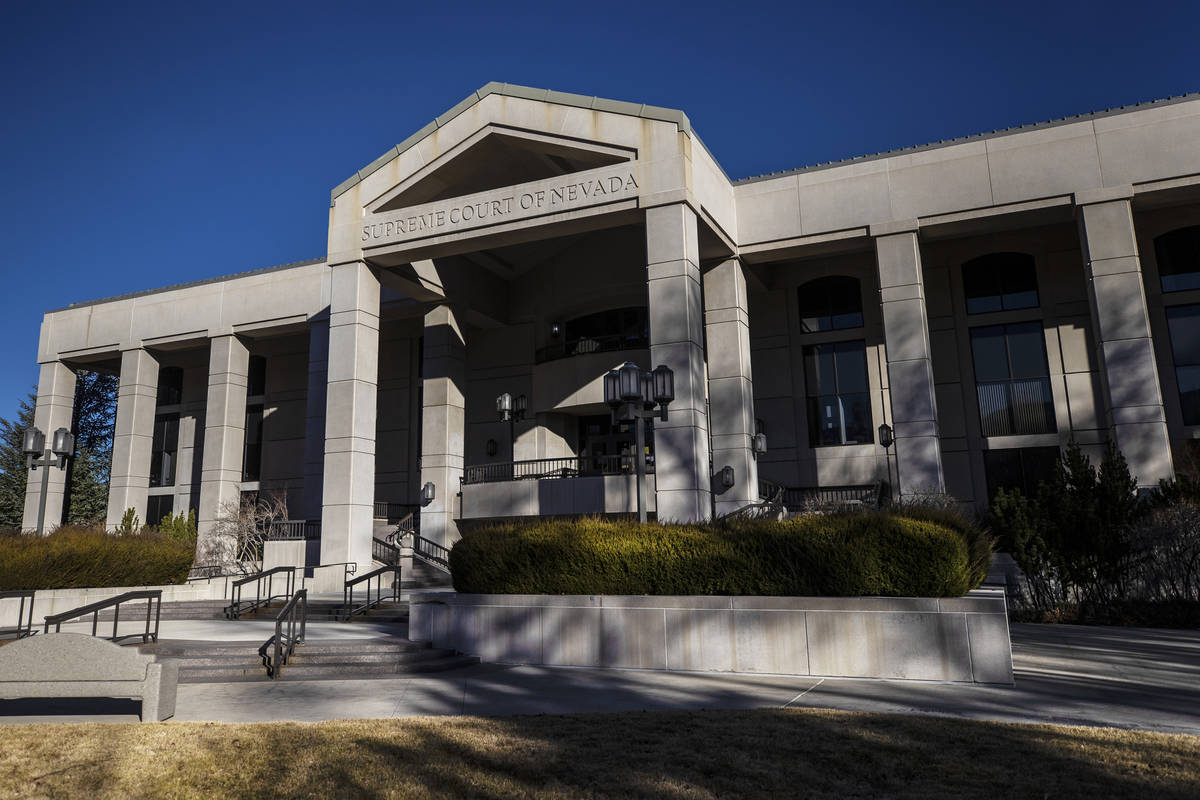 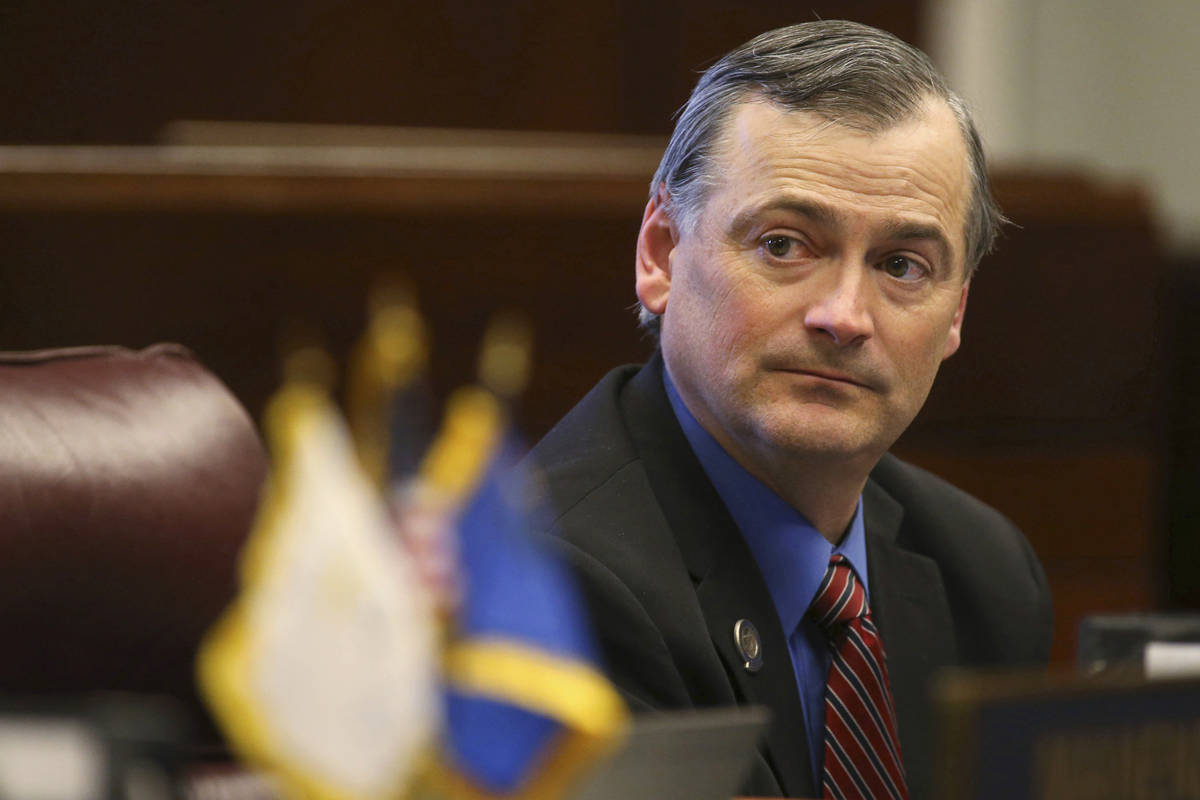 FILE - In this Feb. 27, 2013, file photo, Nevada Sen. James Settelmeyer, R-Minden, listens on the Senate floor at the Legislative Building in Carson City, Nev. Nevada state lawmakers are bound by a state constitutional requirement to reach a two-thirds majority to approve revenue-generating decisions, the state Supreme Court decided Thursday, May 13, 2021. In a decision with more than $100 million in implications for lawmakers now in session and counting on the taxes and fees in question to balance the state budget, the seven justices sided unanimously with Republican state lawmakers and rejected arguments by Democrats. Settelmeyer accused Nevada Democrat leaders of knowingly violating the Nevada Constitution in 2019. (AP Photo/Cathleen Allison, File) 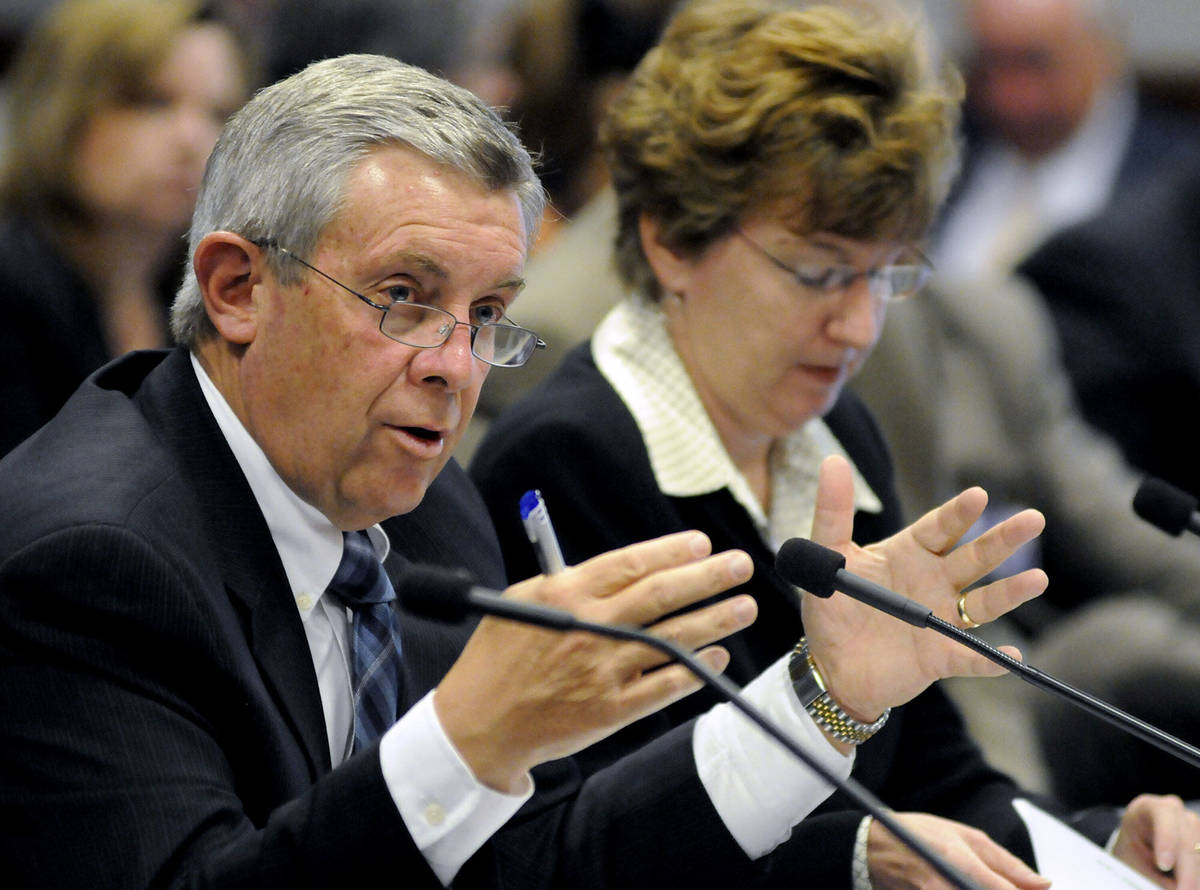 CARSON CITY — Two critical revenue bills pushed through the 2019 Legislature by the Democratic majority failed to pass with the required two-thirds majority and are unconstitutional, a unanimous state Supreme Court ruled.

The court’s decision, released Thursday, upholds a lower District Court ruling and is an unqualified victory for Republicans, who sued after the 2019 session over passage of two bills in the Senate by one vote less than the two-thirds majority. The decision will have immediate impact on revenues generated by the two-year-old legislation and on tax negotiations in the current session.

“Today’s unanimous Nevada Supreme Court ruling made one thing clear, Nevada Democrat leaders knowingly violated the Nevada Constitution,” Senate Minority Leader James Settelmeyer, R-Gardnerville, said in a statement. “This is a victory for all Nevadans. We should remember it was the voters who placed the two-thirds requirement in the state constitution, and that provision is now guaranteed.”

At the end of the 2019 session, Democrats pushed through extensions of an existing business tax and DMV license surcharge, generating an expected $105 million in revenue. Democrats had sought the revenue measures to increase funding for education, a legislative priority.

Under a 1994 voter-backed change to the state constitution, bills that raise taxes require supermajorities in both houses to pass, but Democrats argued that the tax bills merely extended existing taxes and therefore were exempt from the requirement.

The court disagreed, upholding a District Court ruling from September.

In a statement on the ruling, legislative Democrats deflected attention from the constitutional questions and instead focused on the financial impact of the lost revenue, saying the intent of the two bills had been to block “an unnecessary corporate tax cut” and fund “raises for educators and critical school safety infrastructure.”

In opposing the bills, Republicans had sought to “protect the bottom lines of some of the state’s largest corporations at the expense of Nevada schools,” Assembly Speaker Jason Frierson and Senate Majority Leader Nicole Cannizzaro said in a joint statement, accusing Republicans of “partisan politics.”

Assemblywoman Robin Titus, R-Wellington, the Republican minority leader, said the decision “is consistent with the intention of the law — to protect citizens from unfair taxation.”

The Clark County Education Association, the bargaining agent for some 18,000 teachers within the Clark County School District, called for a bipartisan solution to any possible education funding shortfalls as a result of the decision.

“CCEA believes given the Supreme Court’s decision on the modified business tax, it is incumbent on Republican and Democratic lawmakers to work in a bipartisan way to secure additional funding for our K-12 education system,” the union said in a statement.

The challenge involves Senate Bill 551 and Senate Bill 542 from the 2019 session. SB 551 extended existing rates under modified business tax past a planned July 2019 sunset date, generating some $98 million. SB 542 extended for two years a $1 technology fee motorists pay to the DMV that was set to expire last July. That fee generates about $7 million.

The bills in question passed the Senate on party-line 13-8 votes. They initially came to the floor for a vote with standard tax bill disclaimers indicating that that they required a two-thirds majority. After they were voted down in that form, the bills came back before the Senate 15 minutes later without those disclaimers.

The eight Republican senators filed a lawsuit after the session was over. Republicans picked up one seat in the Senate in the 2020 election; the partisan split is now 12-9 in favor of Democrats.

Taxes to be repaid

The Supreme Court upheld a decision by Carson City District Judge James Todd Russell, whose ruling from the bench after a 90-minute hearing in September also required the state to pay back wrongfully collected revenue to taxpayers with interest. The amount at stake is likely to be in the tens of millions of dollars.

Besides forcing the state to repay already-collected taxes with interest, the decision will have an impact on the pending state budget now before lawmakers for the two-year cycle that starts in July. Gov. Steve Sisolak’s proposed executive budget to lawmakers included revenue from the two taxes.

“After today’s ruling from the Nevada Supreme Court, we will continue to work with legislative leadership on budget implications and State officials will analyze the decision to determine next steps,” the governor said in a statement reacting to the decision.

Business groups added as plaintiffs in the case that paid more because of the 2019 tax extension praised the ruling, citing it for upholding “the will and intent of the Nevada people when it comes to increasing taxation.”

“Our organizations speak for hundreds of thousands of Nevada employees and their employers, and we will continue to advocate and remain vigilant in our defense of their rights and interests in our government,” the Retail Association of Nevada, Nevada Trucking Association, Nevada Franchised Auto Dealers Association, and the National Federation of Independent Businesses said in a statement.

“When a small business gets involved in this kind of lawsuit, you’re worried about some kind of repercussion from lawmakers or the governor,” Dutra said. “I’m not politically connected — I just believed in the cause.”

Dutra said his company of around 40 employees paid about $30,000 in “unfair taxes” over the past two years.

“I could understand if it was passed with the supermajority, in a bipartisan way, but lawmakers weren’t following the Constitution,” he said. “You can’t let the government control your life like that.”

Any tax revenue returned to Kimmie Candy will be invested in the business, Dutra said.

“It’s not something like I’m going to go out and buy a new car or something,” he said. “Anything we get will be used to create more Nevada jobs.”

The two-thirds provision was conceived in 1994, as then-Assemblyman Jim Gibbons circulated the measure while he was running for governor against Democrat Bob Miller. Miller won the election, but the two-thirds measure passed overwhelmingly that year, and again in 1996, when it became part of the state constitution. (Gibbons would later be elected governor in 2006 and serve a single term.)

The two-thirds measure was the subject of controversy in 2003, when the Legislature, hamstrung over taxes to fund schools, failed to complete its business on time and was sued by then-Gov. Kenny Guinn. A different Supreme Court parsed the constitution and concluded the Legislature could simply ignore the measure and pass taxes by a simple majority.

That controversial ruling was later overturned after it was roundly criticized. Lawmakers eventually found enough votes in 2003 to pass the tax package with two-thirds, despite the court’s ruling.

Other tax plans — including the commerce tax passed in 2015 when Republicans controlled both houses of the Legislature and the governor’s mansion — have always mustered two-thirds.

Jeff Stempel, a law professor at the William S. Boyd School of Law at UNLV, said he opposes statutory supermajority requirements for promoting “minority tyranny,” said the ruling focused too narrowly on the wording of the constitutional change and not its likely intent.

“When people voted for this in 1994 and 1996, did they really think that it needed a supermajority to change a licensing fee?” Stempel said. The law was more likely aimed at major tax changes, he said.

“I think there’s some ambiguity, but I think you can certainly read the background as saying the two-thirds requirement was supposed to be for big, significant things,” he said. “It wasn’t supposed to apply to things like fee increases. Under this opinion, does that mean the Legislature can’t close a loophole without a two-thirds majority?”