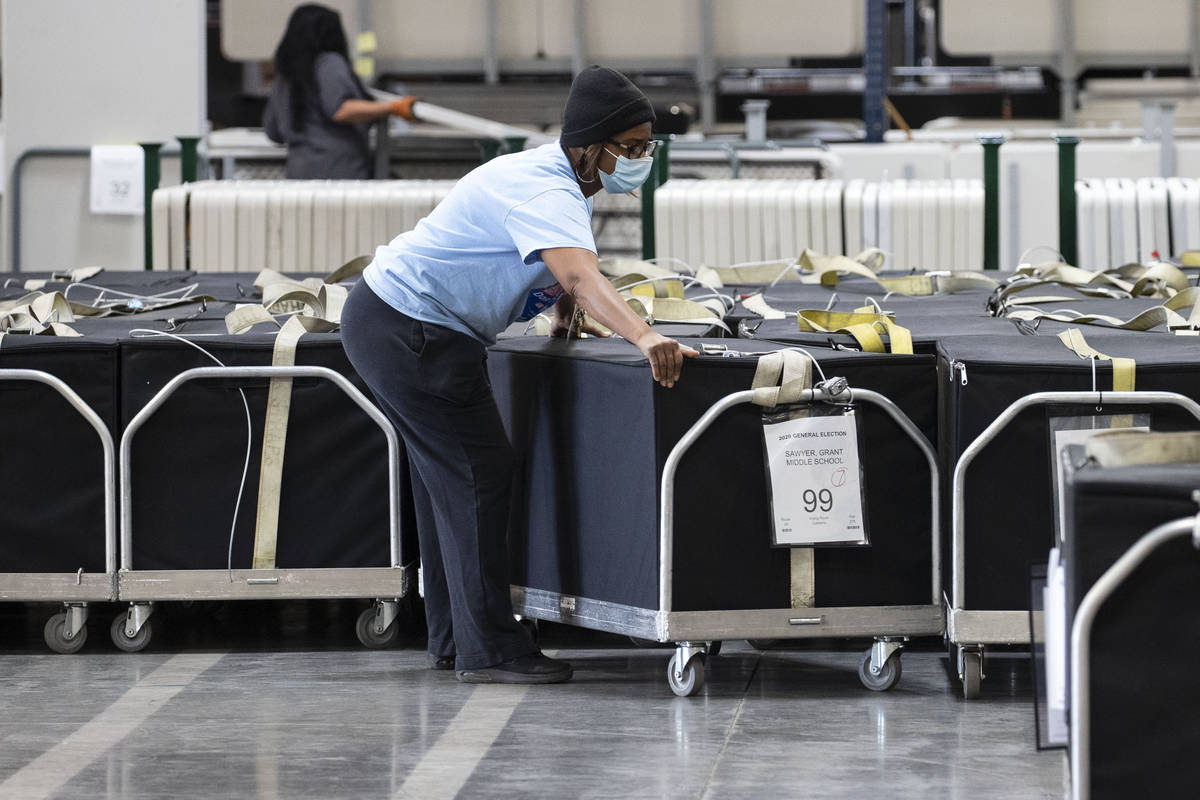 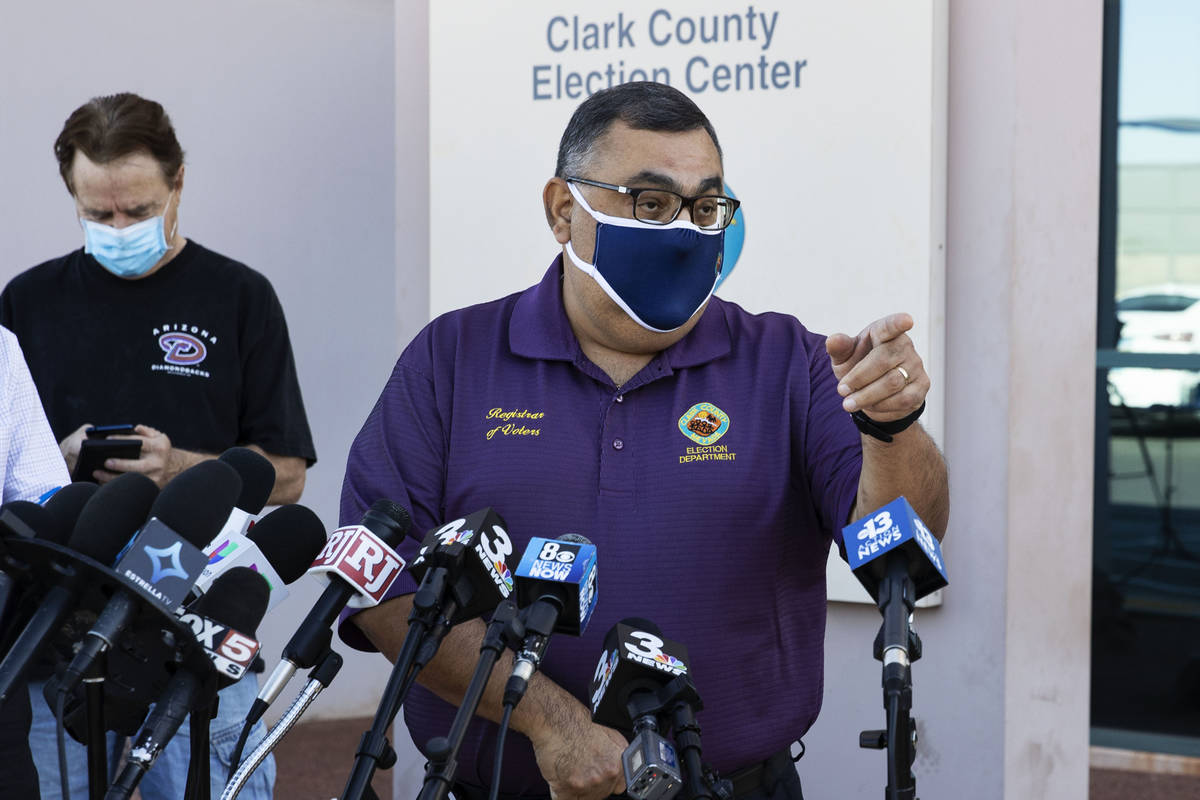 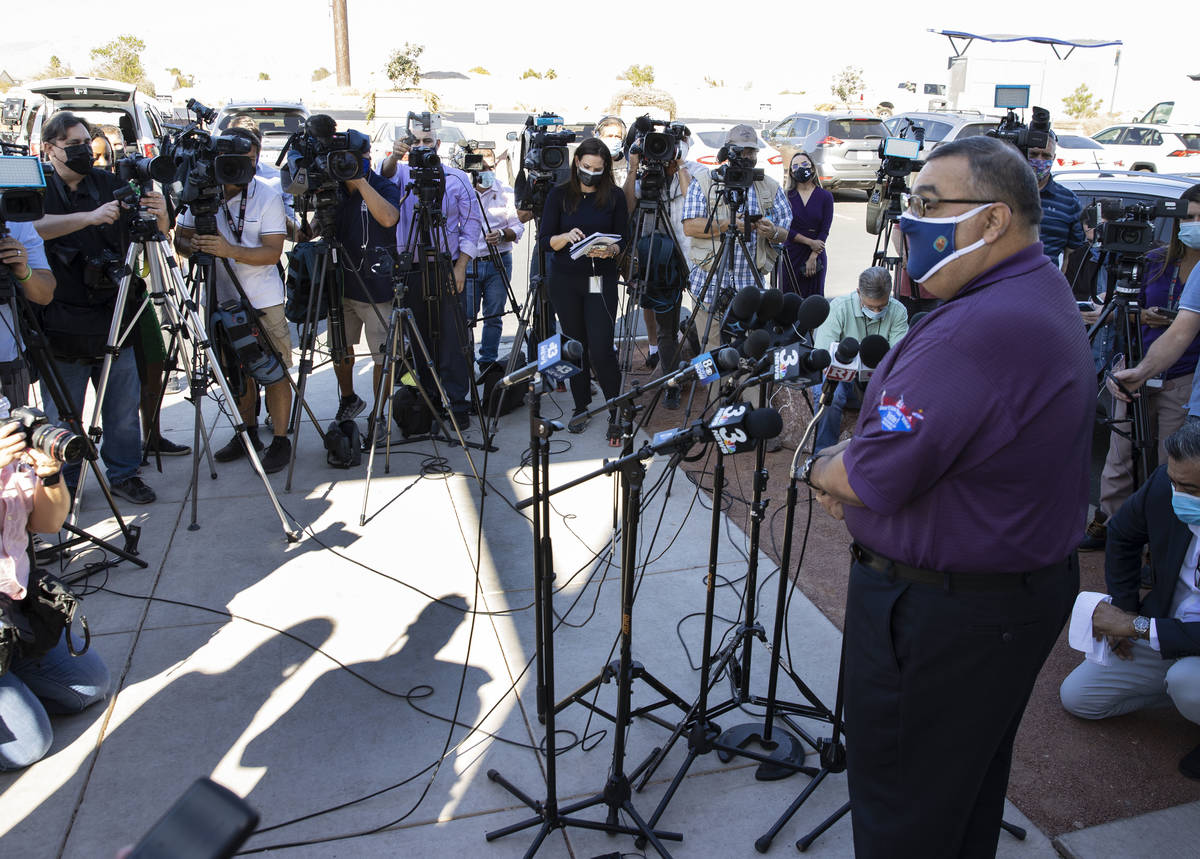 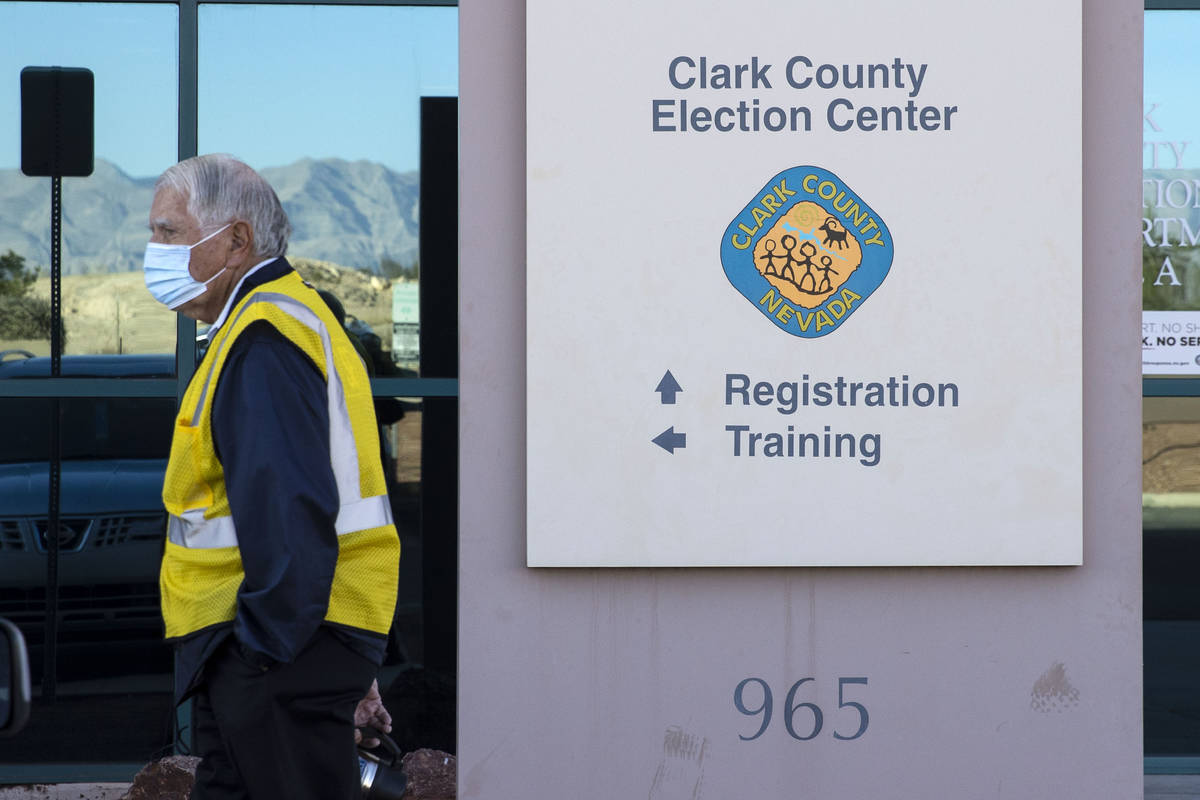 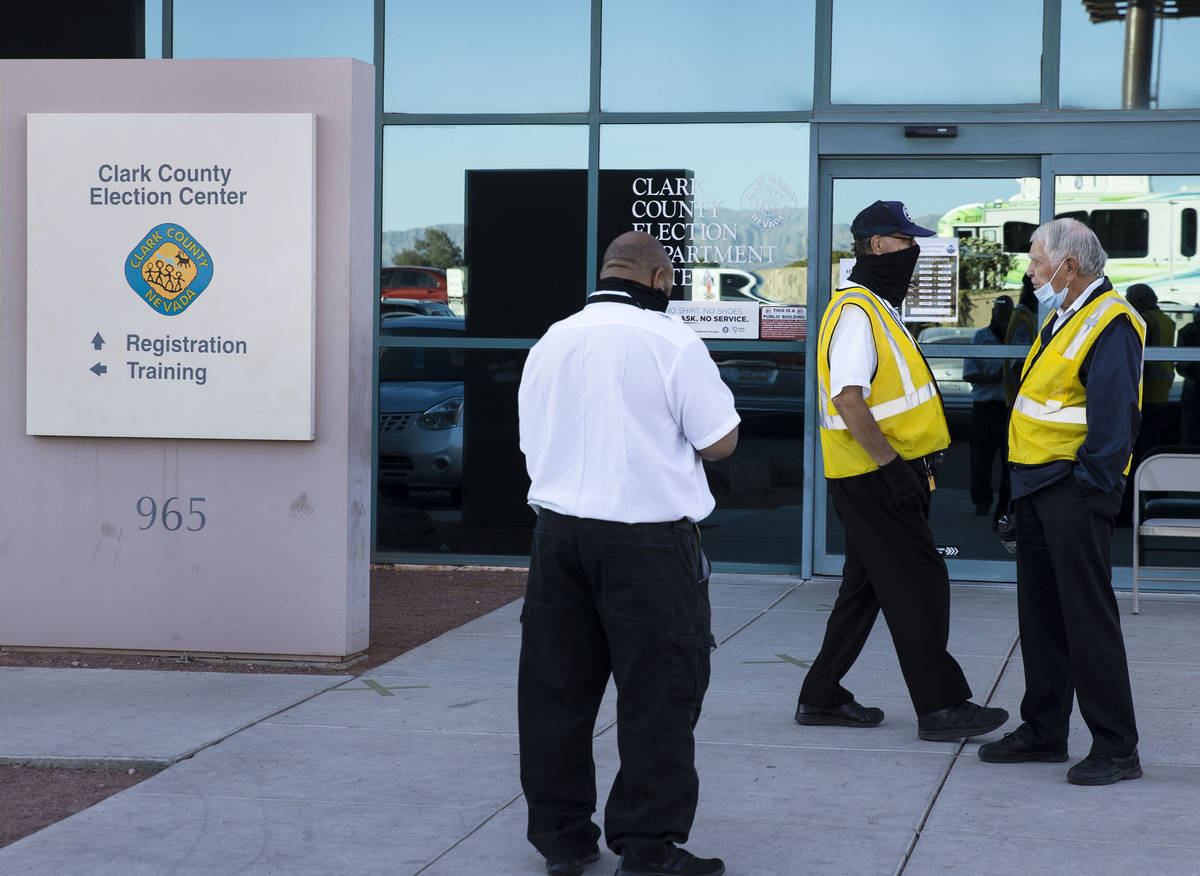 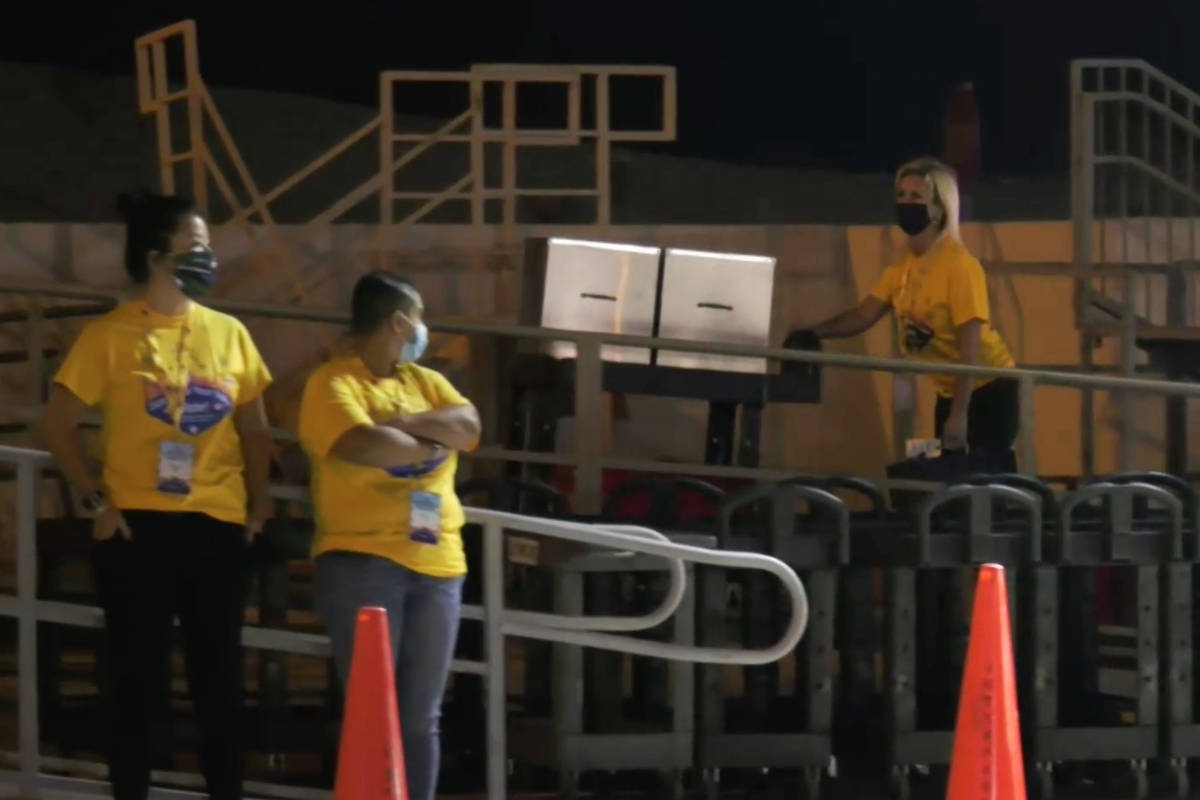 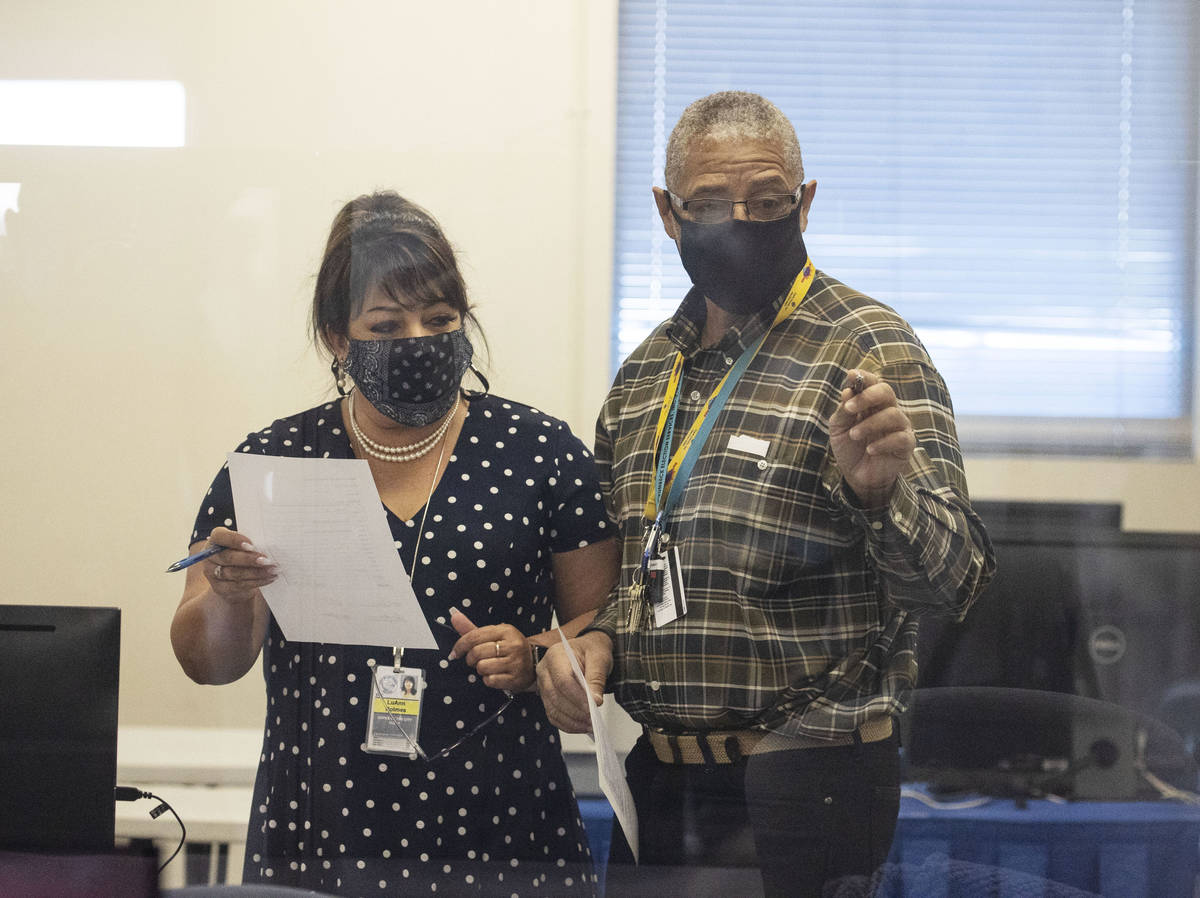 After being interrupted by a man shouting election conspiracy theories, Clark County Registrar of Voters Joe Gloria told media that the county will provide an update on election numbers on Thursday morning.

Gloria explained the process of counting ballots in Clark County and said there had been no issues with the ballot counting.

He also said he will provide the latest voting numbers from Clark County at a 10 a.m. press conference Thursday and will continue to provide new numbers at 10 a.m. every day thereafter.

During his news conference, Gloria said the Thursday morning results update will include all mail ballots received up until that point. He declined to speculate on how many total ballots that will be.

He did, however, mention the Election Day results factor in some 337,000 mail ballots. According to the Secretary of State’s voter turnout summary, updated early Wednesday morning, Clark County has received 413,000 mail ballots.

The county will continue to count ballots from overseas voters, disabled voters and some provisional ballots filled out by new Nevada residents, as well as any mail ballots postmarked by Election Day and received by Tuesday.

Gloria said there have been no unplanned disruptions to the counting process, and his team is able to count about 70,000 ballots per day.

The registrar said he has guaranteed the county commission that the final vote canvass — the last step to officially certifying the election — will begin on Nov. 16.

Gloria also responded to a question regarding a Republican accusation that the county is not allowing for “meaningful observation” of the counting process, saying some observers have had to be removed because they were not following Nevada state laws that disallow them from speaking to staff or leaving the designated observation areas. Some had been rude to staff or fellow observers.

Later in the day, Washoe County Registrar of Voters Deanna Spikula told media that Washoe County would not be posting new election results until Thursday morning.

Nevada election officials statewide planned to spend Wednesday counting “tens of thousands” of mail-in ballots that could sway the outcome in critical races, including the presidency.

“The difference between Biden and Trump is close to 9,000 votes,” said Wayne Thorley, deputy secretary of state for elections. “I don’t know the number of outstanding mail-in ballots, but we are in the tens of thousands range. It absolutely could change (results.)”

A tweet from the Elections Division of the Nevada secretary of state early Wednesday said more results won’t be announced until 9 a.m. Thursday.

“That’s it for election results updates until 9:00 am on Nov. 5,” elections officials said in the tweet. “Here’s what has been counted so far:

— All in person early votes

— All in person Election Day votes

Thorley said the decision to report the tally on Thursday morning was made so that local county elections officials would not be disrupted as they count the ballots throughout Wednesday.

The mail-in ballots are counted using electronic scanners. Thorley said every county in Nevada is counting the ballots Wednesday and asking for periodic updates throughout the day could impact timeliness and accuracy of the counts.

He also said the number reported Thursday morning will not be the final vote tally for Nevada.

The elections division said the votes left to count include:

— Mail ballots that will be received over the next week.

“Ballots outstanding is difficult to estimate in Nevada because every voter was sent a mail ballot. Obviously, not all will vote,” the elections division said in the tweet.

Here’s what is left to count:

Ballots outstanding is difficult to estimate in Nevada because every voter was sent a mail ballot. Obviously, not all will vote.

They are finding Biden votes all over the place — in Pennsylvania, Wisconsin, and Michigan. So bad for our Country!

They are working hard to make up 500,000 vote advantage in Pennsylvania disappear — ASAP. Likewise, Michigan and others!

The president resumed tweeting Wednesday about the votes being counted, complaining that votes for Biden were being “found all over the place.”

As of Wednesday afternoon, Nevada was one of five states where The Associated Press has not declared a presidential race winner.

The other states were Georgia, Pennsylvania, Alaska and Maine.

Nevada gets six electoral votes, while Georgia has 16; Pennsylvania, 20; and Alaska, 3. Maine divides its four votes by congressional district.

As of Wednesday afternoon, Biden led in the popular vote, 70.4 million to Trump’s 67.3 million.