RJ App
Vegas News, Alerts, ePaper
OPEN
Why are so many White House journalists pregnant? A look at the "Trump bump." 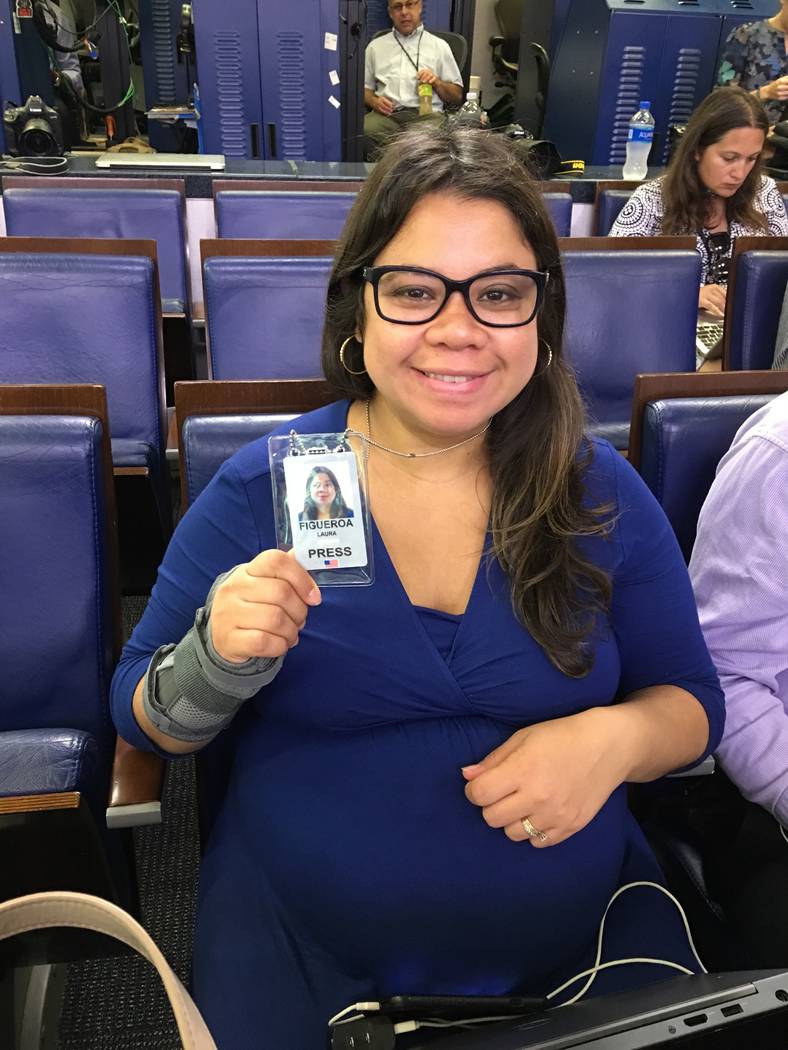 For the second year in a row, the number of pregnancies in the Trump White House press quarters defies all norms. Call it the “Trump bump.” Laura Figueroa of Newsday just returned from maternity leave. (Debra J. Saunders) 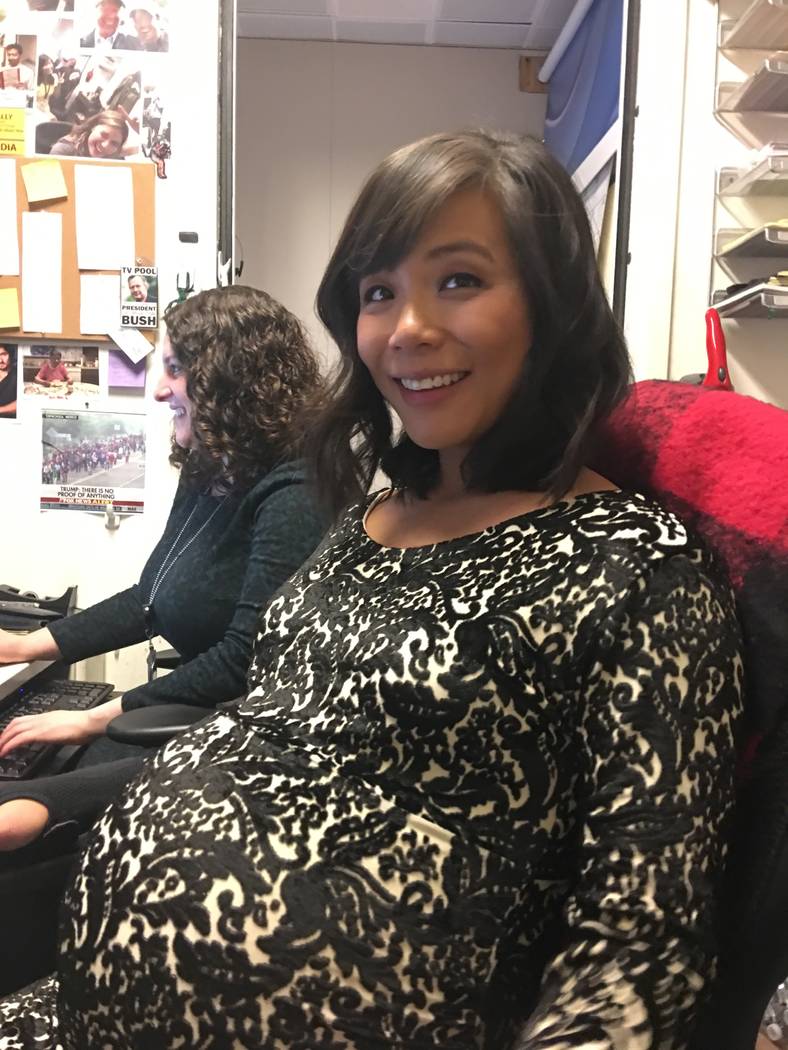 For the second year in a row, the number of pregnancies in the Trump White House press quarters defies all norms. Call it the “Trump bump.” CBS White House correspondent Weijia Jiang is due in January. (Debra J. Saunders) 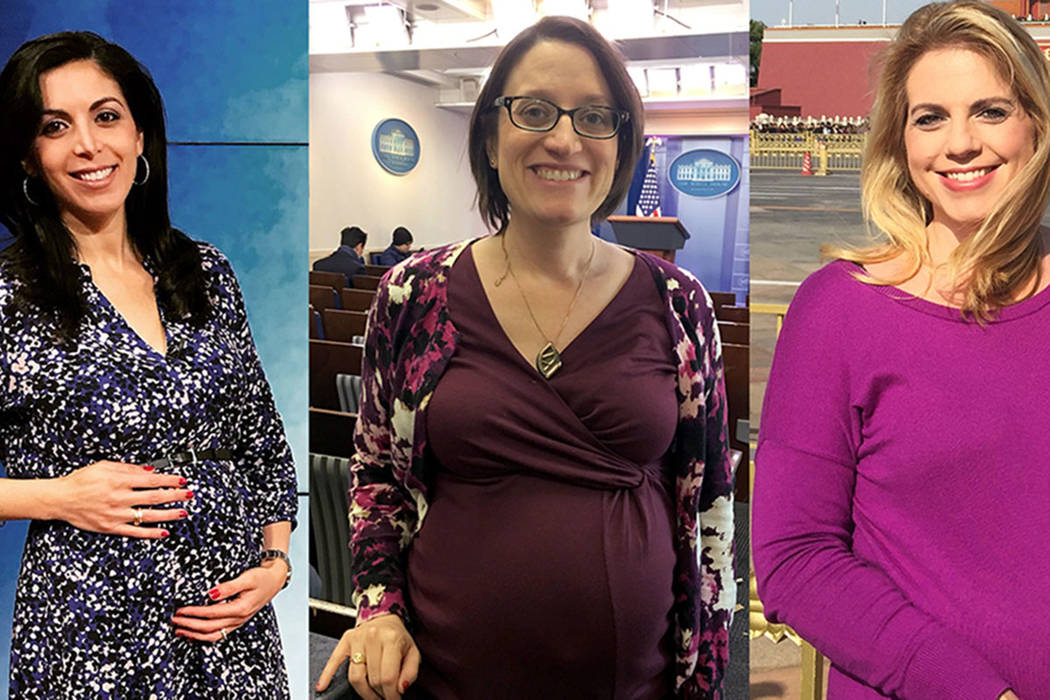 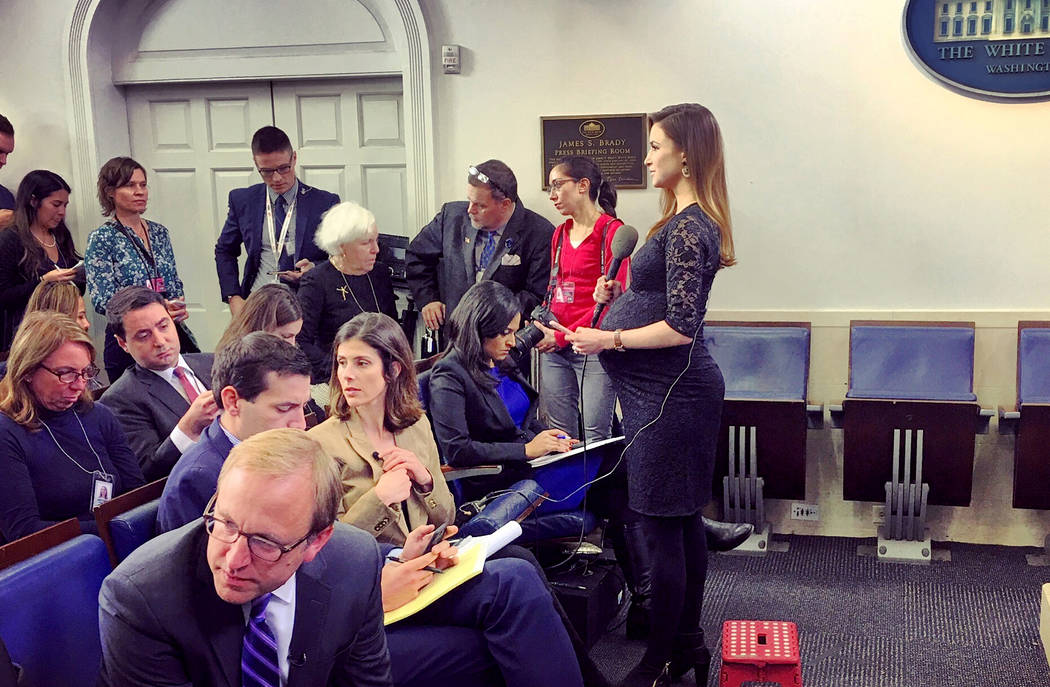 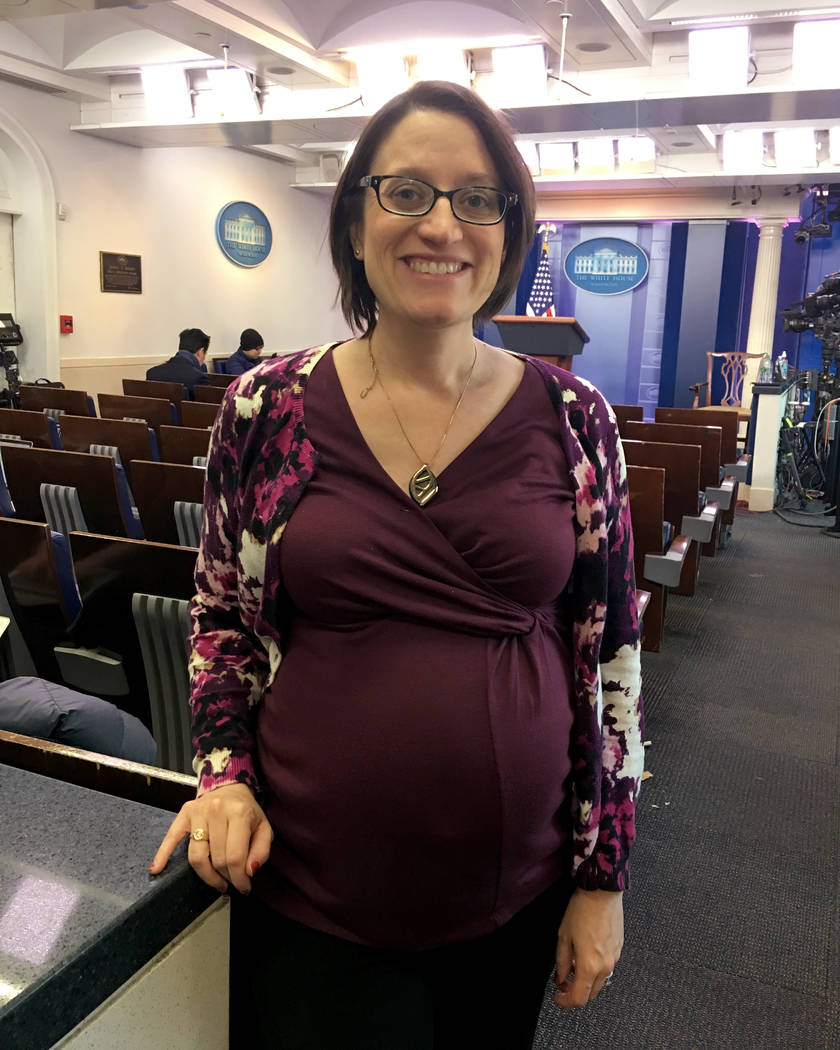 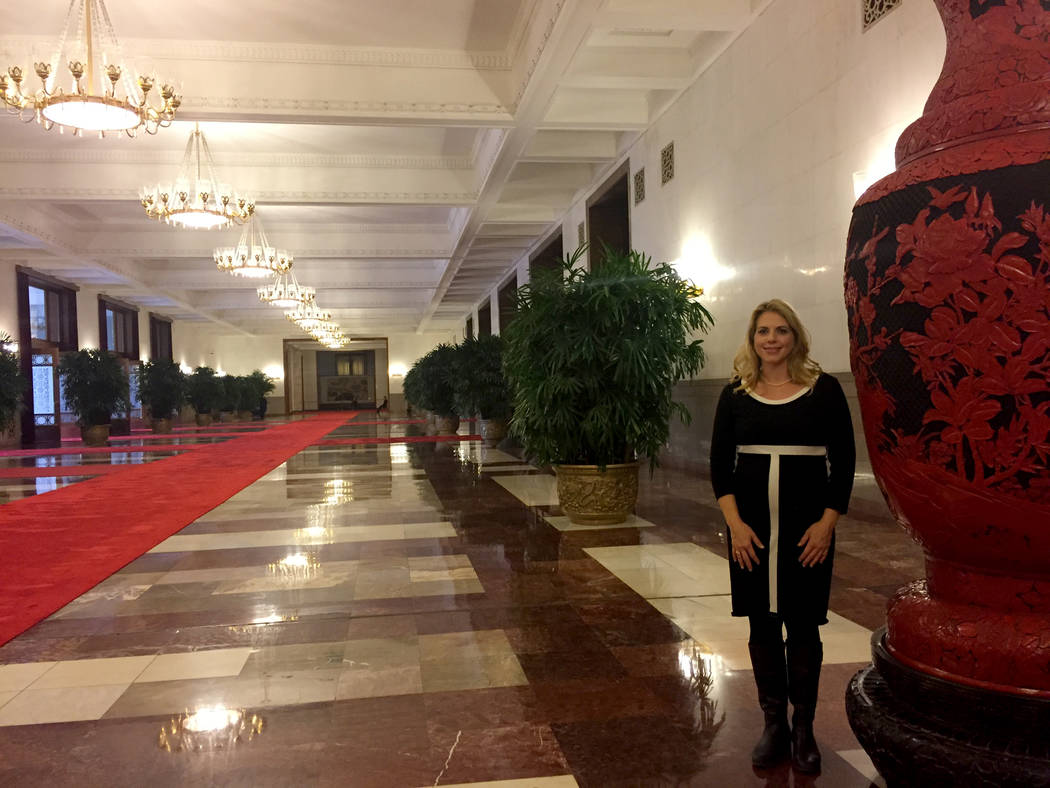 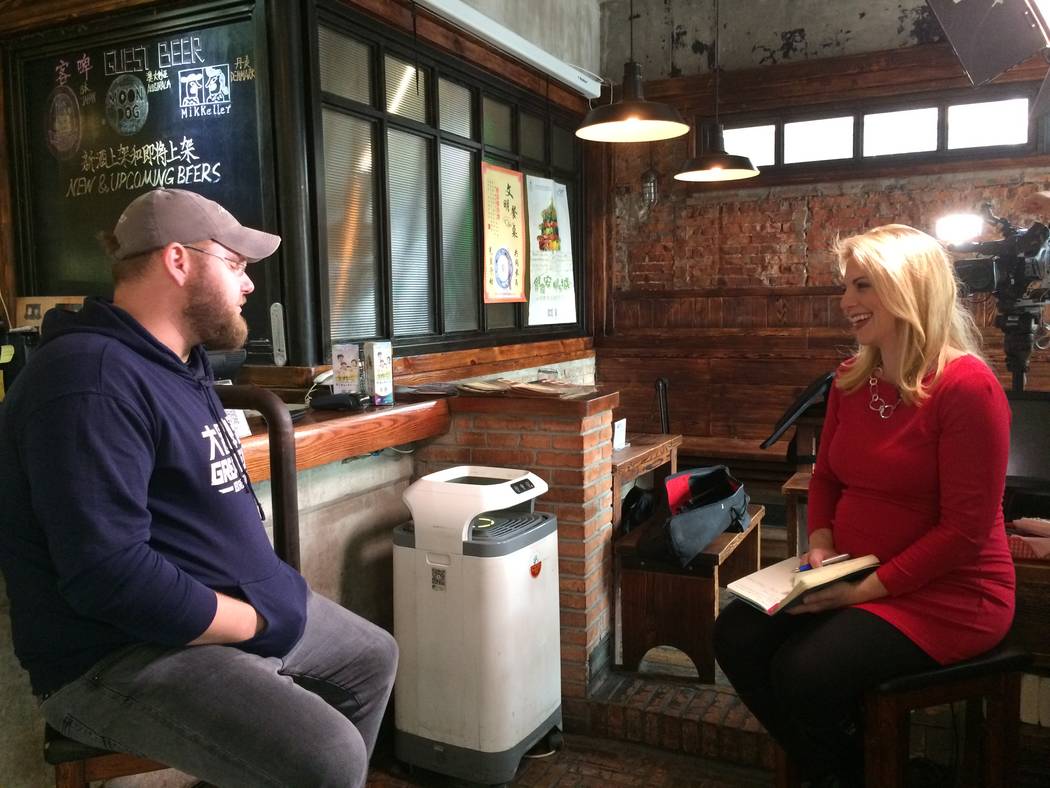 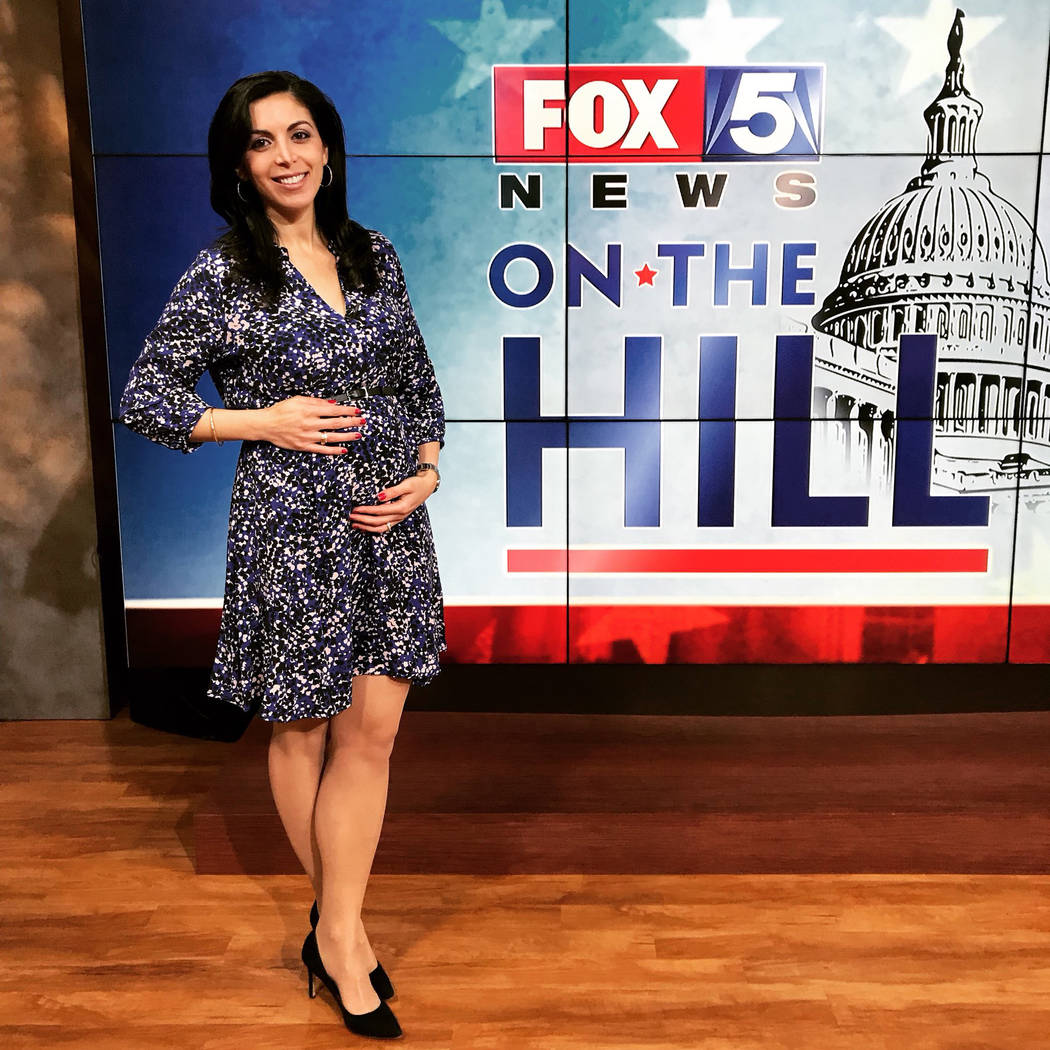 Ronica Cleary, a reporter with Washington, D.C., station Fox5, is shown with her baby bump in a photo posted on her Twitter page with the caption “Take-your-bump-to-work-day!”. (Twitter)

WASHINGTON — For the second year in a row, the number of pregnancies in the Trump White House press quarters defies all norms. Call it the “Trump bump” — a sign of journalist fecundity that should be the envy of fertility clinics.

In the tight working space and 49-seat James S. Brady briefing room that surround what used to be the White House swimming pool, proof abounds.

There are others as well, including a publicity-shy reporter and those not yet showing.

This much is clear to Stone, a second-time mother covering her second president: “I’ve never seen as many moms at the same time” within the press confines.

Start with a group of professional women whose careers are in a secure moment as they feel their biological clocks ticking.

Add a short window — between the 2016 and 2020 election cycles — to conceive and bring a child into the world.

And then there is, as Jiang recognized, the fact that the job is “stressful.” So, she added wryly, “There’s more de-stressing.”

What’s it like to cover the Trump White House when you’re doing everything for two?

“I’ve been pregnant the whole time,” Jiang confided about her tenure covering the White House. In the early days, she said, “there were times when I forgot I was pregnant.”

No empty seats today. Briefing running late. Most days I don’t mind, but today I’m less than enthusiastic about the nature of a room full of people who avoid offering a seat to a woman who is 37 1/2 weeks pregnant. I wouldn’t accept it, but that’s not the point. #ThisIsDC @fox5dc pic.twitter.com/0oZOMG2DKo

Figueroa recalls more of a slog — morning sickness, fatigue, aches and pains — during her first two trimesters. At times she would have to stand for as long as 90 minutes before and during what used to be daily White House briefings.

When she wasn’t showing, who would even think to offer her a seat?

And it’s not as if competitors are quick to offer up their coveted chairs. At one point, Ronica Cleary, then with Fox 5, tweeted, “Most days I don’t mind, but today I’m less than enthusiastic about the nature of a room full of people who avoid offering a seat to a woman who is 37½ weeks pregnant.”

No hiding the bump

Jiang announced her pregnancy shortly after she asked Trump a question at a New York news conference in September. There was no hiding the bump. As Jiang repeatedly pressed Trump about accusations that he had sexually harassed multiple women, he told her to “sit down.”

Jiang used the moment to announce her pregnancy to the public on social media. In the same tweet she said she can’t wait to teach her daughter that “when a man orders you to ‘sit down’ because he doesn’t like what you’re saying, do anything but:).”

Personal news: She made a very public debut during this presser, so it’s a good time to share my husband and I are thrilled to meet our baby girl in January! Can’t wait to teach her when a man orders you to “sit down” because he doesn’t like what you’re saying, do anything but 🙂 pic.twitter.com/dZ7QiUYhlt

During a recent conversation in the CBS news pod, Jiang noted, “I was glad (Trump) didn’t treat me different from the other reporters.”

“It’s harder than you think it will be,” NPR’s Keith said. And yet, there is cause for boasting.

“I have pumped on Air Force One,” Keith said. How many people can say that?

There’s camaraderie in the new motherhood.

Keith put together a list of instructions for breast pumping in the White House, where the pump room doubles as office space for CBN, the Christian Broadcasting Network. If a CBN staffer is in the space, the nursing mom asks that person to leave.

Keith scoffed at any hint that she expects sympathy: “There are people with hard jobs and inflexible hours. This is not a hardship post. We’re lucky to have these jobs.”

“If you’re working on an assembly line, it’s probably a lot harder” to pump, she added.

Reuters’ Steve Holland, who has covered five presidents, deadpanned, “There’s such a baby boom going on at the White House press corps that we are always on standby for delivering a baby if necessary. It would be a new theme for us, but hey, we’re open to the challenge.”

If there’s a downside, it’s that while you’re having a baby, you’re missing the story.

“It’s kind of nice to be back,” said Figueroa as she recalled feeding her daughter and watching cable news. Now, she said, she doesn’t feel as if she is missing the action anymore.

Like Jiang, CNN’s Pamela Brown was pregnant when she got the White House gig, and she credits supportive network for getting her through the rough patches — most notably insomnia. But Brown said she didn’t plan her pregnancy to bypass the presidential campaign season and noted that “there’s no right time to have a baby.”

And, Brown said, once she did have her baby, she “unplugged totally.”

“I was so excited about being a mom that I didn’t care about anything else but my baby,” she said.

It turns out not following the news nonstop wasn’t really a problem. With the Trump White House, “so much changes every day, it didn’t really matter,” Brown said. “If I had to do it all over again, I would handle it the same way.”

“It felt very much like going from 120 mph to 0 mpg overnight,” she noted in an email. “But I feel really blessed to have gotten the chance to cover an amazing beat and also be with my kids this season.”