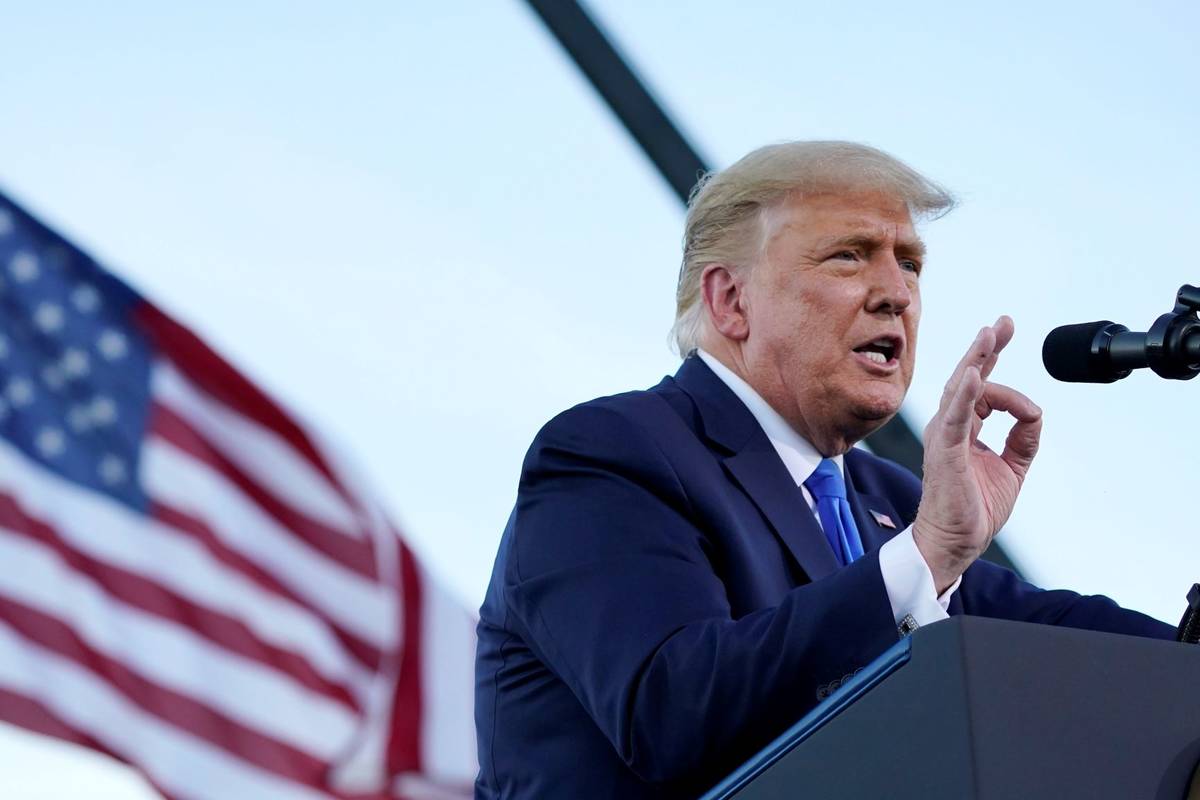 WASHINGTON — President Donald Trump will hold a rally at Laughlin/Bullhead International Airport on Wednesday — a venue across the border in Arizona because of Gov. Steve Sisolak’s social distancing orders that cap Nevada public gatherings at 250 people.

Asked about political rallies at a media briefing on COVID-19 Monday afternoon, Sisolak said that he supports people participating in political events, but “if you’re coming to Nevada as a guest, follow our protocols.”

Nevada GOP Chairman Michael McDonald told the Review-Journal that the campaign had been searching for an outdoor location near Las Vegas, but because of the governor’s “very aggressive OSHA team,” the campaign chose to book the location for the rally across the state line.

“He has such a large following in Southern Nevada and also in Nevada, this could be possibly one of the largest rallies he has ever held,” McDonald offered.

Democrats criticized Trump for the event.

“In yet another display of his backward priorities, on Wednesday, Donald Trump will hold a rally billed to Nevadans in Arizona,” Nevada State Democratic Party spokesperson Madison Mundy said in a statement. “Despite Trump’s false claims that we are ‘rounding the corner’ on coronavirus, his visit coincides with surging numbers of coronavirus cases in Nevada and across the country, as his chief of staff admits the Administration has given up on controlling this pandemic.”

“After rushing through a nomination process, today, Senate Republicans are set to confirm Trump’s Supreme Court nominee, who will be the deciding vote to overturn the Affordable Care Act,” she added. “Trump has imperiled Nevadans for far too long. In eight short days, Nevada voters will send Joe Biden and Kamala Harris, leaders who will protect our health care and get this pandemic under control, to the White House.”

After Trump’s last area indoor rally attended by thousands at Xtreme Manufacturing in September, the city of Henderson fined the business, owned by Trump ally Don Ahern, $3,000 for violating a state order limiting public gatherings to 50 people at the time.

On Tuesday, Trump will stump in Michigan, Wisconsin and Omaha, Nebraska, before landing in Las Vegas to spend the night. While the White House does not release details of where the president plans to overnight, Trump likes to use the eponymous Trump International Hotel in Las Vegas as his Western overnight headquarters when he campaigns in Nevada, Arizona and other Western states.

After the Laughlin rally, Trump will head to Goodyear, Arizona, for another rally.

Other campaign visits this week

She will hold a “voter mobilization event” in Reno at 1:30 p.m. that will be livestreamed, with a similar Las Vegas event planned for 5:30 p.m. The locations of each were not shared publicly.

Harris last campaigned in the state on Oct. 2, when she hosted a drive-thru rally at UNLV. Democratic nominee and former Vice President Joe Biden held a similar event in Las Vegas the following week, as the duo looked to hold smaller, socially distanced appearances during the ongoing COVID-19 pandemic.

In addition to Trump and Harris, Vice President Mike Pence will make a campaign stop in Reno this week.

Pence is scheduled to speak at a rally in Reno on Thursday afternoon at Reno-Tahoe International Airport. The doors open at 3 p.m. and the rally begins at 5 p.m.

Trump scrubbed plans for a Reno rally in September after the Reno-Tahoe Airport Authority told the owners of the private hangar where the rally was scheduled that doing so would violate their lease. Trump ultimately rescheduled that rally for an airport in Minden in Douglas County.